It was a languid, chilly, overcast day, much like many in the West Marin, Point Reyes, Tomales Bay area. A harbor seal cruised slowly about, occasionally poking its head above the waters, while each of the telephone pole-size sticks poking out of the water near the pier seemed to have either a sea gull or a cormorant sitting atop the pole. On the pier, a motley group of youngsters, aged, I would guess, about eight to fourteen were either minding their own crab pots or checking the crab pots of others.

It was a pretty tame scene until the pincers of a small rock crab pinched one of the younger boys. He yelled out the f-bomb and then crushed the small crab under his heel. The other youngsters began to criticize his act when a young girl, not part of the larger group began to sing.

Madori, for that was her name, seemed almost angelic as she sang the pretty spiritual “Amazing Grace” while the group listened in silence. When she finished they stood in awe and asked where she had learned to sing. Church was the answer and the group began to follow her around as she checked each of her nets. Small crabs were carefully returned to the water and a couple that were legal and destined for the table were transferred to the bucket. 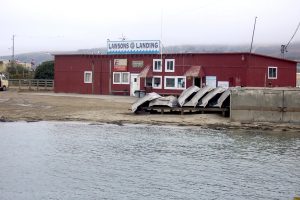 All were visitors to the small pier at Lawson’s Landing, youth who had ventured away from the substantial fleet of motor homes and trailers parked in the campground. Madori was from Los Banos and glad to escape the valley heat. The rest of the group, destined to be friends for a few days, came from a variety of towns. Such is life in this heavily visited spot located near Sand Point, at the entrance to Tomales Bay

Lawson’s Landing can be a surprisingly productive spot for anglers. But it also can be far too popular. On summer weekends, and especially on holiday weekends, there is often a long line of cars headed into the campgrounds. The result may be nearly impossible parking and a pier jammed with anglers. However, the pier and its angling is only of secondary interest here. Lawson’s Landing is a popular place to launch a boat and is used as a headquarters spot by many. Angling just outside the bay offers good bottom fishing and, seasonally, good salmon fishing. Tomales Bay itself offers fairly good halibut fishing during the summer months. Many, many anglers also flock to this area to try for clams during good low tides. For a few bucks the clam-seekers can ride the clam-barge out to clam-rich areas of the bay.

Environment. The pier is located on the north side of the bay, just down, less than a quarter of a mile, from the ocean entrance into the bay. The bottom is almost all sand with somewhat limited vegetation (although currents can push in quite a bit of salad). Dependent upon the tides, the current can be weak or strong, generally sweeping perpendicular to the pier. There is considerable barnacle growth on the pilings but very few mussels. Much more of an attractant to fish is the location itself as fish move into or out of the bay. Two negative items do exist; the first is the amount of boats and the second is the size and condition of the pier. Most boats depart or arrive directly adjacent to the pier. Not only does this limit the area you can cast into but also disturbs the fish—and I have long felt the more boat action in an area the less fish you will catch. Finally, the pier itself is small and decrepit and a launching dock fronts the end. As a result, you can only fish on the sides—and it can be very crowded. In particular, this is a good crabbing area and crab pots may be tied up every two feet along the railing. When conditions are such, try down the beach. 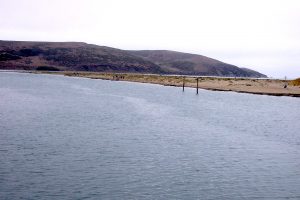 This pier offers a variety of fish to anglers. Probably the number one fish caught numerically is smelt or more properly jacksmelt and topsmelt. Much of the year will see consistent catches of smelt day after day. Less frequent, but caught in large numbers when present, are Pacific herring. Also common are a variety of surfperch: primarily walleye, silver and white, but also a few black, pile, redtail and rubberlip perch. Unfortunately, small shinerperch will also throng around the pier during summer months and attack bait intended for their larger brethren.

At times, generally during the summer, schools of kingfish (white croaker) and Pacific tomcod will also move into the area and offer good fishing. Along with these are such bottom fish as sole, turbot, flounder, sand dabs and halibut—although most halibut caught on the pier are under legal size. This is also a better than average area for both sharks and bat rays but since the pier is closed at night few are landed at the pier.

Fishing Tips. Best bet here are any of four riggings. The first would be a bottom fishing outfit trying for perch or other bottom fish. Use a high/low leader, size six or four hooks, and use fresh mussel, live pile worms, clams or ghost shrimp. For large perch, fish from winter to late spring and fish on either side of the pier. For sharks, skates and rays, use a similar high/low leader equipped with larger hooks, size 2 to 2/0, and heavier line—at least 30 pound test. For these, the best bait would be either squid or live shrimp. Fish the left side of the pier, away from the launching ramps.

The next rigging would be a commercial multi-hook rigging. If smelt are present, cast out and reel in slowly using a herky-jerky motion. Sometimes simply jigging up and down near the surface of the water will also produce fish. The smelt are generally near the surface and quite often dash out from underneath the pier or dock and grab the hook just as it nears the surface of the water. Similar tackle and action can bring in nice catches of herring but usually they will be deeper in the water, near the bottom or at the mid-depth area.

Similar rigging is achieved by tying several size 8 hooks directly to your line. Fish near the top using small pieces of pile worms for jacksmelt, fish near the bottom using small pieces of anchovy for walleye surfperch and silver surfperch. Slowly retrieve it along the bottom (if there isn’t much vegetation) for small soles, turbots and sand dabs. The problem with this rigging is that it is also loved by shinerperch and staghorn sculpin. In fact it can be almost impossible to keep them off your line during summer and fall months.

The last rigging would be a sliding sinker bottom leader. Fish this with a size 4 to 2 hook and either pile worms, live shrimp or small fish such as shinerperch or smelt. The result can be a nice flounder or halibut—although more common will probably be sharks and rays.

As mentioned, this is a great pier for crabbing. It is almost unbelievable the number of crabs caught here considering the small size of the pier and the huge numbers of crabbers who pull up net after net of crabs, of several different varieties. 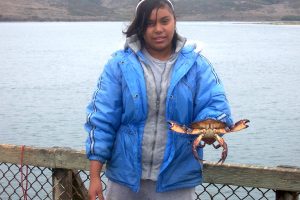 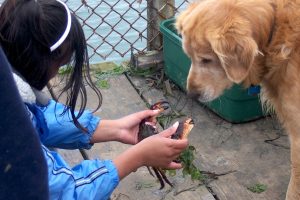 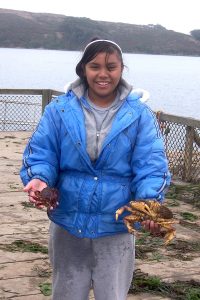 The pier is noted for its crabs

Went out crabbing early yesterday. Started out at Lawson’s Landing in Tomales. I guess I didn’t get out there early enough. When my party and I arrived there were already 15 people on the pier at least. Since this pier is very small, it made it very crowded and the people who get there first get access to the deeper water. I will say though that they were pulling up lots of dungies. Some were in crab nets and I would say a lot more on snares. I was only there for about an hour and 30 minutes and probably saw at least 15-20 legals get brought up.

Posted by The Orion

Cool! It’s surprising how many crabs are caught off that little pier. You should have seen the place on the season opener! Still, some people find a way to pull limits off that pier.

I was there on Sunday and it was DEAD… Basically because of the ripping outgoing tide making it hard to keep nets on the bottom… there was a group that had been there since early morning and they had two buckets of crab that were mostly caught on the snare. Clamshell type snares for the most part… never liked those type. I ended up with 2 dungies, two red crab, and one red rock crab. Crabbed from 11am – 6:30 pm for them… not many other crab taken during that time. MOST people crabbing there did not have a measuring device with them and I kept getting asked to measure crab….I tried to warn them but…. All crab kept were male… All crab caught were male… I netted hundreds of undersized crab and ALL of them were male… Just do that kinda stuff… My fisheries background I guess. Crab rings and snares working MUCH better than the cages… Saw locals pulling up cages near the pier and pickings were pretty slim.

Special Recommendations. This is a private pier so a fishing license is a must. In addition, bring your own bait, as only frozen bait is generally available at the nearby shop.

History Note. The history of the resort and landing goes back to the 1880s when George Dillon of Ireland moved to the area and built a hotel. Since the North Pacific Coast Railroad made a stop just four miles east at Tomales, it was logical that tourists might want to visit the nearby beach and the excellent clamming and fishing areas. Dillon soon ran a stagecoach to Tomales to pick up the tourists and his resort prospered. Today the town and beach are called Dillon Beach.

In the early 1900s Dillon sold the hotel to the Keegan family and in the 1920s Sylvester Lawson, a farmer from Woodland, and his wife Carrie, leased the hotel from the Keegans. In 1926 their son Howard purchased the resort property and began marketing it as “The Family Playground of Marvelous Marin.” Various members of the family still own and operate the resort and landing.

Hours: The landing is open 24 hours a day but the pier is generally locked at night; posted hours are 6AM to 6PM.

Facilities: This is a private area which has a user fee—$7 for day use/$10 for overnight camping. Space is available to park a motor home and stay overnight or to set up a tent. The only facility on the pier is a small fish cleaning station but near the front of the pier are restrooms, parking areas, and a small bait and tackle shop. Bait can be a problem. The bait store generally only carries frozen bait-squid, anchovies and shrimp. Since live pile worms, ghost shrimp and sand crabs work well here, be sure to bring your own live bait. However, at times fresh oysters and mussel are available near the front of the pier. Last, but not least, some years will see party boats operate from the pier for both rockcod, salmon, and combination rockcod and crab trips.

Handicapped Facilities: None. Wooden steps lead to the pier and the pier itself is small, narrow, and often congested. I don’t recommend this pier for anyone in a wheelchair.

How To Get There: Take Highway 1 to the middle of the town of Tomales. Turn west onto the road that goes to Dillon Beach. At Dillon Beach you will see a road marked Lawson’s Landing; simply follow it down to the entrance, pay your money, and stay on the road to its end at the foot of the pier.