Identification: A reason for one alternative name, shield-back crab, is that the carapace (upper shell) is shaped much like a five-pointed shield or badge (one resource describes it as like an upside down shovel) that is roughly squarish-shaped but longer than wide and with a pointed front. The entire shell is almost smooth. The legs are long, smooth and end in sharp points. Coloring depends primarily on the type of food they’ve been eating and they are primarily nocturnal vegetarians (herbivores) whose favorite food is, no surprise, kelp! Thus if eating green-colored kelp they tend to be green. If eating red-colored kelp they tend to be red. Given their diverse environments, anglers may encounter a plethora, almost kaleidoscope of colors. The dorsal (back) color can range from yellow-green to greenish-brown to brown to maroon or red. The ventral (underside) color is usually red, yellow, or reddish orange. Young crabs are brown, red, or olive green. Living among kelp, and eating kelp that helps them have the color of that kelp, provides a natural camouflage and protection against predators. 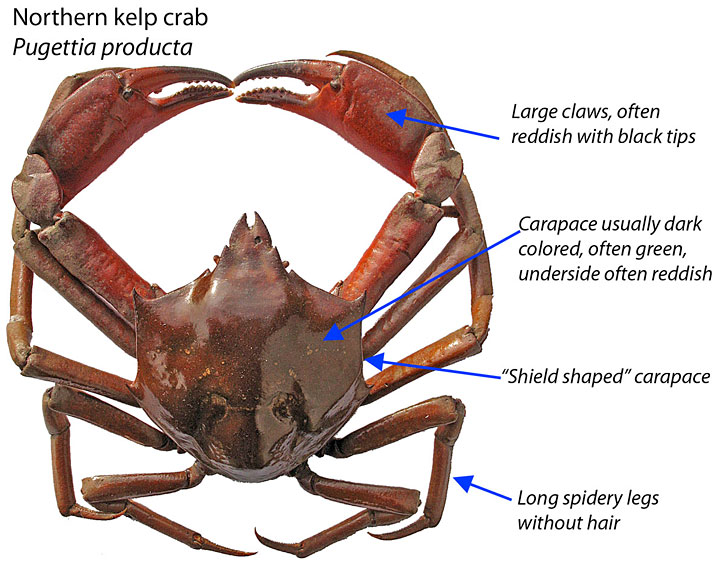 ID courtesy of Oregon Department of Fish and Wildlife

Size: Males reach 4.3 inches across the back, females reach 3.5 inches. 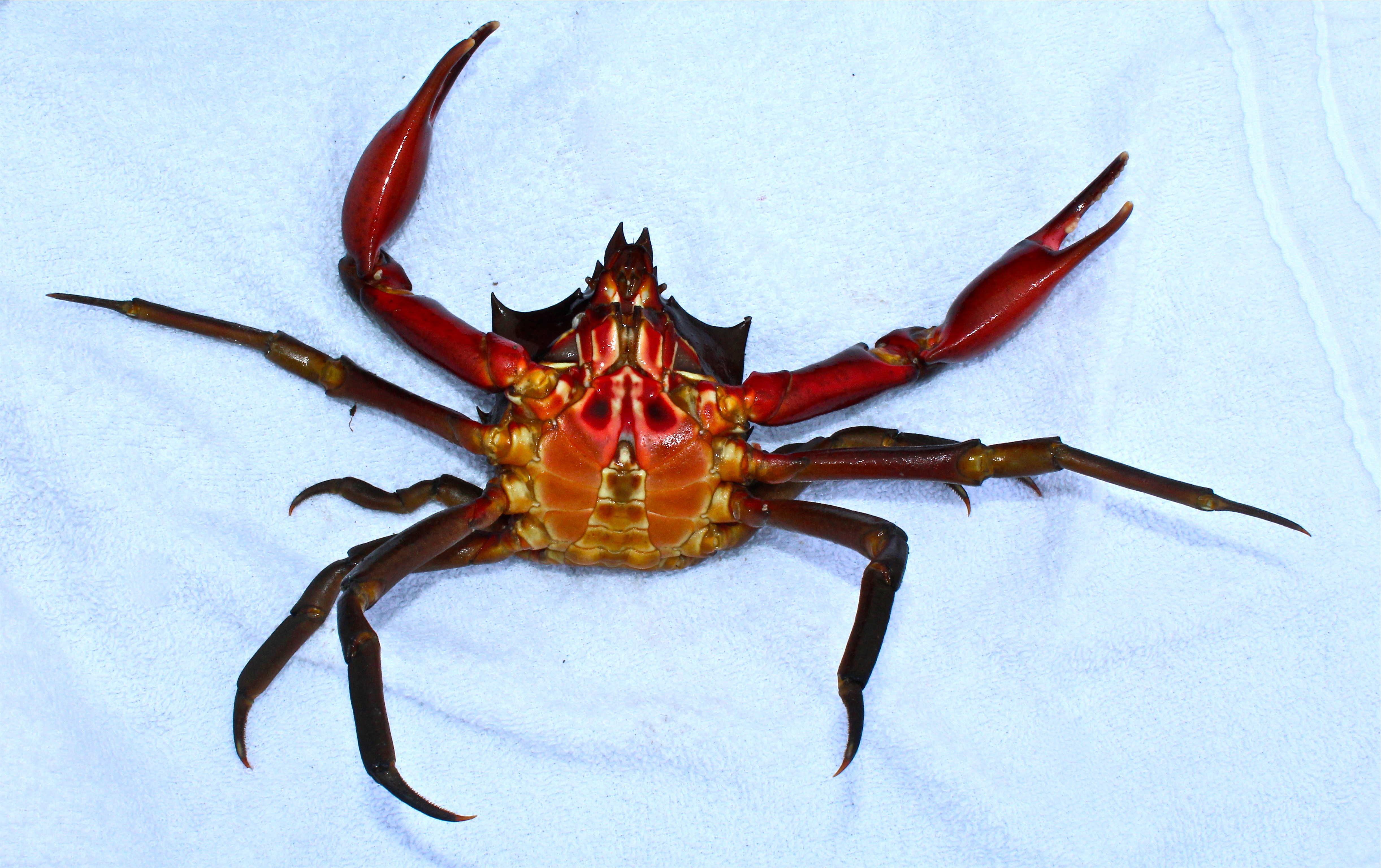 Habitat: Typically found in rocky intertidal areas, kelp beds and around structure such as pier pilings. In the fall the adults move to deeper water where they congregate, feed, and mate. Found to a depth of 240 feet. Young crabs are often in the low intertidal areas of algae and eelgrass and are sometimes found under rocks and other objects at low tide. Although kelp is their favorite food (especially bull kelp, sea cabbage and rockweed) those kelps can diminish during the winter months. At such times they will cheat on their vegetarian diets and eat such meats as barnacles, mussels, hydroids, and bryozoans. In turn, other species like to feed upon them. These include birds, other crabs, fish, octopuses, pinnipeds (seals and sea lions), and otters. 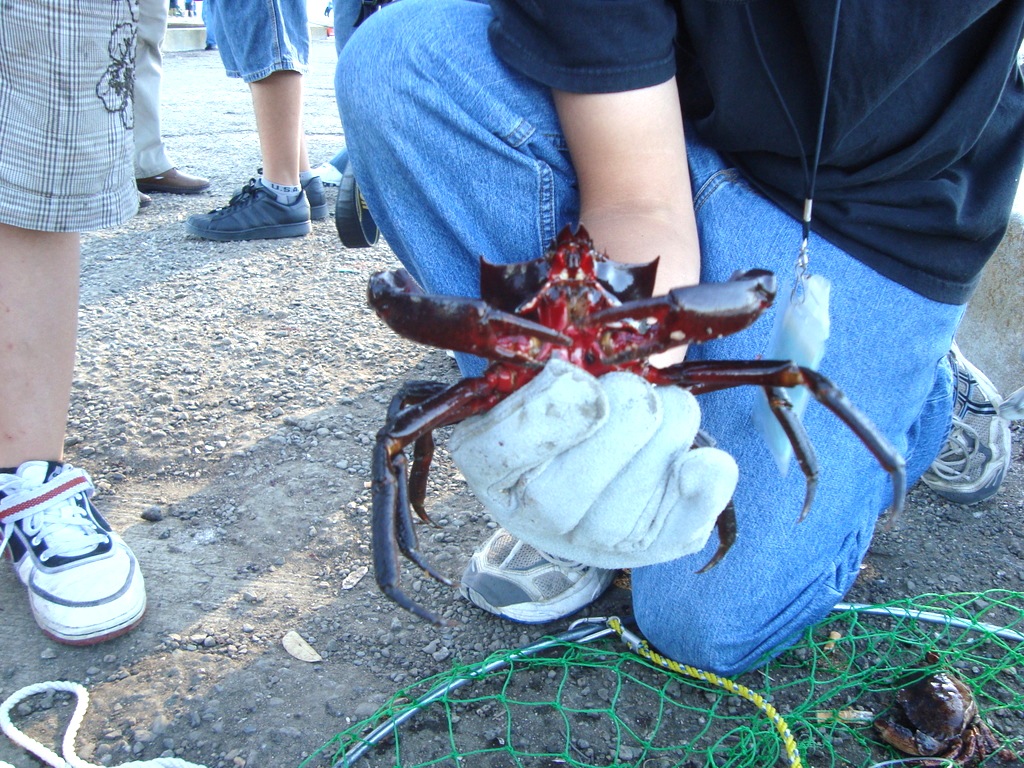 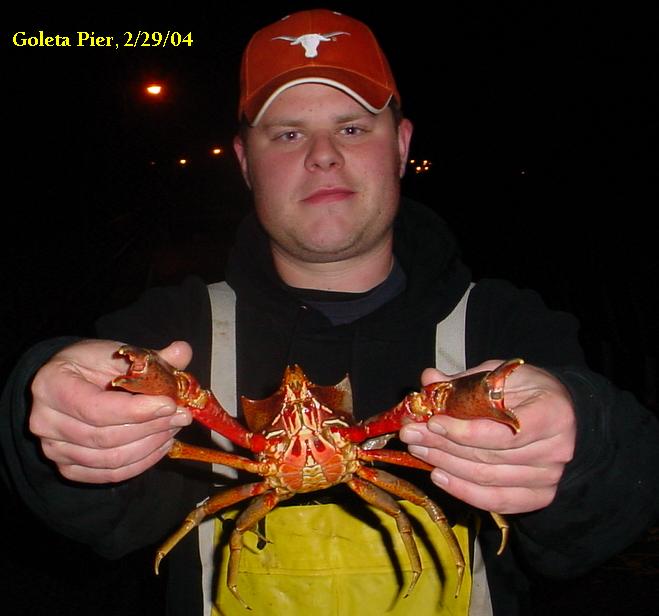 DompfaBro and a Kelp Crab from the Goleta Pier

Bait and Tackle: Taken incidentally on both fishing line and in hoop nets.

Food Value: Some claim the meat in the claws is both plentiful and sweet tasting. 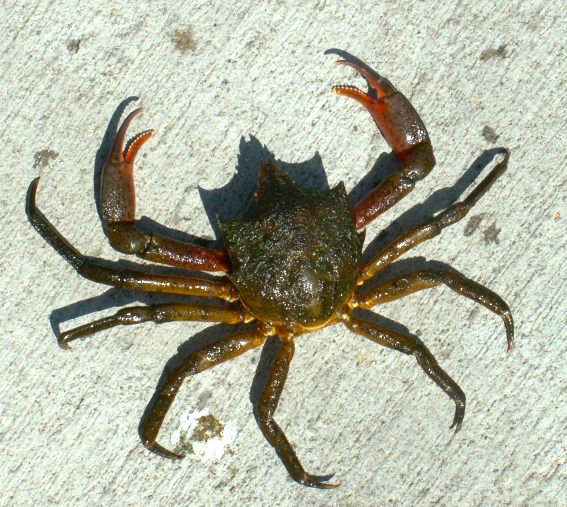 Kelp Crab caught at the Balboa Pier by Daniel 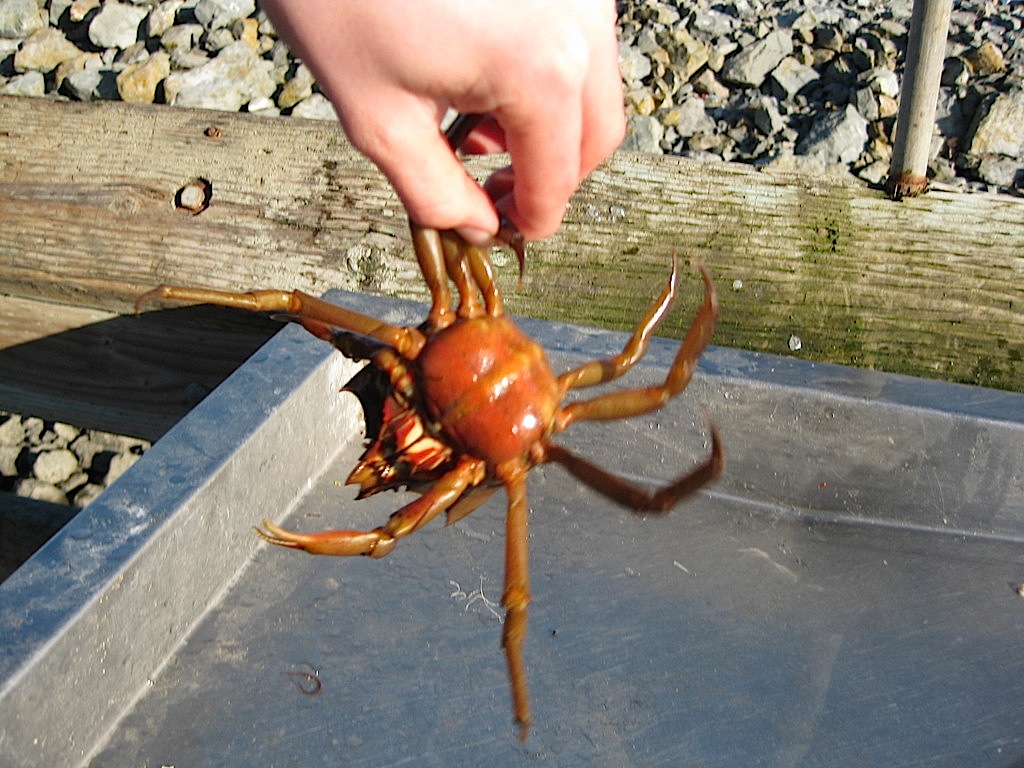 Comments: Kelp crabs seem to be the black sheep of their family. Members of the Family Epialtida fall into a group called masking crabs (see sheep crab above) and like to attach pieces of algae, kelp, and small shells to hook-like structures on their back and legs. They use this for camouflage, masking themselves against predators. However, kelp crabs rarely do this. They are larger and relatively more active than their cousins and need to keep a clean shell for smoother movement through their intertidal environment (Ricketts et al. 1985). They will however still attach small pieces of kelp to the hook-like structures on their backs. Instead of using the kelp as a mask, they save the kelp as food to be later eaten. A note of caution: although the legs look slender and harmless, the claws are very strong and adept at both grabbing and pinching a careless victim. So, be careful!