Species: Paralabrax clathratus (Girard, 1854); from the Greek words para (near) and labrax (a European bass), and the Latin clathratus (latticed, referring to the coloring on the back). 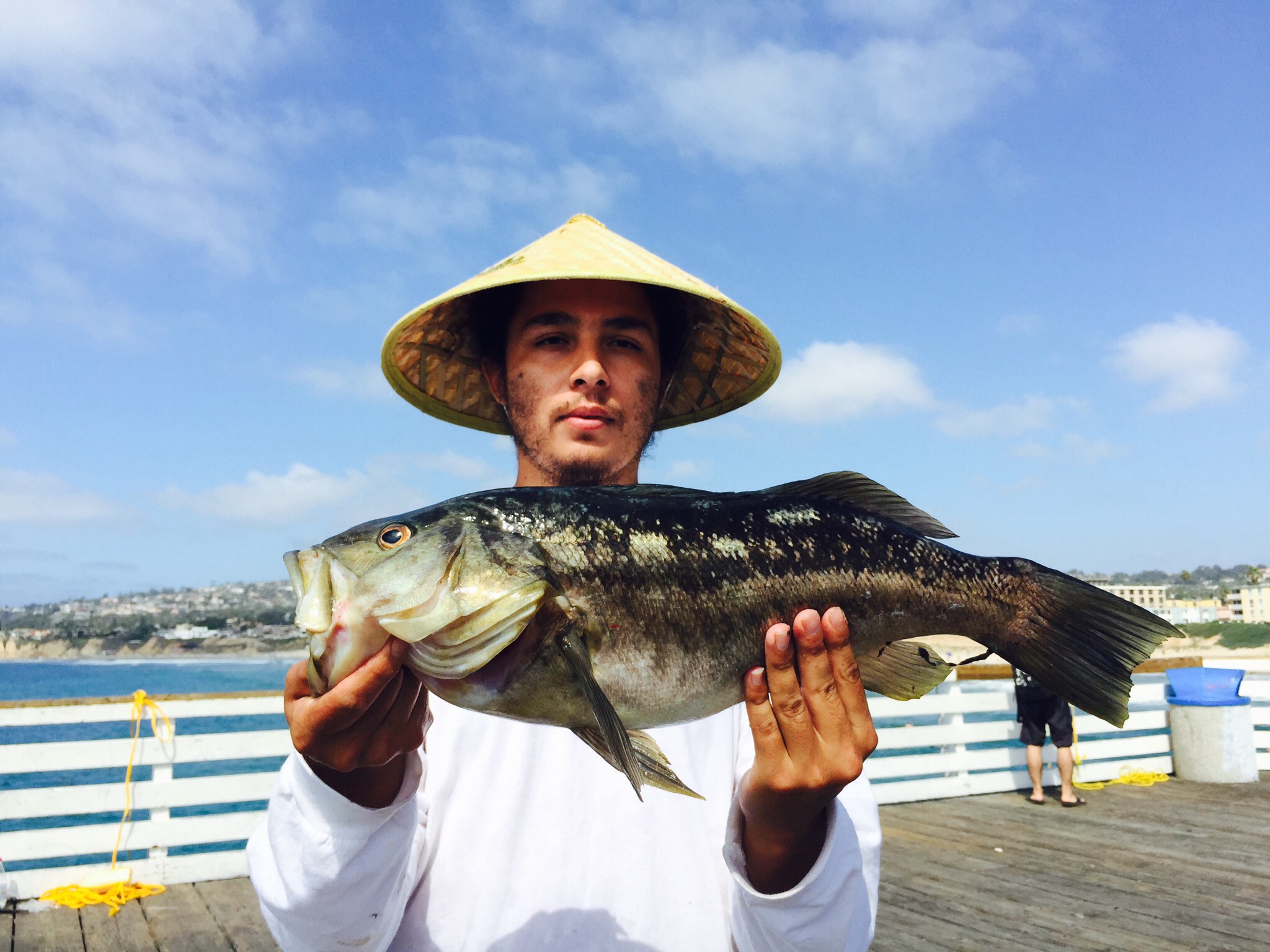 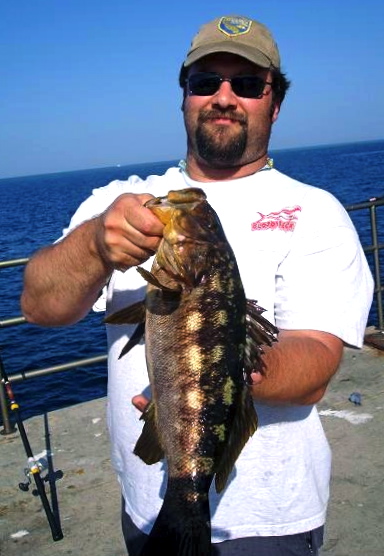 Kelp bass caught by DompfaBen at the Cabrillo Mole in Avalon

Identification: Typical bass shape. Kelp bass have a single dorsal fin notched between the sections, and the third and fourth spines are of about equal length and taller than the soft-rayed section. Their coloring is brownish or olive on the back, brownish white blotches on the uppersides, tinged with yellow on the underside, and yellow fins. 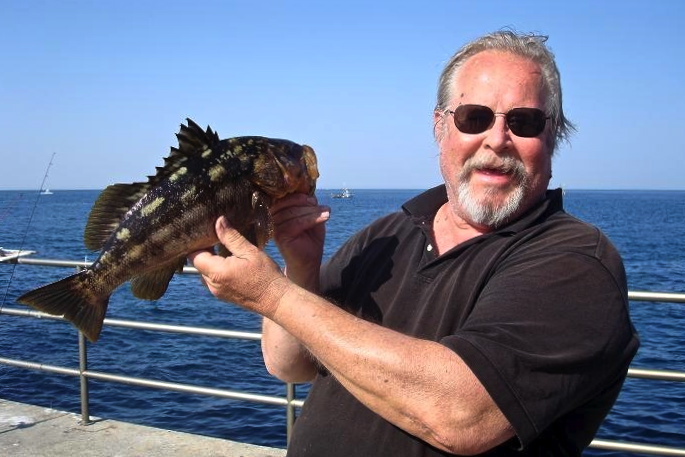 Kelp bass caught by DompfaPops at the Cabrillo Mole in Avalon

Size: Length is to 28.4 inches and weight to 14.5 pounds. Most caught from piers are less than the 14-inch minimum length and thus illegal. The California angling record fish weighed 14 lb 7 oz and was taken near San Clemente Island in 1958. The diving record is 12 Lbs 6 oz for a fish taken at San Clemente in 2012. 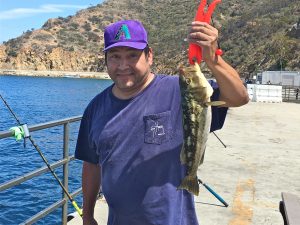 Kelp bass caught by Arcadian at the Cabrillo Mole in Avalon 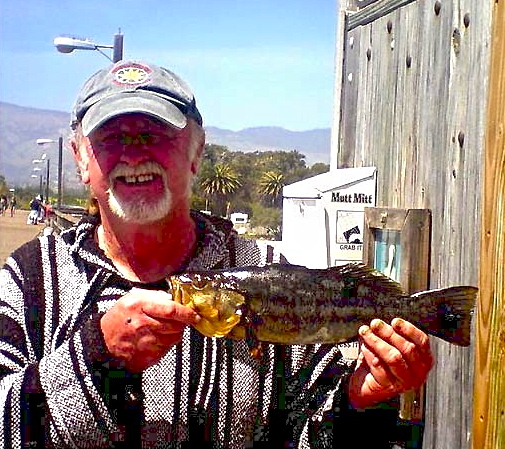 Kelp bass caught by Pierhead (Boyd) at the Goleta Pier

Habitat: Rocky areas or around kelp, from surface down to 130 feet, but common from 8 to 70 feet. Milton Love, our favorite über-marine biologist, says “kelp bass actually should be called stuff bass, because what they really like is, well, stuff. And they don’t care what the stuff is. Sewer pipes, old tires, oil platforms, chunks of sunken streetcars, it doesn’t really matter. If a kelp bass can stare at it, sort of cuddle up to it and the stuff doesn’t turn around and eat it, that’s all that counts.”

They’re reported to be diurnal (most active during the day) and are usually associated with some type of cover while shade seems to improve their ability to see and hunt. 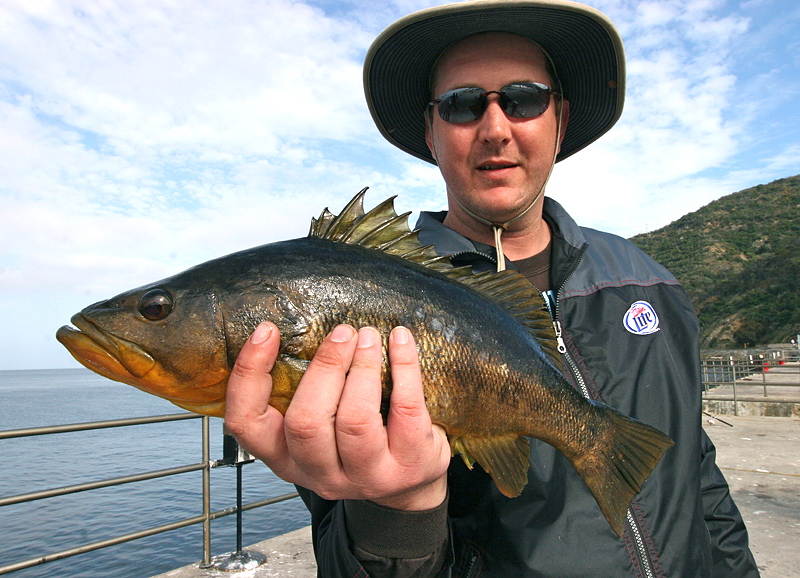 Kelp bass caught by Scott at the Cabrillo Mole in Avalon 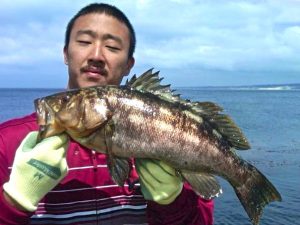 Kelp bass from the Coast Guard Pier in Monterey

Shoreline: One of the main catches for rocky shore anglers in southern California, especially if fishing near kelp. 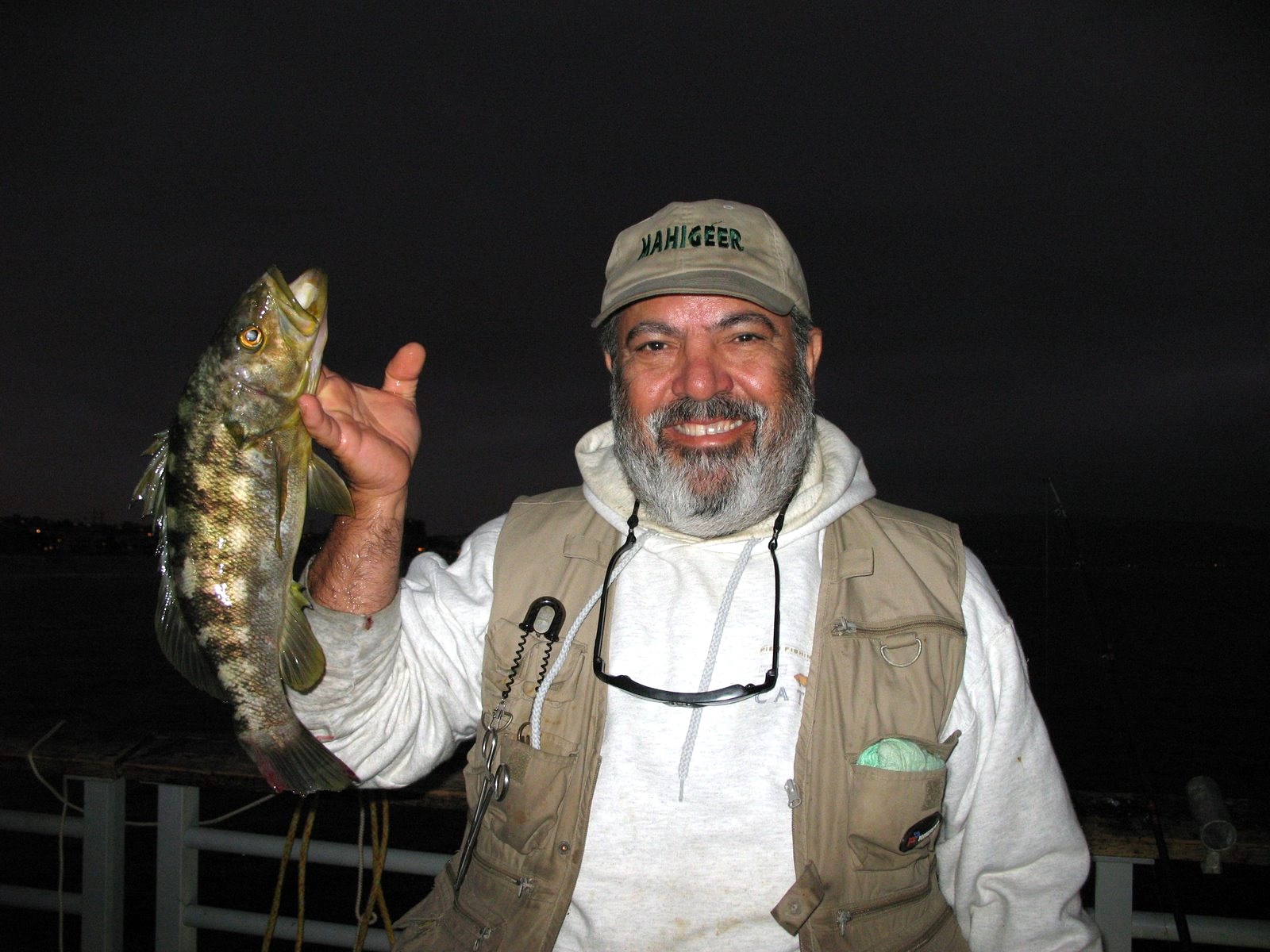 Kelp Bass caught by Mahigeer at the Hermosa Beach Pier

Boats: One of the main species for boaters in southern California. Most are taken on live bait although lures are increasingly popular. 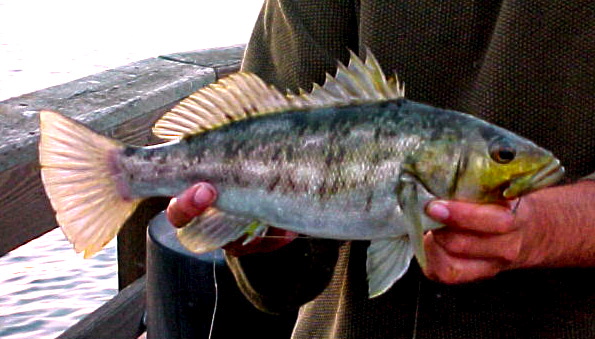 Kelp bass from the Goleta Pier

Bait and Tackle: All kelp bass are carnivorous but there are some differences in diet between the sub-adult fish and adult kelp bass. Sub-adults (the kind generally found around piers) are opportunistic feeders that feed mostly at night and grab just about anything that looks palatable whether it be smaller fish, worms or even brittle stars. Adults typically feed in the twilight hours and prefer a more piscivorous diet feeding mainly on fish—anchovies, smelt, sardines, perch, queenfish and white croaker. However, they too are opportunistic feeders and will readily feast on squid, octopus, crab, shrimp, worms and even small, juvenile lobsters when available.

Most kelp bass that are caught from piers are caught while anglers are fishing on the bottom for other species. Typical gear is a high/low leader with number 4-2 hooks. Best bait is live bait—anchovies or smelt followed by strip bait, such as anchovy, mackerel or squid. Live bloodworms, fresh mussels and ghost shrimp will also attract the calicos. Oldtimers say the best bait for the larger bass was always brown bait—a live queenfish or small white croaker (tomcod).

Today, an increasing number of pier anglers also target the bass with a variety of lures, the most popular being various swimbaits. This is most easily done at the small piers located close to the water (generally in SoCal bays and harbors). 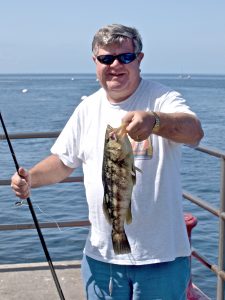 Kelp bass caught by KJ from the Cabrillo Mole in Avalon

Food Value: If you are lucky enough to land a keeper-size fish you will have a good meal. Kelp bass have a mild-flavored meat suitable to almost any kind of cooking. They can be used as fillets, baked whole, or cut into smaller pieces for deep-frying.

According to my friend Ed Ries, a popular dish at seafood restaurants in the 1920’s-‘30s was an “Individual Rock Bass,” a small kelp or sand bass served whole with its head on much like a rainbow trout. Due to the size of the plates, a 10-12 inch fish was the preferred size. Given the demand, and the fact that a commercial license could be obtained for $10, a license that permitted unlimited take, the bass were overfished and the fishery saw a dramatic decrease in the ‘40s after World War II. 87% of that bass fishery were kelp bass. Finally, in 1954, size and possession limits were established. Today, only sportsmen can keep kelp bass. 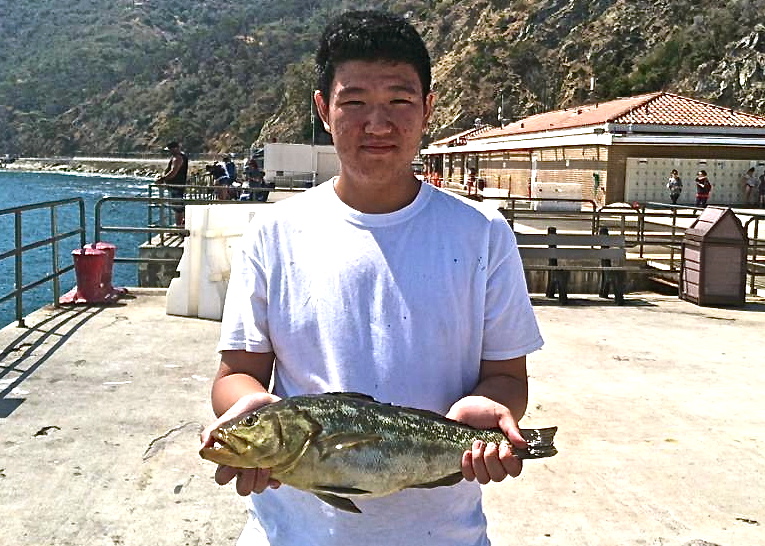 Kelp bass caught by EgoNonBaptizo at the Cabrillo Mole in Avalon

Comments: One of the favorite sport fish of southern California anglers but not really a leading species on piers. However, the number of small, immature, and illegal bass found at times around the Green Pleasure Pier at Avalon is almost unbelievable.

An interesting discussion took place one week on the Pier Fishing in California Message Board. The question was asked as to which fish was a better fighter—kelp bass or largemouth bass? With one exception, those anglers who have caught both species gave the nod to the kelp bass. The lone dissenting vote did not rule in favor of largemouth bass. He simply said that calicos (kelp bass) fight differently in open water than they do around kelp. He felt around cover they fight incredibly strong, in the open water they fought somewhat less, likening it to the fight of a smallmouth bass which he still thought was superior to that of a largemouth. 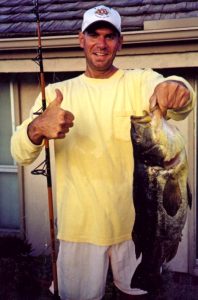