Species: Sebastes rastrelliger (Jordan & Gilbert, 1880); from the Greek words sebastes (magnificent) and rastrelliger (a rake, in reference to the stubby gill rakers).

Identification: Typical bass-like shape although they have the chunkiest body shape of the shallow-water rockfish. They are a dark colored fish—dark green or olive above; mottled green, black or gray on side; whitish below; fins dark. There is also a rare light-colored variation in pigmentation that is yellowish-orange. Although often mistaken for kelp rockfish, these “husky boys” are easily differentiated during cleaning—the grass rockfish has very short and blunt gill rakers on its first gill arch. The gill rakers are nearly as wide as they are long. 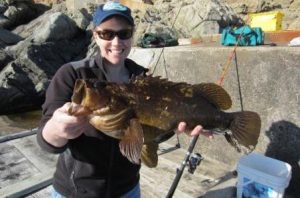 Habitat: A shallow water rockfish, found from intertidal depths to about 150 feet. Most are found in shallow-water rocky areas, especially where there is vegetation. Grassies are common to kelp beds and reefs where they often hide in the crevices. In comparison to other rockfish, their shallow water habitat most closely mimics that of the black-and-yellow rockfish. While juvenile grassies are diurnal (daytime) feeders, adult fish are nocturnal (nighttime) feeders that primarily feed near the bottom. Key prey includes crabs, shrimp, snails, isopods and small fish including perch.

Piers: Although one of the most common shallow-water rockfish in California, relatively few are taken from piers south of Point Conception. Needed ingredients are a rocky bottom or substantial kelp near the pier. However, juveniles are often taken from piers located in bays during the summer months. Best bets for juvenile fish include the Morro Bay T-Piers, Pillar Point Harbor Pier, San Francisco Municipal Pier, Berkeley Pier and Citizen’s Dock (Crescent City). Most years see a few adult fish taken from the Goleta Pier (near the the pipe-reef) and Gaviota Pier. Higher numbers of adults are taken from the Port San Luis Pier, Monterey Coast Guard Pier, Capitola Wharf, Santa Cruz Wharf (in the wells at the end), Point Arena Pier (perhaps the best), Trinidad Pier and Citizen’s Dock (Crescent City). Grass rockfish are fairly common around the Point Arena Pier from June until October; fish inshore or cast straight out on the left side of the pier to the nearby reefs. Generally considered the most important rockfish for rock and jetty fishermen.

Shoreline: One of the main catches by rocky shore anglers in central and northern California. 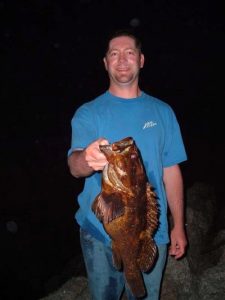 Bait and Tackle: Medium to light gear is sufficient for these fish. A high/low leader equipped with size 4 or 2 hooks is common tackle. Fish on or near the bottom and be prepared for a strike at any time. Best baits appear to be shrimp, mussel, pile worms or tube worms.

Food Value: An excellent eating, mild-flavored fish that seems best fried but can be cooked in almost any manner. Italian fishermen of the 19th century considered this to be the best tasting of all the rockfish and apparently that opinion is still held by many. At $4.85 per pound, grass rockfish received the highest prices paid to California commercial fishermen for rockfish in 1998. There was a distinct difference in price between the shallow water rockfish kept and sold as live fish versus the deepwater species but that doesn’t detract from the grass rockfish ranking of #1. Treefish were #2 at $4.66 per pound, olive rockfish and bronzebacked rockfish tied for #3 at $3.74, gopher rockfish were #5 at $2.78, China rockfish #6 at $2.72, black-and-yellow #7 at $2.41, quillback rockfish #8 at $1.79, brown rockfish #9 at $1.61, and kelp rockfish #10 at 1.57. Rosethorn rockfish were down at the bottom of the 31 species listed at only $.38.