Species: Synodus lucioceps (Ayres, 1855); from the Greek word synodus (the ancient name of a fish in which the teeth meet), and the Latin word lucioceps (pike head).

Identification: They are cylindrical shaped with a broad lizard-like head and a mouth full of large canine-like teeth; the snout is almost triangular. Their coloring is mostly brown or greenish-brown above with a brassy luster on the side; blackish stripes along the lateral line; some criss-cross lines running at angles from the lateral line to the back; sides and belly usually a light gray; lower jaw and fins yellow. Young fish have a series of blue-colored diamonds along the lateral line.

Size: Up to 25.2 inches and around 4 pounds; most caught off piers are under 14 inches. 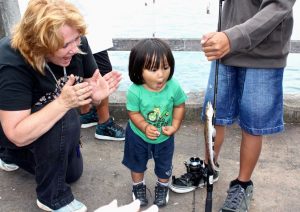 Lizardfish caught at the Cabrillo Beach Pier in San Pedro

Range: From Guaymas, Mexico, and Gulf of California, to Cape Beal, British Columbia. Common from Bahia Magdalena, Baja California to southern California. Listed in most “fish” books as an uncommon catch, especially north of Point Conception, and rare north of San Francisco. I used to agree.

I fished California piers for 17 years before I caught my first lizardfish, a fish from the Newport Pier in 1978. Four years later I caught my second, a fish at Port Hueneme, and then in 1984 a third was caught at Wharf #2 in Monterey. It would stay that way, basically an occasional, incidental catch into the mid-90s when they began to show up more regularly. 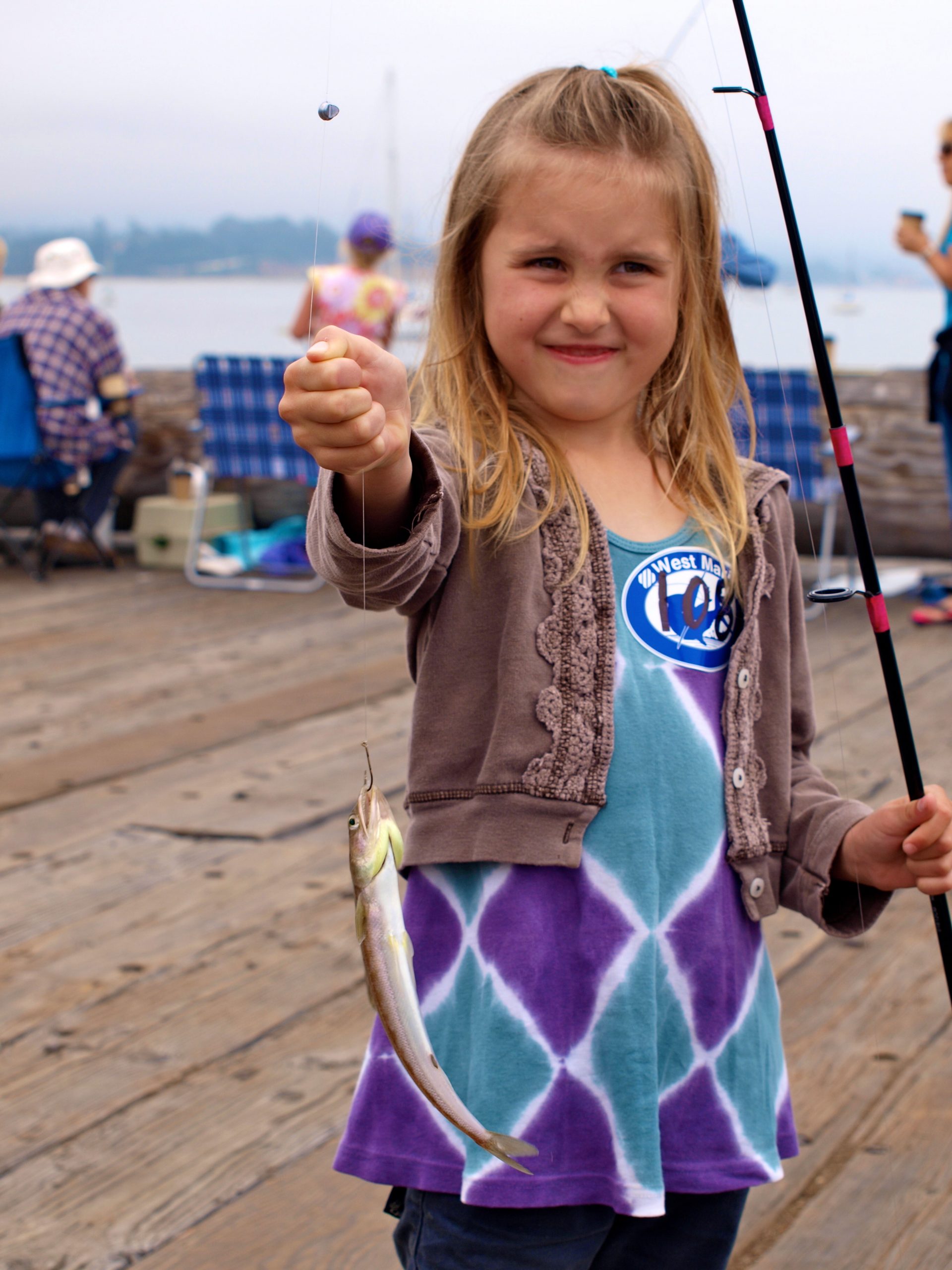 Lizardfish at the Kids Derby at Stearns Wharf in 2013

Then, in 2006, it seemed their numbers took off and for a decade they became a regular catch at most oceanfront piers from San Diego north to Santa Cruz. In 2013 reports were coming in of vast numbers of lizardfish from San Diego north, and in personal visits to Stearns Wharf (Santa Barbara), Gaviota, Port San Luis, Avila, the Morro Bay T-Piers, Cayucos, San Simeon and Wharf #2 in Monterey, they seemd to literally cover the bottom. Anglers using Sabiki-type bait rigs were bringing in 4-6 fish every cast and, for whatever reason, some anglers were catching and keeping several hundred lizardfish a day. The huge numbers remained in 2014, saw a slight drop in 2015, and then saw a huge drop in 2016. Since then they’ve once again become an occasional catch at most piers. Why the change? I haven’t heard a good reason although they do seem to show up most commonly in cold-water years. 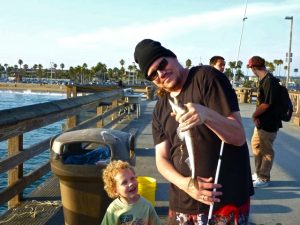 Lizardfish taken at the Balboa Pier by SanClementeEric

Habitat:  Prefers shallow, sandy areas 5 to 150 feet deep although recorded down to a depth of 751 feet. Lizzies are ambush predators that spend most of their time sitting motionless on the bottom with the body at a slight angle (using their large pelvic fins) waiting for food to swim by. They then dart out at a fairly amazing speed to grab their meal with their long, pointed teeth. 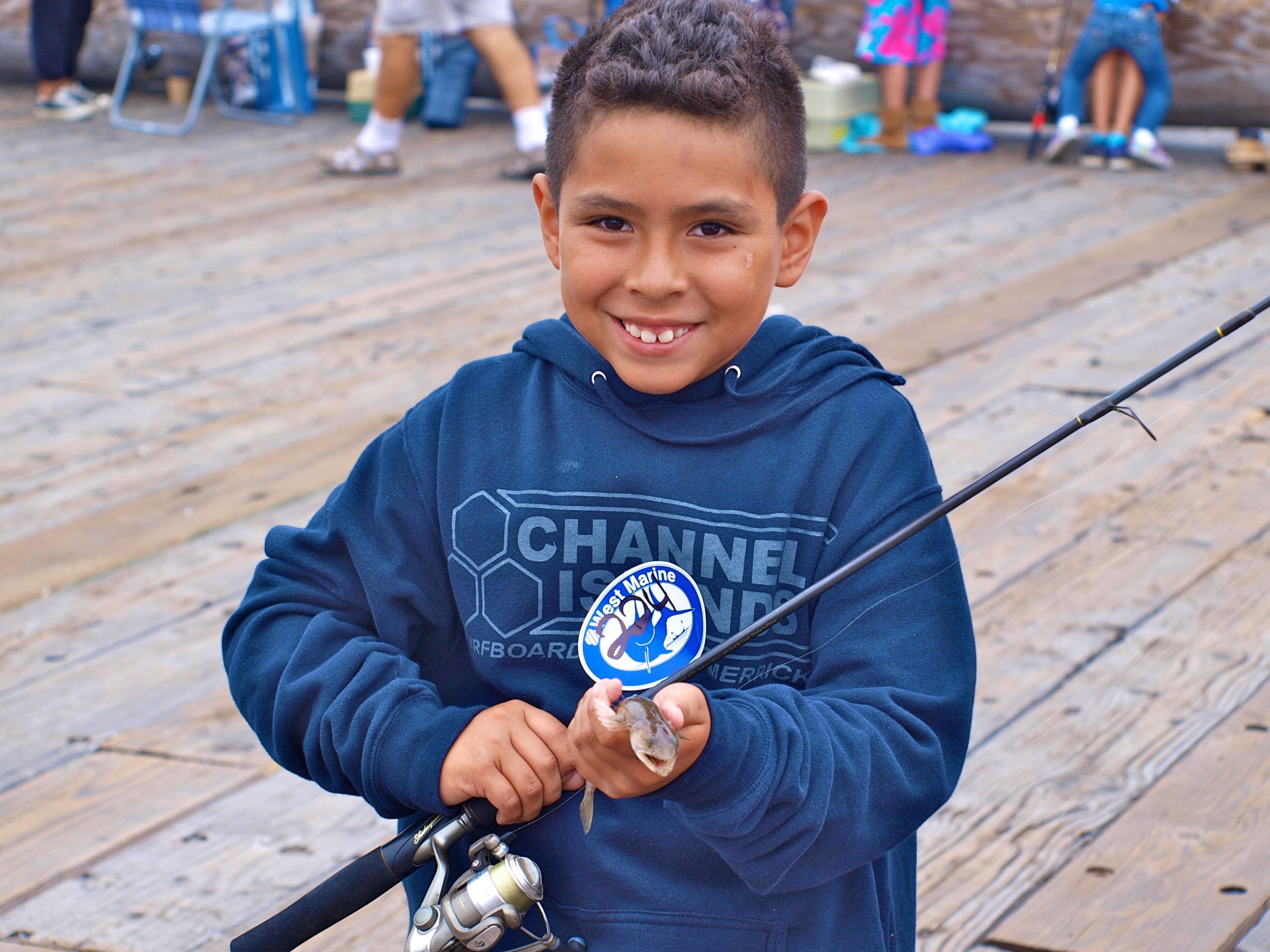 Lizardfish at the Kids Derby at Stearns Wharf in 2013

Shoreline: Taken occasionally on skiffs and kayaks fishing in bays or in shallow to moderately shallow water areas.

Bait and Tackle: Commonly caught when fishing the bottom for other species. Seems to hit almost any bait but the key is to keep the bait moving. I have caught them on cut bait, strips of squid, pile worms and Sabikis. Use light or medium tackle and a size 6 to 2 hook. Several people have reported that small lizardfish themselves make good bait for halibut, another predator species that mimics the lizard’s behavior. 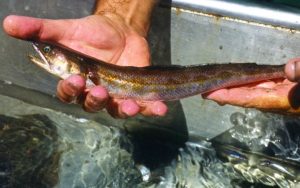 Lizardfish from the Hermosa Beach Pier

Food Value: Reportedly, they are good to eat but quite bony. Some people say the flesh has a strong “fishy” odor and an iodine taste, but others say they are good eating. I’m not sure. I do know that lizardfish are one of the fish used by the Japanese to create surimi for Japan (they usually use Pollock for U.S. surimi).         There is also a large market for dried lizardfish in Asia. According to Wikipedia, “The Bombay duck or bummalo (Harpadon nehereus, Bengali: bamaloh or loytta, Gujarati: bumla, Marathi: bombil: Bombeli, Sinhala) is, despite its name, not a duck but a lizardfish. It is native to the waters between Mumbai (formerly Bombay) and Kutch in the Arabian Sea, and a small number are also found in the Bay of Bengal. Great numbers are also caught in the South China Sea. The fish is often dried and salted before it is consumed, as its meat does not have a distinctive taste of its own. After drying, the odour of the fish is extremely powerful, and it is usually transported in airtight containers. Fresh fish are usually fried and served as a starter. In Mumbai, Konkan and the western coastal areas in India this dish is popularly known as ‘Bombil fry.’” 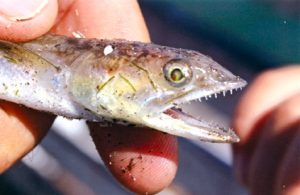 Comments: With the influx of lizardfish people kept asking what they were good for. One answer is that they make decent live bait for halibut (and a big money halibut tournament was won one year by an angler using a lizardfish as live bait). Other fish will also hit a lizardfish being used for bait; most surprising was a 40-pound giant (black) sea bass that was taken in San Diego Bay in July of 2013 on a lizardfish (and returned to the water since they are illegal). You just never know.

At least one derby itself was won by a lizardfish. The 1975 Long Beach Kids’ City-Wide Fishing Rodeo (at Belmont Pier) was won by Jackie Bomar, age 8, who caught a 1-pound, 8 ½ ounce lizardfish. It was so uncommon that veteran anglers from the Southern California Tuna Ckub who helped stage the rodeo didn’t recognize it. They finally called the Department of Fish and Game to come and identify the fish.

You can’t always choose your relatives (and luckily mine are a nice group). But consider the poor lizardfish. Lizzies are a cyclosquamate fish placed in the order, Aulopiformes, along with a dozen or so other families. Nothing strange about that except that all of those other families are deepwater fish, what one Ichthyology book (Fishes, Moyle and Cezh) calls “a mixed bag of odd fishes.” Included are the barracundinas, sabertooths, pearleyes, lancetfishes, greeneyes, spiderfishes and grideyes. All of these either occupy the water column of the deep sea or are actual deepsea bottom-dwellers.

Only the various lizardfish are considered inshore fish (although two species are deepwater fish). And while both the California lizardfish and Atlantic lizardfish reach fairly cool waters, most lizzies call tropical and subtropical waters their home.

I found that out during a trip to Hawaii in 1993 while chaperoning a group from Anderson Valley High School. We were staying near Waikiki Beach and several of us headed over to the beach to do a little surf fishing. In two hours I only managed three fish but one surprised me by being a lizardfish—a variegated lizardfish (Synodus variegates). It was the only lizardfish I caught on that trip although a return trip to Waikiki Beach two years later yielded up another variegated lizardfish. Two trips doesn’t mean they’re common for that beach but they were certainly common for me.

Notwithstanding their oddball cousins, lizardfish do have one honor. Not too many fish have had Naval vessels named after them. Not so with the typically maligned lizardfish. The USS Lizardfish (SS-373) was a Balao-class submarine commissioned December 30, 1944. Built in Illinois, she was towed down the Mississippi River to Algiers, Louisiana before putting out to sea where she traveled through the Panama Canal on way to Pearl Harbor. Soon after, she was headed out to the Java Sea and South China Sea where she was successfully engaged in several battles. The ship earned one battle star for World War II but the end of the war brought an end to the need for her service. The ship was decommissioned on June 1946 after less than two years of service.