Identification: White sturgeon have a long, streamlined body with a broad, flattened head, blunt snout, tiny eyes, and a shark-like tail, all features that help it maintain position in large, fast flowing water conditions. Sturgeon do not have scales, instead they have five rows of scutes (bony plates) on the body, one row on the back, one at the middle of each side, and one on each side of the belly. White sturgeon have 11-14 dorsal scutes, 38-48 midlateral scutes, and 9–12 ventral scutes. There are four whiskers (barbels) located on the underside of the snout, closer to the tip of the snout than to the mouth. Their dorsal color is gray, pale olive, or gray-brown, the fins are a dusky, opaque gray, and the underside is white.

Size: Recorded to nearly 20 feet in length and 1,800 pounds although few are seen today longer than ten feet in length. Most caught from piers are less than 100 pounds.

The California record fish weighed 468 pounds and was caught in San Pablo Bay by Joey Pallotta in 1983. It’s a record that cannot be broken since California’s slot limit now requires the release of the bigger fish.

This is the largest fresh water fish in North America and third largest sturgeon in the world. The beluga (Huso huso), found primarily in the Caspian and Black Sea basins, and occasionally in the Adriatic Sea, is the largest sturgeon reaching 24 feet in length and 3,250 pounds. (Although a monster measuring 28-feet long and weighing 4,570 pounds was reportedly taken from the Volga River near the Russian city of Astrakhan in 1736 but there is no verification of that fish). The Kaluga sturgeon (Huso dauricus), found in the Amur River basin, is the second largest sturgeon (22.6 feet and 2,200 pounds).

Range: From Ensenada, northern Baja California, to Cook Inlet, Gulf of Alaska. Although rare to the south, and less prevelant in saltwater than green sturgeon, a 47.9 inch (14-pound cleaned-weight) fish was taken at Isla de Todod Santos near Ensenada in March of 2003. Another white sturgeon, 75.7 inches long (45.2 pounds) was collected at Flat Rock, Rancho Palos Verdes in Los Angeles County on April 24, 2003. 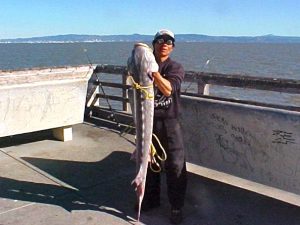 Stan “The Man” and a white sturgeon from the Brisbane Pier

Habitat: Anadromous, meaning they spend part of their lives in fresh water (where they spawn) and part in salt water; unlike most fish they may make the journey from fresh to salt water and back many times. They spend most of their lives in brackish bays, estuarine areas, and slow-moving rivers. Sturgeon are considered “benthic cruisers” that roam the bottom searching for food. The food is rarely detected by sight. Instead, they use the sensitive barbels under the snout, and ampullary (electric) organs, also located under the snout, to detect prey/food. The sturgeon feel and taste the food first and then suck it up into their bottom-oriented mouth by way of their “protruisible jaw” that can quickly shoot out (extend) and suck in whatever food they’ve chosen.

Young sturgeon feed mainly on insects, worms, amphipods (shrimp-like crustacea), and other small invertebrates such as copepods and mysid shrimp (opossum shrimp). Older fish become true gourmands feeding on a wide variety of bottom dwelling crustaceans and mollusks (crabs, shrimp, clams) as well as whatever fish are convenient (can they grab them?). Although they will often feed on the more sentinent, bottom-hugging fish (i.e., gobies and sculpins), they also include in their menu such species as herring (and herring eggs), shad, striped bass and salmon. Given the poor eyesight of sturgeon, and their manner of detecting food, it’s theorized that most of the fish eaten by sturgeon are captured at night. Countering the gourmand claim are those that say sturgeon are nothing more than indiscrimate bottom-feeders, akin to Uncle Ed’s “Fish-style” vacuum cleaner, sucking up anything that seems edible. Given that house cats, squirrels, seal pups, waterfowl, and carcasses of spawned-out salmon have been found in sturgeon stomachs, they may be right. Of note was the horse’s head supposedly found in a Russian beluga sturgeon. Don’t know if the horse head had anything to do with the Russian mafia. Nor is it easy to imagine how big that beluga’s mouth had to be to swallow a horse head. Questions, questions, questions. 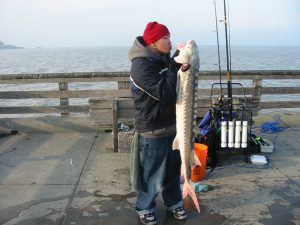 Shoreline: An occasional catch by shore anglers in the San Francisco-Bay Delta.

Bait and Tackle: Caught with heavy tackle, a sliding bait leader, and live bait such as ghost, mud, or grass shrimp. Large Kahle hooks can be used and several shrimp can be impaled on the hook. When herring are spawning in nearby areas, herring and herring eggs make excellent bait. Use eel when crabs are are in full force and grabbing softer bait. Am told the best way to use the eel is to cut off a 2-3-inch-long chunk. Then cut the chunk into four strips before attaching to the hook. The strips will flutter and hopefully attract Mr. Sturgeon.

Surprisingly, given their size and manner of sucking in food, sturgeon have a very gentle bite that is hard to detect. Regulars seem to acquire the ability to spot the subtle “pumps” that indicate a bite but it can take newbies time to figure out when to strike.

Food Value: Excellent, mild-flavored meat that contains no bones and cuts up nicely into steaks for broiling, baking or frying. 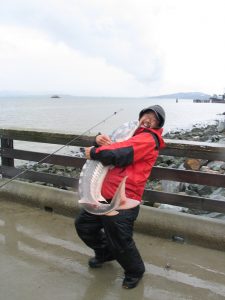 Comments: Many sturgeon are hooked from Bay Area piers but hooking them is just part of the battle. An angler must have stout tackle, knowledge, a bit of luck, and the understanding of how to get the fish onto the pier, assuming it hasn’t stripped the reel of line or wrapped the line around a piling. However, large sturgeon are indeed landed: George Gano landed a 194-pound, eight-foot-long sturgeon while fishing from the old Vallejo Pier and a 170-pound fish was reported from the McNear Park Pier.

Philosopher fish? Sturgeon are considered very special fish by many people. Why? (1) They are considered an ancient fish that have changed little over the past 175 million years. (2) Though classified as a bony fish, they are more cartilaginous than bony, with an internal bone structure similar to that of sharks. (3) They can reach over 100 years of age. (4) They can reach a very large size and are desired by both sports and commercial fishermen. (5) They are a valuable species due to their eggs (caviar), a high priced delicacy for many people. (6) Although reaching an old age, sturgeon in California do not spawn until middle age, typically 10-15 years of age for males (3.6-6 feet long) and 12-20 years of age for females (4.6-6.6 feet long). And while females may spawn more than once it occurs only about every 4 to 10 years. Over fishing (often illegal poaching) in many areas of the world has led to an alarming decrease in the number of females and juvenile fish. (7) Almost all species of sturgeon are endangered, including several sub-species of white strurgeon, and many are close to extinction.

For all of these reasons sturgeon rank high in the hierarchy of piscatorial species as seen in the following:

One thinks of the sturgeon as a kind of philosopher among fishes, as if its ancient lineage had bred, over the thousands of centuries, a curious old wisdom and a quiet acceptance of change. The sturgeon has seen more years when it first spawns than many fish see in a lifetime. 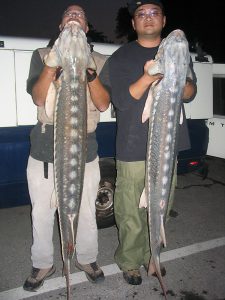