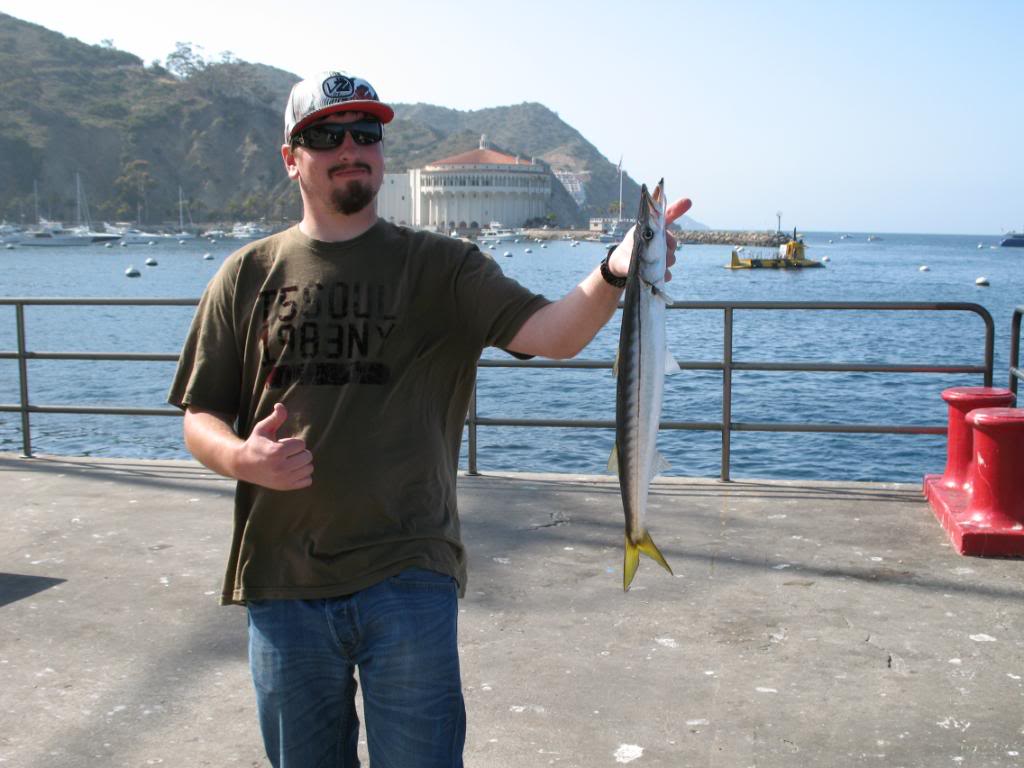 Barracuda at the Cabrillo Mole in Avalon

Identification: Barracuda are long and slender with a sharp-pointed head and a mouth full of very sharp fang-like teeth. They have two widely separated dorsal fins. They have a distinct look from most other fish, although the young look a little like lizardfish. 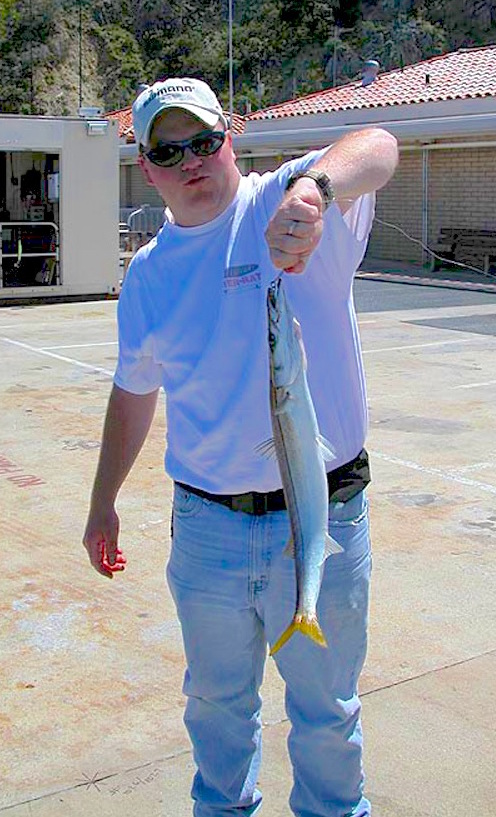 Baitfish (Adam) and a barracuda at the Cabrillo Mole in Avalon

Size: Reported to 5 feet but recorded to 4 feet and 18 pounds; most caught from piers are under 30 inches. Almost all large barracuda are females. The California angling record fish weighed 15 lb 15 oz and was caught near San Onofre in 1957. The diving record fish is 14 Lbs 7 oz for a fish taken at Catalina Island in 1957. 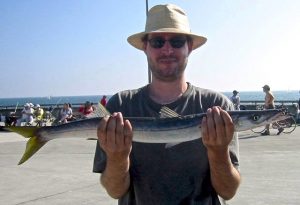 A barracuda from the Venice Pier

Habitat: Nearshore epipelagic, near surface down to a recorded depth of 125 feet. Young barracuda are often found inshore and in bays. 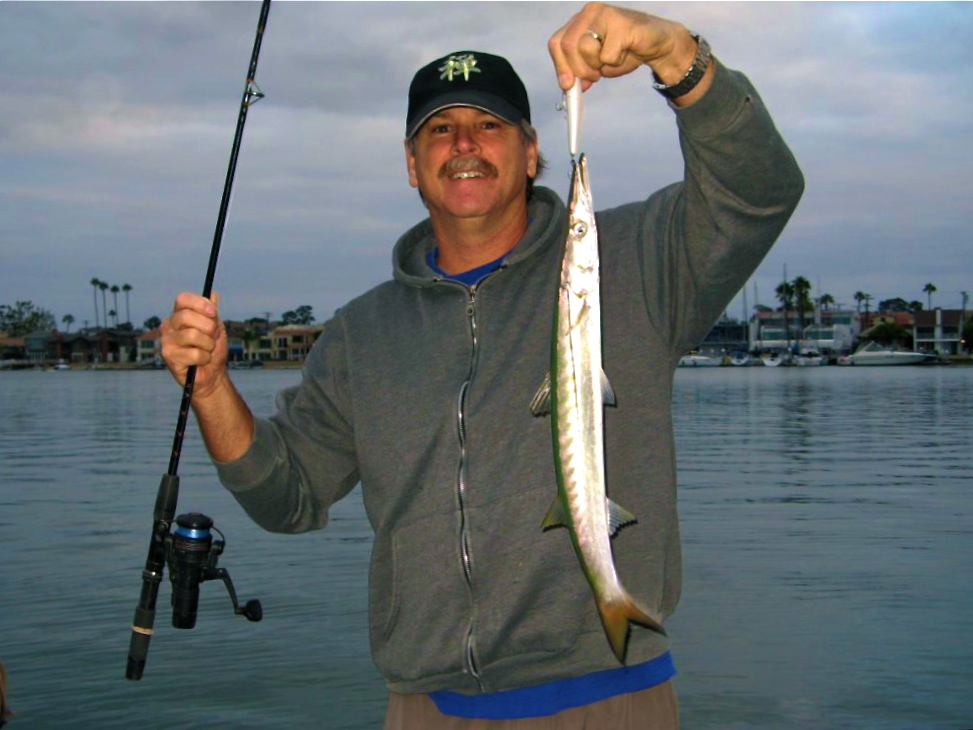 Boats: One of the main southern California boat species.

Bait and Tackle: Live anchovies, when available, are by far the best bait. If using live anchovies, try a size 4 hook and a sliding leader or use a float/bobber to keep the leader at mid-depth. Small smelt can also be used for live bait although they are not as good as anchovies. Gold spoons—Krocodiles and Kastmasters—as well as Rebel Fast Tracks, have proven to be reliable artificial lures for the scooters. 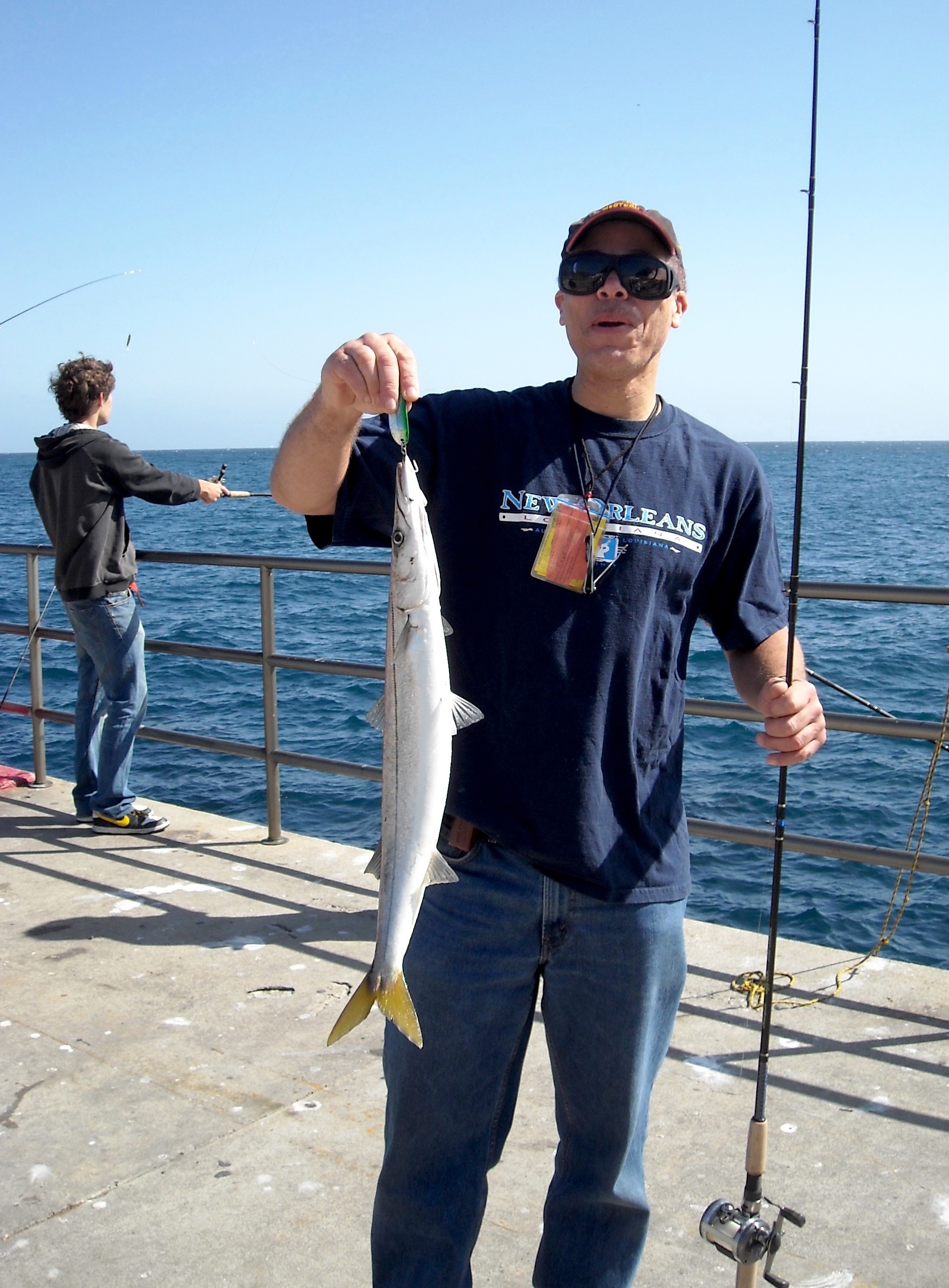 Redfish (Robert) and a barracuda from  the Cabrillo Mole in Avalon

Food Value: Keeper-sized fish are considered fair to good eating with white-colored flesh that’s somewhat bland in taste with small flakes and firm texture. The flesh is low in fat content and suitable for pretty much all methods of cooking (including smoking). Barracuda will tend to soften quickly if left in the hot sun so clean soon after capture and then keep the fillets in a cooler.

Comments: Although barracuda today are considered somewhat of a bonus fish by most pier fisherman, there was a time, in the not too distant past, when they were common to piers; however, the numbers that frequent piers seem to decrease each year. When I first moved from Newport Beach to San Diego, I was surprised at the number of barracuda caught from piers inside San Diego Bay and Mission Bay. Since then I have come to learn that bays are often the best areas for the young barracuda—small fish up to around two feet in length. In those days it was sometimes common to catch a fish on nearly every cast using a live anchovy or a small lure, especially gold or silver spoons. Today these small fish are illegal and it is best to simply not fish for them; hooks, in particular the treble hooks common to spoons, will tear up the mouths of the under-sized fish.

Strange but true, the only time I ever caught a fish with my line OUT of the water was when I was fishing for barracuda one day near the Dana Marina in Mission Bay. A friend and I had rented a rowboat early one morning, and then proceeded to tie gold spoons onto our lines before heading out to the small bait barge in the cove. I left my rod at the back of the boat with the spoon dangling at least 8-10 inches away from the water. Imagine my surprise when a small barracuda jumped out of the water and grabbed the lure as we were rowing out to our spot. And yes, I did land the fish. It happened in August of 1964 on a trip where I caught 21 barracuda, 16 queenfish and 2 halibut. The “out of water” fish was the highlight. 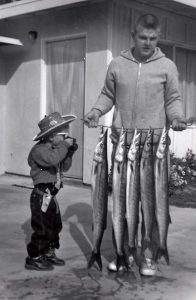 A catch of barracuda from Catalina. When I was young and still bigger than my brother.