Identification: Similar to the leopard shark and gray smoothhound except that the first dorsal is further ahead on top of body, equidistant between origin of pelvic and pectoral fins. Their coloring is red-brown or bronze above, silvery below.

Size: Length to five feet but most caught from piers are under three feet. 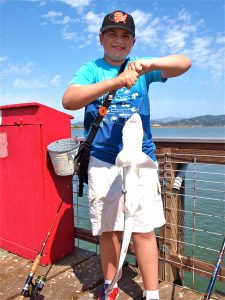 Range: From the Gulf of California to northern Washington. Most smoothhounds found north of Point Conception are brown smoothhounds; uncommon north of Eureka.

Habitat: From the tropics and the Gulf of California to Northern Washington. Most smoothhounds found north of Point Conception are brown smoothhounds; uncommon north of Humboldt Bay.

Shoreline: A frequent catch by anglers in San Francisco and San Pablo Bay.

Bait and Tackle: Will hit almost any bait although squid is the best! Fish with medium tackle and size 4 to 2/0 hooks. If possible, fish at night.

Food Value: A mild flavored flesh suited to several methods of cooking. The best method is probably grilled. It does need to be cleaned properly and kept cool before cooking.

Comments: Although most smoothhound sharks are thrown back, they are a fine meal when cleaned and prepared properly.