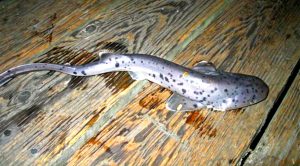 Small sevengill from the Berkeley Pier 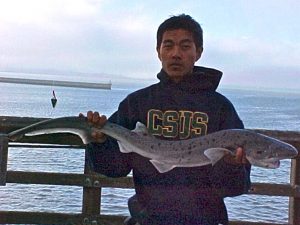 Identification: The only California shark with 7 gill slits. The body is somewhat heavy and flabby, tapered with a broad head, blunt snout, and small eyes. They have a single dorsal fin far back on the body; upper lobe of tail is very long. Five rows of small, sharp, pointed teeth in the upper jaw—except for one middle tooth (effective for holding prey); lower teeth saw-like (effective for tearing and cutting prey). Color seems to vary depending upon location and they may be able to slightly alter their color. Fish from San Francisco Bay are typically olive brown to a muddy gray color, those from Humboldt Bay are usually a pale silvery gray to reddish brown: all have black spots on body and fins. An unusual albino seven-gill was caught in the San Mateo Shark Derby back in 1952 and later displayed at the Steinhart Aquarium. 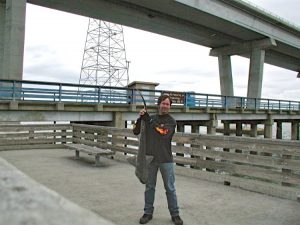 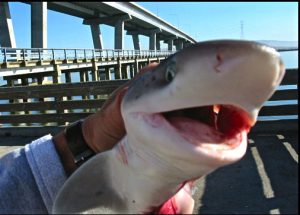 Pictures of a seven gill taken from the Dumbarton Pier

Size: Length to at least 9.7 feet and nearly 300 pounds in size. Most sevengills caught from piers are young fish 2-4 feet in length and under 50 pounds in weight. However, most years seem to see at least a few large 6-foot plus fish taken. The California record fish weighed 276 lb 0 oz and was taken in Humboldt Bay in 1996. 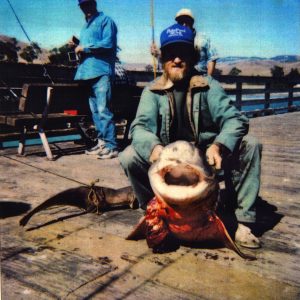 Large sevengill taken at the Cayucos Pier in 1998

The largest sevengill reported to PFIC was a fish taken from the Ocean Beach Pier in San Diego on December 20, 2020. Measurements given were a length of 9 ½ feet, a girth of about 3 ½ feet, and an estimated weight of 350 pounds (but that’s probably a little high). It was caught by Danny Reid of the OB Extreme Shark Fishing Crew who said it took over two hours to haul in the large shark. It was caught on moray eel bait.

Another large sevengill was taken at the Cayucos Pier in December of 1998. Pictures show a large 7 ½-foot-long fish with a reported weight of 180-pounds (which seems far too high).

Two additional large 7-gills were reported from the Ocean Beach Pier. In May of 2006, a nearly 8-foot-long, 112-pound 7-gill shark was landed, while May of 2008 saw the capture of a 7-gill estimated to be 10-10 ½ feet long. The only problem is that 7-gills are only supposed to reach a little over nine and a half feet in length. (Perhaps it was a 6-gill since they’ve been reported to 15 feet in length?)

In October 2009 the Goleta Pier saw the capture of both a six-foot and eight-foot 7-gill. Just a month later saw another 7-gill, this one a seven-foot, nine-inch fish. 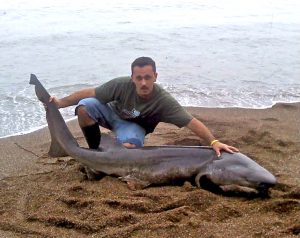 Range: Found in temperate waters of the Pacific, Indian and South Atlantic Oceans (and very common off South Africa and Namibia). Found in North America from the Gulf of California to northern British Columbia off Butedale and Bonilla Island. Common in central California, especially San Francisco Bay.

Habitat: A bottom oriented shark common to inshore areas (especially rocky areas near kelp) and in bays, especially San Francisco Bay, Tomales Bay and Humboldt Bay. Most common from the spring to the fall; may migrate to deeper water during the winter. In San Francisco Bay, springtime sees mama sevengill dropping her pups (up to 82 young ‘uns) and that’s when small, immature fish make a regular appearance at several piers. 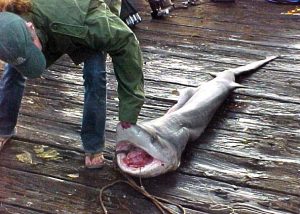 A good-sized sevengill taken from the Goleta Pier in 2009

Shoreline: Sometmes caught from shoreline areas in San Francisco Bay, most commonly early spring or late fall when the fish appear to move into shallower areas to spawn. 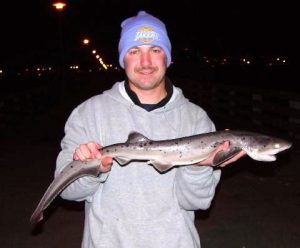 Boats: A common goal for anglers fishing from boats in San Francisco and Humboldt Bay.

Bait and Tackle: An opportunistic predator that feeds on many other fish including salmon, sturgeon, smaller fish, rays and fellow shark. It’s reported that 7-gills sometimes hunt in packs and use teamwork to capture larger food such as seals and dolphins. However, the use of seal meat and dolphin meat for bait by humans tends not to be PC (it’s also illegal). Instead, typical baits include whole fish such as mackerel and sardines, whole squid, small sharks, and salmon bellies. Typically anglers seeking out sevengills use heavier tackle—50+ pound line and steel leaders baited with a whole fish (and I heard of one angler using a live small brown smoothhound shark as bait). Although most of the 7-gills that are caught are captured by anglers specifically fishing for sharays (sharks and rays) and using this fairly heavy equipment and large baits, quite a few smaller “youngsters” are caught in San Francisco Bay, especially during the spring months.

Food Value: Considered one of the best eating sharks. They have a firm txture, off white color after cooking, and a mild taste. Due to their size, both fillets and steaks can be procured from the flesh and though almost any cooking method can be used, frying and bbq’ing are probably the most common methods.

Comments: One of the most primitive of sharks as well as one of the largest and more dangerous sharks handled by California pier fishermen. Watch out for the teeth! David A. Ebert, in Sharks Rays, and Chimaeras of California, writes that “Other than the Great White Shark they appear to be the dominant elasmobranch in the nearshore marine environment.” In addition, “Sevengills have been implicated in about a dozen attacks on dogs in and around San Francisco Bay. A bather in at least one attack was playing with his dog in shallow water when a 1.5- to 1.8-m-long ‘spotted’ shark attacked. Although the shark was unidentified, the attack occurred inside San Francisco Bay in an area in which sevengills are fairly abundant.” It’s also reported that 7-gills have bitten aquarium divers.

The reference to an attack on a bather may refer to the following: “A shark, measuring eight feet and five inches, in attempting to catch a little boy paddling in the water at Alamenda, ran so far up on the sand as to be unable to swim back to deep water, and where he was “done for” with an axe. — Santa Cruz Weekly Sentinel, August 27, 1881

The capture of a large sevengill by Matty and Dom in 2012; picture by capt. raysharking 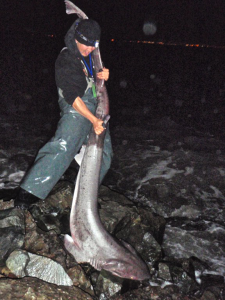 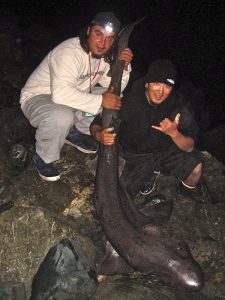 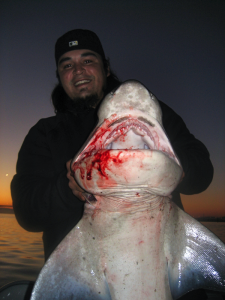 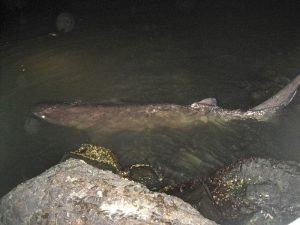 Some 7-Gills caught from piers — Although most common in the Bay Area, several have been caught from SoCal piers.