Alternate Names: Commonly called salmon grouper or simply grouper. Less common names include rock salmon, lockjaw, salmon rockfish, brown bomber, slimy, and two less than favorable names—sewer salmon and wormbag (due to infestations by parasitic worms). For a short period of time in the ‘50s, L.A. fish counts reported catches of “Siberian bass” that turned out to be bocaccio. Small bocaccio are still called red snapper or tomcod by central coast pier fishermen. During the 1800s, the fish were called bocaccio (bigmouth) and boccac (bocatch) by Italian fishermen. The Portugese fishermen of Monterey and San Francisco called them merou (after an Atlantic grouper). American fishermen often called them Jack, a name for walleyed pike. A favorite name for a period of time in British Columbia was andygrumps or grumps (Andy Grump being a term used for “strange people” in some parts of Scotland). See The Rockfish Of The Northeast Pacific, Milton, etc. for the full story. Called bara menuke and kuchibon menuke by Japanese fishermen; rocote bocaccio in Mexico.

Identification: Typical bass-like shape with a very large mouth; the chin projects forward, and the upper jaw reaches or extends beyond the rear of the eye. Their coloring is olive-brown, pink or red. Small fish often have brown spots on the side.

Size: Reaches 38.6 inches in length and at least 21 pounds in weight. Most bocaccio caught from piers are small, juvenile fish only a few inches long—rarely over 10 inches in length. Larger fish migrate to deeper offshore water. The California record fish weighed 17 lb 8 oz and was caught at Point St. Georges Reef, Del Norte Co. in 1987. The diving record fish weighed 4 Lbs 9 oz and was taken at Carmel in 2017. 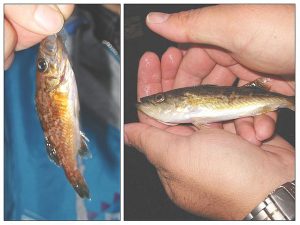 Range: From Punta Blanca and Isla Cedros central Baja California, to the western Gulf of Alaska, south of Shumagin Islands and Alaska peninsula. Common from Bahia San Quentin, northern Baja California, to northern California. Uncommon in Oregon and Washington, common in British Columbia. I have caught bocaccio at 19 different piers, from the Newport and Balboa piers in the south to Citizens Dock at Crescent City in the north.

Habitat: Adult bocaccio typically inhabit deep reef areas and can range to nearly 1,558 feet deep, although most are found between 165-825 feet. Young bocaccio recruit to inshore areas and often are found in sandy, shallow-water areas around piers.

Piers: Small, juvenile bocaccio were, for many years, one of the main attractions at Central Coast piers. Most summers would see tremendous numbers of the small fish move in and surround the piers from about mid-June until mid-August. In response, tremendous numbers of anglers, some small and some large, would also visit the piers. Using homemade multi-hook bait rigs, or the commercially bought Lucky Joe or Lucky Lura leaders, anglers would catch several “snappers” with each drop of their line. Little true sport was involved but bucket-loads of the small, tasty panfish were caught. Since the ‘80s the numbers have dropped dramatically. Today’s limit is two fish with a ten-inch minimum length. Since one drop with a Lucky Lura/Sabiki bait rig leader will often produce 3-4 illegal (too many and too small) bocaccio, it no longer makes any sense to fish for them. Nevertheless, some years will still see quite a few (in fact, sometimes huge schools) of the endangered small fish at central coast piers, especially those between Avila Beach and Cayucos. The problem is not how to catch them but how to keep them off your hook when using small hooks for perch.

Bait and Tackle: At this point the question on bait and tackle (for piers) is moot—you really can’t fish for them. If and when numbers ever do increase, and a fishery is reopened for them, all anglers need to do is use light tackle and a small-hook bait rig. Sometimes no bait is required, sometime a small strip of squid on the hooks make them more appealing. Rockcod anglers fishing in deepwater use a standard rockcod rig with two hooks and strip squid or fish.

Comments: Once one of the most important rockfish to the commercial fleets along the Pacific coast, and an important species for recreational anglers south of Cape Mendocino, the numbers of bocaccio have plummeted. Catches by recreational vessels in southern California dropped by 98.7% between 1980 and 1996 while the overall biomass and spawning output of he species is estimated at 2% of mid-60 levels. In central and northern California some bocaccio are mature (reproductive) at 14 inches, most are reproductive at 19 inches, and all are reproductive at 21 inches. Maturity rates start sooner in southern California, later north of California. The fish probably live to at least 50 years of age. Bocaccio means “big mouth” in Italian but was not named after Giovanni Boccacio, the famous fourteenth-century Italian Renaissance writer who wrote the Decameron. Giovanni Boccacio may have been a big mouth himself (who knows) but the spelling is different.