Identification: Typical stout, bass-like shape with tall, strong head spines. Body mostly blackish or olive-brown, with about 5-7 large irregular yellow blotches on the back; pale below. There’s a yellow patch between the dorsal fin spines and faint dark stripes radiate from the eye. Almost identical in every “ecological and morphological” aspect with gopher rockfish (Sebastes carnatus) from which they cannot be distinguished genetically (Love, etc. 2002). The exceptions are the depth at where most are found (black-and-yellows in shallower waters) and the coloring. Black-and-yellows are, no surprise, black/brown/yellow instead of the gopher’s brown/pink/white. 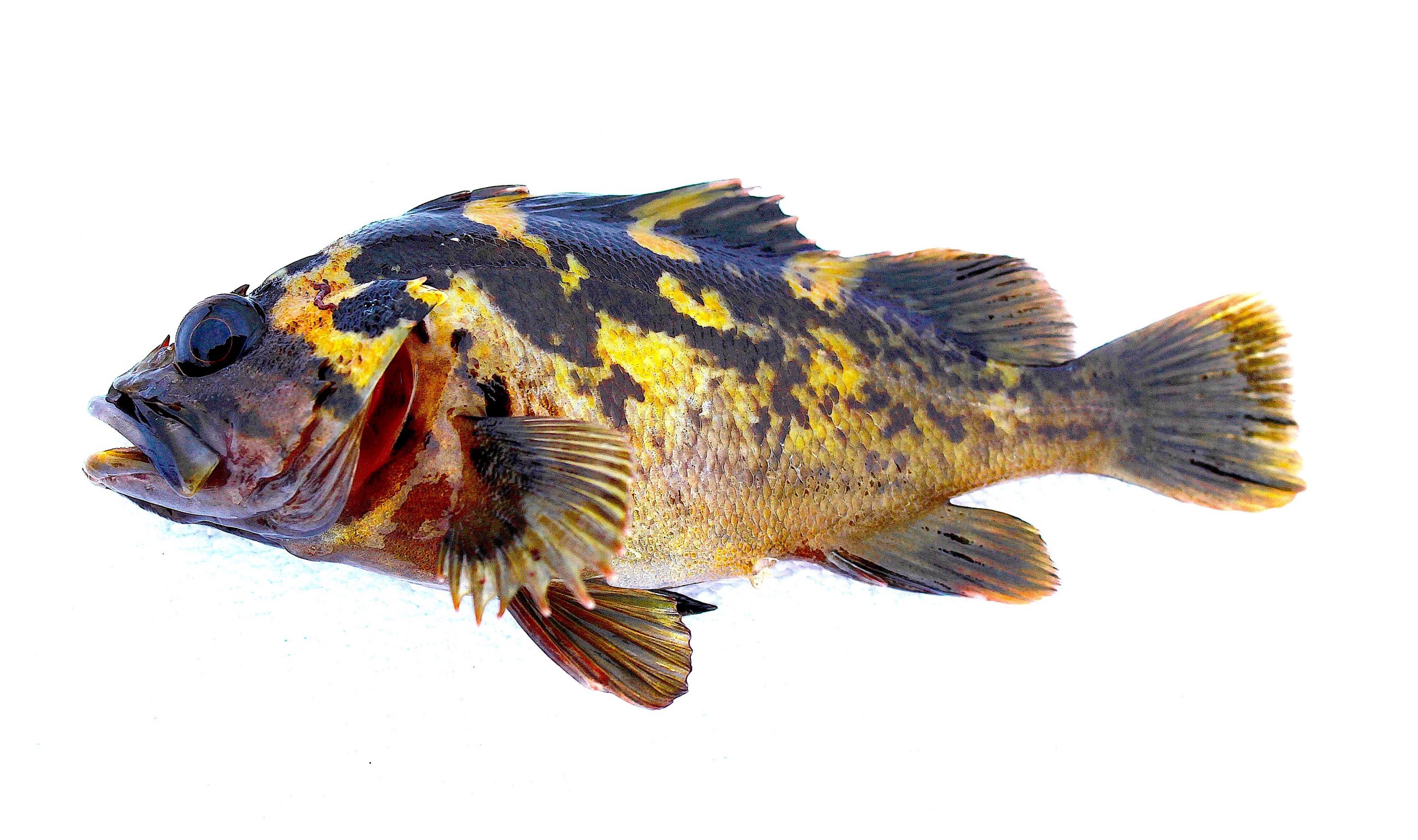 Size: To 15.3 inches; most caught from piers are less than 12 inches. There is no listed California record.

Range: Bahia Santa Maria, southern Baja California, Natividad Island, central Baja California, or Punta Salsipuedes in northern Baja, to Cape Blanco, Oregon. Until recently most reference books listed Eureka as the northern range of these fish but PFIC reports recorded their capture from rocks adjacent to Citizen’s Dock in Crescent City (Songslinger, 2001). Later scientific studies showed their presence at the Trinidad Pier, 23 miles north of Eureka (Donahue, 2007). The northern limit at Cape Blanco is cited in the Resource Inventory of Marine and Estuarine Fish of the West Coast and Alaska (Love, Mecklenburg, Mecklenburg and Thorsteinson, 2005). So, PFIC was once again ahead of the curve. In regard to these northern limits, I have caught them at the Trinidad Pier (2013) and Citizens Dock in Crescent City (one in 2016, three in 2017). Although black-and-yellows are considered uncommon south of Point Conception, I caught one at a Long Beach Shoreline pier in March of 2004. 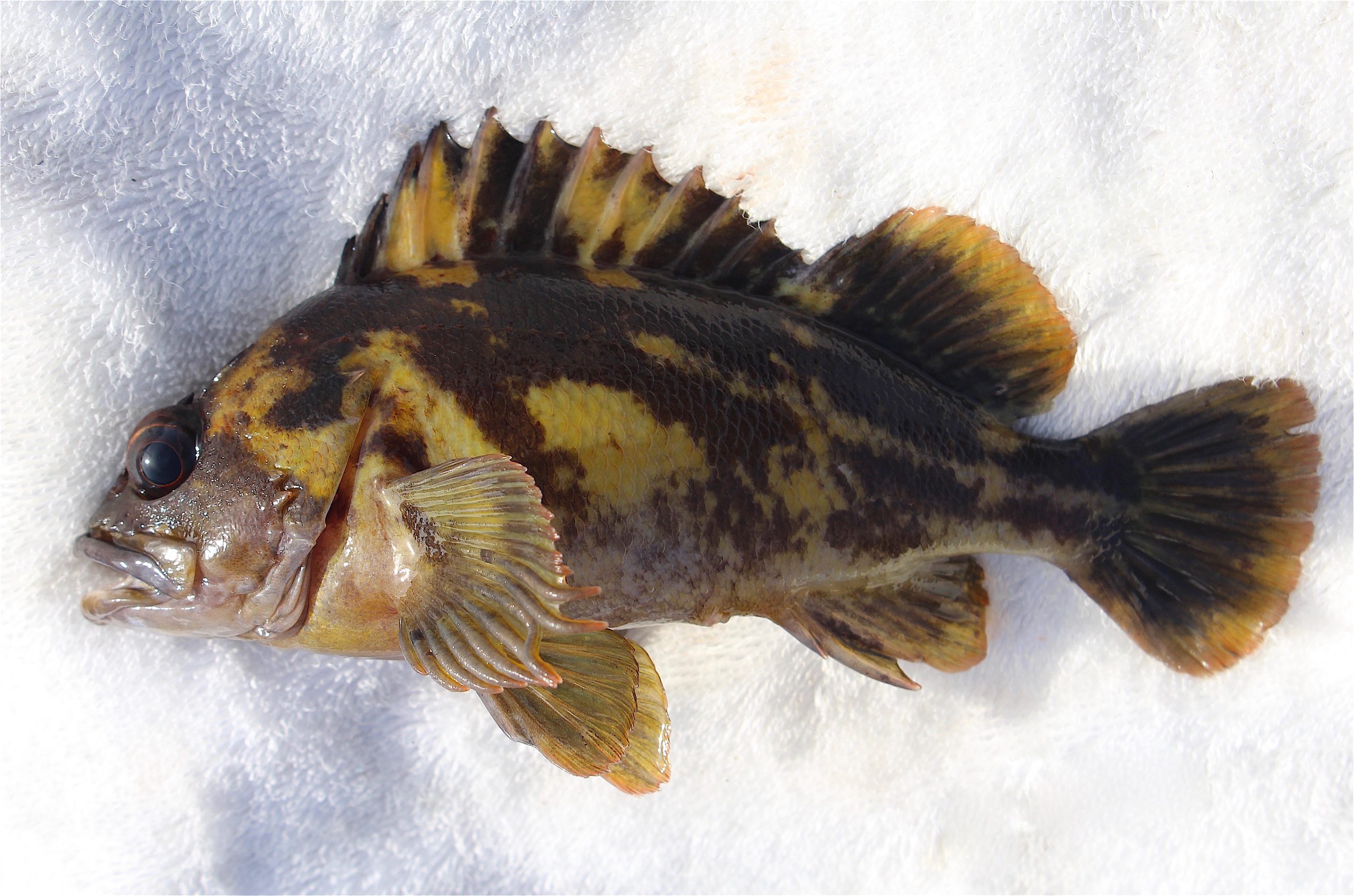 Habitat: Found intertidal to 120 feet but usually less than 60 feet. Adults like holes and crevices in rocky areas and typically are found right on the bottom. They’re most active at dawn and dusk although feeding occurs throughout the night. Their primary food is bethnic (bottom dwelling) shrimp and crabs although they will also swallow down careless fish that get just a little too close. A fairly aggressive and territorial rockfish that will try to keep other rockfish away from their domain. Considered, along with the grass rockfish, to have the most shallow depth distribution. 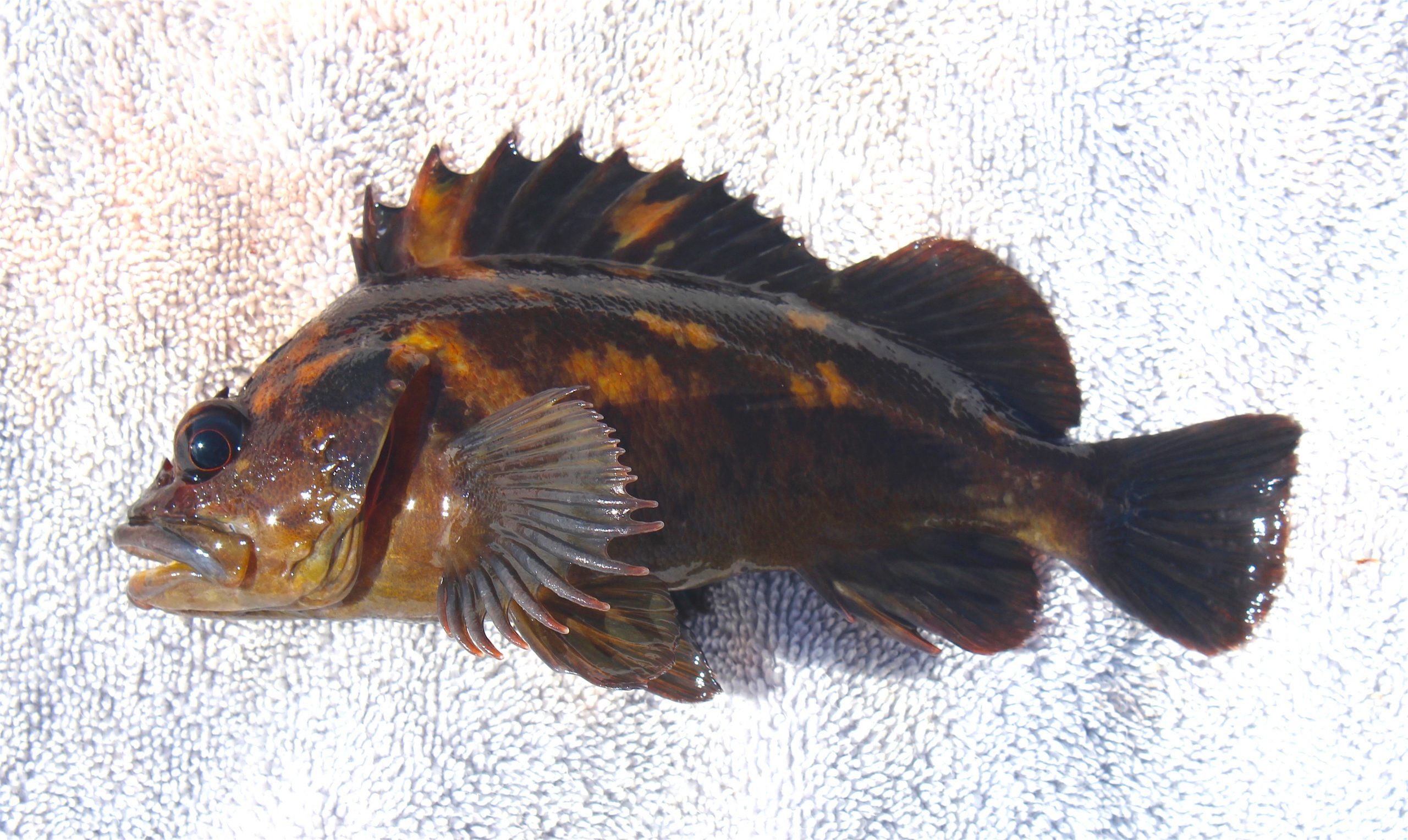 Shoreline: A common catch by rocky shore anglers in southern and central California.

Boats: Rarely seen by boaters although a few are taken by kayakers fishing inshore waters.

Bait and Tackle: Use a high/low leader, number 6 or 4 hooks, and pile worms, fresh mussel, small pieces of shrimp, or strips of squid.

Food Value: An excellent eating, mild-flavored fish that is somewhat soft textured with small flakes. It has moderate fat content. All methods of cooking ar suitable.

Comments: Black-and-yellows can live to about 30 years in age but few reach 20. Some fish reach maturity (and reproductive age) at 6 inches and 3 years of age, most are mature at 7 inches and 4 years, all are mature by 9 inches and 7 years. Black-and-yellows are often caught inshore around rocks, or under the pier by the pilings. Once established, they rarely move more than a mile from their home base.