Identification: Body short and compressed with thick spines on the head. Easily identified by the yellowish to olive (sometimes dark olive) coloring with five to six vertical black bars on the side, pink lips and two blackish bands radiate from the eye. The young have white-edged fins.

Size: To 16 inches. Most caught from piers are under a foot in length. The California record fish weighed 4 lb 3 oz and was caught at Malibu in 2003.

Habitat: Although recorded down to 338 feet in depth, they are primarily a shallow-water rockfish that likes to spend its time in caves and crevices, rocky areas, and kelp. Treefish are primarily night and twilight predators that seek out bethnic invertebrates such as shrimp, spider crabs and cancer crabs (they’re considered a nocturnal species). However they will also grab small fish when they have the chance. A residential, homebody species that rarely strays far from home. Trees are also highly territorial, competing with fellow treefish and nearshore rockfish (black-and-yellows, grass, and gophers) for food and shelter habitat. 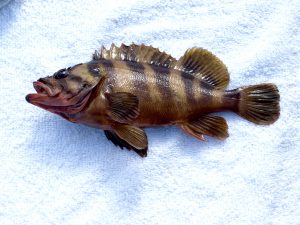 Bait and Tackle: Will take a variety of baits including worms, fresh mussels, ghost shrimp, squid and anchovies. They will hit most bait fished on most riggings. However, a high/low leader utilizing number 4 hooks appears to work best.

Food Value: An excellent eating, mild-flavored fish that can be cooked in many methods including frying and cooking whole. Treefish received the second highest price paid to California commercial fishermen for rockfish in 1998 at $4.66 per pound.

Comments: Treefish live to 23 years of age but what’s with the Helena Rubinstein lips? Milton Love says these fish are territorial and the pink/red lips may warn off other fish. Sounds reasonable to me.