Species: Platyrhinoidis triseriata (Jordan & Gilbert, 1880); from the Greek words platys (flat and broad), rhin (shark with a rough skin), oid (like) and is (similar), and the Latin words tri (three) and seriat (rows, in reference to the three rows of spines on the back).

Identification: Large rounded disk; long stout tail with two large dorsal fins and a caudal fin, and three rows of spines on back and tail characterize the thornback ray. Their coloring is brown, gray brown, or olive brown above, and white or cream below. 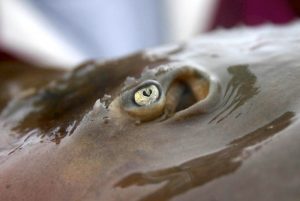 Size: To three feet (35.8 inches) and nearly 6 pounds. Most caught from piers are less than 24 inches.

Range: Gulf of California to Tomales Bay and once considered uncommon north of Monterey. However, increasing numbers have been showing up in the Bay Area since about 2010.

Habitat: Common to sandy-beach areas of southern California, especially sandy areas below kelp. Their main food is worms, clams, crabs and shrimp but they’ll eat almost anything they can find on the bottom. Surf zone down to 449 feet. 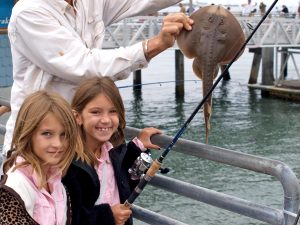 Thornback taken at the Shelter Island Pier in San Diego

Boats: Few are taken by boaters.

Bait and Tackle: Medium tackle with size 4 to 2/0 hooks. Almost any bait will work but squid and anchovies seem to catch the most thornbacks. 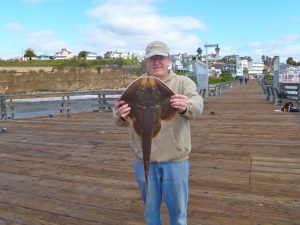 Food Value: Although a European thornback ray, Raja clavata, is considered perhaps the best tasting of all rays and skates, California’s thornback ray is not in the same class. In fact, because of its small size, I have never heard of anyone eating one of these rays.

Comments: This can be a fun ray to catch on light tackle! Try fishing at night on almost any southern California pier (and a few in central California), use a light pole, and bring a good light so that you can distinguish this non-harmful ray from the more dangerous round stingrays.