Species: Paralabrax maculatofasciatus (Steindachner, 1868); from the Greek words para (near) and labrax (a European bass), and the Latin words maculato (spotted) and fasciatus  (banded).

Identification: Bass-shaped with a dorsal fin similar to that of barred sand bass. Identified by the numerous reddish-brown or black spots that cover the body and fins.

Size: Length is to 15 inches and weight to 7 pounds. Most caught from piers are less than 12 inches. The California angling record weighed 6 lb 12 oz and was taken at Newport Bay in 1994.

Habitat: Typically found in shallow (2 to 30 feet), warm-water areas in bays and harbors as well as protected inshore environments along the coast. Recorded to a depth of 295 feet deep. Most commonly found where there is some form of structure—eelgrass, surfgrass or rocks.

Shoreline: One of the main catches for shore anglers fishing bays in southern California.

Boats: One of the main species for boaters fishing in southern California bays.

Bait and Tackle: Adult spotties are opportunistic feeders grabbing whatever seems to look like food. Although they primarily eat crabs and clams, especially jackknife (aka razorback) clams and littleneck clams, they also will snack on ghost shrimp, shrimp, snails, algae, brittle stars and small fish. Since crabs and clams are their main food, both are considered good bait. Other good baits, all fished on the bottom, include ghost shrimp, bloodworms, fresh mussels, other types of clams, and live small fish—anchovies and topsmelt. Tackle should be light with hooks size 6 or 4. They’ll often hit artificial lures like swim baits, grubs and even feathers.

Food Value: If you are lucky enough to land a keeper-size fish you will have a good meal. Spotted sand bass have a mild-flavored meat suitable to almost any kind of cooking. They can be used as fillets, baked whole, or cut into smaller pieces for deep-frying.

Comments: In the “don’t know why category.” it’s reported that spotted bass in the Anaheim and Newport Bays reach the legal 12-inch size in 2-3 years. However, the spotties typically can take up to 8 years to reach legal size in San Diego Bay. Fish from Marina del Rey are also fast growin’ while those from Long Beach Harbor and the Catalina Harbor are somewhat in the midpoint in growth rate. Overall, the average southern California spotty is of legal size by 3 years excepting those poor fish down in San Diego Bay. Of course that does give the “Diego clan” a few more years to enjoy the fun of being caught and returned (we hope) to the water by SoCal anglers. 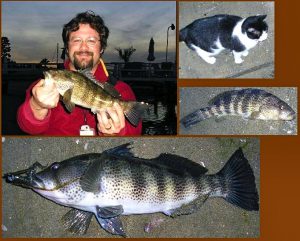