Species: Cymatogaster aggregata (Gibbons, 1854); from the Greek root words cymo (foetus or fetus) and gastro (belly) and the Latin word aggregatus (crowded together, referring to the schooling nature of the fish). Family Embiotocidae, subfamily Embiotocinae.

Identification: Their coloring is gray to greenish above, and silvery below. Females have three yellow bars on the side; the males typically only have yellow bars during the winter, in the breeding season they are nearly black. 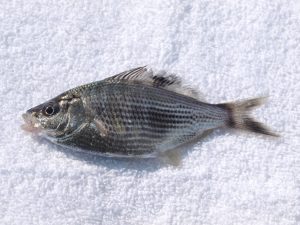 Habitat: Typically shallow water bay and oceanfront areas although recorded to a depth of 480 feet. Shiner surfperch prefer eelgrass beds in bays and are especially common around piers.

Piers: Shiners are one of the most numerous fish taken at California piers.

Bait and Tackle: For most anglers, the problem with these fish is how to keep them off your hook, not how to get them on. If you are using small hooks (under a size 4) and small bait, especially pieces of worm, and if shiners are around, you will probably catch them. However, some may actually want to catch them—they are great fun for kids. They also make good live bait for larger species like striped bass and halibut. To catch them, simply use small hooks (size 8), a small piece of bait, and fish from the top to the mid-depth level of the water.

Food Value: Too small—throw ’em back since they attract the larger game fish to the pier. Actually some ethnic groups do eat them; they’re often pickled and some people like to dry them and use them in Oriental dishes.

Comments: Shiners can be a problem when you are using expensive pile worms or bloodworms and fishing for the larger perch.