Identification: Round stingrays have an almost circular disk with the tail being shorter than the disk; there’s a long, sharp, venomous spine mid-length on top of the tail. Their coloring is light to dark brown on top with a whitish yellow bottom. Beware of the stinger. 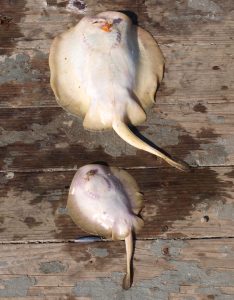 Range: From Panama Bay to Humboldt Bay, but few are seen north of Point Conception.

Habitat: Found in bays and shallow water, sandy-beach areas along the coast. Typically found at depths of 3 to 50 feet although possibly recorded to a depth of 298 feet; most common around 15 feet. Main foods are worms, small crustaceans, and mollusks.

Bait and Tackle: Most round stingrays are caught incidentally by anglers fishing on the bottom near the surfline for other types of fish. These fish will hit almost any natural bait. Tackle need only be of medium size and most of these fish should be released. Studies show a positive correlation between water temperature and round stingray; the higher the water temperature in the surf, the more stingrays will be present.

Food Value: None, due to their small size. 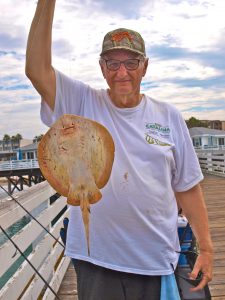 Comments: Extreme caution should be taken when handling these stingrays; the best method is to grip the tail with a pair of pliers and flip the fish over to keep the fish on its back while removing the hook. If absolutely necessary, clip or cut the stinger off (it will grow back in about a month). They are then harmless. (Because the caudal spine is a modified dermal denticle, lacking innervation, the spine can be easily clipped without causing pain or injury to the ray—Johansson et al. 2004). But, Do NOT cut the whole tail off! Since these fish offer little in the way of food they should be returned to the water.

“Stingray Central” appears to be the beach in Seal Beach. One fourth to one third of the nation’s estimated 1,500 annual wounds from stingrays occur in Seal Beach. Reputedly the lifeguards at the beach even keep buckets filled with hot water to help people soak their wounds. It’s a little amazing when you think of it. The United States has 12,383 general coastline miles (88,633 tidal miles) yet the one-mile-long beach at Seal Beach accounts for one quarter to one third of the stingray wounds in the United States. Why Seal Beach? Apparently it’s a combination of the warm water from the nearby San Gabriel River and the fine silt on the bottom that the stingrays like. Apparently breakwaters tame the surf, which in turn prevents the waves from flushing away the silt.