Over the past  twenty years the limit on bocaccio has changed several time so be sure to check the most current regulation and know the restrictions. Better yet is to simply let the baby bocaccio  go if you hook one given that it would take many, many of the small fish to make a meal.

<*}}}}}}}}}>< — Fish Bulletin #96 put out by the California Department of Fish Game in 1953 states: “There are now three piers, one at the town of Avila, a second used in connection with extensive shipments of oil from this port, and the third where most of the fish is now landed… For the last two decades, the landings at Avila have averaged 2,700,000 pounds per year. For the two years 1950 and 1951 the average was 23,600,000 pounds, mostly sardines for shipment by truck to canneries at Monterey and San Francisco. Other species have been jack mackerel, abalone, rockfish, crab, and albacore. Flatfish were delivered by two trawlers fishing out of this port. In May, June, and July of 1945 about 7,000 pounds of salmon were landed at Avila which accounts for salmon appearing on the fish receipts made out by local buyers that year. Sport fishing is active from two of the three piers, a few boats are for hire at the town’s campgrounds, and there were six party boats operating from this port in 1953.”

As long as I have been visiting the pier there have been Sportfishing boats available. For a number of years there was the Port San Luis Sportfishing. Boats included the Marauder, Diablo, and the Cheyenne. Today’s Patriot Sportfishing offers the Pacific Horizon and the Patriot. Of course times have changed (with the various F&G restrictions, MPAs, and the high cost of fuel) so the landing today offers up whale watching expeditions and even burial trips (ashes only, no bodies) to make up for the loss of income. 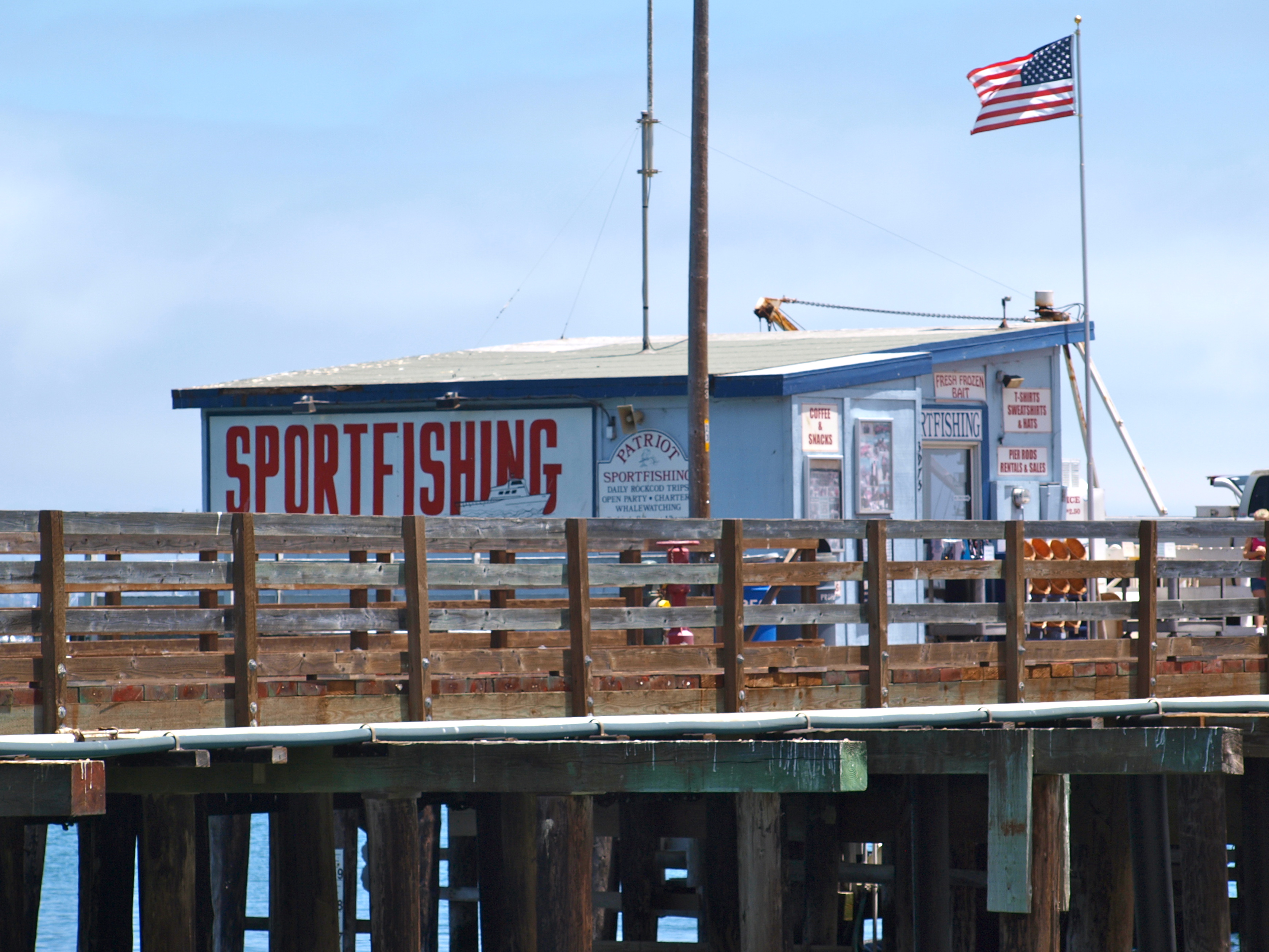 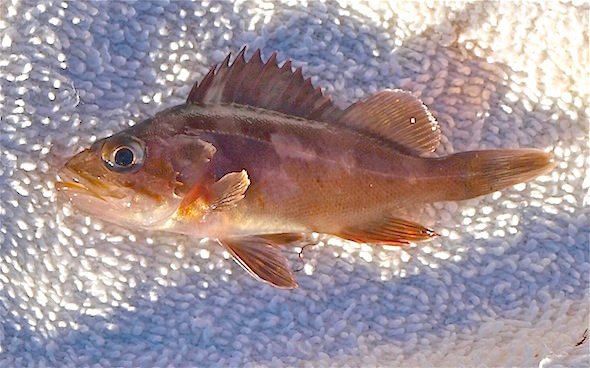 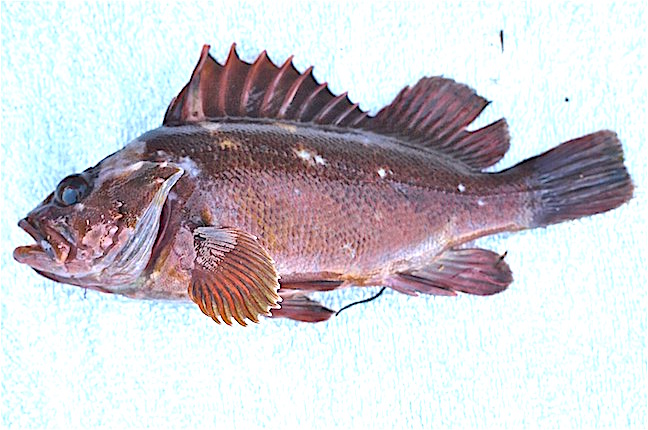 <*}}}}}}}}}>< — Just a few steps onto the pier sits a fish cleaning station that can be interesting when and if anglers are cleaning their fish. It’s also apparently interesting to a group of raccoons that I’ve spotted by the cleaning station several times. Apparently they will also head out to the end of the pier at times and do a little dumpster-diving looking for restaurant scraps but I’ve always spotted them right by the entrance. They’re cute but don’t get the wrong impression and try to get too close, they’re still wild animals. 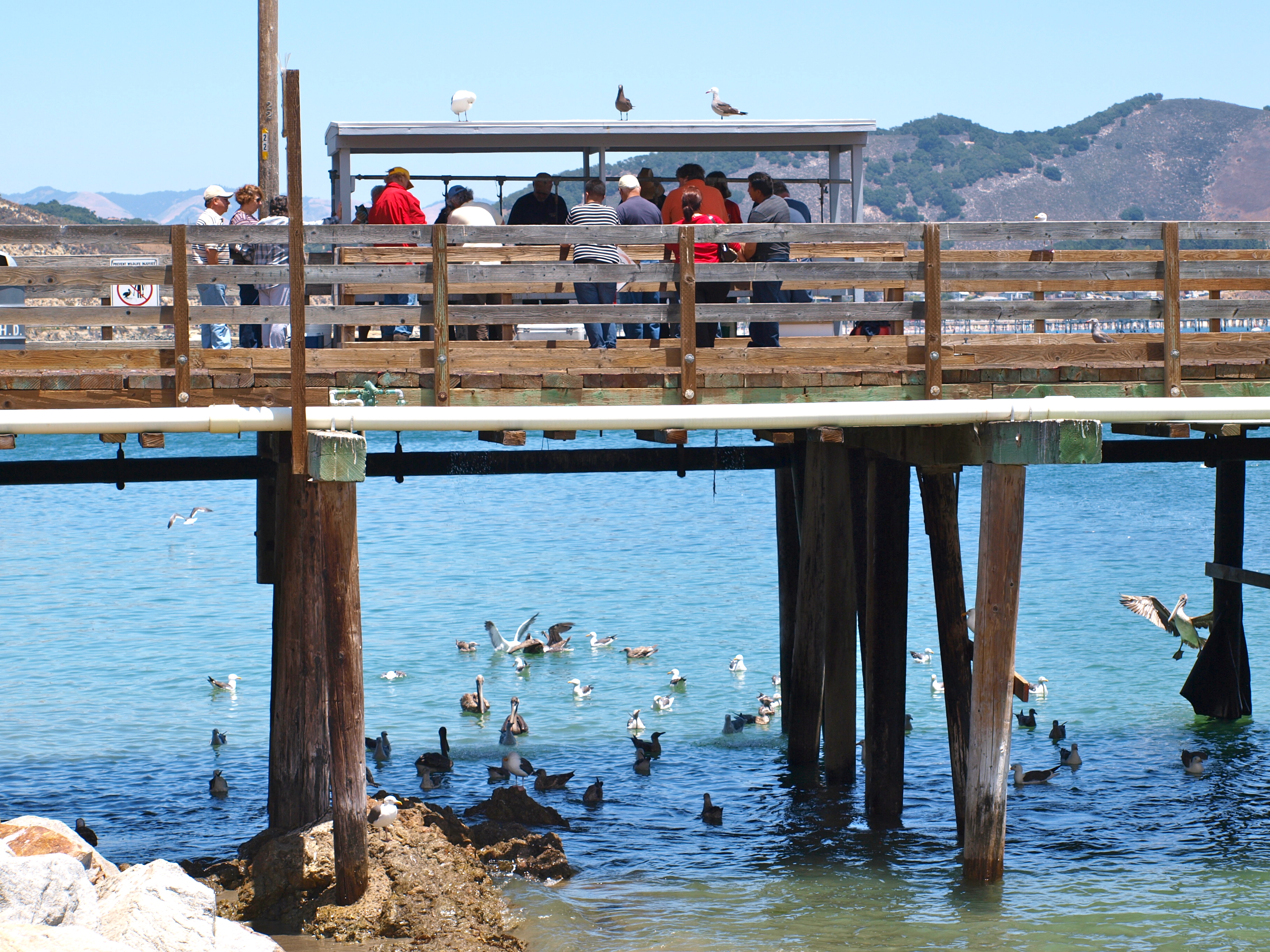 History Note.  John Harford built a fairly short, 540-foot-long wharf here in 1873. Steamships would arrive several times a week at Port Harford (today’s Port San Luis), where they would load and unload cargo and passengers. A narrow-gauge railway, the Pacific Coast Railroad ran two trains a day out onto the pier. The cars (drawn by horses) would go out to the end of the pier where a canopy (the roof you see today) sheltered the railroad’s warehouse.

In 1876 the narrow-gauge San Luis Obispo & Santa Maria Valley Railroad was extended to Port Harford, which provided a link to San Luis Obispo. That link meant an increase in business. Soon a hotel was built on the site for patrons of the railroad, the Ocean Hotel (which soon became the Hotel Marre.) At the same time the wharf was lengthened to 1,500 feet to reach deeper waters.

Two years later, in 1878, the wharf was destroyed by a tidal wave but it was soon rebuilt. In 1882 there was a merger of the narrow-gauge Pacific Coast Railroad and the San Luis Obispo & Santa Maria Valley Railroad. The new railroad, called the Pacific Coast Railway, also narrow-gauged, would operate until 1942. However, when the standard gauge Southern Pacific Railroad reached San Luis Obispo in 1894 it meant a drop in business for both Port Harford and the wharf at Avila Beach. Passengers could travel faster, and farmers could send their goods more cheaply, via the direct overland route of the Southern Pacific. But change was on the way with the development of oil.

In the late 1800s a breakwater had been constructed at Port San Luis on the west end of the bay that provided protection for Port Harford. By 1910 the largest oil pipeline in the world was at Avila Beach and Union Oil needed a place to ship out the oil. Port Harford, now a safer anchorage than Avila Beach, lengthened its wharf to reach the deeper water needed by oil tankers and soon was carrying most of the shipments of oil. Together with the new pier that was built between Port Harford and Avila Beach, Port San Luis became the largest crude oil shipping port in the world. Repairs were needed in 1915 and then things took a dramatic turn in 1923 when Union Oil announced that all new shipments of oil would be from the newer Pacific Coast Railway Company Pier.

With the loss of oil business the wharf went into a slow decline, a dip in business that dipped even further during the Great Depression years of the ‘30s. There was a brief spurt of activity in the 1940s but eventually fishing became its most important industry—both commercial and recreational. In 1954 the Port San Luis Harbor District was formed and in 1955 the State Legislature granted the Harbor District the area’s tidelands in trust. Eventually the Harbor District acquired the Harford Pier.

In 1967 the Harbor District along with the Wildlife Conservation Board improved access to the pier as well as new parking areas and two Sportfishing platforms. Today the Harbor District continues to oversee and manage the wharf and surrounding lands.`

Hours: Open 24 hours.
Facilities: There is ample free parking near the front of the pier and limited parking on the pier. Restrooms are available adjacent to the pier, as are fish-cleaning stations. Lights are on the pier but no benches. Bait and tackle is available on the pier and a boat hoist is available near the front of the pier. There is also a restaurant on the pier.
Handicapped Facilities: Handicapped parking and restrooms. The pier surface is wood planking with a rail height of 35-42 inches. Not posted for handicapped.
How To Get There: Take Hwy. 101 to the Avila Rd. turnoff and head west; follow the road to the end and the pier.
Management: Port San Luis Harbor District.