Just up the road from the Avila Beach Pier sits the Port San Luis Pier, a pier with a different environment and a totally different feeling. The Avila Beach Pier looks and feels like a southern California “beach” pier; it is as much home to blondes and bikinis as it is to anglers. Port San Luis is where the sportsmen come to launch their boats, or where one buys a ticket for a day of bottom fishing, salmon fishing, or albacore fishing on one of the boats out of Patriot Sportfishing. Here the angler is king. For many, angling right off the dock is both productive and satisfying. 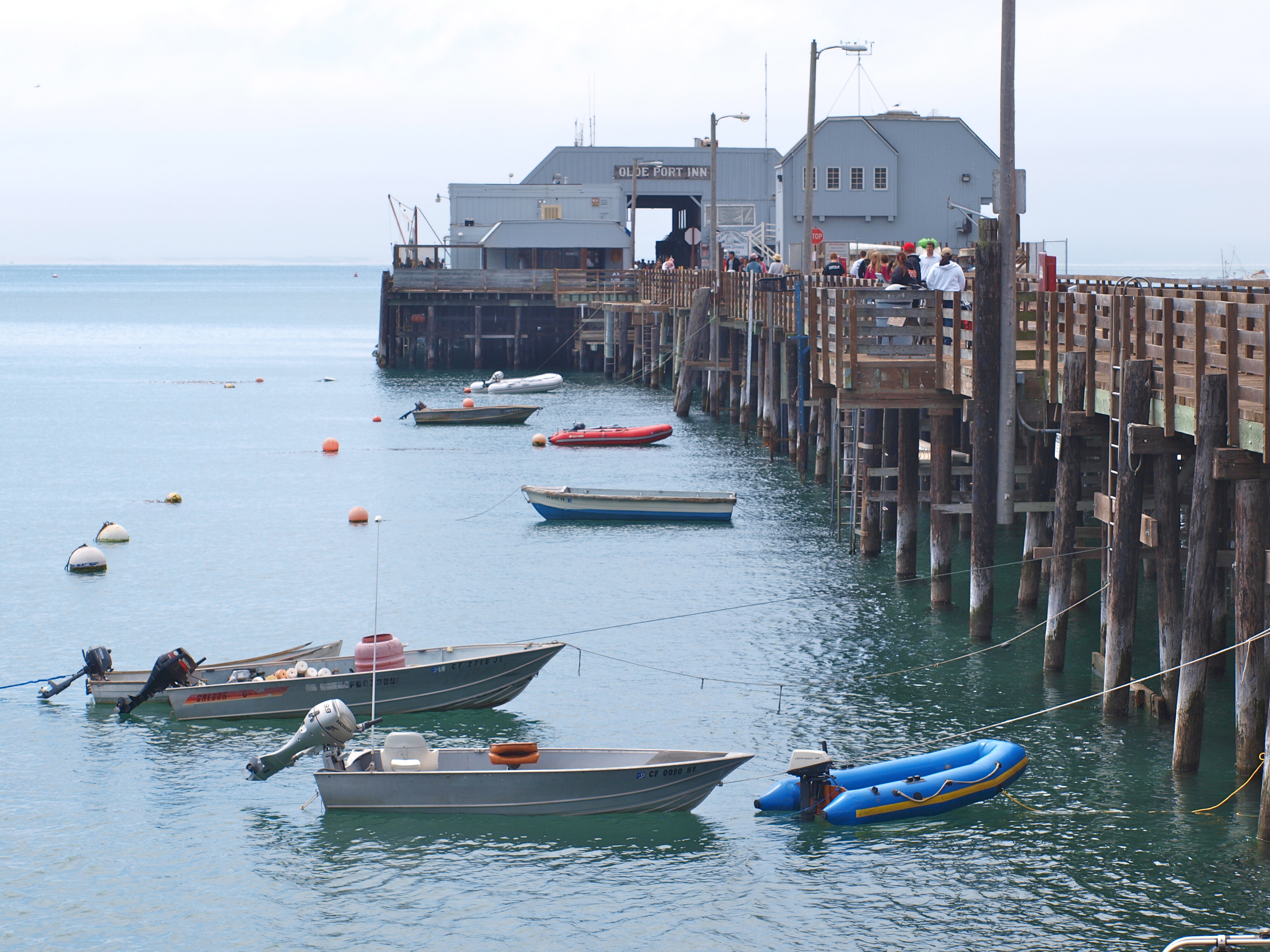 The pier is also the spot where I had one of my most enjoyable nights of fishing. I had arrived at Pismo Beach around 7 p.m., checked into a motel, and had a quick bite to eat. Since I had never fished the Port San Luis Pier, I decided to drive over and give it a short try. I only planned to fish a couple of hours since I needed to be on the road early the next morning.

Arriving about 9 p.m., I bought some frozen anchovies to go along with the mussels in my ice chest. Fishing midway out on the bottom, using anchovies, I began to catch white croaker. I had a bite nearly every cast! Then, as it began to darken, a school of mackerel moved into the water around the pier. They seemed to strike any lure or bait which I threw at them. It was soon time to go, but I kept trying for just one more fish. 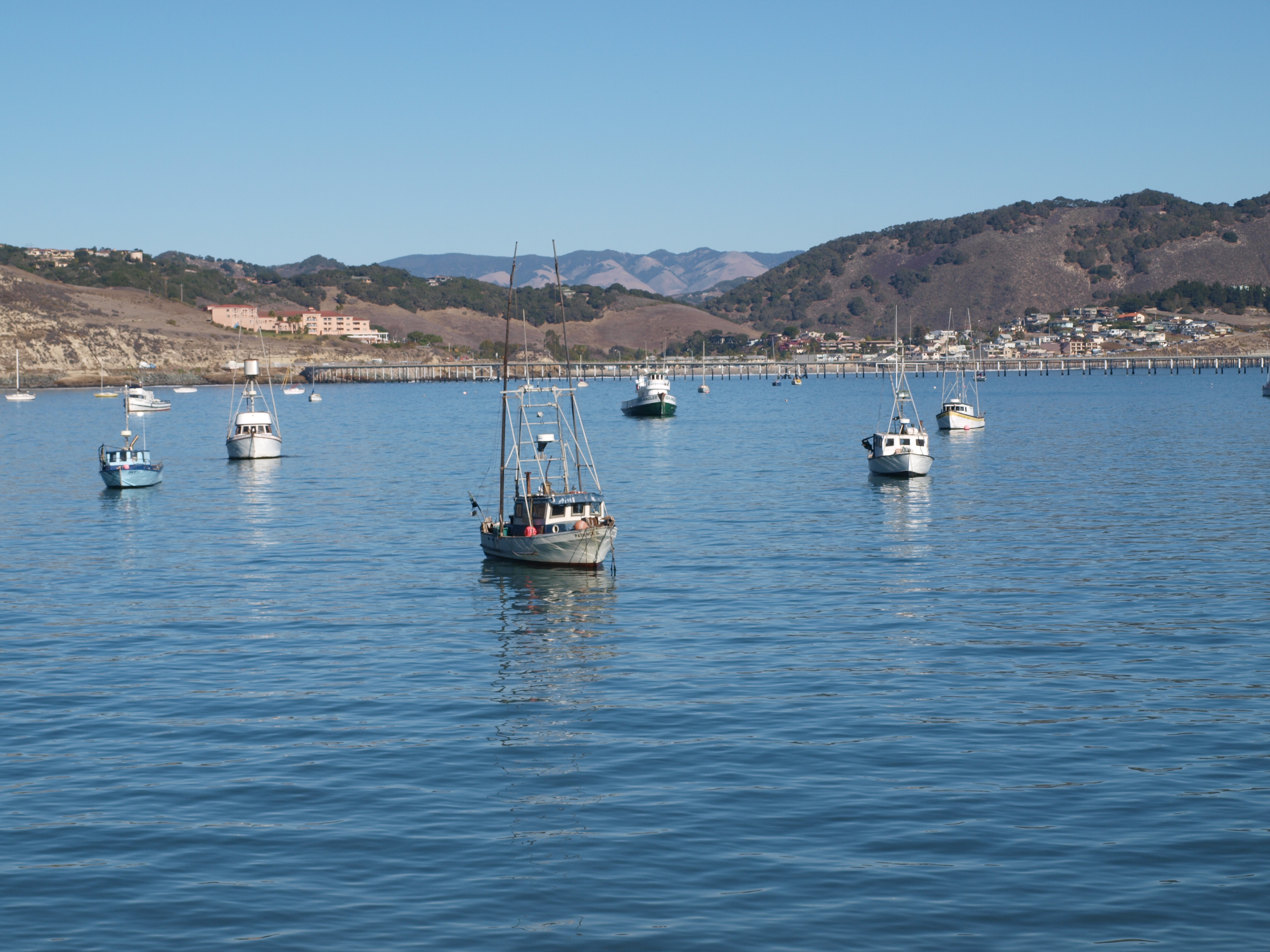 I finally began to leave but on the way out I decided to tarry for just a few more minutes, I wanted to see what might be available by the rocks at the shore-end base of the pier. It was a fortuitous decision. Using mussels and fishing right up against the rocks, I had a hard strike as soon as I dropped my hook. I missed the first strike but not the next. Fishing that spot yielded several kelp rockfish, two of which weighed nearly three pounds. I had fished far too late (because it was nearly 1 A.M. when I finished), but I had caught quantity and quality and experienced a terrific time fishing in the shirtsleeve weather late at night. 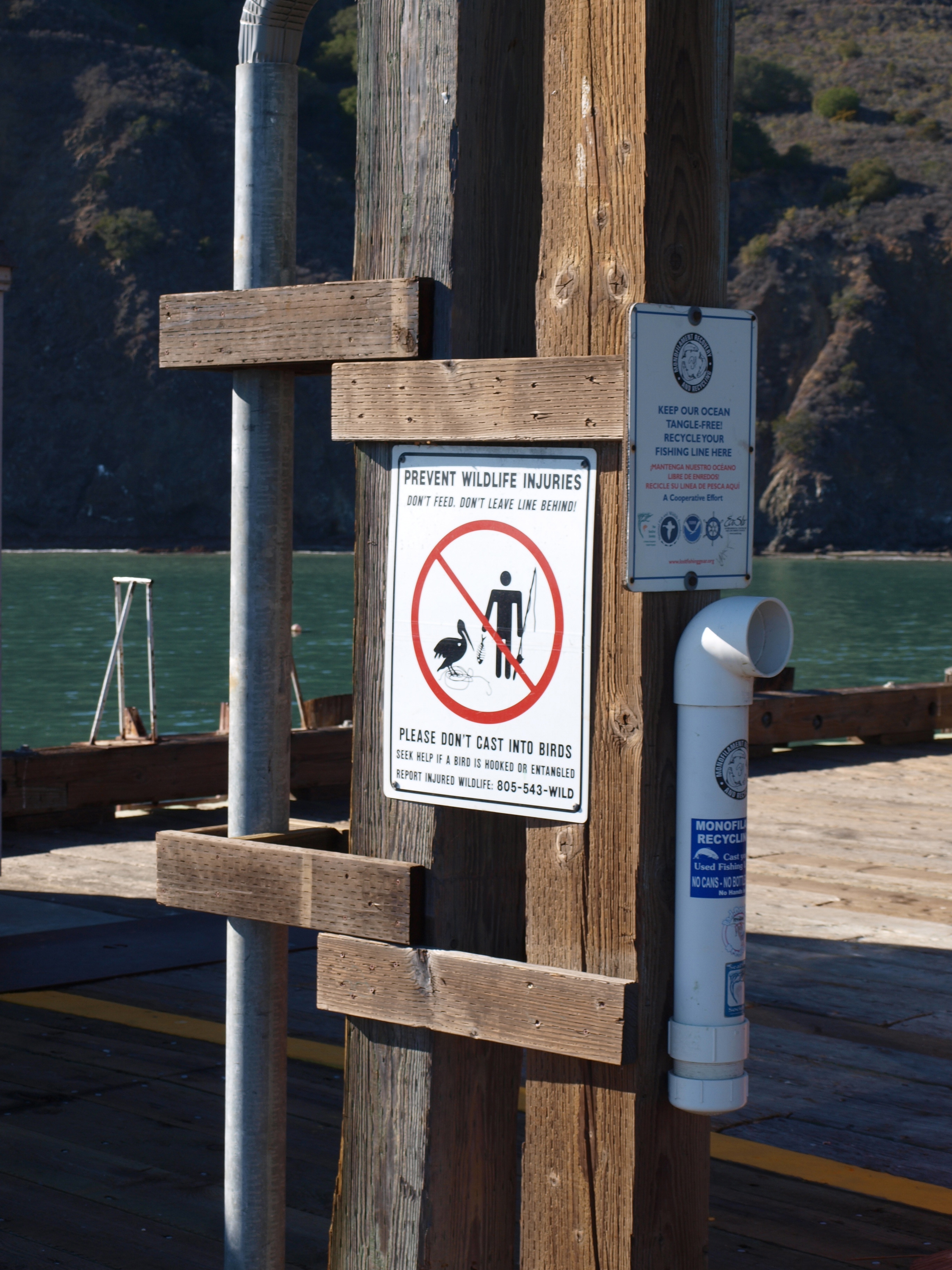 Environment. The pier is 1,320-foot-long, sits at the north end of San Luis Obispo Bay, and is fairly close to and protected from waves approaching from the west by Point San Luis and the breakwater that extends from the point. (However, the pier is wide open to seas from the south and southwest, the direction from which most of the damaging winter storms originate.)

Due to its length, the pier extends out into fairly deep water. Most of the bottom here is sand or mud, although there are quite a few rocks inshore around the foot of the pier. Most summers will see a good growth of seaweed all around the pier and barnacles, mussels, starfish and polyps cover the pilings themselves. At the far end of the pier it is possible to fish under a roof, the only pier to have this distinction in the state and a good place to be when it starts to rain or the wind decides to kick up its heels.

Inshore, you will most commonly find perch and rockfish. However, at times the schools of jacksmelt, sardines and even mackerel will be caught almost up to the rocks. A favorite spot for many is to fish on either side of the Port San Luis Sportfishing office. 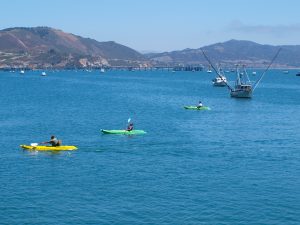 Do remember that Port San Luis is a commercial wharf and that can mean crates, equipment, trucks, etc., sometimes blocking access to spots. In addition there are often quite a few boats and buoys anchored in the water around the pier. These, together with their ropes, can interfere in casting and make it hard to bring in some fish. However, there are also some interesting activities on the pier. For example, out toward the end you’ll find a fish market, the Olde Port Fisheries,. It has a number of saltwater tanks with live fish and crabs awaiting shipment that you can peek into; quite often there will be interesting fish such as sheephead, rockfish, large cabezon, lingcod and a variety of sharks. And, kudos are deserved by those who work on the pier. They seem to go out of their way to not bother the recreational anglers any more than really necessary—thanks! 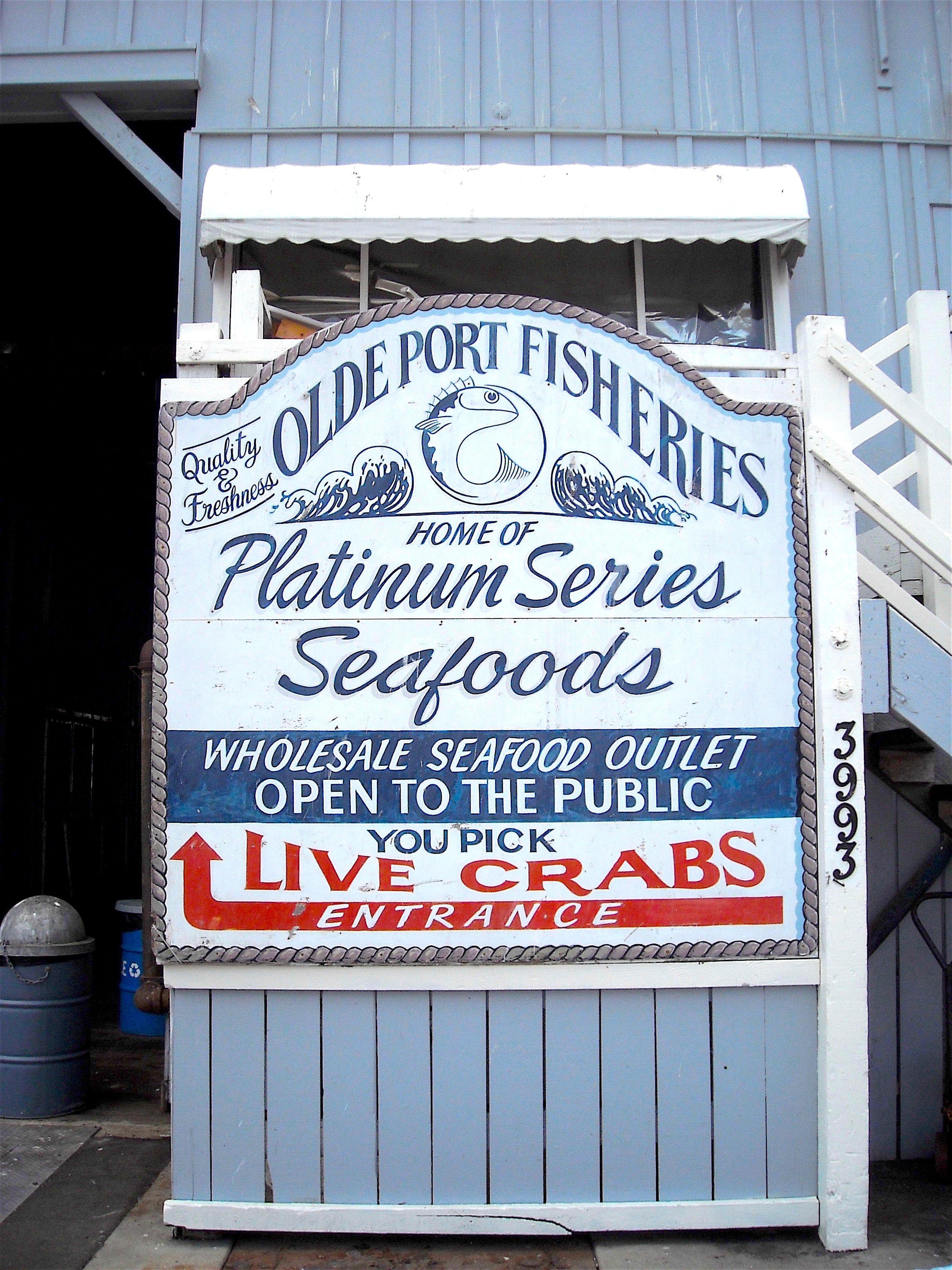 There’s also the door, the door to the sea lions. Mid-day you’ll usually find some sea lions sunning themselves under the pier and you can actually walk down a stairway next to them and take pictures. But don’t do it. Signs warn that the sea lions bite—and they do. Better to hang about five steps or so up from the “dogs and let your camera do the walking. The door by the way is out toward the end of the pier just before you get to the buildings on the right side.

For a number of years, next to the Patriot Sportfishing shop was “The Fish Lady,” a business that proclaimed by way of its sign that it was “The Home Of The Original Thresher Shark Soft Taco.” “The Fish Lady” is history today; however, out toward the end of the pier is an excellent restaurant, the Olde Port Inn. An interesting feature of the restaurant is that some tables have class partitions in them that allow patrons to see down into the murky waters beneath the pier. Perhaps, if you’re lucky, you and your peers can peer down through the glass on the pier and spot a fish or two. Perhaps, if you’re real lucky, you’ll spot a halibut chasing a meal as you’re eating halibut for your meal 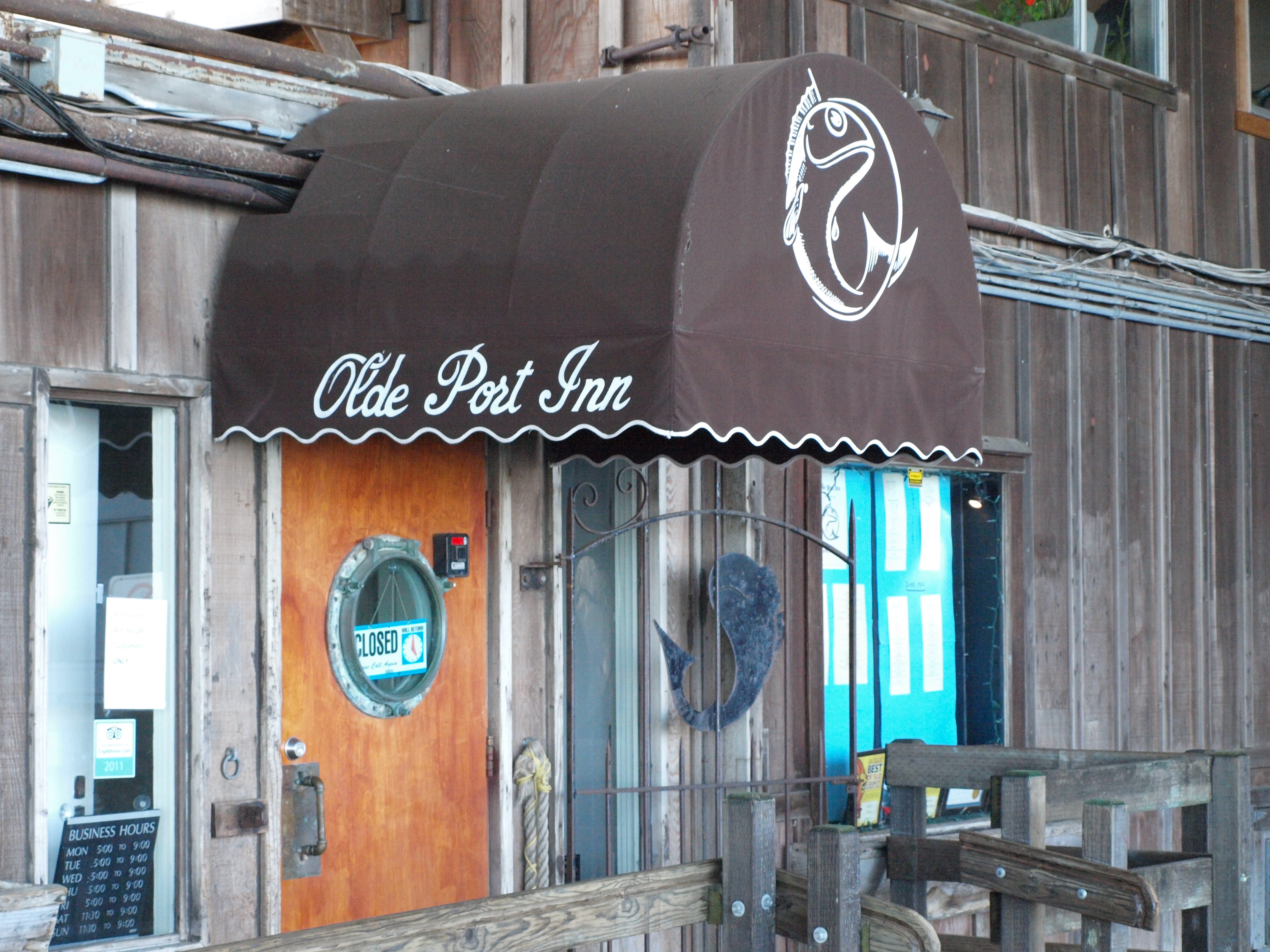 A nice touch is the ability to drive out almost to the end of the pier, near the Inn. However, the parking is limited (12 spaces) so you might wind up being forced to turn around and park near the entrance of the pier (but it’s worth a drive out to check it out).

Fishing Tips. During the hours around high tide, bring some seaworms or fresh mussels and try fishing by the inshore rocky area; a kelp rockfish, grass rockfish, or several varieties of perch may result. Use a single hook on your line, size 4-6, hooks, seaworms, fresh mussels or a small piece of shrimp as bait, and fish as close to the rocks as possible. Look for the natural channels between the rocks that often are filled with food that attract fish. Put your bait into those channels and don’t be afraid to let it be washed into crevices between the rocks. Do however keep a tight grip on the line and be prepared to strike as soon as a fish grabs the bait. You will lose some tackle but once you get the hang of the technique, tackle loss should be minimal. 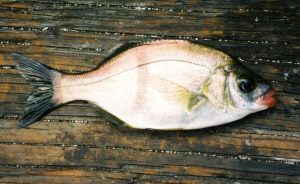 Fishing further out on the pier, using cut anchovy on the bottom, should yield white croaker and several varieties of flatfish including sanddabs, starry flounder, sand sole, and occasionally a halibut. If you really want halibut, go to the Patriot Sportfishing office, buy some live anchovies or sardines, and use these with a live bait rig on the bottom. If live bait isn’t available at the shop catch your own. Small white croakers make good bait and will last a long time on the hook (assuming no crabs grab them); small shinerperch or walleye surfperch will also work. Halibut in excess of 30 pounds have been caught at the pier. Reports also say some halibut are taken on Fish Trap Lures and similar swim baits although there seems to be a lot of gunk on the bottom to catch such lures.

Fishing the mid-pier area, but casting out away from the pier can also yield barred and calico surfperch; for these, try bloodworms or fresh mussels. Fishing straight down by the pilings with worms or mussels should yield a few blackperch, striped seaperch, rainbow seaperch, pileperch and even an occasional rubberlip seaperch. 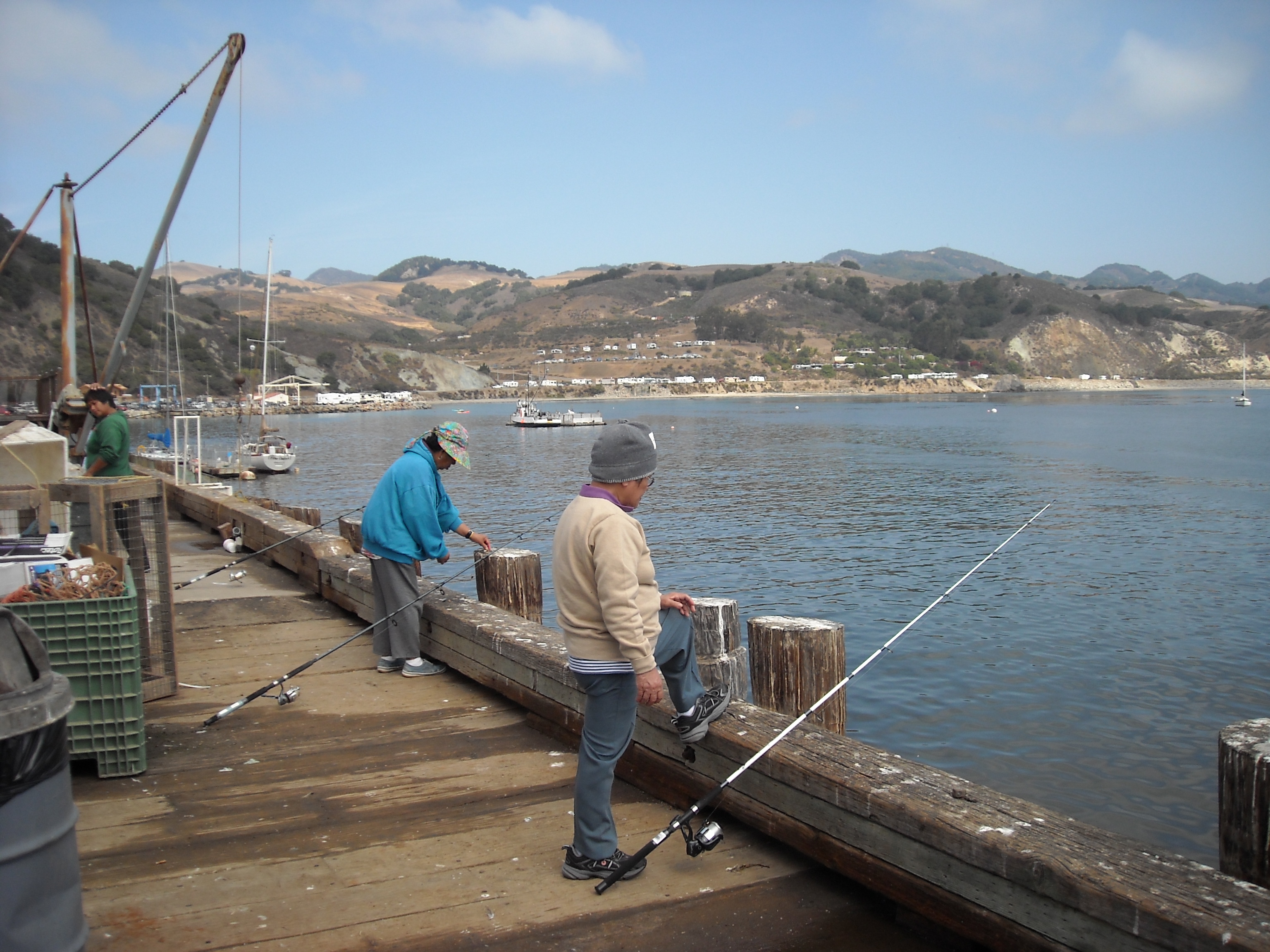 Typically late spring to fall will be the time for the large schools of jacksmelt, sardines, jack mackerel and Pacific mackerel to invade these waters. When they do you’ll see anglers lined from inside the bait shop to far out on the pier. Typically they will either be jigging unbaited Sabiki-type bait rigs or casting baited rigs out under a balloon or Styrofoam float (depends on how the fish are hitting).

Summertime by the way is usually also the time when the anchovies may invade the bay or the squid may go on a spawn, when that happens there should be a lot of fish available to be caught.

Most years will also see a few salmon caught from the pier. A whole anchovy fished under a float attracts the majority of salmon but some will also be hooked on jigs or cut bait; catches may be made mid-pier to the end. Warm-water months (August-late September), especially in El Niño years, may also see a few bonito and possibly even a barracuda or two. Bonito feathers behind a Cast-a-Bubble work for the bonito, spoons or jigs work for the barracuda. I still have newspaper accounts of the 6- to 13-pound bonito that showed up in August of 1984 together with some barracuda.

Casting out from the end of the wharf usually yields white croaker and sand dabs, Fishing  down around the pilings by the end, will yield several varieties of perch including blackperch, rubberlip perch, rainbow seaperch and, most numerous, walleye and silver surfperch. The first three perch will be on or just above the bottom, the walleye and silvers will usually be mid-depth. Drop the rig to the bottom and if you don’t get a bite bring it up a couple of feet and continue to check the depth until you start to get bites. Rockfish too inhabit the area under the pier and by the pilings, Many species can show up:   gopher rockfish, olive rockfish (Johnny bass), brown rockfish (bolina), blue rockfish and others. It’s also an area for cabezon and (usually small) lingcod. You might even see a wolf eel; one was caught in 2006. 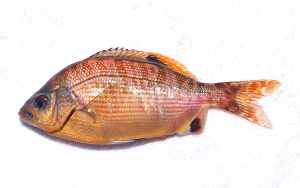 Although the pier does not seem to get the same number of shark fishermen as other local piers, some sharks are caught. Most of the sharks that are landed are smoothhounds and leopard sharks along with the closely related bat rays and skates. Swell sharks (locally called puffer sharks) are fairly common here even though they are rare at most piers. In June of 1997, a 12-foot thresher shark was landed at the pier (body six feet, tail six feet), so sharks are around, and some are good size. The problem though is that with all the various lines and craft around the pier the landing of big fish can be quite difficult; most shark hunters prefer the nearby Avila Pier.

Less interesting to catch are the sea stars which sometimes seem to cover the floor of the adjacent waters and are quick to grab hold of a stationary bait sitting on the bottom. In contrast, and of intense interest, was the catch and release of a two-foot-wide sea turtle in September of the warm-water year of 1997. 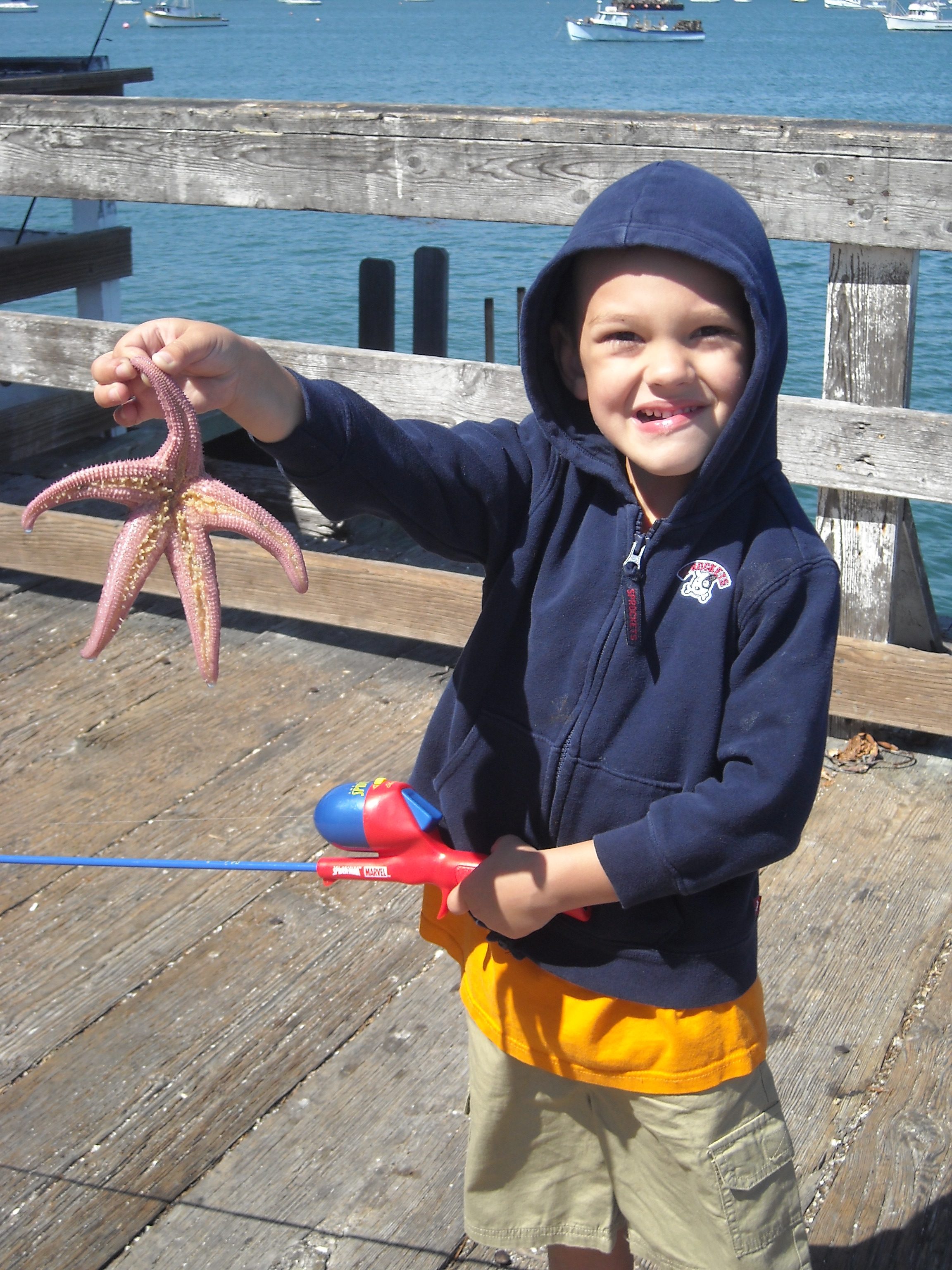 Grandson Adam and a Sea Star

15-year-old Rusty McCord made a surprising catch on March 30, 1999. After buying and being shown how to use a small-hook bait rig he preceded to go jigging behind the tackle store on the pier. The result was a 9-pound starry flounder, a huge flounder for any pier and doubly interesting because it was caught on a bait rig. He wasn’t alone!