This somewhat out-of-the-way pier is located in the pleasant Port Hueneme Beach Park. It has a weird zigzag shape, is made of wood, and presents, on clear days, a view of the not-too-distant Santa Cruz and Anacapa Islands. Pods of dolphin are a common sight swimming near the pier, whales a sometimes sight, and both seem to stimulate excitement whenever glimpsed. It is also a very good family pier; I have rarely visited the pier without at least a few children being present. It is also the only pier that I have seen where a sizable number of the local anglers (adults and kids) ride their bikes out to the end of the pier to go fishing. Most piers today do not even allow bikes to trespass on their hallowed surfaces. In today’s society, with its dysfunctional families and over regulation, it is nice to see such a user-friendly environment. By the way, the correct way to pronounce Port Hueneme is Port Why-NEE’-me. 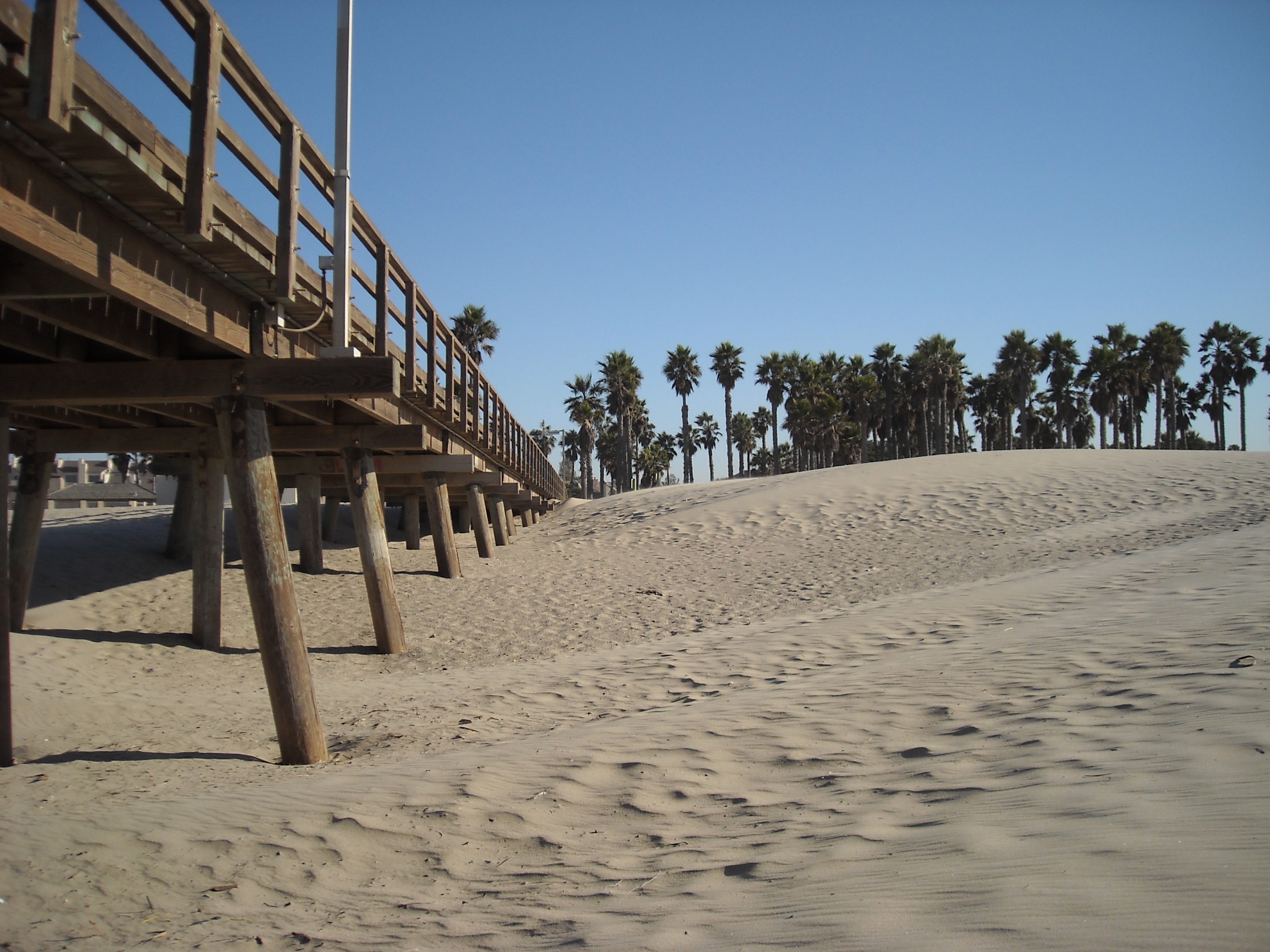 Environment. The pier is 1,400 feet long, 24-feet wide, and sits just down the shoreline from the Hueneme Submarine Canyon, one of only five such canyons easily accessible along the southern California shoreline (the others being La Jolla, Newport, Redondo, and Point Dume). The pier extends out into water that is 22 feet deep, and has been, since opening in 1968, one of the main recreational venues for local anglers and their families. The bottom here is primarily sand, pilings are generally well covered with mussel, and in the summer there is often a considerable growth of kelp and seaweed around the end of the pier. 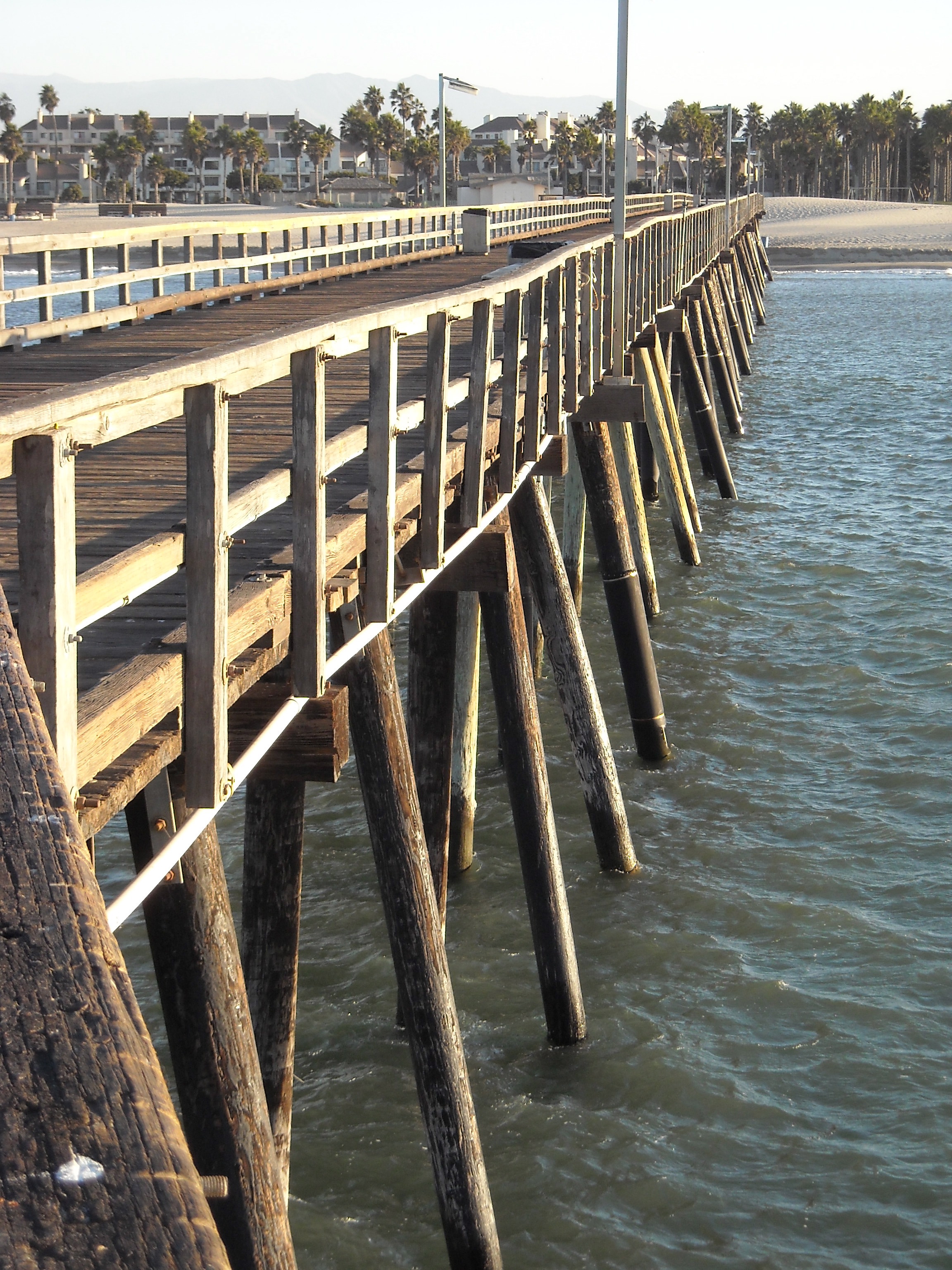 Fish. Inshore, there is some barred surfperch action but it is not especially good nor is the action on yellowfin or spotfin croaker. Further out, in the mid-pier area, anglers cast out bait for halibut, white croaker, thornbacks, guitarfish, and bat rays, or jig with bait rigs for small smelt, shinerperch and queenfish. The end area sees all of these plus more Pacific mackerel, jack mackerel and sardines. A few bonito and barracuda will be caught every fall, September to November, with the barracuda generally hitting during the evening hours. The pier does seem to be a very good spot for large bat rays but shark stories are less frequent. 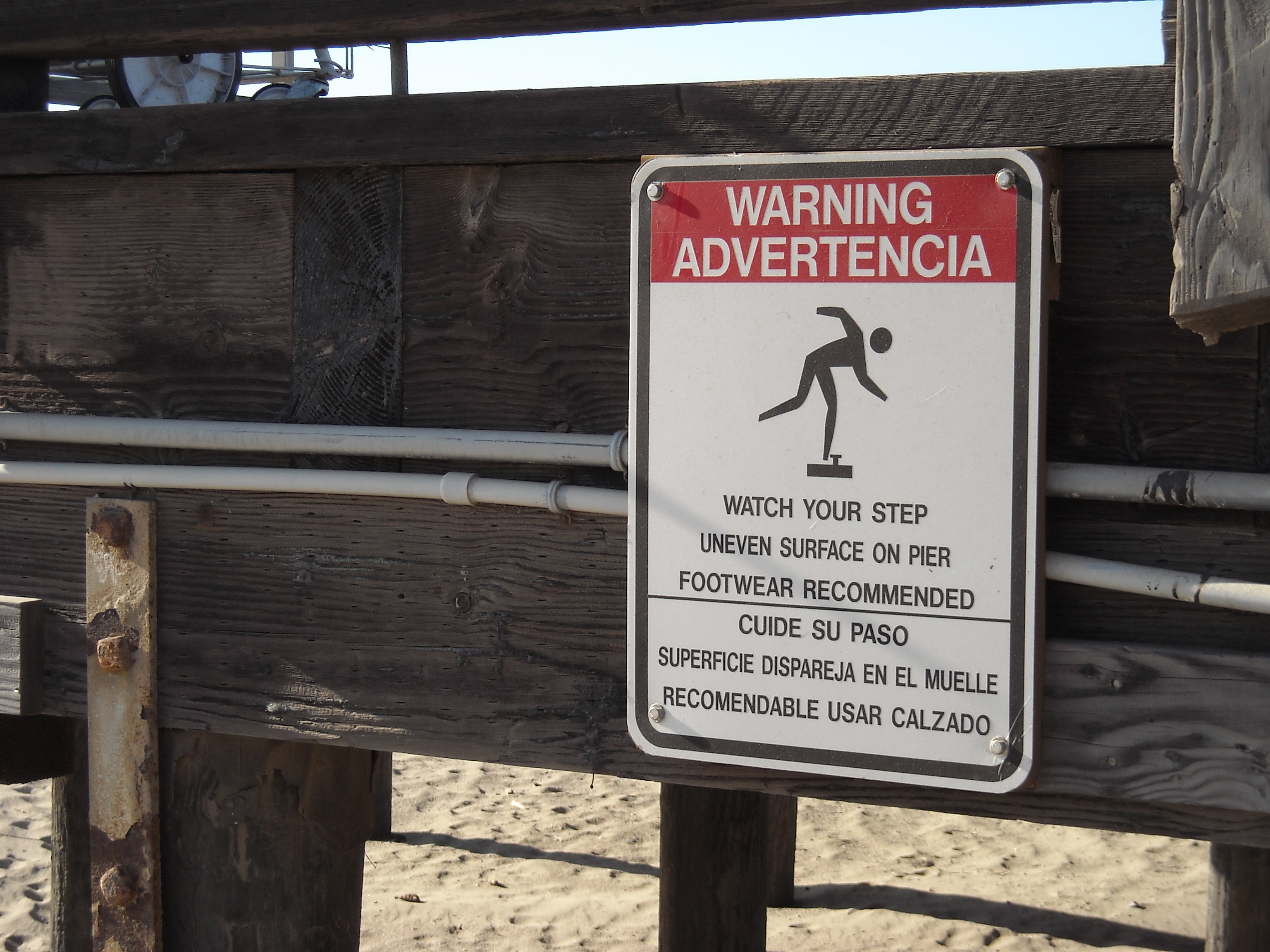 Crabs and lobsters would seem to have a natural home at the pier but only the former are taken in an appreciable number. Some rock crabs are taken while the big, ugly, and hard-to-clean sheep crabs (spider crabs) are a frequent and favorable catch at the pier, favorable simply because they’re good eating. Lobsters, bugs, spinys, whatever you want to call them, are far less common (although a few are taken each year).

The “Bible” on the pier is similar to many piers located near submarine canyons and the upwelling associated with such areas. Thus better than average action on pelagics—jacksmelt, sardines, and mackerel—and good fishing for the larger sharks and rays. However, the inshore action may be somewhat diminished and rarely are these piers great for the shallow-water croakers and perch. The result is that you will often see people filling buckets with small fish but proportionality you may see fewer of the big inshore fish than at piers in shallower, sandier environs. 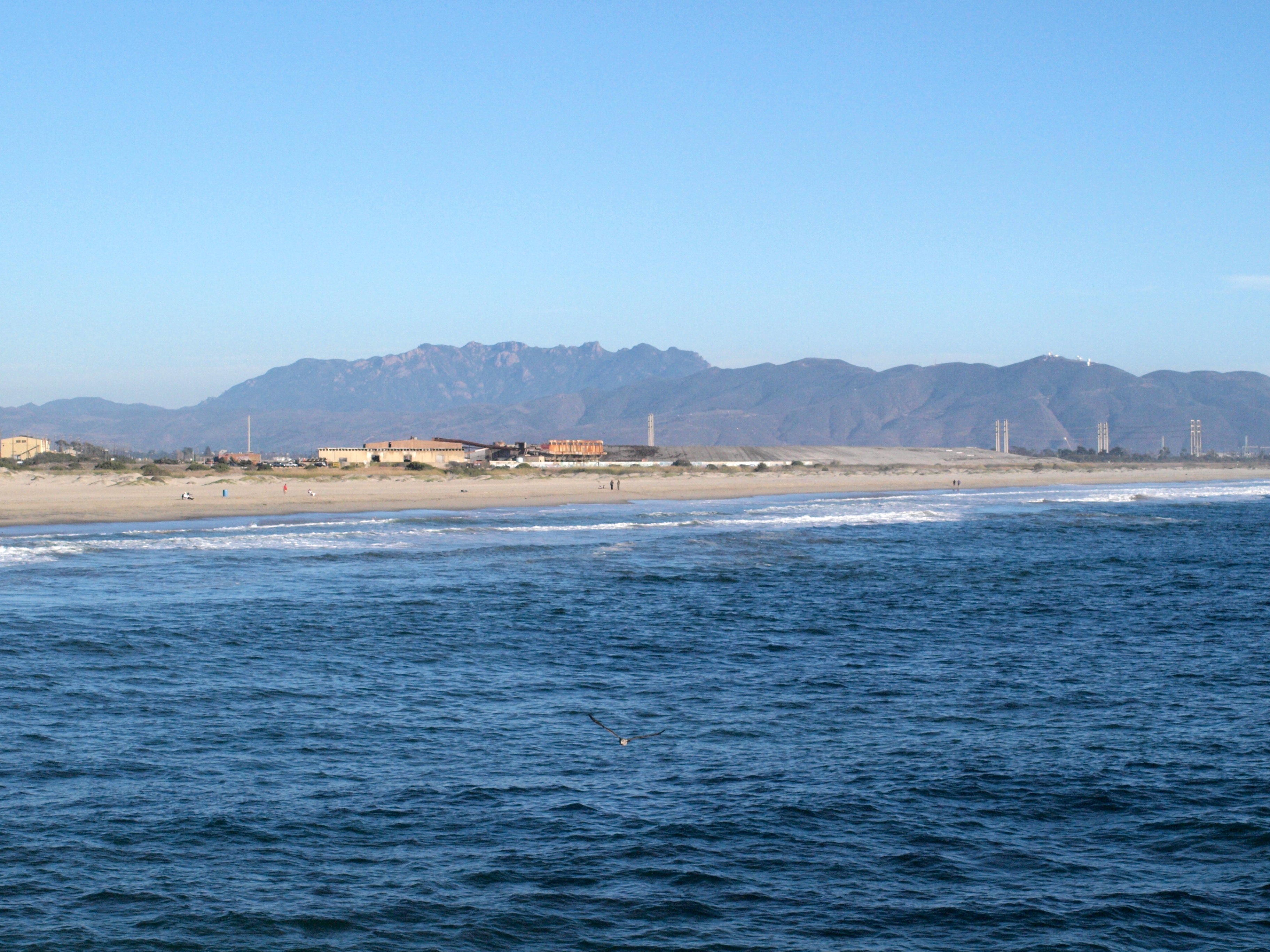 Fishing Tips. Since live bait is not available, most anglers use frozen anchovies, mussels, squid or mackerel when fishing both the inshore and mid-pier areas; all seem to produce. Inshore action will produce a few barred surfperch (especially during the winter months), some croakers (especially July-September), and bottomfish like banjo rays (thornback rays), shovelnose sharks (guitarfish) and skates. Live sand crabs are part of the normal culinary menu for perch and corbina (when they show up). The perch and croakers both like live seaworms (bloodworms and lugworms), fresh mussels and ghost shrimp (if you can find them). More and more perch are also being landed on grubs, primarily root beer or motor oil colored w/red flake, although the Berkeley sandworms have become increasingly popular. The sharks, skates and rays will hit almost any bait although a bloody piece of mackerel, strong smelling piece of sardine, or tough piece of squid is hard to beat. As at many piers, small staghorn sculpin, aka bullheads, can be a nuisance grabbing almost any bait, often including those way out of proportion to their size. Just remember that they also serve as food for the larger species. 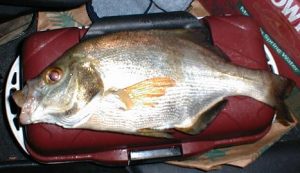 Mid-pier to the end, especially in the depressions between the pilings will produce most of the halibut and the bait the regulars most commonly use is a small live bait—smelt, shinerperch, queenfish or sardine. Several large halibut have been taken including a 30-pounder in January of 2000 and a 26-pound, 36-inch fish in August of the same year. An occasional sea trout (small white seabass) will also hit on these baits; if so, make sure it is legal size.

In the deeper waters of the pier use cut anchovy or seaworms to fish for white croaker, starry flounder (in the winter), sand dabs, and an occasional bass. Cold-water years will also often see schools of lizardfish move into the area. Live bait can be used for halibut but a shark or ray is more common. Small jack mackerel and Pacific mackerel can sometimes be used for the larger sharks. Use artificials if and when the bonito and barracuda show up; bonito seem to prefer a feather trailing a splasher or cast-a-bubble, while the barracuda sometimes go absolutely giddy over shiny spoons, especially gold spoons like Kastmasters. Some years will also see a few yellowtail landed, generally in the warm water months of September or October (although there was an unusual run of yellowtail in January of ’98). Live Spanish jacks (jack mackerel) are eye candy and the primo bait for their larger jack cousins.

The smaller pelagic species are one of the most consistent catches at the pier. When the schools are in, Pacific mackerel, jacksmelt, Pacific sardine, and jack mackerel can be caught from most areas of the pier. The standard rigging is a multi-hook bait rig with most of the regulars using the locally produced Filipino jigs (a leader with 6-8 yarn enclosed hooks—sort of like a long Sabiki leader). And, I must admit then when I’ve been at the pier they seemed to out fish other multi-hook-type rigs. These Filipino jigs are generally available at the bait shop at the foot of the pier.

This pier, like most, also has its “shark specialists.” Several good-sized shovelnose guitarfish and leopard sharks have been landed, as have several humungous (new ‘90s word) bat rays. I haven’t heard of too many other species of sharks being caught although a few thresher sharks should be around. As usual, the sharks like a bloody piece of mackerel or squid, while the bat rays prefer squid. Best results seem to come from the mid-pier area. 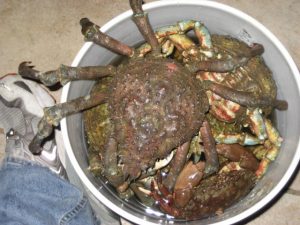 As mentioned, this is an excellent pier for spider crabs. Few people actually seem to seek out the big crabs with crab nets, but they should, and the end area seems to be the top producer of the crabs.

Dear Ken, I would like to share a humorous story that I’m sure you’ve heard many a time. Maybe it should be a warning to many novice fishermen.

I told you I was going to Port Hueneme. Well, I did. I got there about 8 in the morning to get a good tide. I was catching my mackerel and surfperch for bait. A complete ‘newbie’ was to my left as I was at the end of the pier facing out. Well, he didn’t have any sinkers to weigh his line down and kept floating across everyone’s lines. I told him to use one so as not to upset the rest of the pier. Meanwhile, a guy to my right at the end of the L portion of the pier kept hooking into stingrays and letting them take his hook to the complete opposite end (south) of the pier crossing everyone’s lines there!!! I was getting pretty discouraged. I told him to keep his tension tighter so it wouldn’t run so much. He finally lost it. Well, I finally put my 9′ surf rod with Penn 500 reel back in the water (cast out about 40-50 yards) and got my spinning rod back in my hands with a bonito jig just to see what I could stir up. Well, the guy to my left lost the sinker he had and I wasn’t a local tackle shop. His line kept drifting in front of me. I decided to go to the rail behind me, facing the shore to try my jig. Well, I got it cast out, started reeling in and I heard “Hey!! Whose rod is that” I turned around and it was GONE!! SH..! My whole surf setup was just taken by something quite large. Yes, I forgot to tie it to the railing. We all learn by our mistakes, don’t we?

Well, Ken, that’s my wonderfully humorous (now, not then) story. I hope you enjoyed this little event. Oh, by the way, the rod setup belonged to my brother. He laughed a little as well. Just thought you’d get a kick out of it. Take care for now. Thanks, Patrick W

Do you know anything about the effect El Nino has had on our fishing? Went to Port Hueneme with a bunch of friends and ended up with about twenty poles in the water. Not a single decent fish! Combined, we managed to catch probably about 25 thornbacks (a couple were big enough to eat but it wasn’t worth the hassle of cleaning them). Other than that, there were millions of little crabs in the water. Every ten minutes there were 10-20 little blue and rock crabs in my drop net and two to three hanging off my bait. If these little crabs all get bigger, there is going to be some good crabbing this summer! Good fishing, Rob

Date: May 18, 1999; To: PFIC Message Board; From: Brent; Subject: Port Hueneme halibut and sharks

Port Hueneme Pier is kicking butt some days and some days not. For the past two days there has been a real high tide and with that the halibut are biting OK. Two legals caught within a two-hour period 12:30-2:30…as long as you have a small live bait. There are plenty of smelt, sardines and mackerel in the water and the thornback sharks and small leopard sharks are doing good between 6 am and 10 am…then 5 pm till 11 pm. A couple of nice size thornbacks caught today 3′ 1/2 and 4′ ½. To catch the small bait use a Lucky Lura or Filipino jig you can buy at the bait shop at the beginning of the pier; also some crabs still being caught…tons and tons of small ones…some legals… have fun fishing here… I’m always there

If you guys like catching halibut…they’re getting them out here in Port Hueneme pier. Use SMALL live smelt. I usually get 2 hookups a day..3 hours…and most landed are legal. This lady on the pier hooked a big one over 10lbs. A flattie on a bait jig and I was bringing it up and the line snapped. They’re out here…if you have the time… GET OUT HERE. I don’t know how long it will last… they have been biting for about 2 weeks now. Good luck. Brent