Species: Sebastes serranoides (Eigenmann & Eigenmann, 1890); from the Greek words sebastes (magnificent), and serranoides, a combination of Latin and Greek words (resembling a bass).

Identification: Bass-shaped and often mistaken for bass, especially kelp bass. Readily identified by the different shape of the dorsal fins (in bass, the third to fifth spines are much higher than the other spines). The coloring is olive-brown with light areas under the dorsal fins; light brown or olive-brown on the sides; light blotches on the back. Fins range from olive to bight yellow. Olives are similar in appearance to yellowtail rockfish and often mistaken for them. However, olives do not have reddish-brown speckling on the scales as do the yellowtail rockfish and the caudal fin is generally greenish-yellow instead of just yellow.

Habitat: Recorded to a depth of 572 feet but generally they’re a mid-water species found in shallow-water kelp beds, often mixing in with schools of blue or black rockfish. Adults primarily feed on small fish (including juvenile rockfish), small crustaceans (including krill), cephalopods (including squid and octopi), isopods and worms. Both juvenile and adult fish may feed primarily at night (when more octopi are roaming around), but it’s less clear with the adults. Olives are known to compete for food and shelter with kelp bass. They’re also a resident species rarely moving more than a mile from their home territory. 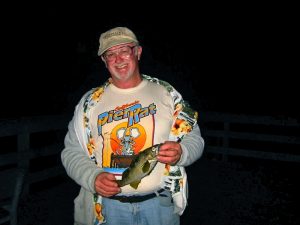 Pierhead (Boyd Grant) and an olive rockfish from the Goleta Pier

Bait and Tackle: Light to moderate tackle, high/low leader and size 6 or 4 hooks seem to work best for these fish. Although they prefer live anchovies, they will hit ghost shrimp, bloodworms, and small strips of anchovy. They also will hit artificial lures such as swimbaits.

Food Value: An excellent eating, mild-flavored fish that is suitable for mny types of cooking.

Comments: An attractive rockfish that is rarely abundant at piers but which does visit most of the piers between Port Hueneme and Cayucos each summer. Historically an important recreational fish from southern California to Fort Bragg, especially in the Santa Barbara area, but numbers have decreased dramatically in southern California since the 1980s (83% decline between 1980 and 1996). One cause may be the drop in the numbers and size of kelp beds, when beds of Macrocystis decrease so do the number of olive rockfish. The fish live to at least 30 years with a few fish becoming mature (and reproductive) at 11.3-11.7 inches in 3 years, 50% at 12.9-13.7 inches and 5 years, all mature by 15.2 inches and 8 years. They are considered one of the fastest growing rockfish.