What surprised me was that after just seeing the injured and dead pelicans she would suggest that I feed the pelican. Some people just don’t connect the dots.

In 1968, Morro Rock was declared a State Historical Landmark No.821 and after 80 years (1889-1968) quarrying of the 576-foot-high, long extinct volcano was halted.  In the future only nature would alter the looks of the “Gibraltar of the Pacific,” simply called “The Rock” by most locals.

Today the Embarcadero remains the center of the tourist activity, the main support for the city, and the home of Morro Bay’s fishing piers.

Facilities: Parking is available nearby on Embarcadero. The pier is adjacent to a small park that has a grassy lawn area, a large anchor monument (in tribute to fishermen lost at sea), several benches, and picnic tables. There are no restrooms, bait and tackle facilities, fish cleaning tables, or food establishments in the park or on the pier but there are numerous restaurants and rest rooms along the Embarcadero.

How To Get There: Located at the corner of Dunes Street and Embarcadero. 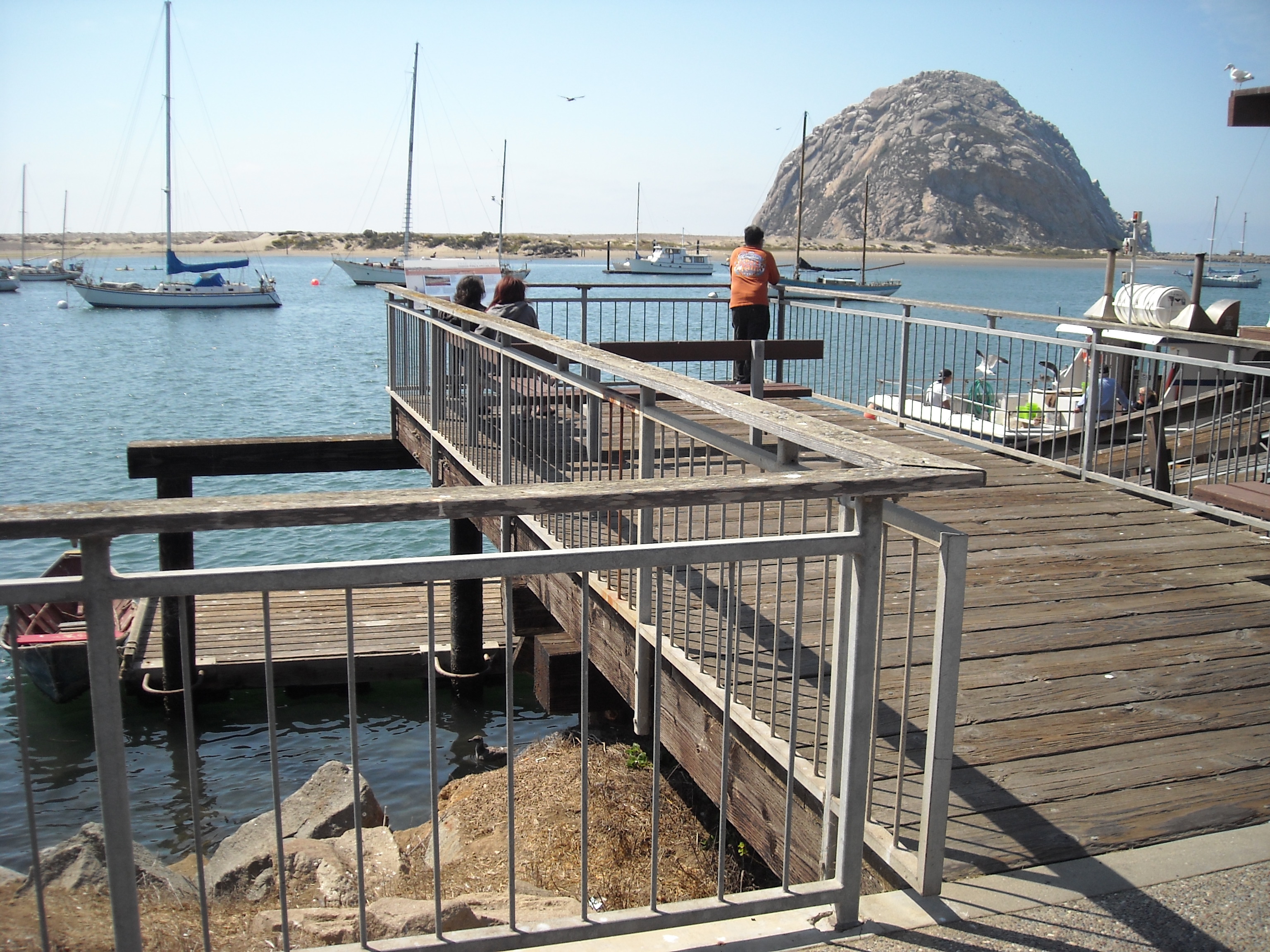 This is an attractive spot with Morro Rock looming off in the distance but the environment itself makes this a difficult spot to fish.

Environment. Technically this is a fishable platform but realistically it’s very difficult to fish due to the dock that sits in the front of the pier, a dock that you are not supposed to fish from. Thus, if you do hook a fish you need to circumvent your way down to the dock, land your fish, and then bring it back up to the pier.  The bottom line is that it is easier to fish off of one of the other piers along the Embarcadero.

Fishing Tips.  Only fish here is the other finger piers are filled with anglers. 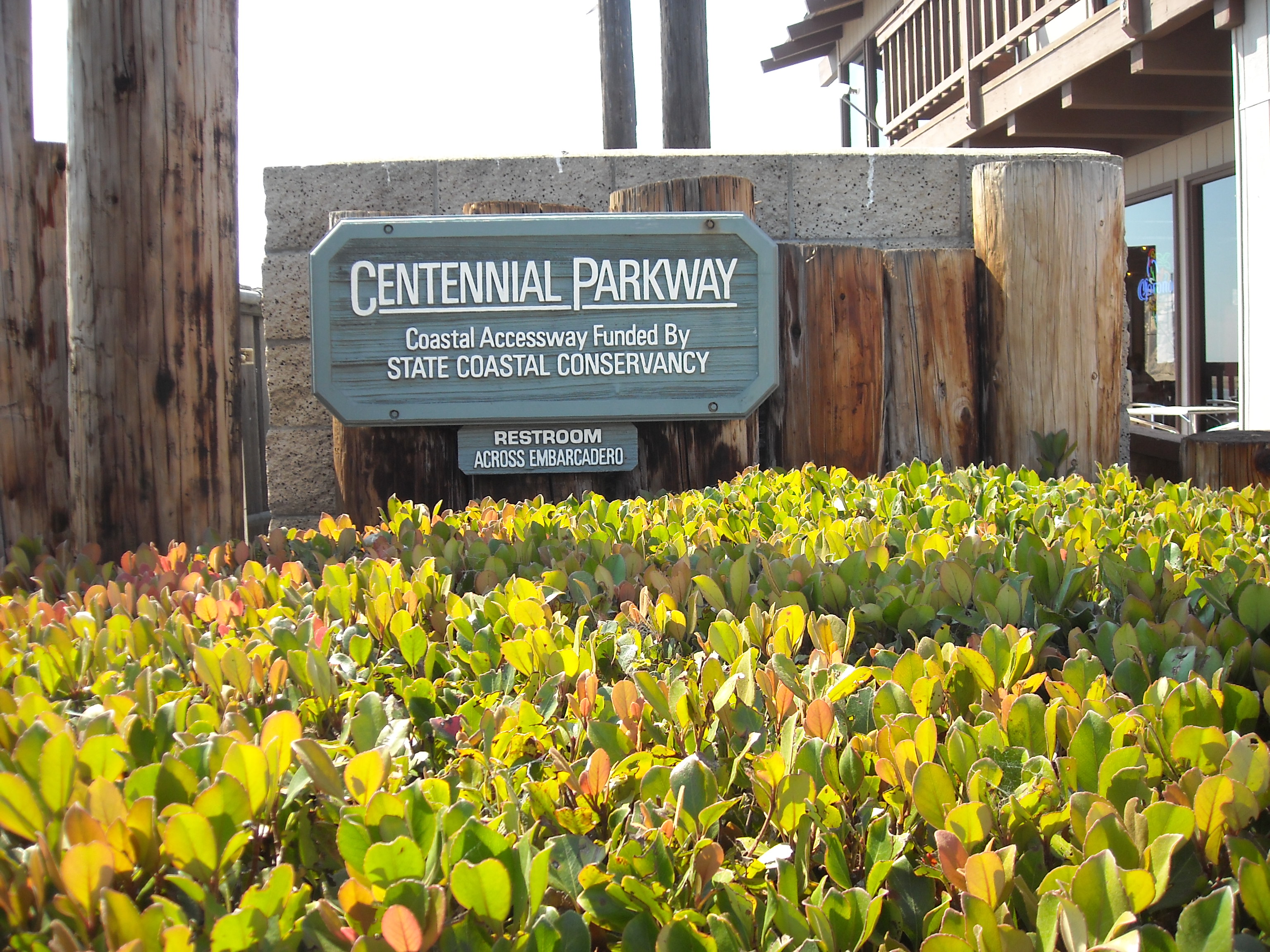 Facilities: Parking is available nearby on Embarcadero. Restrooms are found across the Embarcadero.  There are no lights, bait and tackle facilities, or fish cleaning tables.

How To Get There: Located at the corner of Centennial Parkway and Embarcadero. 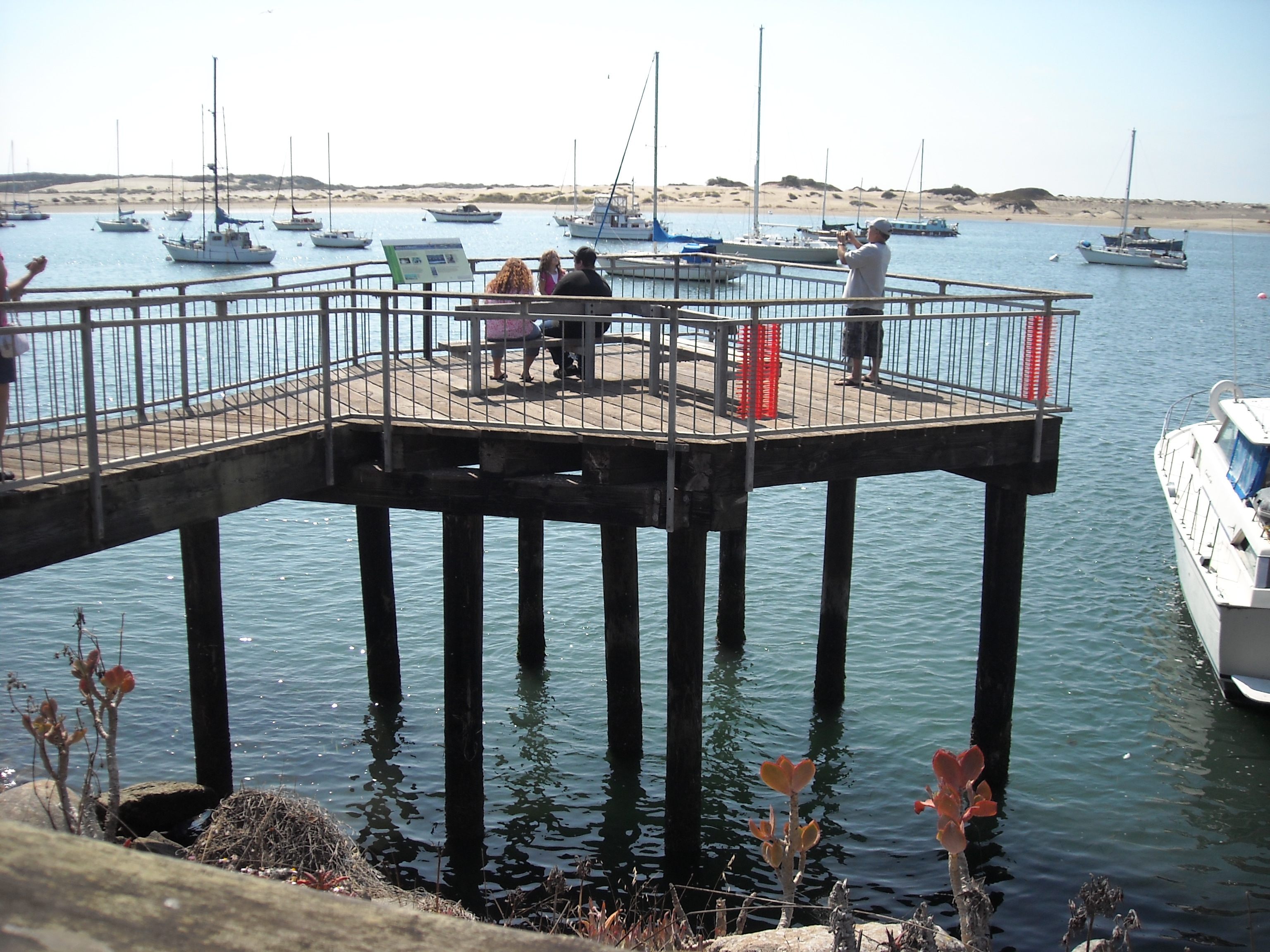 This small pier, really a viewing platform used by some as a pier, sits just downshore from the two previous piers. It’s located next to the Morro Bay Aquarium and presents a great view of Morro Rock and the three large stacks of the Duke Power Plant. 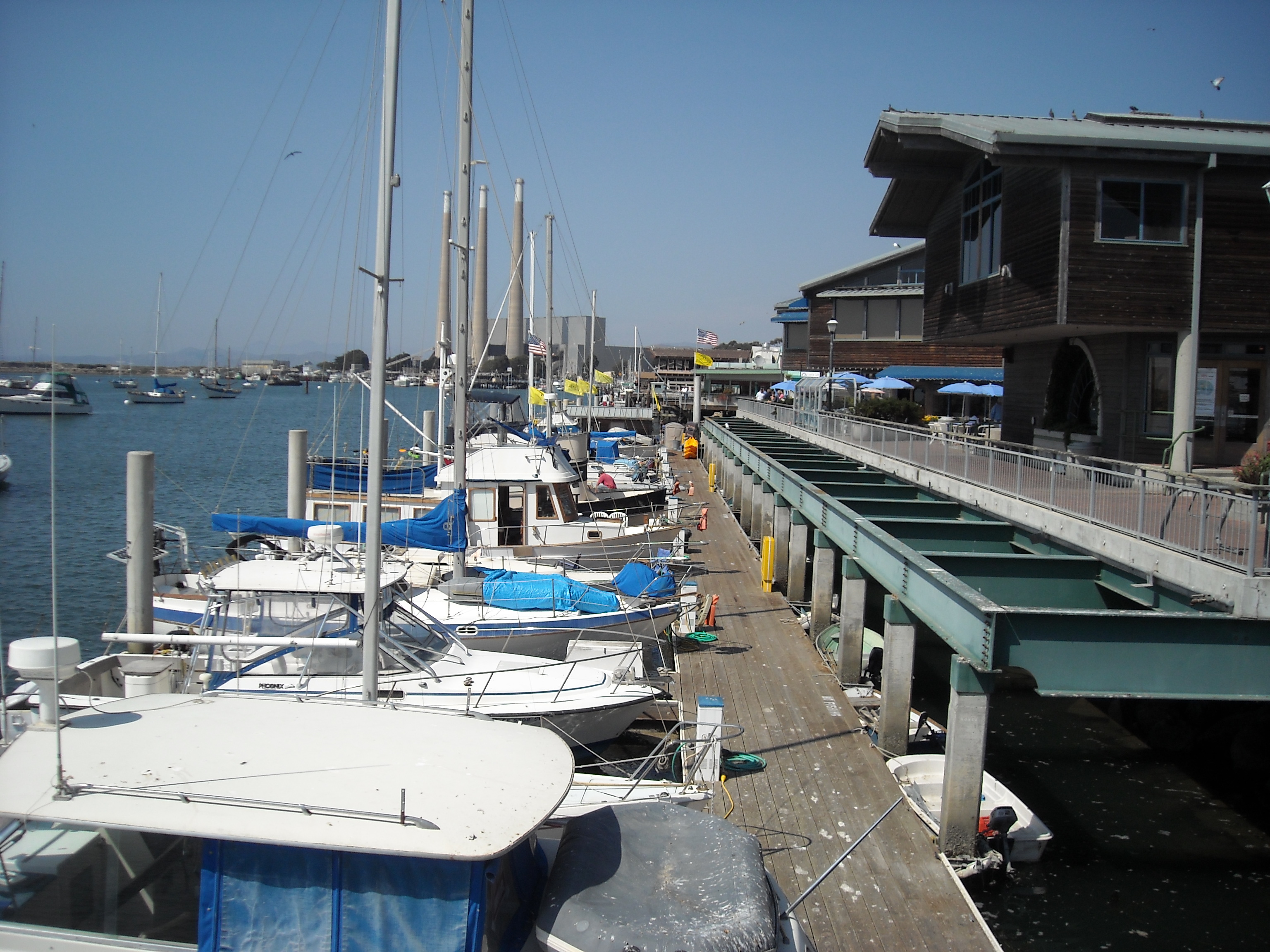 Environment. Inshore there are some small rocky areas to fish while off to the left a short cast presents an additional rocky area. But be careful since there are also fences and obstructions in the water. The end is open to casting but be careful on the right side since there are docks and always boats attached to those docks. The bottom is mud and, like the other piers along the Embarcadero, eel grass can be a problem during flood stage in the bay.

Fishing Tips.  Ditto the information given for the Dunes Street/Anchor Park Pier.

Facilities: Limited, free, three-hour-parking is available near the front of the pier with additional parking available on the Embarcadero. Two benches and a trashcan are found on the viewing platform. There are no lights, bait and tackle facilities, or fish cleaning tables but rest rooms can be found along the Embarcadero. If fishing is dead, head over to the Aquarium, they have some interesting fish in their tanks.

How To Get There: Located at the corner of Marina Street and Embarcadero.

History Note—Morro Bay And The Embarcadero. In 1864 Franklin Riley moved to Morro Bay and built the area’s first house. Next, in 1870, on a homestead of 160 acres, he founded the town of Morro Bay and built a wharf on what would become the Embarcadero. That first wharf was joined by a larger wharf in 1873 and then a railroad pier shortly thereafter. The wharves were primarily used to ship local produce—wool, potatoes, barley and dairy products—and even though the entrance into the bay was a dangerous one for boats, the Embarcadero became the main center of Morro Bay commerce.

Challenges emerged in 1875 when the Embarcadero saw competition from the new wharf at nearby Cayucos. Many of the coastal ships preferred to stop there instead of confronting the hazardous entrance into Morro Bay. Commerce slowed but Morro Bay continued its growth well into the 20th Century both as a small town and a center for tourism, today’s main industry.

In 1933 the WPA changed the face of Morro Bay forever. Although Morro Rock was originally surrounded by water, the WPA began construction of a large jetty and built a road across the north end of the harbor to connect Morro Rock with the mainland. The jetty closed the north entrance into the bay, but the south channel was dredged, and a breakwater protecting the entrance was constructed.

With a safer entry into the bay the number of commercial fishing boats calling Morro Bay increased and by the mid-’30s Morro Bay had become an important center for fishing. Large amounts of rock cod, sole, halibut, salmon and albacore were brought into port.

By 1940 the U.S. Navy had begun training operations for LCVPs in Morro Bay and a base was constructed where the Duke power plant now stands; World War II saw an expansion of those Navy operations and also saw a breakwater built on the southwest side of the Rock in 1944-45 to protect the landing craft entering and leaving the harbor.  Soldiers, many who would be at Normandy on D-Day, would come over to Morro Bay from Camp San Luis Obispo to practice loading into the LCVPs.

In 1953, PG&E began to build the large power plant that would eventually provide much of Morro Bay’s tax base. Today the Duke Energy Company runs the plant and plans are underway to modernize the plant—if agreement can be reached. In the meantime the plant produces a limited amount of power under contract to PG&E and the tax base of the city has fallen.