Closed since 2014 — Waiting for the state to do something

Back in 1769, soldiers of the Portola Expedition shot a seagull at this windy spot and then named their campsite “La Gaviota” (Spanish for seagull). Today, there is still a lot of wind, a lot of sea gulls, many, many campsites and this popular small pier. However, the pier has been closed since 2013 while waiting for repairs by the state.

A mid-summer visit in 1990 was one of my most interesting sojourns to this pier. Like most anglers, I had started fishing in an area just outside the breakers and was hoping for a halibut (yes, I was fishing for the halibut). I had two poles and the heavier one was my halibut pole. The light pole was my potpourri pole; it was baited with small hooks and small baits. I had caught nothing on my heavier outfit. I had caught a small kelp rockfish and an under-sized kelp bass on the light pole. Since nothing much seemed to be biting in the areas I was fishing, I decided to move out to the mid-pier area. 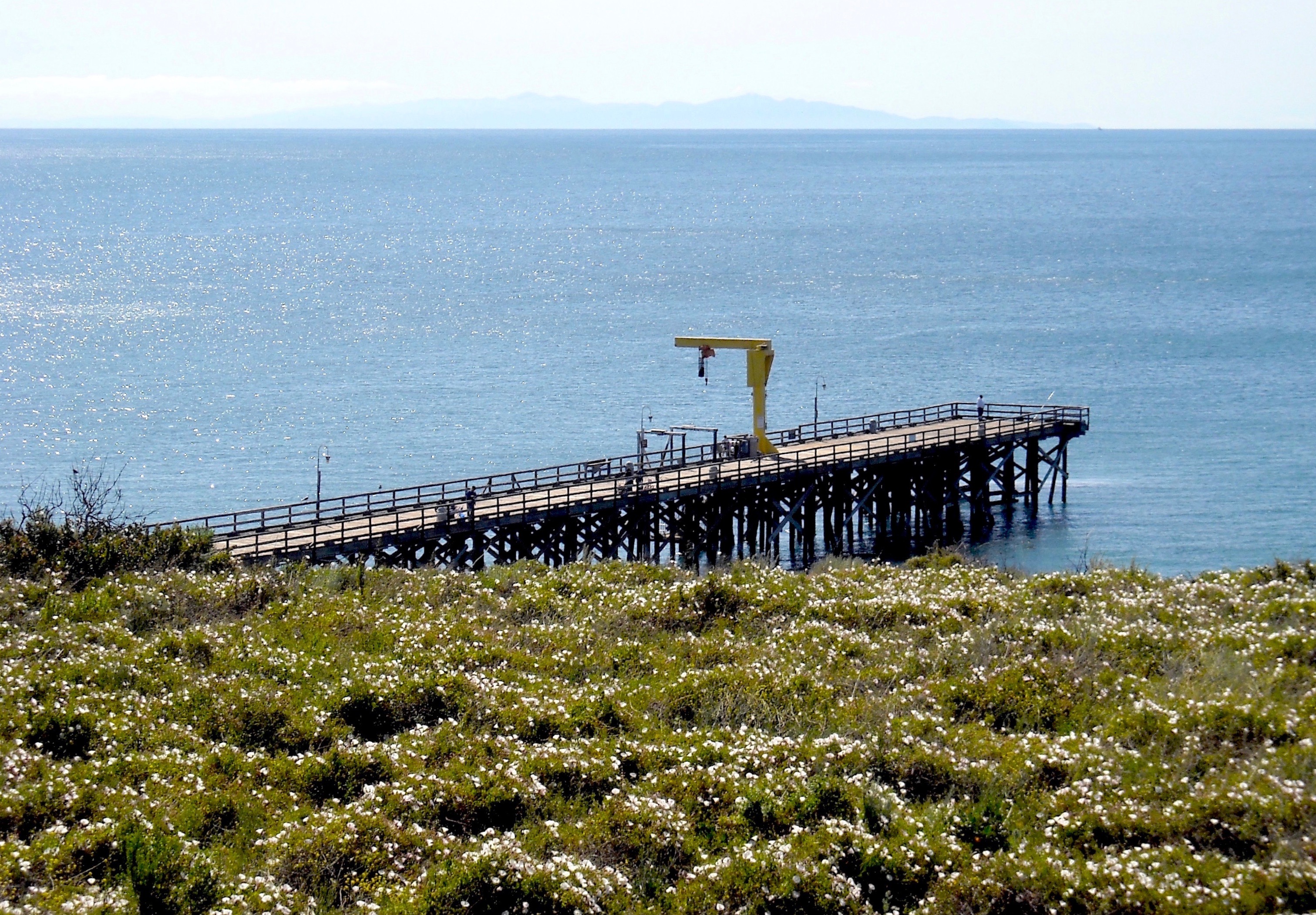 The pier with Santa Rosa Island off in  the distance

It was obvious why no one was fishing this area. Mid-pier to the end of the pier the water was virtually covered with kelp. In fact, it looked like a pier had been plopped down in the middle of a kelp forest. I decided to try my light outfit among the leaves and stalks of the giant kelp and hoped that if I hooked a large fish I would be able to keep it out of the kelp. Soon, I had a hard hit and after a short struggle, I hauled in a giant kelpfish nearly 20 inches long (they grow to 24 inches). It was the only kelpfish I was to catch that trip. Unfortunately, I had used the last of the mussel bait and was unable to get the fish to strike any other bait.

But the fish were there. A small school of tiny pinhead anchovies lazily swam around the kelp; whenever they neared a leaf a kelpfish would dart out and attack the school. Some of the kelpfish were bright red, some purple, some a bright green. Watching closely I could see the fish dart in and out, then retreat quickly to the protection of the kelp. I could also see bright red crabs on the stalks and every so often a larger perch or bass would dash in among the kelpfish. I’m convinced that if I would have had proper bait — fresh mussels, bloodworms, or small crabs, I could have caught a good “mess” of fish. Unfortunately, I had neither proper bait nor the time to get any, I had to move on. 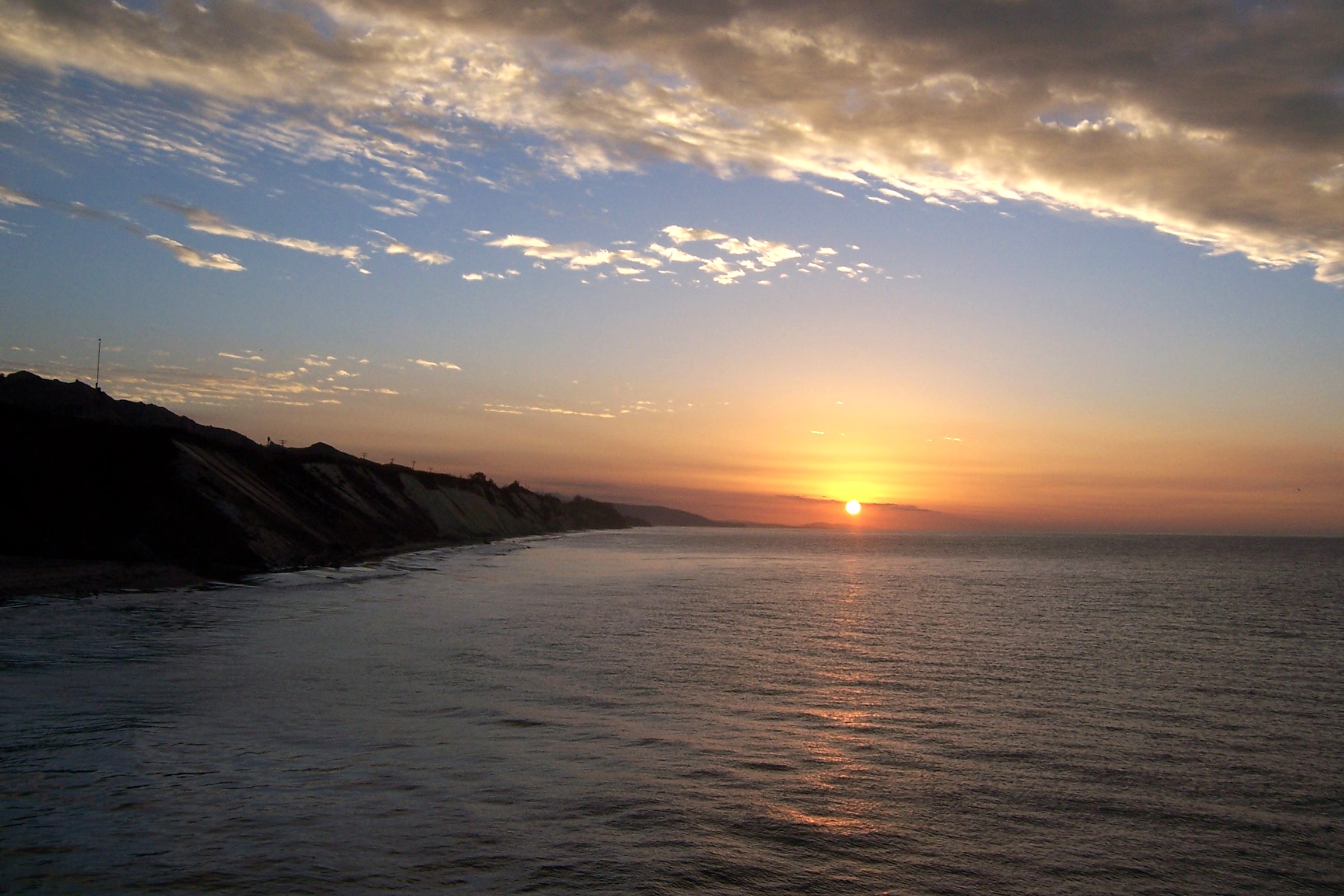 Dawn and the view looking down the coast

Environment.  The pier is the last of the warm-water southern California piers and is part of the 2,775-acre Gaviota State Park, a park that stretches along five miles of California’s shoreline and receives on average 55,000 visitors per year (so it’s not too crowded). The park is roughly 45 minutes west of Santa Barbara, and presents most days a glimpse of the nearby Channel Islands off to the south—San Miguel (the closest), Santa Rosa, and sometimes Santa Cruz. A short distance west of the park HY 101 turns inland as you pass through the Gaviota Tunnel and you lose your seaside view until you reach Pismo Beach. The tunnel by the way is perhaps most famous from the scene in the movie The Graduate when Benjamin Braddock (Dustin Hoffman) drives his beautiful new Alfa Romeo through the mist and into the Gaviota Tunnel.

Approximately 15 miles away sits Point Conception (called by early day sailors the Cape Horn of the Pacific due to the treacherous northwest gales that sweep around the headland). It is the traditional dividing line between the subtropical warm-water south and the temperate cold-water north. The “Point” is also where the coastline begins a north-south orientation instead of the east-west direction common for much of southern California’s coastal areas. The Gaviota Pier itself faces due south. 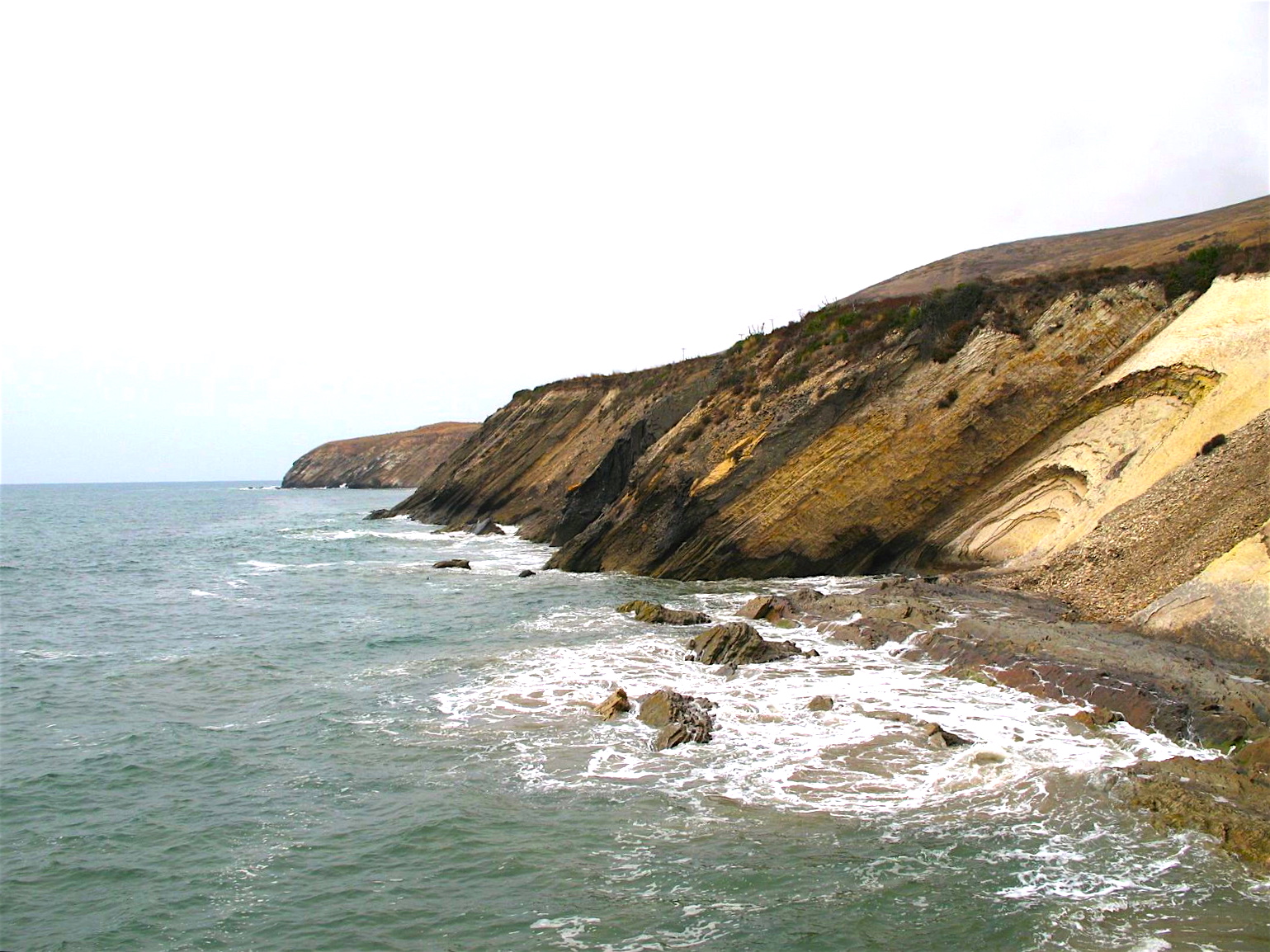 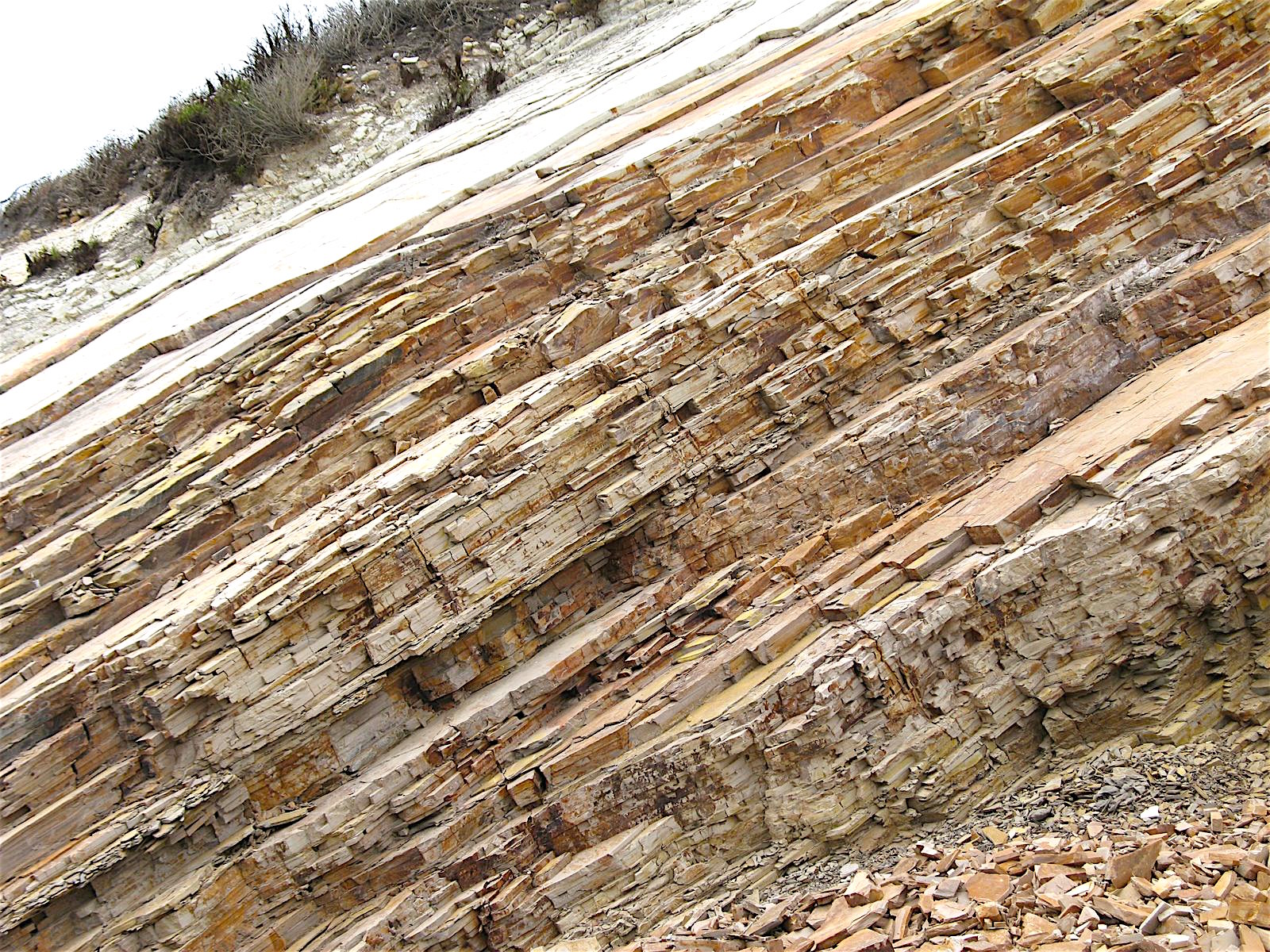 Looking up the coast

The shoreline is edged on the west by Monterey shale that emerges out of the ocean’s floor to form interesting patterns both on the beach itself and the cliffs above. Photographers (and anglers) are presented some beautiful colors and great photo ops during the late afternoon and sunset hours. Instead of the “white cliffs” of Dover you’re presented the “golden cliffs” of Gaviota. 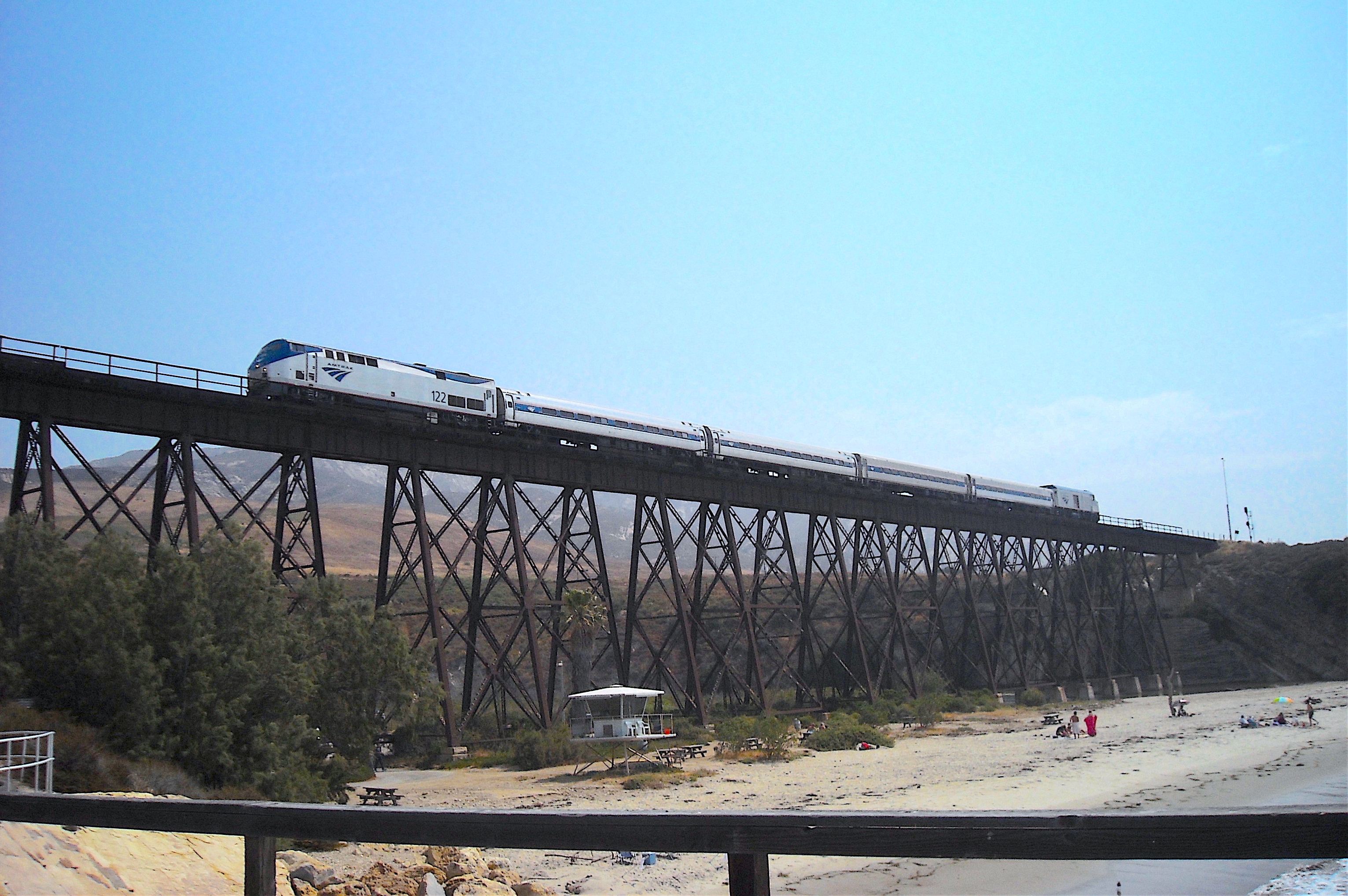 To the east of the pier is the sandy-beach surf area framed by the high Southern Pacific railroad trestle (aka the “ghost bridge”). The trestle bridges Cañada de la Gaviota and Gaviota Creek, a seemingly unassuming creek that is usually dry by summer. However, as witnessed by the devastation caused to the park in 1998, the creek can play a Jekyll and Hyde role during winter storms.

As for the ocean environment, most of the bottom around the pier is sand with few rocks to grab onto sinkers—or to attract fish. Inshore the water is shallow but at the end of the pier the depth is approximately 20 feet deep. Pilings are usually covered by mussels and the creatures associated with piling environments. Some years will see a dense growth of kelp surrounding much of the pier; other years may see little or no kelp.

The pier has a listed length of 529 feet; width is 21 feet and the deck is 18 feet above the water. There are two annoyances at the pier, both small and too plentiful. The first is yellow jackets and this is one of the worst piers for the critters. If you are cutting bait on the railings the hovering pests will visit you. Ditto if you have food. Keep bait, food, and fish you catch in a cooler to avoid the insects. The second nuisance is shinerperch that almost always seem to saturate the waters of the pier from mid-pier to the end. No matter the fishing, good or bad, the shinerperch will be present and eager to grab any bait that is small enough for them to mouth. Problem is they will grab the baits intended for larger perch much like senorita will do at some piers. You can’t avoid them without using large hooks but you need small hooks for the perch. Their presence should attract larger fish and that seems their only redeeming virtue. 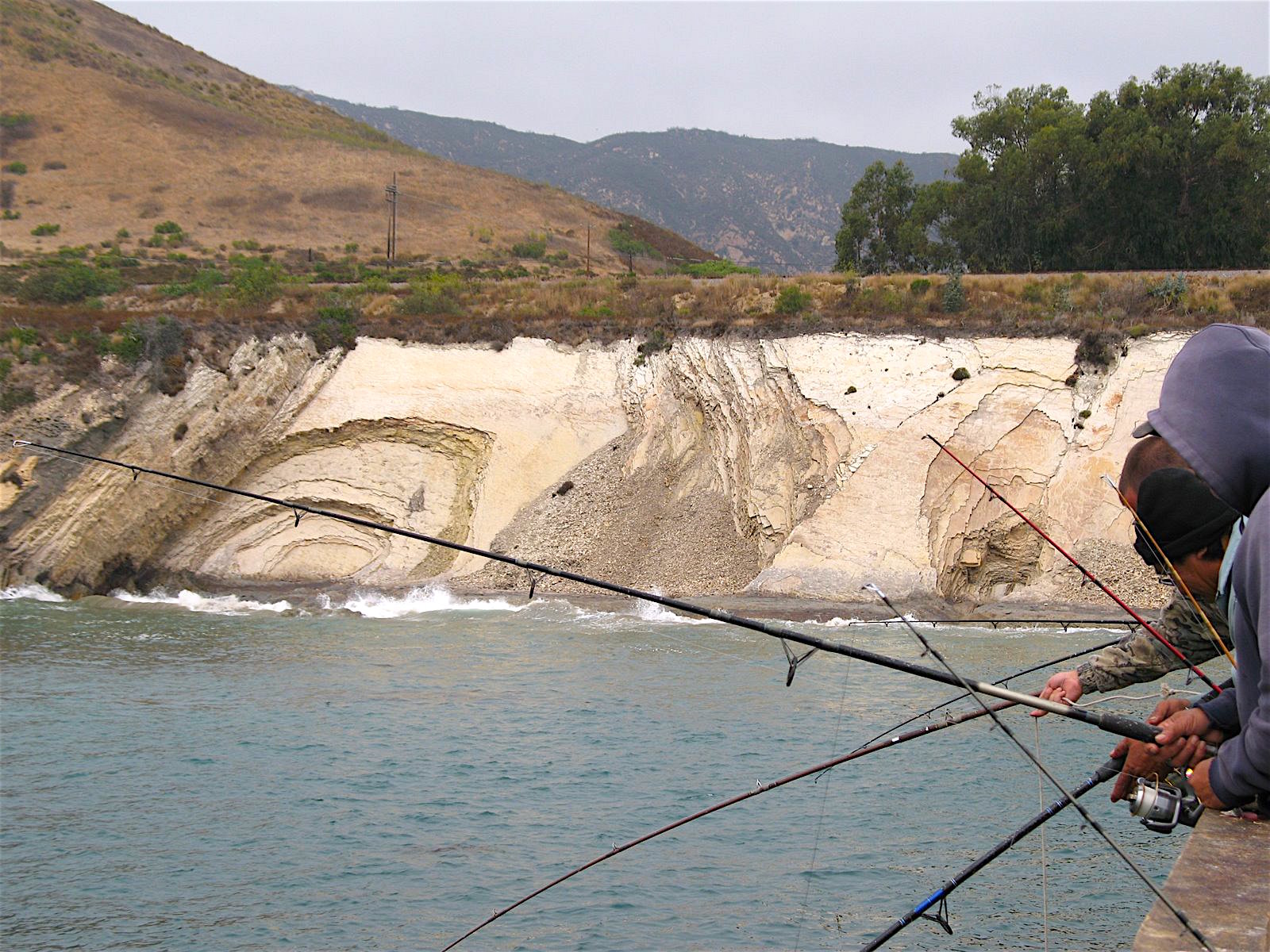 Fish. The inshore, surf area is the home of and produces good catches of surfperch (several varieties), rays, guitarfish and sharks. Just outside the surf area to mid-pier, where water is free of kelp, is the spot most often fished for halibut and quite a few are landed every year (although more should be landed). Mid-pier to the end, especially around kelp and the pilings, anglers will land several varieties of perch, small rockfish, bass (mainly kelp bass), an occasional sculpin (scorpionfish), as well as the aforementioned sharks and rays. The far end yields more of the deeper-water pelagic species: Pacific mackerel and jack mackerel every year, sardines and Pacific bonito some years.

The deeper water is also the main home of sharks and rays, large and small, with a variety being caught. The specialty is thresher sharks and the pier may be the best in the state for threshers—Alopias vulpinus—the fox of the sea. Although threshers typically cruise from almost the breakers out to the outer edge of kelp beds, here the most common hookup spots are out toward the end and some days will see multiple hookups of the large critters.

Crustaceans. Unlike piers to the north, and a few SoCal piers to the south, the pier has never been noted for crabs or lobsters. The one exception is that the pier does see some good-sized spider crabs (aka sheep crabs) taken by anglers. Although not as productive as Stearns Wharf in Santa Barbara, I’ve gotten quite a few reports of the big gnarly, ugly-looking crabs being landed here. On the other hand, I don’t believe I’ve ever heard of a lobster being taken from the pier even though Gaviota was an area where commercial lobster fishermen used to unload their catch. Given that fact, some should be in the area. 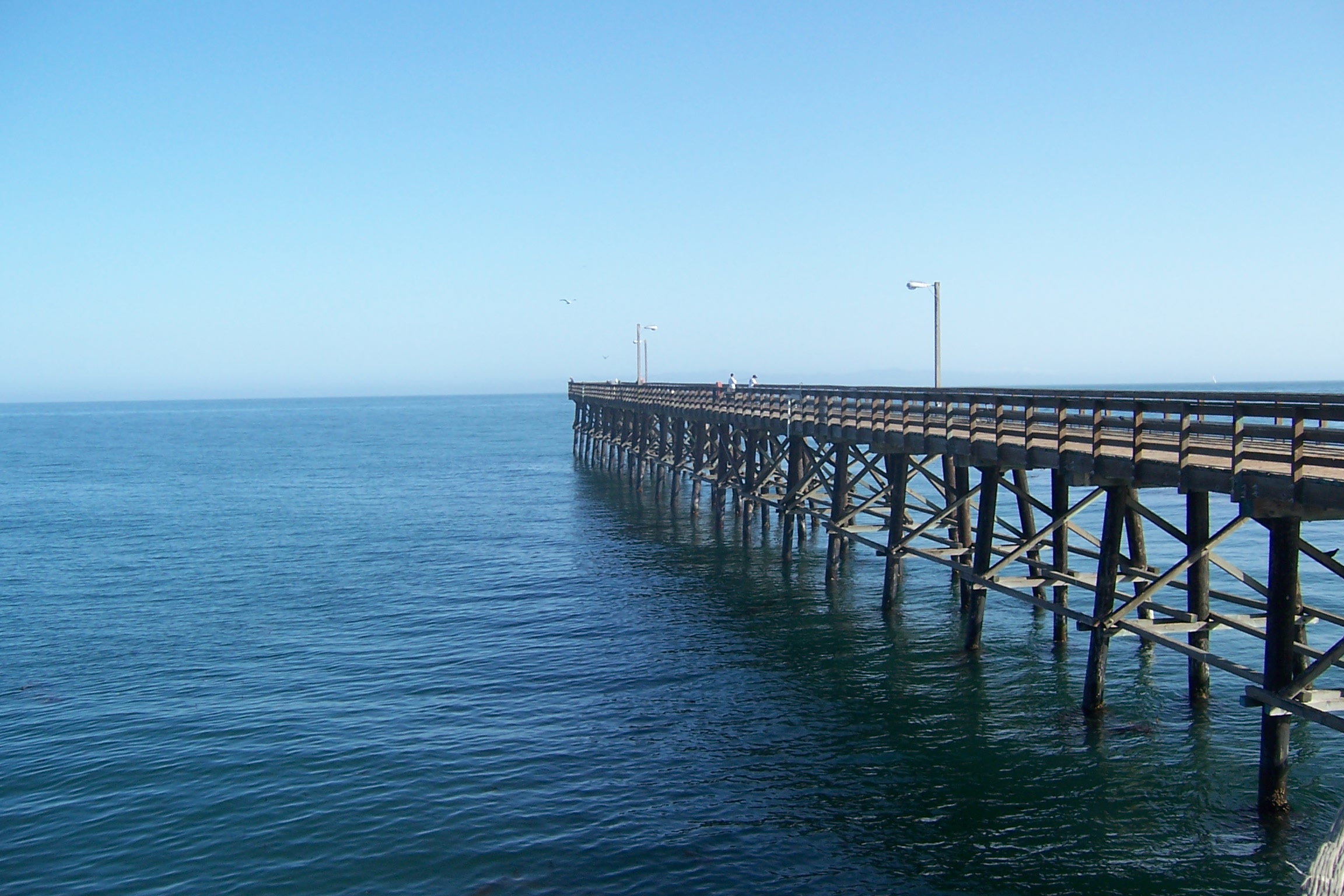 Fishing Tips. Inshore, the surf area will produce barred surfperch for anglers using sand crabs, pile worms or bloodworms, fresh mussels or clams. The same area and baits will also yield some black seaperch, rubberlip seaperch, kelp rockfish, grass rockfish, brown rockfish, and a few kelp bass when and where kelp is present. Although the bottom is sandy, the kelp works to attract rock-frequenting species. The same fish, as well as pileperch, can be caught around the pilings themselves by using a high/low leader and size 6 or 4 hooks baited with sea worms or mussel. Bait rigs will also work here, but the most common fish will be shinerperch, kelp seaperch, small walleye surfperch, and jacksmelt.

Just outside the surf area is the spot for halibut. Although most anglers will use a whole or cut anchovy on the bottom, live bait (small smelt, sardine, tom cod or shinerperch) is often more productive. Another technique is to troll your bait along the bottom if the pier isn’t too crowded. Simply keep your line taut and walk along the edge of the pier. The halibut like to lie in the near the pier, especially in the depressions between the pilings. Be careful not to tangle your line in the pilings and be ever so alert for the soft mouthing of a halibut. Generally they like to take the bait and move it around a bit in their mouth before they really strike. Be prepared! The same technique can be used quite effectively with artificial lures, especially swim baits like Big Hammers. 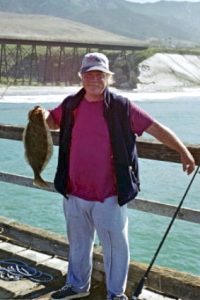 A halibut caught by my friend Glen (Songslinger) one morning — the rocks behind his shoulder have always looked to me like some sort of misshapen, skull-like head

Further out on the pier, areas in the water are sometimes covered with kelp. When this happens, it takes care and patience to fish the spots between the fronds of kelp. Use a small size 6-8 hook, mussels or seaworms for bait, and fish right around the kelp. Seaperch, opaleye, halfmoon, and more exotic species like kelpfish and senorita will often bite. Calico bass (kelp bass) are also a possibility and an 11-pound calico was reportedly caught near the crane by an angler fishing at night in July of ’04. Don’t know if the weight was accurate but that’s a nice-sized bass!

The far end will often yield pelagics—Pacific mackerel, jack mackerel, jacksmelt and sardines. The most common rig for these is a multi-hook bait rig like a Lucky Lura or Sabiki. Myself? I prefer just throwing a couple of size 4-2 hooks onto a line high/low style with a one-ounce shiny torpedo sinker at the bottom. It catches fish and why risk losing an expensive bait rig if the mackerel begin one of their patented “mac attacks.” Bonito will be caught some years and when they show up break out feathers with Cast-A-Bubbles, golf-ball rigs, or spoons and lures like MegaBaits. Kelp bass can also be taken on lures and surprisingly some years will see quite a few lizardfish hitting the artificials.

I have experienced some absolutely unbelievable catches of mackerel off the far right corner (generally early in the morning) but almost anywhere at the end can be good when the macs are running (as well as jack mackerel, jacksmelt and sardines).

Wintertime, while generally offering up slower fishing than during the summer and fall, does offer up an occasional lingcod—or so I’ve been told. Since lings move into shallow waters in the late fall to winter months to spawn it makes sense that some would show at the pier. Cabezon too may make an appearance. Use squid or a small live fish for the lings, crabs or fresh mussels for the cabezon.