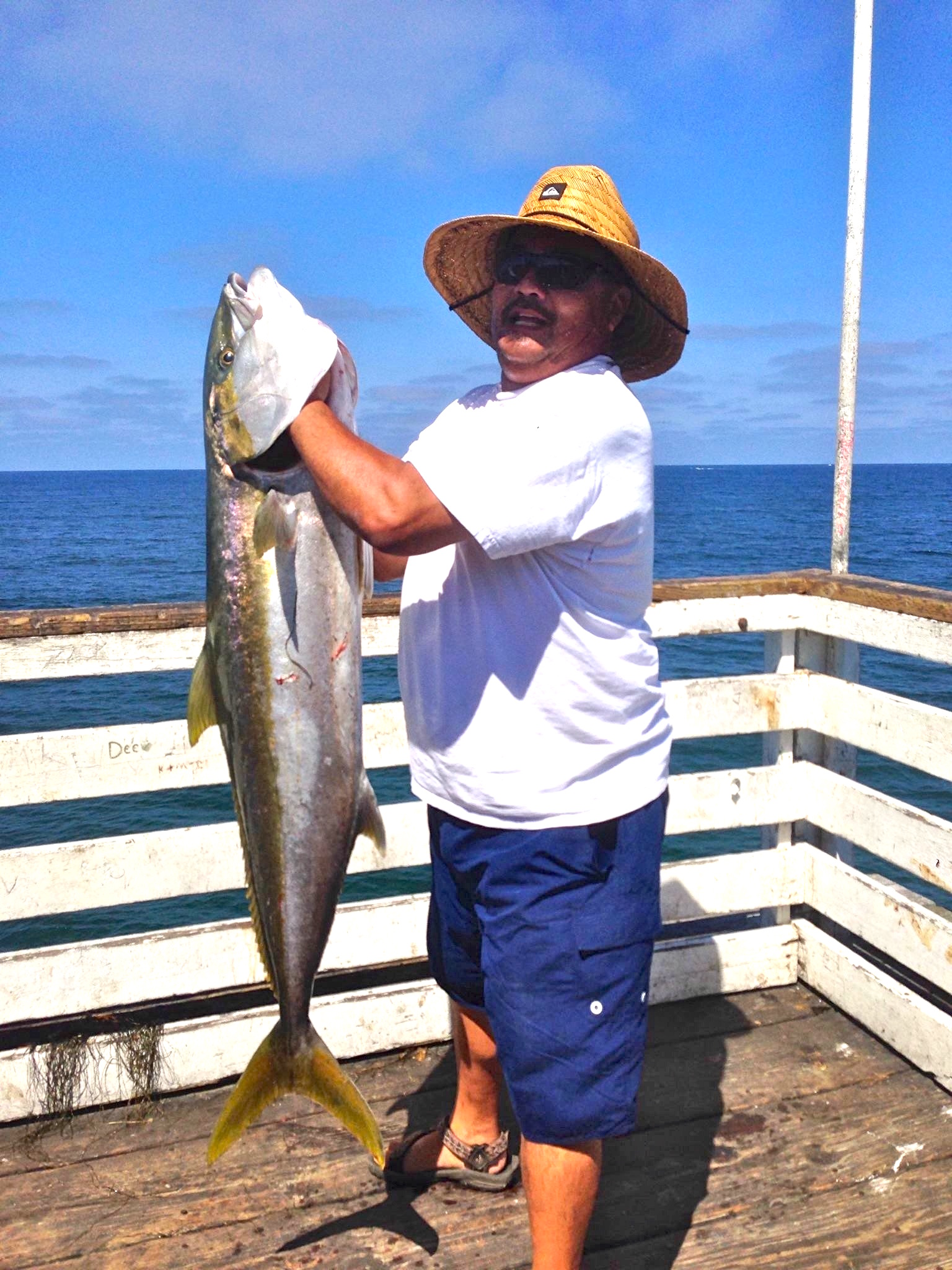 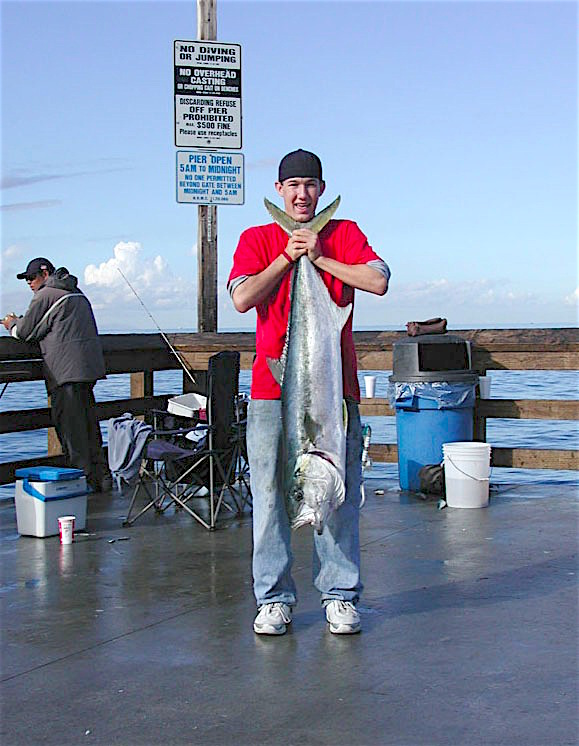 35-pound yellowtail taken from the Balboa Pier in 2003

Identification: Typical jack shape with metallic blue to green above, a brassy horizontal band along the sides from eye to tail; silvery below; some fish are olive-brown to brown. Fins and tail are yellowish 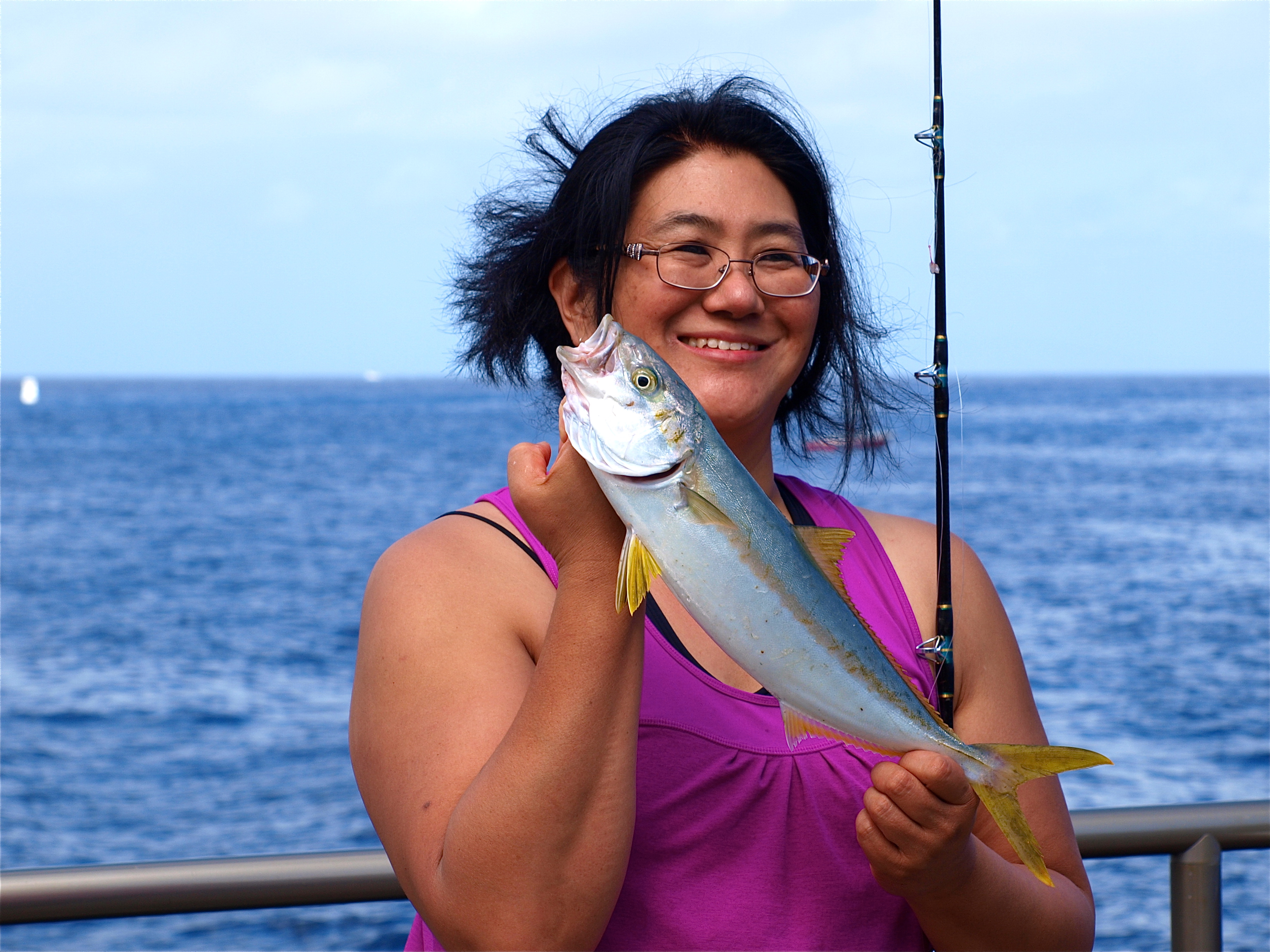 Small, firecracker-size yellowtail caught by Rita at the Cabrillo Mole in 2015

Size: To 80 pounds and over 5 feet long. Most caught from piers are less than 10 pounds. The California record fish weighed 63 lb 1 oz and was caught at Santa Barbara Island in 2000. The diving record is for a 65 Lbs 0 oz fish taken at the Cortez Bank, San Diego Co. in 1988. 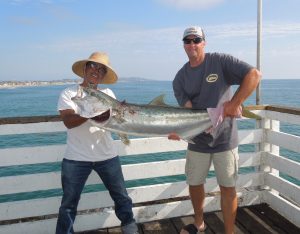 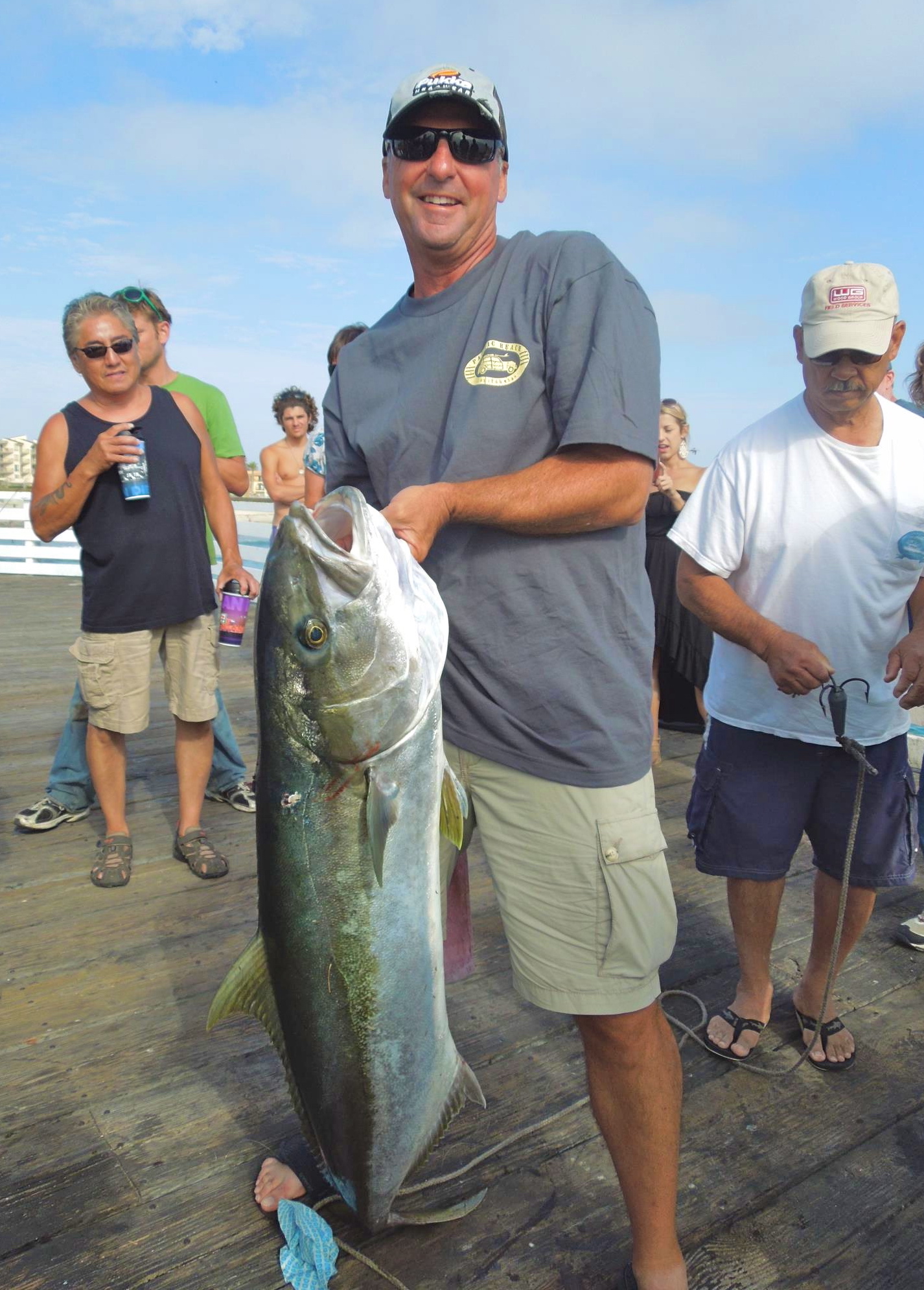 Range: Circumglobal in warmer waters and some temperate waters. In the eastern Pacific from Malpelo Island (300 miles west of Colombia), the Galápagos Islands, central Mexico, the Gulf of California, the Pacific coast of Baja California, and California north to northern British Columbia. Unverified reports from Gulf of Alaska off Kodiak Island and Cordova. Most common south of Point Conception.

Habitat: Epipelagic (surface down to about 200 feet deep); usually found in surface waters around offshore islands, rocky reefs, kelp beds and floating kelp mats. Recorded to a depth of 1, 023 feet. Primarily feeds on squid and fish. 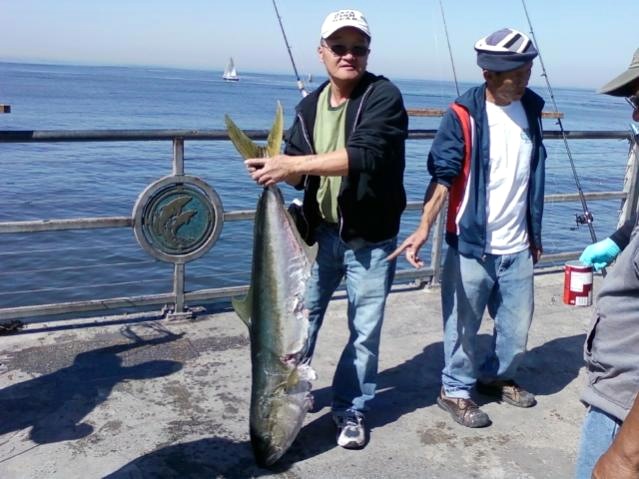 Piers: Most southern California piers located near reefs or kelp will see a few yellowtail caught during the year. However, they are always a bonus fish and rarely caught in large numbers off of piers. In addition most of the yellows taken are the small firecracker-size fish. Best bets: Ocean Beach Pier, Oceanside Pier, San Clemente Pier, Redondo Beach Pier, and the Hermosa Beach Pier. Crystal Pier in San Diego is by far the best pier in the state for yellowtail and many fish in the 30-40+ pound range have been taken. 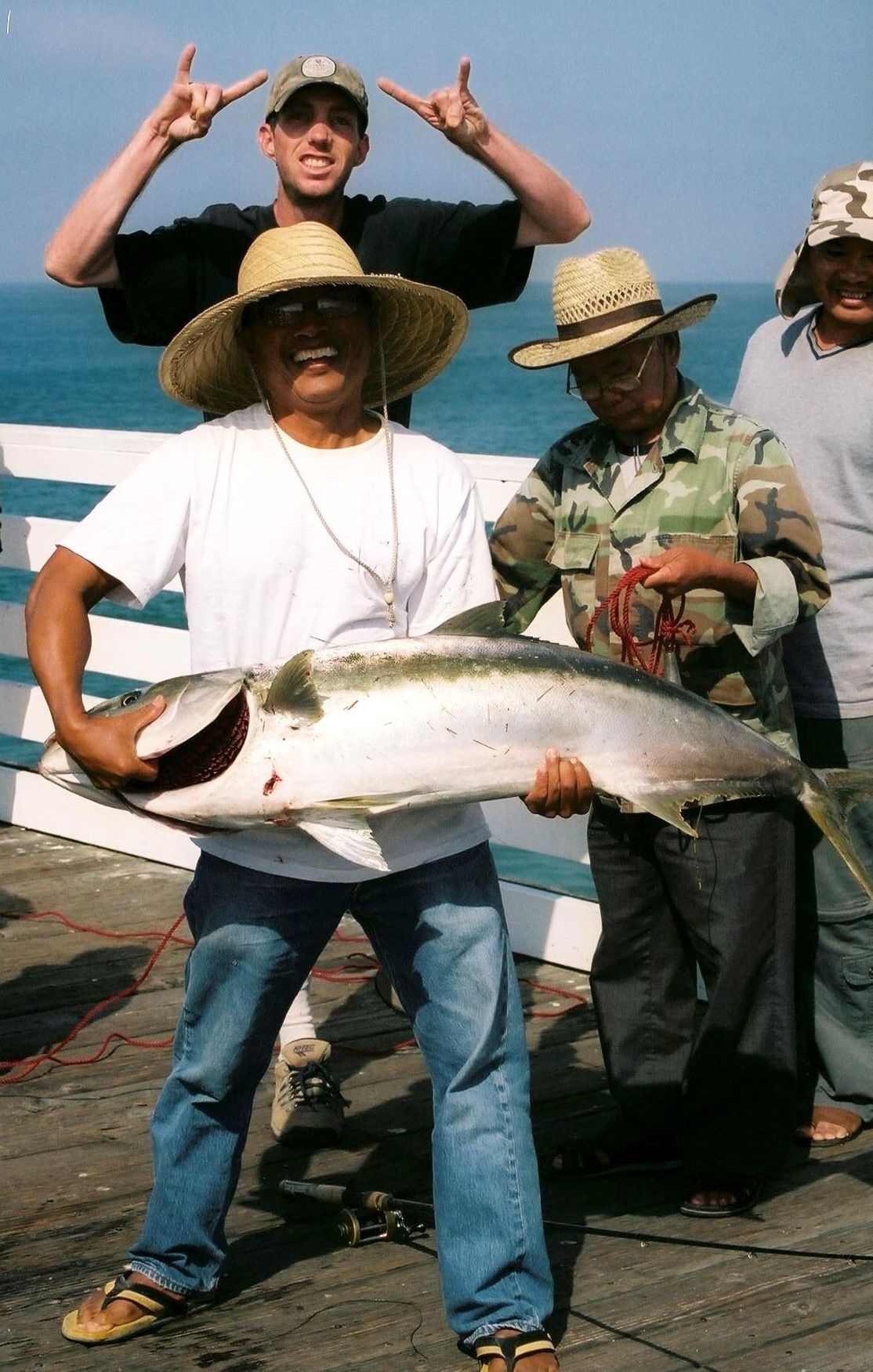 Yellowtail reported at 55 pounds from the Crystal Pier in 2006 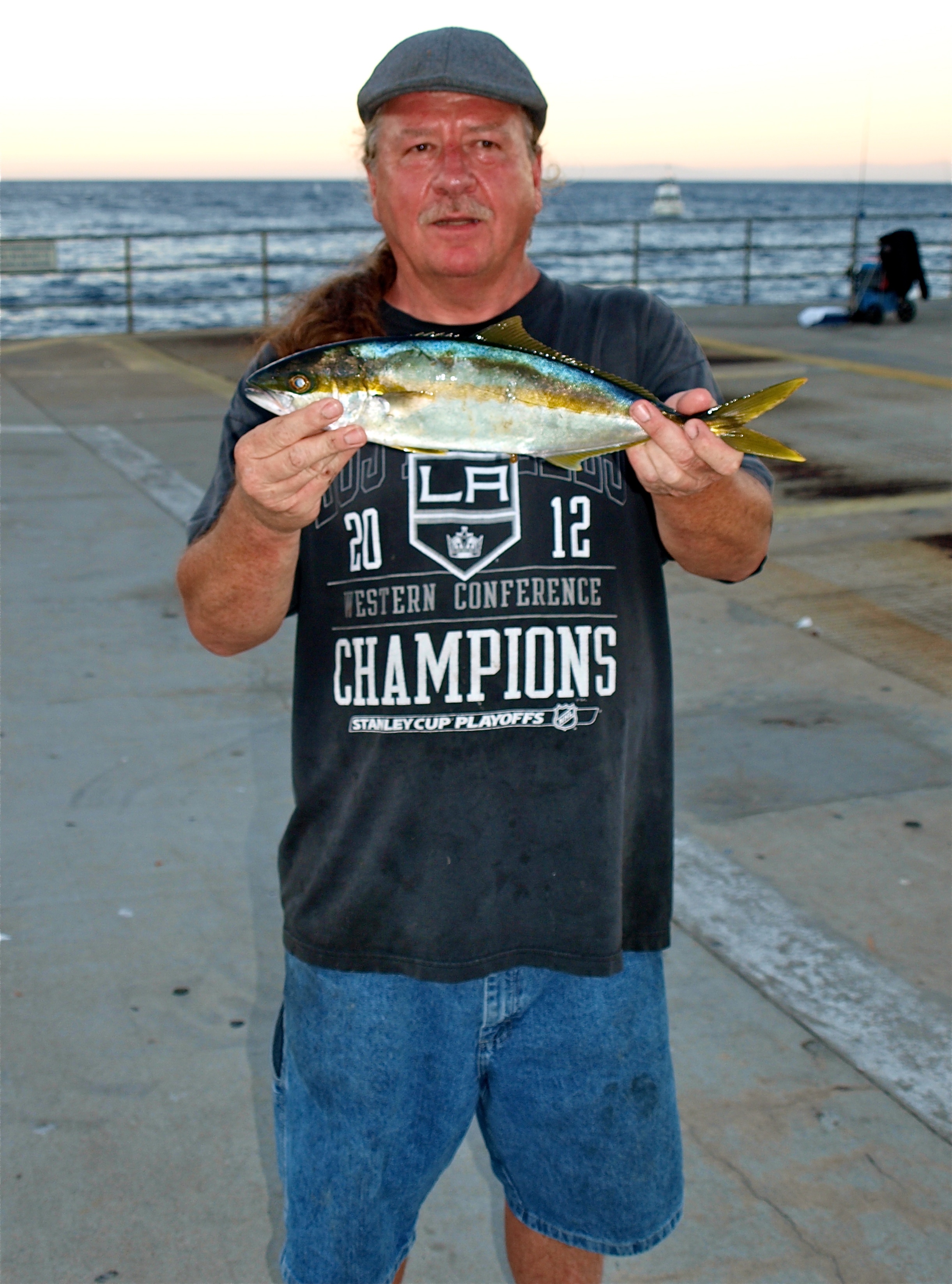 Boats: One of the most prized species for boaters in southern California. The traditional “yellowtail grounds” have been at Catalina and the Coronado Islands. 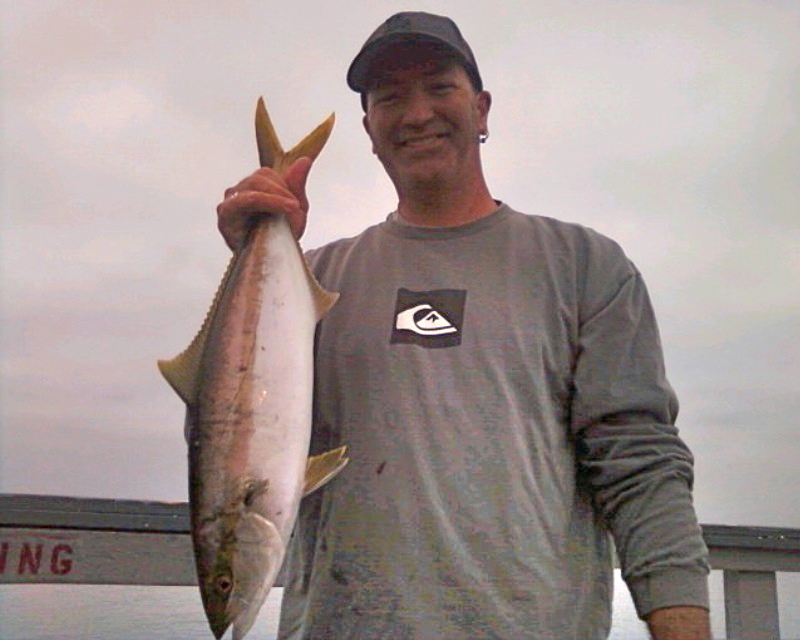 Yellowtail from the Redondo Sportfishing Pier in 2011

Bait and Tackle: If an angler wants to try for yellowtail he should have heavy enough tackle to insure a fair chance of landing the fish. Yellowtail like to head for rocks or kelp as soon as they’re hooked so line should test 20-30 pounds, hooks should be small (size 6 or 4) but strong, and the angler must make sure the fish is played out before it nears the pier and the pilings. Although lures work well on boats, almost all of the pier-caught yellowtail are taken on live bait—especially on small jack mackerel, Pacific mackerel or Pacific sardines. 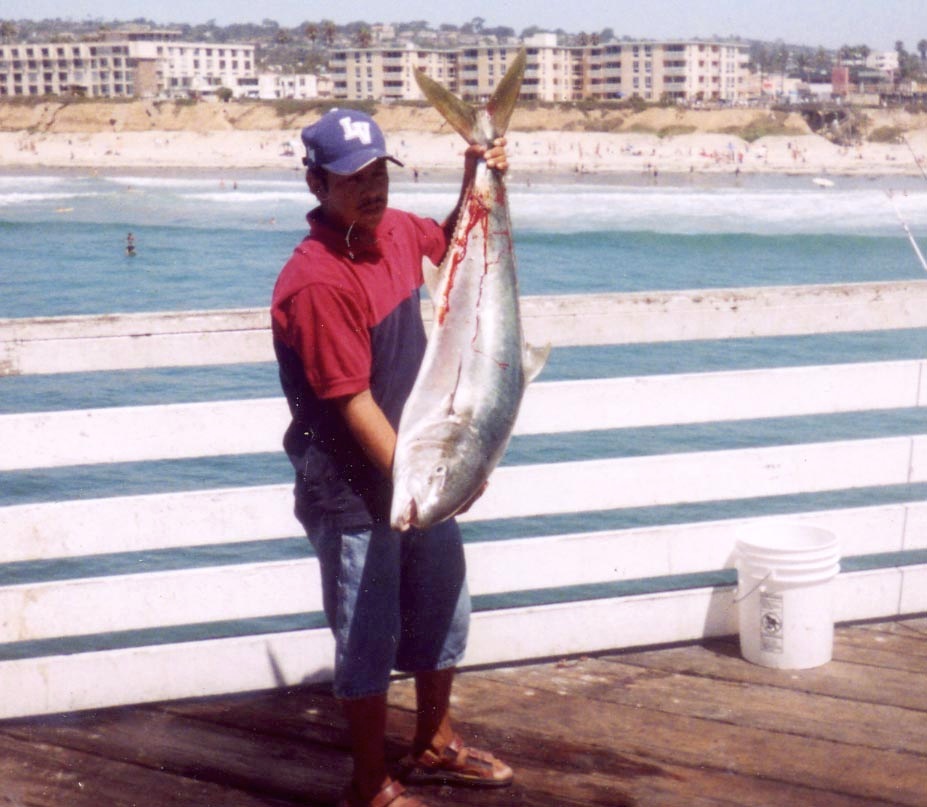 Food Value: A good eating fish with mild flavor, small flakes and firm texture. The flesh is off white and and moderate in fat content. The flesh can be cooked in any manner but is probably most commonly broiled or bar-b-cued. A favored Japanese dish, and it’s very good, is Hamachi (yellowtail) Teriyaki. 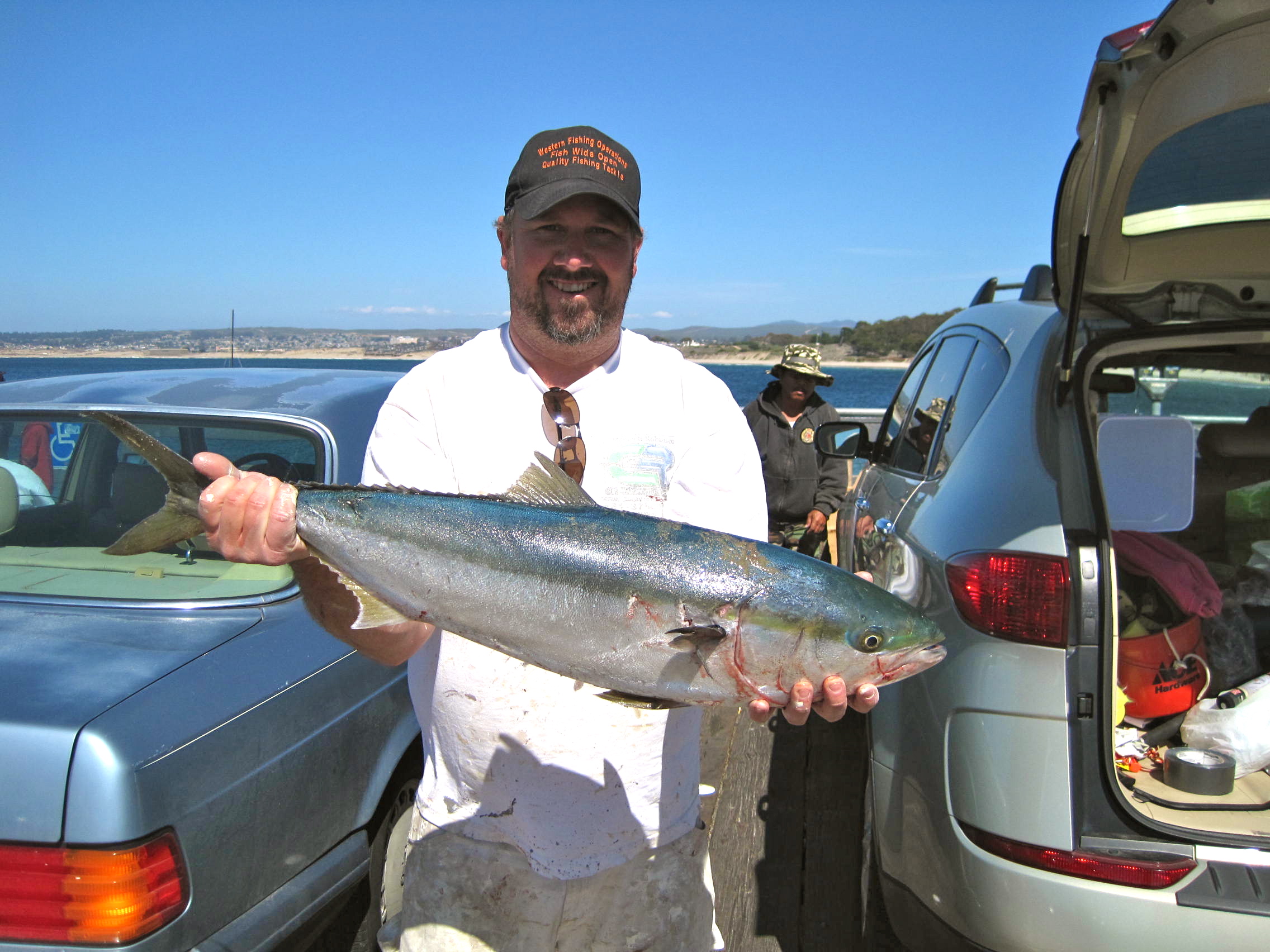 Yellowtail captured at the Monterey Wharf #2 in 2012

Comments: One of the favorite southern California sport fish but much more common out in deeper water. 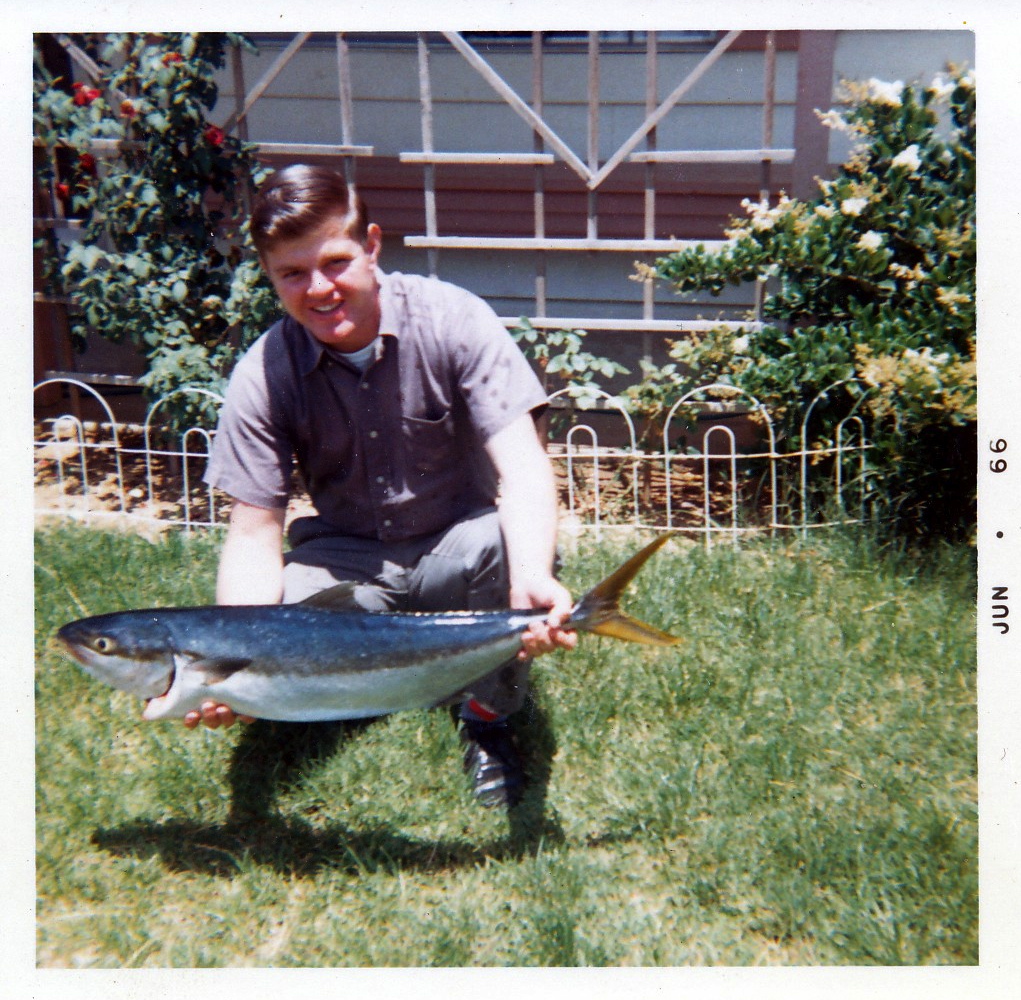 My first yellowtail, many, many years ago 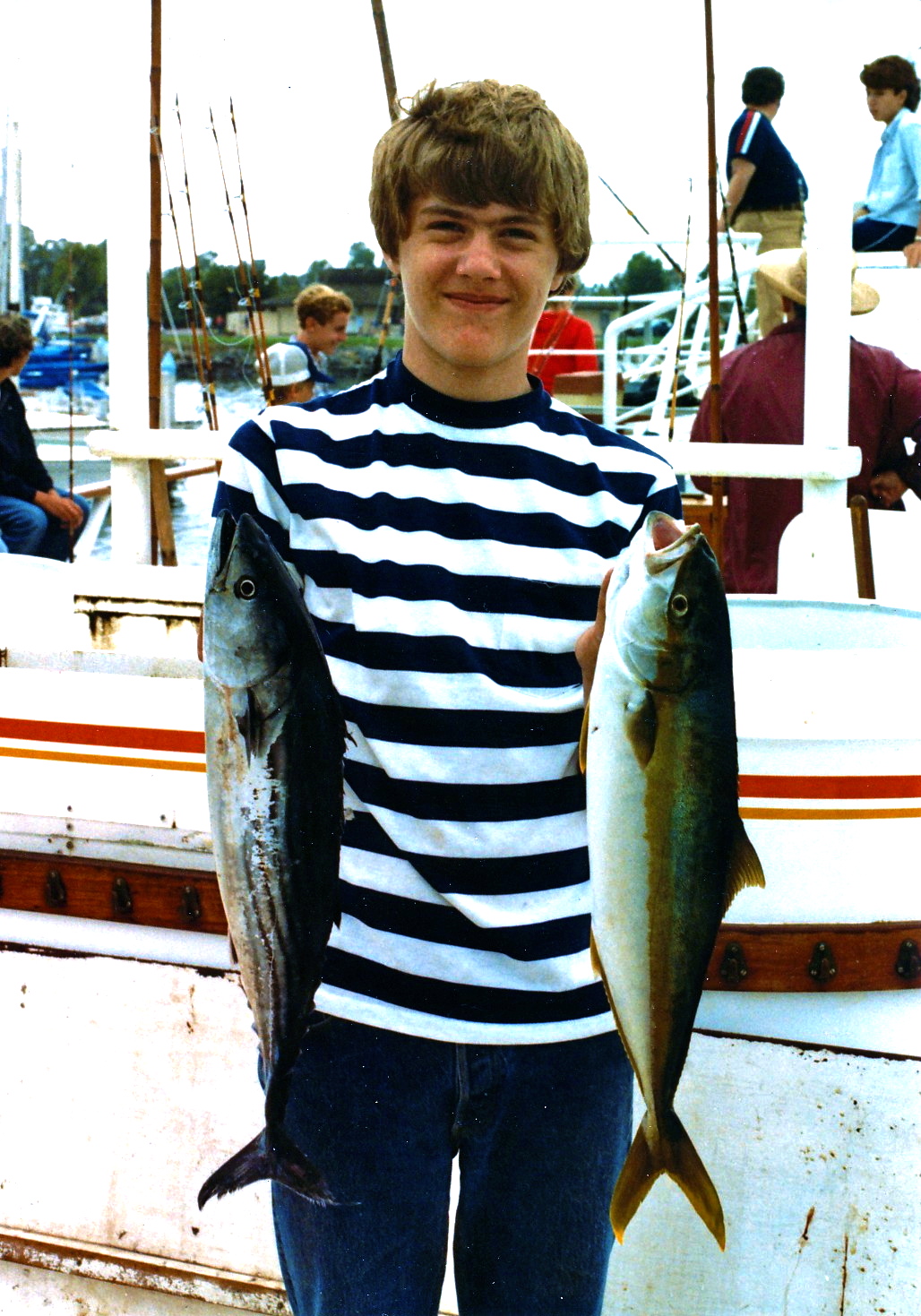 My son Mike’s first yellowtail along with a bonito — San Diego, 1983 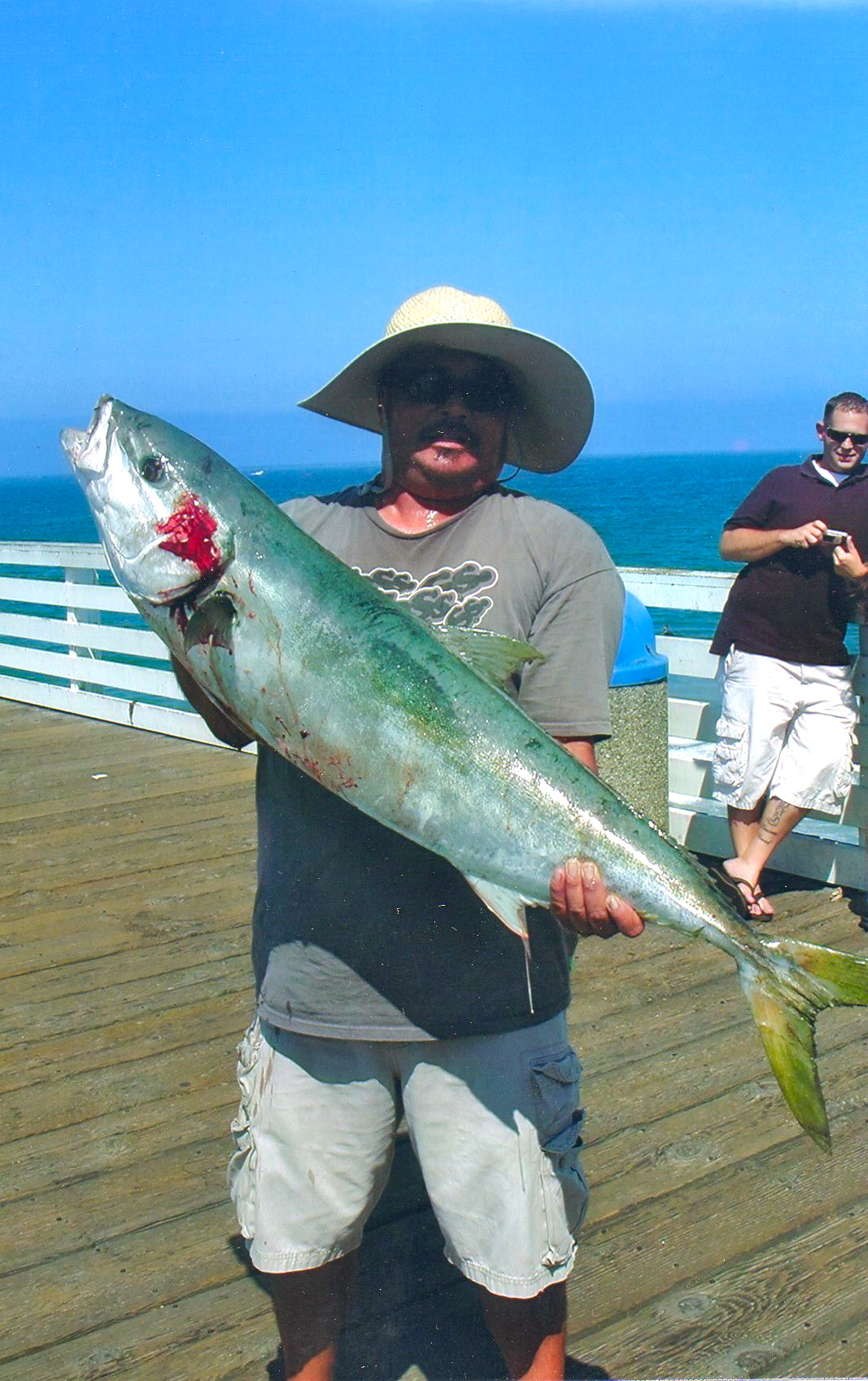 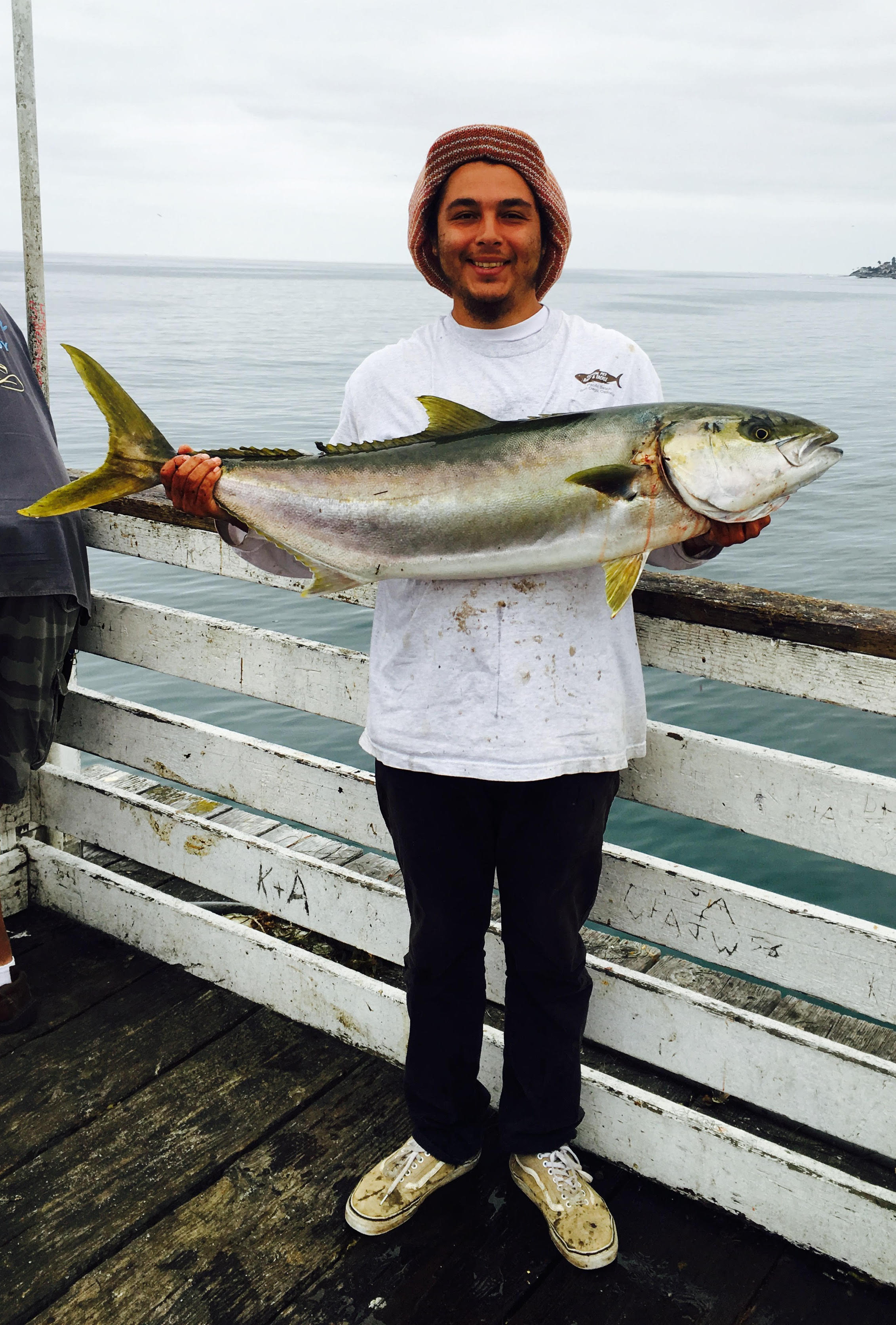 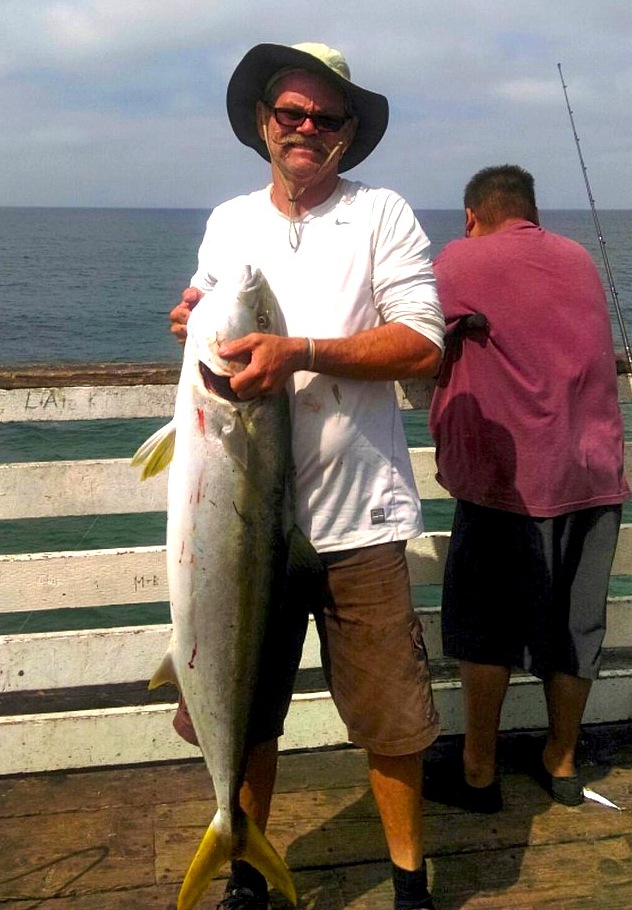 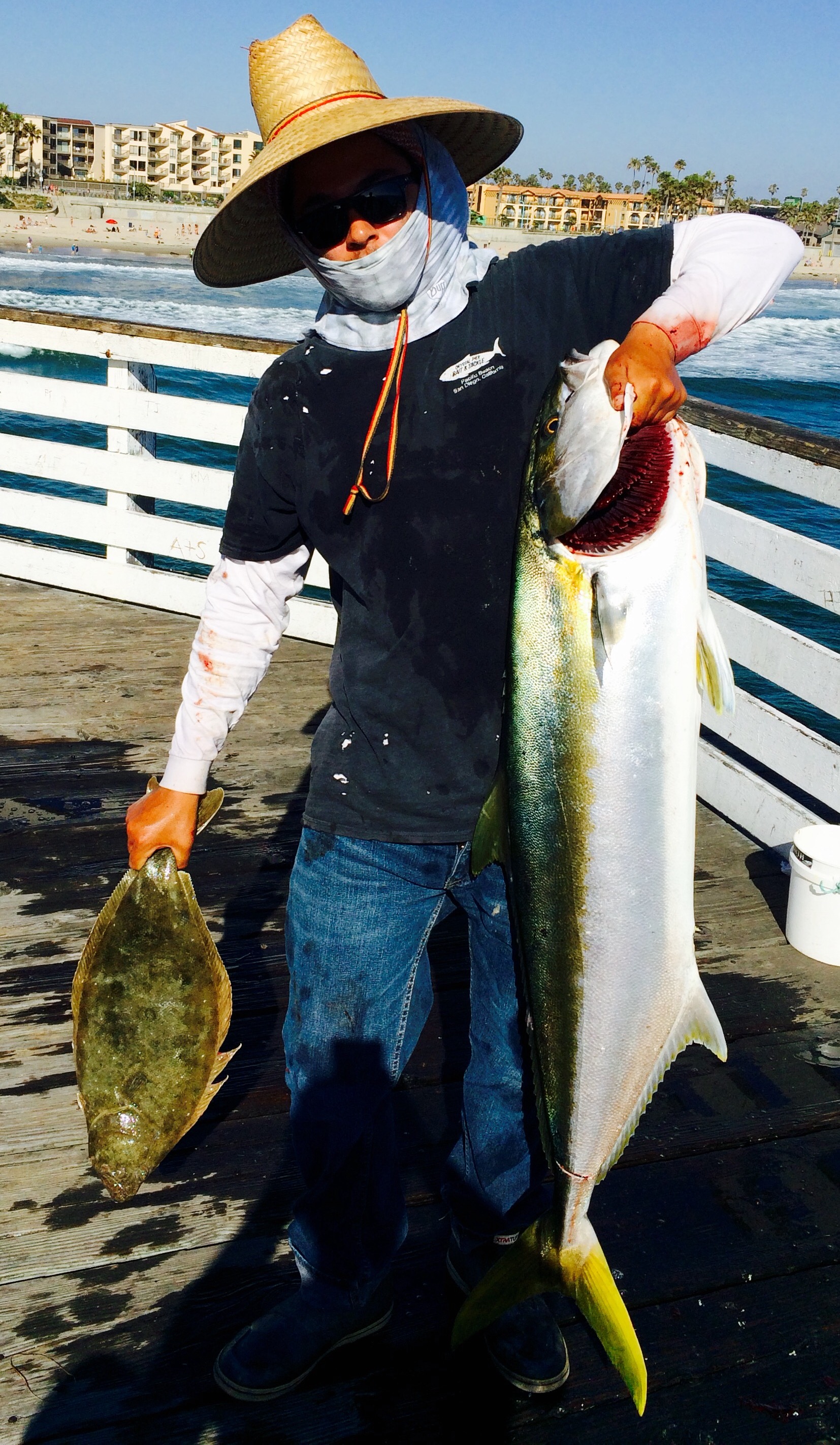 Yellowtail reported at 40 pounds. Taken by Angel Hernandez at the Crystal Pier in 2017

A list of large “unofficial” yellowtail caught from piers. Unlike most species, the majority of the largest, pier-caught yellowtail have been landed in the past twenty years. While literally thousands of yellowtail were caught in the early years of the piers, mostly at the Redondo Beach wharves/piers or the McFadden Wharf in Newport Beach, most were small fish under 10-12 pounds in size. The last few years has seen the records smashed and primarily at one pier—Crystal Pier in San Diego.