Identification: An oval-shaped, right-eyed member of the flatfish family. C-O sole are most easily identified by a dark spot and crescent-shaped ring on the caudal fin (like an O inside a C). High dorsal and anal fins with first 5-6 rays in dorsal fin on the blind side; eyes large and protruding, separated by a high, bony ridge; a small mouth and thick lips. Coloring is generally brown to almost black with a spot about the size of an eye on the lateral line. However, Milton Love in his piscatorial Bible, Certainly More Than You Want to Know About The Fishes of the Pacific Coast, says: “Goodness, but c-o soles can come in a vast array of colors and patterns. Pink, yellow, cream, white, and brown are the most common, although you often see them almost solid white, and an occasional one has a blue ring or two. If you see a turbot that is brightly, one might say garishly marked, it is likely a c-o.”

Size: To 14 inches; most caught off piers are less than 12 inches. 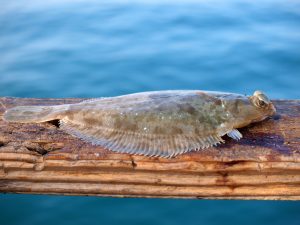 Habitat: Found from the surf zone down to a recorded depth of 1,146 feet. Typically found on sandy bottoms but sometimes will be found around rocks and algae. Common to shallow water areas in bays. C-O’s typically feed on sediment dwellers such as polychaete worms and small crustaceans (crabs, shrimps, clams, brittle stars) but they will also gobble up small fish when available.

Boats: Occasionally taken by boaters fishing for sanddabs and other flatfish.

Bait and Tackle: C-O sole are small flatfish, which prefer a small hook and live bait. Bloodworm, lugworms, and small ghost shrimp are the best baits. However, almost any bait may attract a bite including cut anchovy, strips of squid, and pieces of shrimp or clam. Hooks should not be larger than size 4.

Food Value: Excellent. The flesh is white colored, mild flavored, soft in texture, and low in fat content. It is suitable for any method of cooking but due to size often best simply pan-fried. 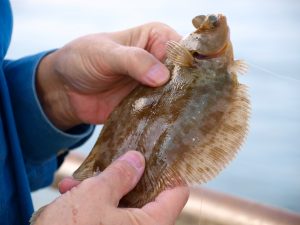 A C-O sole from the Redondo Beach Pier.