Cusk-Eel from the Newport Pier

Alternate Names: Eel or California cusk-eel. An old name—pearl fish. In Mexico they’re called congriperlass or congriperla canastera, while in far off Denmark (where they could only go as tourists, they are called skæflettet slangekvabbe).

Size: To 10 3/4 inches although most seen at piers are less than 8 inches. 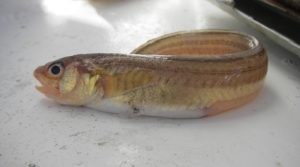 Habitat: A bethnic (bottom dwelling) species typically found in nearshore, shallow-water areas, both sandy and muddy, as well as some estuarine areas. Recorded to a depth of about 699 feet.

Bait and Tackle: Cusk-eels are an incidental catch by anglers fishing on the bottom for other species. An angler has to have some luck to catch one of these fish. Generally during the day they hide in caves or crevices so most are caught at night or on overcast days. In addition, they typically will bury themselves in the sand and strike out at a passing meal. Their typical foods are small crustaceans, small clams, polychaete worms, and other invertebrates. Thus a small hook baited with worms, pieces of shrimp, or small pieces of clams will offer the best chance for these small fish.

Food Value: I’m not sure of their food value. Most I have seen were really too small to offer up much of a meal. The only two I have caught now reside in bottles of formaldehyde.  However, the kingclip, a cusk-eel that reaches five feet in length in southern and eastern Pacific waters is considered a commercial species and its flesh is considered excellent.

Comments: I caught my first cusk-eel when I was a neophyte angler fishing from the Newport Pier in the fall of 1962. Since I already fancied myself an amateur ichthyologist, I was determined to identify what this strange fish was, especially since no one I asked had a clue as to its identity. After an exhaustive search through antiquated reference books, I identified the fish. According to Marine Fishes of Southern California by Percy Spencer Barnhart (University of California Press, 1936) it was a Southern California Cusk Eel (Otophidium Scrippsi) [Common and scientific names have since changed]. Next, the fish was pickled in formaldehyde for my biology class at Newport Harbor High School. It may, for all I know, still be there. 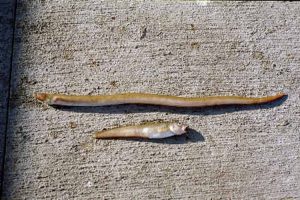 In December of 2002, I caught another of these little cusk-eels out at the end of the Newport Pier and it too was destined for preservation. However, it resides with the Fish and Wildlife Department and is used by them to train game wardens in fish identification. By the way, the fish now has a new common name—basketweave cusk-eel.

This fish has a closely related relative called the spotted cusk-eel (Chilara taylori). It is similar in shape to the basketweave cusk-eel but covered with dark blotches on its upper body. It is slightly larger, ranges all the way to Oregon, and is actually more common in California than the basketweave cusk-eel. But it is also more of a deep-water fish and encountered less often at piers.