Location, location, location, the most important ingredient of any real estate transaction, also helps define why this tiny pier is popular with anglers. The pier is located on the northern tip of Bay Farm Island (just north of the Oakland International Airport) and it sits in the San Leandro Channel, the main channel of water connecting San Francisco Bay with San Leandro Bay. The channel is a fairly fish-rich area of water and provides better fishing than in many nearby areas. 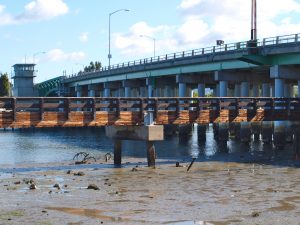 Directly across the narrow channel is Alameda, Towata Park, and the Aeolian Yacht Club. Adjacent to, and part of the pier area itself, is the shoreline trail that is an essential part of Bay Farm Island’s Shoreline Park. The trail provides joggers several miles of dirt and paved trail around the island. Since the trail needs a walkway through this area, one was built and, as is common with public access points on water, some people use the walkway as a pier. 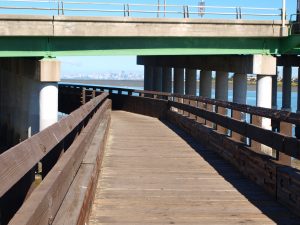 However, there are really two piers here. One pier is the remains of the actual Veterans Court Pier, an old stub of a pier that sits perpendicular to the water. The second pier is the wooden walkway that parallels the water and sits, for the most part, underneath the Bay Farm Island/Doolittle Bridge, the bridge that crosses the channel. Because most of the walkway sits underneath the roadway, it is almost impossible to see. It may be hard to find at first but it is also in a pleasant setting well worth a visit. 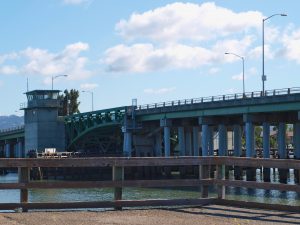 Environment. This is mostly a shallow water area. In fact, the first time I saw it, it was sitting over a nearly dry mud flat. However, that was during a minus-tide and just a few hours later there was considerable water to fish. In addition, even during most low tides, there is fishable water well within casting distance. Bridge pilings near the pier are heavily covered with barnacles and even have some mussel growth. The bottom is mud and appears to have clam or ghost shrimp holes. There are only a few rocks but there are a couple of barrels half buried in the mud so some obstructions do exist to snag a line. Typical fish caught here are jacksmelt, perch, flounder and sole, white croaker, and both sharks and rays. In addition, quite a few good-sized striped bass and halibut have been landed at the pier. I’ve also heard reports of sturgeon but have not seen them.

Fishing Tips. The most important tip here is to fish just before and after the high tide. Dependent upon the season, fish for perch, flatfish, stripers and/or sharks. Wintertime is the start of both prime perch fishing and starry flounder fishing (although their numbers are way down).

Large pileperch and smaller white seaperch will sometimes school in these waters by December. They are then joined by black seaperch and rubberlip seaperch in February or March and sometimes will stay in the waters until about June. However, there’s now a perch closure in the bay from April 1 until the end of July so while the perch may be in the water you can’t catch them. Luckily, some perch, especially black seaperch will usually be available after the closure.

Most perch will be caught on the bottom with high/low leaders using pile worms, fresh mussels, grass shrimp, ghost shrimp, or small pieces of market shrimp. Most locals prefer to cast out quite a way into the channel, just out from the bridge pilings. There seems to be a pretty productive hole in that spot.

Although the number of starry flounder seems to decrease each year, some are usually available from December through March when they move out into the ocean. While here, they can be taken on pile worms, grass shrimp, ghost shrimp, or strips of anchovy; all fished on the bottom with a fish finder leader or a Carolina-type rig.

Jacksmelt can be caught on a multi-hook leader fished with a float and small pieces of pile worms, shrimp or even anchovies. Jacksmelt are a hit and miss proposition. One way to check to see if they are around (when you’re fishing the bottom) is to occasionally stop your retrieve near the top when pulling in your line. If you don’t experience a bite after a minute or so, continue your retrieve. If present, jacksmelt will hit readily. Don’t waste your time fishing on the bottom if the fish are on the top, don’t waste your time fishing on the top if the fish are on the bottom. Make a habit of checking different water levels for different schools of fish.

Smaller walleye and silver surfperch, as well as white croaker, will show during the spring to fall months and all of these will hit a small piece of anchovy fished on the bottom or at a mid-depth level. But again, the surfperch cannot be kept until August 1.  Small shinerperch are common throughout the year and anglers can keep them during the perch closure. They rarely aren’t big enough to eat but do make good live bait for striped bass and halibut. 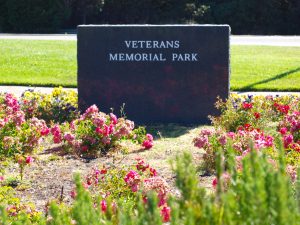 Summertime is the prime time for sharks and rays. Brown smoothhound sharks (sand sharks), leopard sharks and bat rays are the most common varieties. Small sharks hit best on a small piece of oily fish such as sardine or anchovy but cut jacksmelt has also proven to work. Although the larger leopard sharks can also be taken on cut bait, the pièce de ré·sis·tance bait, the primo bait, is live bait, especially small midshipman (if you can find them). And no Navy jokes, please.  Bat ray always seem to prefer squid as bait although when they are hungry almost any offering will work, everything from pile worms to cut fish to clams. Allof the various sharays are caught on the bottom and fairly heavy tackle and line is recommended; some of the leopards may approach five feet in length while some of the big ‘ol mama bat rays may weigh over a hundred pounds (and all the big ones are females).

Striped bass and halibut are the trophy fish at the pier. While the stripers are a commonly caught species, the halibut are a once in a blue moon catch. The stripers (yes stripers, not strippers) will be found in these waters from late spring until the fall. When present, they can be taken on the bottom using a whole anchovy or strip of sardine, ghost shrimp, grass shrimp. Anglers using these baits typically will use a hi/lo rigging. Some prefer live bait and will usually use a Carolina-type leader. Best live baits for the stripers include shinerperch, bullhead (staghorn sculpin) and mudsucker (longjaw goby). Local bait shops used to have all of these in good supply, today they are harder to find. For many anglers seeking out the stripers, the only thing needed is a rod and reel and an assortment of artificial lures. Everything from Hair Raisers to soft baits to spoons and a variety of plugs can work. Check with the locals as to what’s the “hot” lure. Am told by the “locals” that big stripers have been caught on plugs under the bridge lights at night.

If halibut arc in the area, and a few should show up every May to September season, live bait is the key, usually a shinerperch or small jacksmelt both of which you will probably have to catch yourself. Fish them on a Carolina-type live bait leader.

Special Recommendation. A California fishing license is required at the pier. 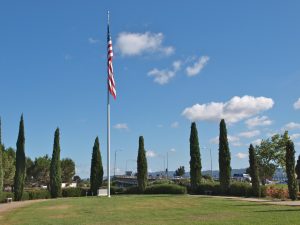 History Note. The local beaches have long been important for recreation. Alameda Island sits just across the channel from these piers and was once the home of a premier beach resort. Between 1879 and 1939, the areas which today encompass the Robert Crown Memorial State Beach, and nearby Crab Cove, were home not only to the bay’s largest and warmest beach but also home to spas, pools and, after 1917, the large Neptune Beach Amusement Park (with its hundred-foot Moorish tower entrance gate, Whoopee roller coaster, dancing pavilion, and eight-thousand-seat stadium). Notable events included California’s first professional baseball game and several professional prizefights. After the closure of the amusement park in 1939, the land underwent a series of changes (including use as the U.S. Maritime Service Officers School during World War II). In 1950 the small Veterans Court Pier was built by the City of Alameda. Measuring only 40 by 35 feet it was more of a mini-pier but it did provide another access point for local anglers. Estimates by the city showed an average use by roughly 50 anglers a week.

Facilities: None, with the exception of free parking (four and one hour parking) on the adjacent side street, Veterans Court. There are signs posted which say no parking from 2 A.M. to 4 A.M. There is an extensive walking trail on either side of the pier and to the west is a park area and tennis courts.

Handicapped Facilities: None. Railings are approximately 40 inches high on the walkway section of the pier.

How To Get There: From Alameda, take Hwy. 61(Encinal Ave.) south as it turns right into Broadway and then left into Otis Dr., follow it toward the Bay Farm Island and then turn right at the first street past the bridge (Island Dr.) and then make another right just after your turn – onto Veterans Ct. Follow to the pier. From the south. Take I880 to Hegenberger Rd. (as though you’re going toward the airport) and follow it to Doolittle Dr. Turn right and follow it all the way till you see the Alameda Municipal Golf Course. The first road past the golf course is Island Drive. Turn left and then make a quick right onto Veterans Court just after your initial turn. Follow it to the pier.