The “Old” Vallejo Pier — Gone But Not Forgotten

This was a pier frequently missed by anglers unaware of its location. It used to sit almost directly underneath the Sears Point/Highway 37 (Napa River) bridge that connects Vallejo to Mare Island and areas to the north. That shouldn’t be surprising since the pier was part of the old drawbridge which once connected the two areas. The pier opened in 1971 and became famous as a producer of large sturgeon. In 1980 an angler, George Gano of Vallejo, hooked and landed an eight-foot-long white sturgeon weighing 194 pounds. This is still the unofficial record for largest fish caught on a Bay Area pier, although there have been unsubstantiated reports of large bat rays nearly matching this weight.

Environment. The water here is truly estuarine as the location sits smack dab in the channel connecting the fresh water of the Napa River and the saltwater of San Pablo Bay (which is pushed up the Mare Island Strait by the daily tides). The result is a lessening of the number of species commonly caught by saltwater pier anglers but the pier presented opportunity for excellent striped bass and sturgeon fishing. Around the pier were mud flats and eelgrass that, at low tide, might be exposed. During high tide, flounders would move up into water almost to the foot of the pier. Fishing for the larger species was carried on toward the end of the 1,060 foot-long pier in the deepest water. Here the main problem was very strong currents complicated by strong winds that are common to the area most afternoons. The pier was a popular fishing spot due undoubtedly to the ever present chance for a keeper sturgeon. 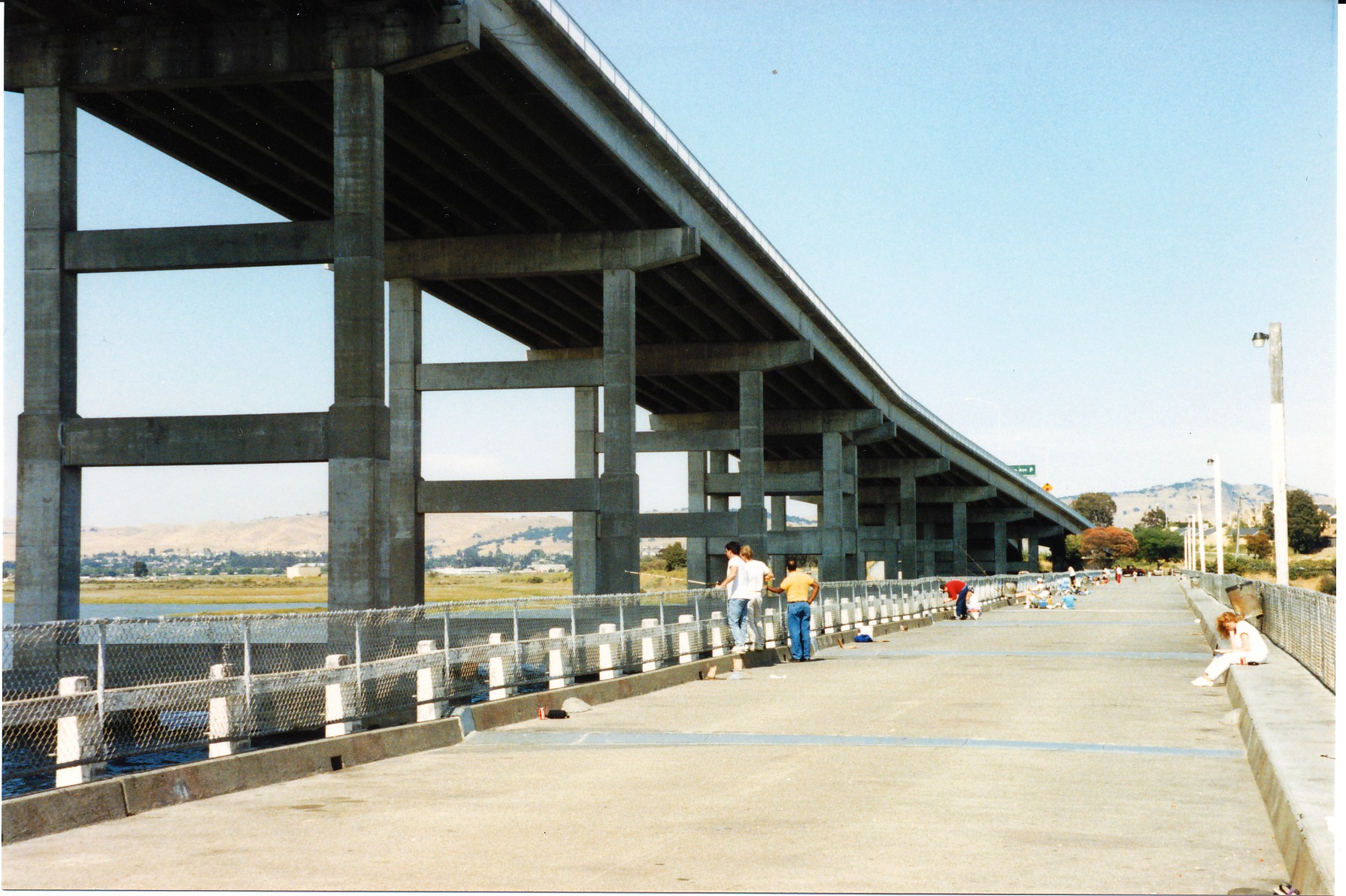 Fish caught here were starry flounder, jacksmelt, striped bass, white sturgeon, a few green sturgeon, and occasionally a bat ray or skate. What that meant was that most of the time you would not bring home many fish from a trip to this pier. Sturgeon, flounder, bat ray, and skate tend to be solitary and you were lucky if you caught more than one during a day of fishing. Jacksmelt of course travel in schools; if you were present when the school moved through, and you had the right bait, you could catch a mess of fish. Stripers added one more element, the larger the fish the more solitary they seem to be. At times an angler would catch a large striper, anything over 30 pounds, but those were fairly rare. At times a school of medium size fish would move through or even hang around the area and anglers would catch a number of 5-12 pound fish, but again that was rare. More common, especially September to October, were large schools of small, illegal striped bass, 11 to 14 inches in length, which were too easily caught on light tackle.

Fishing Tips. Best bait and rigging for the flounder was either pile worms or ghost shrimp followed by grass shrimp. Most baits were placed on a number 4 to 2 size hook on the end of a live bait, sliding bait leader. Easily purchased at most of the local tackle shops, this rigging allowed the flounder to mouth the bait and carry it without hesitation before it was finally swallowed. Generally this rigging worked better than a high/low leader. Flounder are very picky and if they feel any resistance will often drop the bait. Tackle needed only be heavy enough to cast and to handle a sinker heavy enough to hold the line against the strong currents often found here; and it could take four to six ounces of weight. 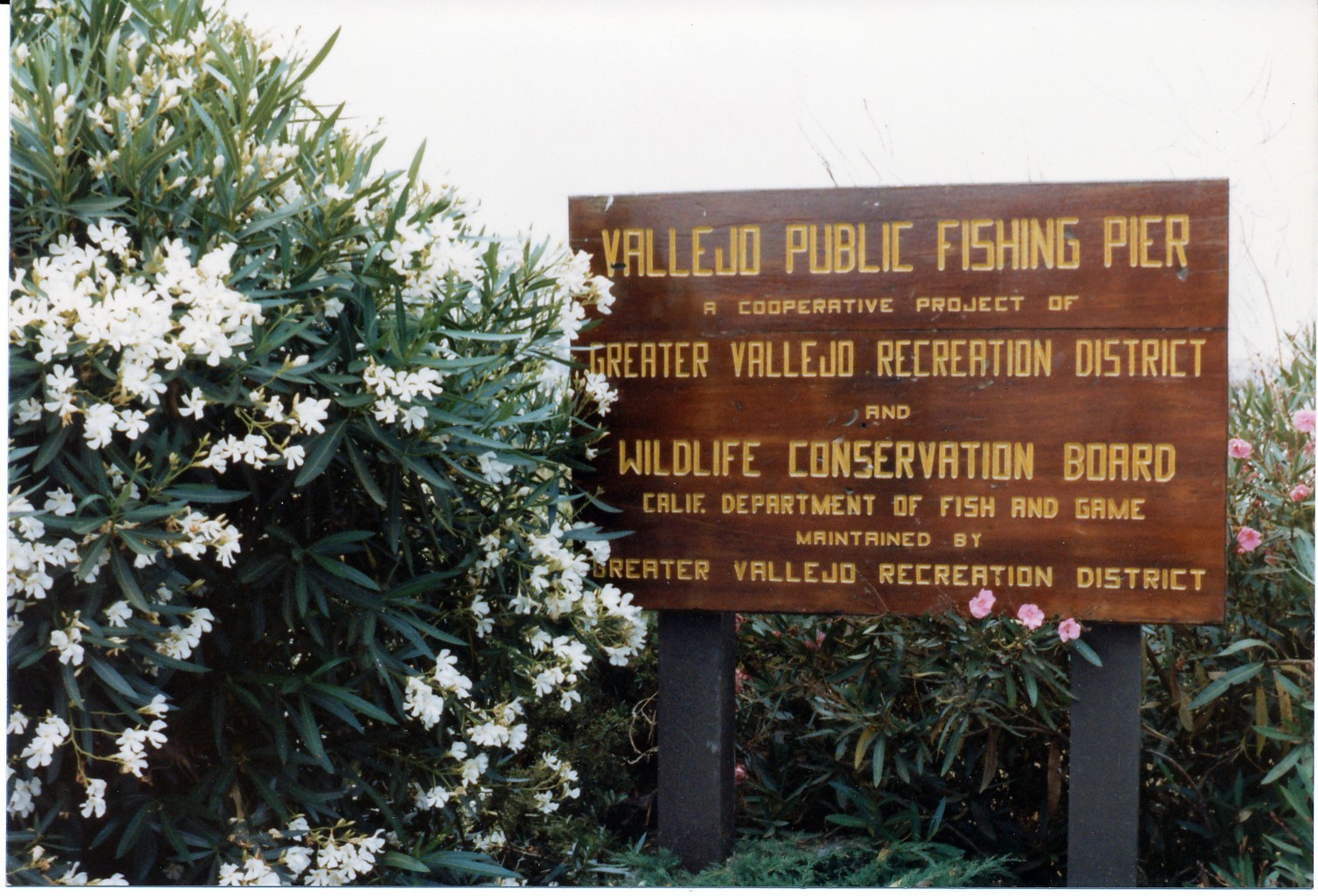 A similar rigging was often used for sturgeon although wire leader were the norm at the end of the line and bait was grass shrimp, ghost shrimp, or mud shrimp. Anglers also needed to be sure you use a heavy enough outfit—a heavy saltwater rod and reel loaded with at least 30 pound test line. Stripers would also hit this rigging and any of these baits. Another idea was to catch a few bullheads (staghorn sculpin) or shiners, or buy a few live mudsuckers. Often these, as well as frozen anchovies or sardines, worked best for the stripers. In addition, a high-low leader could be effective for the stripers. Finally, anglers occasionally used artificial lures on this pier. When the pier wasn’t crowded, and the wind was blowing toward the new bridge, anglers could cast out around the various bridge supports that were often a good spot for stripers.

History Note. The town was laid out by M.G. Vallejo and served as capital of the state in 1851 and 1852. The wharf originally located on this site was used from 1892 until the 1920s by the Union Brick and Tile Company. Later, part of that wharf was used by builders who constructed a drawbridge linking the eastern shore of Vallejo with Mare Island. When a new Sears Point Bridge was built in 1971, all but a 1,060-foot section of the drawbridge was demolished, just enough for a fishing pier.

The old wooden pier suffered fire damage four different times—in 1973, 1983, 1987, and 1994. Each time parts or all of the pier had to be closed but the first three times money was found to repair the pier. Signs said don’t build fires on the pier, but some people never learn. The fire in 1994 finally led to closure, and later demolition, of the pier. The pier, home to a record that can no longer be broken (because of today’s slot/size restrictions on sturgeon) was demolished and no appearance from shore indicates where the pier once stood.