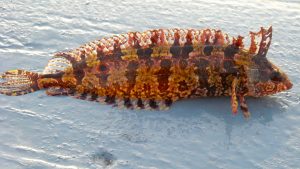 Habitat: Intertidal shallow-water areas near rocks or kelp. Recorded to a depth of 59 feet.

Piers: Found at piers that have a heavy growth of kelp or seaweed. Best bets: I’ve taken them at the Cabrillo Mole (Avalon), the Paradise Cove Pier (Malibu), Coast Guard Pier (Monterey) and the Princeton Harbor Pier. I’ve also taken them at several Bay Area piers including Agua Vista (in San Francisco), Berkeley Pier (East Bay), and Elephant Rock (North Bay). At the first two they were inshore by the rocks, at the latter the pier sits on a rock.

Bait and Tackle: Light to medium tackle and small, size 8 to 6 hooks. Preferred baits appear to be pieces of worm, blood or pile, while small pieces of shrimp and mussels will also entice them. 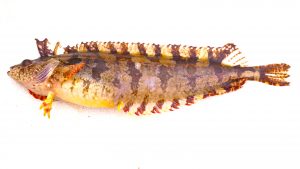 Comments: A pretty little fish that likes to hang by the rocks, dart out to grab the bait, and then head back to the rocks.