I was around 8 years old and fishing with my dad about midway out on the ship as all of it was still open at the time. There are two men fishing to our left about 30 feet further out.

All of a sudden, WHACK! I’m seeing stars and feeling EXTREME pain on the side of my head. One of the guys had been casting a big plug and somehow managed to cast 90 degrees to his right and imbed both sets of treble hooks in my scalp just above my left ear. I’m screaming from the pain and blood, my dad’s frantically trying to help me but I wasn’t exactly keeping calm and still for him. The guy that did it never even came over to help or see if I was okay. The other one did, and explained that the one who did it was not quite “stable” and doesn’t really understand what he did. Fortunately, the barbs were not deep in my skin and they were able to free them without cutting or pushing them through. I was quite happy about that.

That, and two other events at the pier that summer added up to enough trauma to make me argue to go to Capitola or Santa Cruz for years every time dad wanted to go to Seacliff.

Number two was the time we were playing in the water and I had to go to the bathroom. Dad takes me to the outhouse and waits outside while I’m in there. Don’t ask me why, but for some reason I was wearing cut-off jeans and no underwear. Okay, I’m all done and start getting everything back together to go back to the water. I start to zip my shorts and the zipper jams about halfway up. YOW!! Guess what it jammed on! Again, I’m screaming and dad’s pounding on the door trying to get in because he has no idea what’s going on. I finally gather my senses enough to open the door and after about 5 minutes of dad yanking on both the zipper and my ummm.., errr, you know, he frees me. Oh man, I was hobbled for days.

Number three occurred while we were playing in the water also. I’m about knee deep in the surf playing with my sisters when I feel what I thought was a towel or shirt or something like that wrap around my foot and ankle. I kicked it off but couldn’t see it due to all the sand stirred by the waves. I don’t think anything of it until about 30 seconds later my skin starts to feel warm where it hit me. Thirty seconds more and the warmth turns to tingling, then to fire. I run out of the water to my parents and we all see that my foot and ankle have about a million red dots on them. Jellyfish! Turned red, swelled up and hurt like hell for part of the day, but I was okay after a while.

Seacliff: fight or don’t fight? With the beautiful weather and the past success I’ve had at Seacliff for the perch I figured I’d head back out for another shot. I got out around 7AM and waited for the gate to open, which they finally opened around 8. It was low tide when I arrived Sunday morning so I decided my best shot would be to fish off the end of the pier along the cement boat in the deeper water. Away I’m fishing with no success waiting for the water to rise when I notice a school of 5 salmon swimming near the surface on the south side of the pier. They dwindled around for a few seconds and then were off again. A wonderful sign considering the season opens at the end of the month. The pier is starting to fill up around 9AM and still no action, so I decide to wait it out till the top of the tide. I have 2 poles with me, one is in the water and the other isn’t but is propped up against the rail.

At 10:30 a father and son arrive and decide the best spot on the pier would be in between my two rods. One is placed along the boat and the other one that’s not in the water is propped against the rail so no one can cast over my line. I don’t say anything thinking hey it’s cool they’re probably going to be fishing straight down off the pier so I’ll let it ride, even though the spot between my poles wasn’t even enough room for one. Just about pushing me out of the way, the father turns to his son and says, “Hey we got a line in right here (referring to my pole) and we’re either going to have to cast over it or someone’s going to have to reel it in” and looks at me! I blinked in astonishment. Not believing the words I just heard, I said, “You come out here at 10:30, stand in between both my rods and think I should reel in because you want to fish here?????” He tells me “Yes” and smiles.

Obviously wanting a confrontation, which was pretty dumb knowing that in a twist of my wrist I can throw this guy in the drink and send his kid running home crying wondering what happened to his daddy. For some reason I didn’t, I thought of the trouble I’d have to go through and maybe the costs ($$$) I would have to pay if I did such a thing. Anyways, the guy proceeded to cast over my line numerous times and smile until I finally had enough and decided I better take off because it was about to get ugly. I left very upset knowing I did the right thing but really deep down would’ve liked the satisfaction of “setting this guy straight”.

I know by looking at what he was using he wasn’t going to catch anything with all the luck in the world so I guess that’s a little satisfying. If that loser of a father happens to be reading this for some odd reason I’d watch out because many people I know will toss fools over for that kind of crap. Way to teach your kid how to do it. The kid by the way was far more intelligent then his father not once did he even consider throwing it over my line. He can thank his son for one more reason he didn’t get tossed since I didn’t want to ruin his day for his father’s stupidity. Jason “bayrunner” 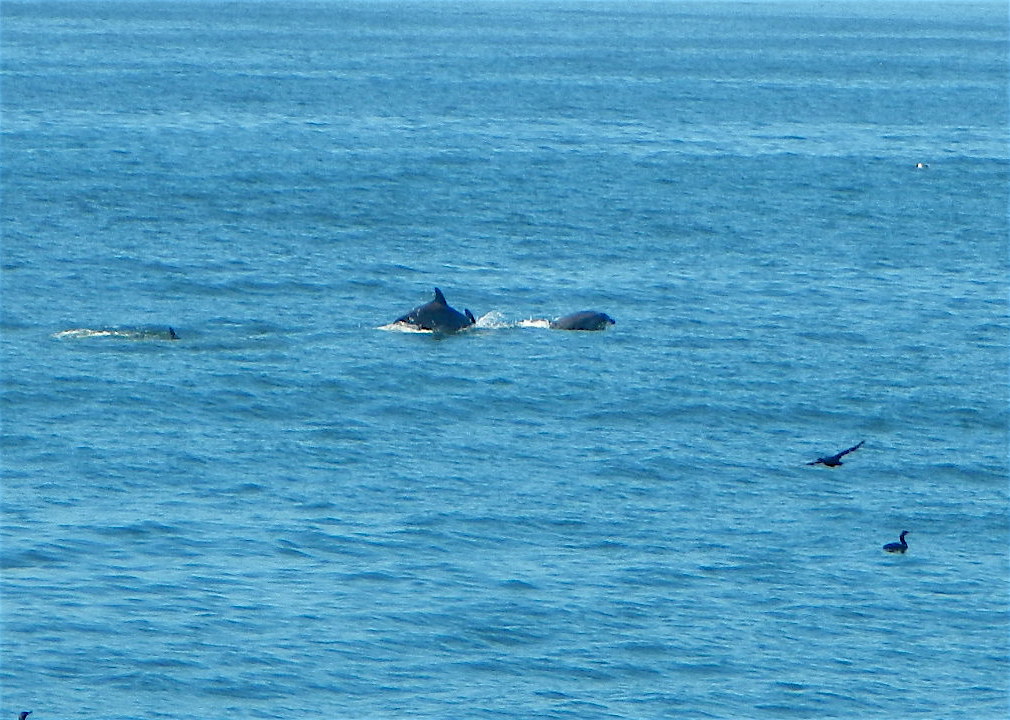 April is just great. Plenty of fish all over the place… Started the weekend early and hit Seacliff on Thursday and Friday. The wind was blowing on those days so the salmon got a break from me, for I don’t care to have to play the beat the wind game. Brought a perch rod and my live bait gear in case some bait came in. Never found any bait either day but the perch fishing was fantastic. Had to have gotten about 20 black perch (locals call them buttermouths) and a few large rubberlips one pushing 3-lbs. Pile worms on a slider fished along the cement ship did the trick. Wind picked up early as expected and I smiled as I stood upon the stable pier and peered out at the whitecaps. Two whales also made a showing on route towards Capitola. Only got a quick glimpse at them so I couldn’t tell you what kind for a perch was engulfing my worm at the time.

Headed back on Friday and nailed a couple of buttermouths but the fishing slowed dramatically along the ship from the day before (maybe their lips were sore). Anyways no worries the calico perch and rubberlips moved down towards the breakers and were found willing and ready underneath the pier. Fished worms again and sand crabs and got quite a few. Met a lurker of the board on the pier who was a nice fellow hopefully he will start posting soon so I know what’s going on when I’m not there (hint, hint). Also saw roughly around a 25-lb rogue striper making a round around the pier and two leopard sharks working the area also. All we need is some bait inshore and the fishing should take off around there. Jason “Bayrunner” – out.

Had to meet some friends over in Santa Cruz yesterday and decided to take a look at the battered Seacliff pier. A large metal storage container washed up from somewhere during the last storm crashed and knocked out several pilings on the north side of the pier. There was a decent sized gap with no supports and two pilings still connected that now swing back and forth each time a set hits. It doesn’t look good and looks to be quite a bit of work to repair. The cement ship itself looks like it even separated more in the middle of the ship and the end seems to have sunk down even more. I really wonder if they will not close her for good. It’s going to take a lot of voice I believe to convince repair work to this structure. Disappointed I left and went to Sno Whites for breakfast. I saw one of the local pier rats there and chatted for a bit. 9 pilings total were knocked out and no repairs will even be considered until the storm season is over. Let’s hope she hangs on.

— The pier was closed for a period of time — 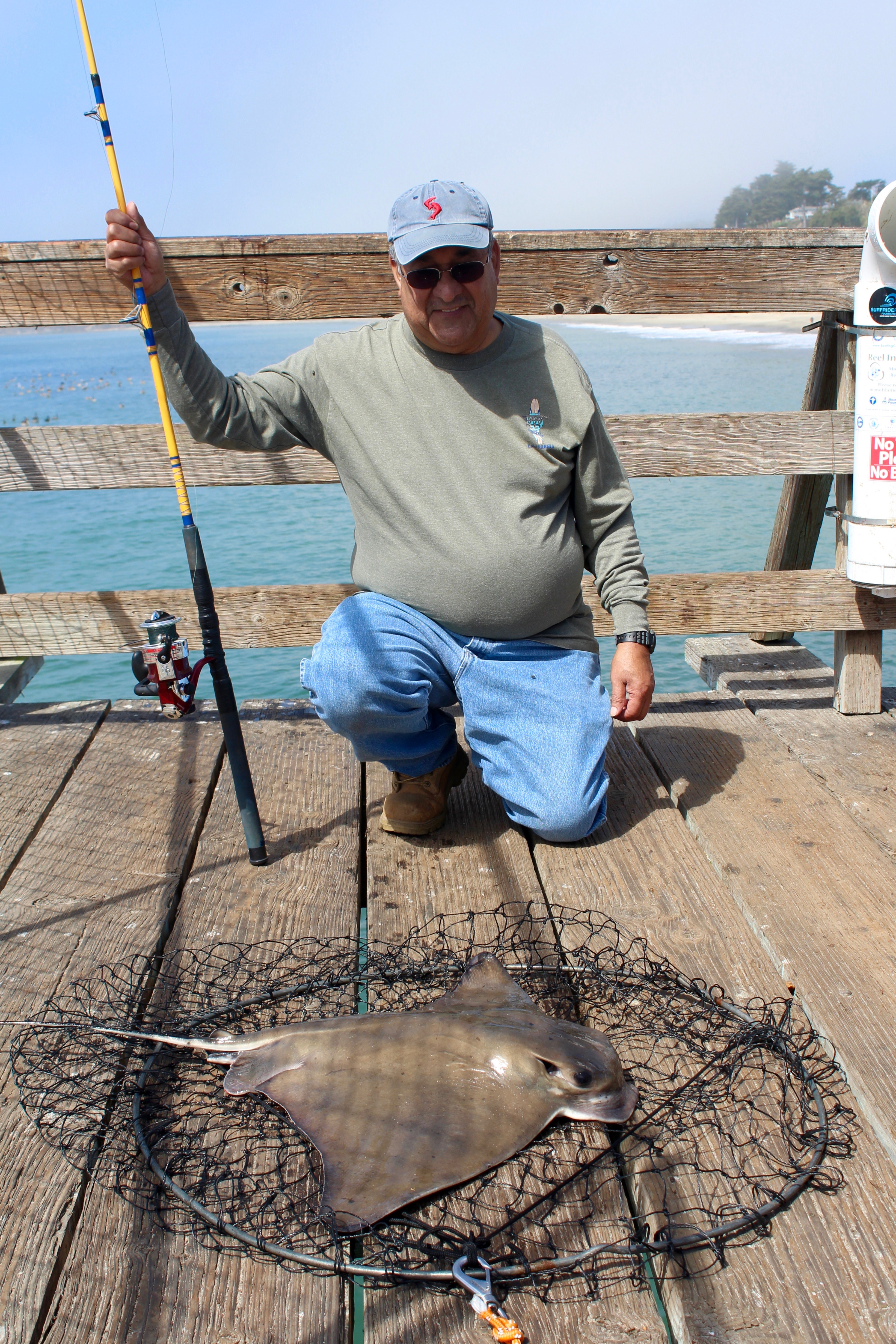 Started off at 8:00am. Very high and rough surf, not windy but definitely cold. Two other fishermen were present, each one at a corner facing the cement ship. Both men were after Rockfish, they were using sliders with #3 or #4 Pyramids. Looks like they were both using Pile Worms attached to a #4 hook with a pink bead. They didn’t seem to be having much luck.

I set up on the right side, next to the fisherman in the corner. Set my ABU 7500 w/ Ugly Tiger with a high/low. #1 hooks and a chunk of anchovy, #3 weight. Surf was too rough, so moved up to a #5 weight. Immediately started getting nibbles. After loosing bait two times, figured it must be White Croakers or Perch. Decided I need to use smaller hooks.

Changed over to #6 hooks and put on a pieces of Anchovy with a squid trailer. Not more than 30 seconds in the water and Bam! Found a small Barred Surf Perch. The action was hot for about 1 hour, same spot about 20 yds from the pier. After that hour, the Walleye Perch, Speckled Sand Dabs started to come out. Averaged a fish about every 10 minutes.

They did a great job fixing up the pier. New, pressure-treated planks, new fish cleaning sink. The cement ship looks to be in poor condition. The stairs that used to lead to the ship have been removed and Danger Signs posted all over to stay off. Anyway, a fun morning of fishing. Glad I decided to take the day off from work and go back to the place my dad taught me how to fish.