Species: Microgadus proximus (Girard, 1854); from the Greek words micros (small) and gadus (codfish), and the Latin word proximus (next).

Habitat: Prefers a soft, sand or mud bottom. Found near surface waters (when young) and from the shallow, even surf zone environment, to deeper water. Recorded to a depth of 902 feet. 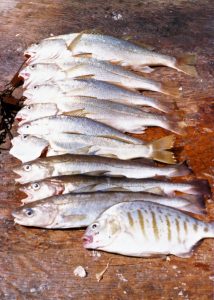 Bait and Tackle: When schools of tomcod move in, anglers can expect fast and furious action. The best bait appears to be pile worms, a small strip of anchovy, or a small strip of squid. Hooks should be small, size 6 or 8, and the best technique is to cast out, allow the bait to sink, and begin to retrieve as soon as the bait hits bottom. The tomcod usually will hit the bait mid-depth as it is being pulled up.

Food Value: Most tomcod are really too small for eating although some people like to pan-fry them as they would any small fish. The flesh is considered good quality with firm texture, a mild, sweet, delicate flavor, small flakes nd low fat content.

Comments: When I lived in the Bay Area in the ‘70s one of my main fishing spots was the Pacific Pier and one of the most common fish I caught was Pacific tomcod. I caught them during every month of the year but the summer months were generally the best. I caught a few at other piers—primarily Fort Point and Fort Baker, but never in the numbers seen at Pacifica. I moved north to Mendocino County in 1979 and soon after began to fish the Point Arena Pier. Once again good numbers of Pacific tomcod began to show up. However, that pier was destroyed in a winter storm in 1983 and did not reopen until 1987. After the reopening of the new pier I never saw the same numbers of tomcod that I had seen previously. Visits to Pacifica in the past 30 years have shown much of the same — few if any Pacific tomcod. I’m not sure if I just missed them or if their numbers have decreased.

The small tomcod are fun to catch on light tackle and they provide a major source of fun for children angling in northern areas (Washington north). They are not to be confused with white croaker (Genyonemus lineatus) that are generally called tom cod in southern California.

According to Milton Love (one of our favorite marine biologists) “this species is very closely related to saffron cod.” Although I had heard of cod cooked in saffron, I had never heard of saffron cod! It turns out saffron cod, Eleginus gracilis (Tilesius, 1810), is a small, similar-looking fish found in Pacific arctic waters (the arctic-boreal Pacific). The range is from Korea and the Sea of Okhotsk in the west to the northern Gulf of Alaska and Banks Island in the east. Although small, they’re commercially fished with the major fishing grounds for Russian boats in the western North Pacific: Peter the Great Bay, Sakhalin region, Sea of Okhotsk and Kamchatka waters. Alaskan fisherman typically fish in Norton Sound. Most of the commercial catch winds up in Russia although the fish is also popular in Japan.