History Note. The town of San Clemente was developed by real estate developer (and former Seattle mayor) Ole Hanson during the land boom days of the “Roarin’ Twenties.” His vision foresaw a “Spanish Village by the Sea,” and he was one developer who saw his dream, or at least part of it, come true.

As recorded by the San Clemente Historical Society—Hanson said, “I vision a place where people can live together more pleasantly than any other place in America…   the whole picture is very clear before me… I can see hundreds of white-walled homes bonneted with red tile, with trees, shrubs, hedges of hibiscus, palms and geraniums lining the drives, and a profusion of flowers framing the patios and gardens… I want plazas, playgrounds, schools, clubs, swimming pools, a golf course, a fishing pier and a beach enlivened by people getting a healthy joy out of their life… I do not want people repulsed and sent away by ugliness in other communities… I have a clean canvas and I am determined to paint a clean picture.” He wagered all of his financial resources on his dream city. He built a hospital, a community clubhouse, pier, a golf course, beach club with Olympic size pool, parks, tennis courts, a baseball diamond and stands as winter quarters for a Seattle ball team, bridle trails, a school, and a church. He built his own home, now called the Casa Romantica, and lived there with his family for approximately five years. When the City was incorporated in 1928, Ole Hanson was selected as the first mayor, but declined in favor of Thomas Murphine. Hanson remained as a city councilman.”

Hanson had provided the inspiration, financing acumen, and management skills to see his town started and his “Spanish-style” homes, affectionately called “Oles,” providing housing for more than a thousand people. Nevertheless, the Great Depression that struck in late 1929 claimed Hanson as one if its victims. By 1931 he was bankrupt and his local plans (and dreams) were at an end. Soon after, he left San Clemente. 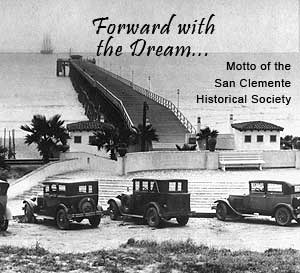 The pier itself was one of Mr. Hanson’s gifts to the citizens and was designed and constructed by one of his friends—Bill Ayer—for $75,000 in 1928. The pier was built where a coastal arroyo with gradual slopes seemed to form an amphitheater of sorts to the ocean (in contrast to most of the area’s steep coastal bluffs). The area in which the pier was located is called to this day “The Pier Bowl.”

Wharf  Will Be Built — Gift Of Another Thousand feet Of Beach

Another streak of generosity has been manifested in the disposition of Ole Hanson, owner and builder of the Spanish Village, for he now announces that he has decided to raise the limit and give the people three thousand instead of two thousand feet of beach. The purchases of property in San Clemente thought him most liberal in his first award, and we be rejoiced to hear of his latest decision.

But his generosity does not stop there. He has decided to build a wharf for the people. This will prove the best of all news, for many have been asking how that could be accomplished. Mr. Hanson does not know at present time where it will be placed for that part of the program is up to the government and it will have to be built wherever Uncle Sam designates.

The size of the wharf to be erected will also be governed by the same gentleman who is generally depicted as wearing a plug hat and has his pantaloons buttoned under his shoes.

This notion has been in Mr. Hanson’s system for some time but he did not want to say anything about it until he had all arrangements perfected, but as the notion grew it crowded out most everything else until he finally had to spill the beans.

The town of Oceanside but a short time ago voted a large bond issue for a like enterprise, and the work there is going forward, but that is going to cost the lot owners just so much per. Here in San Clemente we are to have a wharf as a gift from the builder without costing the lot owners a thin dime. And it will be doubtful if Oceanside or any other place on the South Pacific will have a prettier one than Mr. Hanson will have built, for he is strong in doing a thing right if he does it al all.

The tunnel under the railroad track leading from the bowl to the beach will be commenced within a very short time now as the architect’s plans are completed. There will be a world of cement used in this undertaking and when completed it will be a thing of beauty…

It is not unlikely that the new wharf will be constructed somewhere in near proximity to this underground entrance to the seashore, and should this be done it would give visitors a close-up view of the seals disporting themselves on the rocks bearing their name. —El Heraldo de San Clemente, The San Clemente Herald 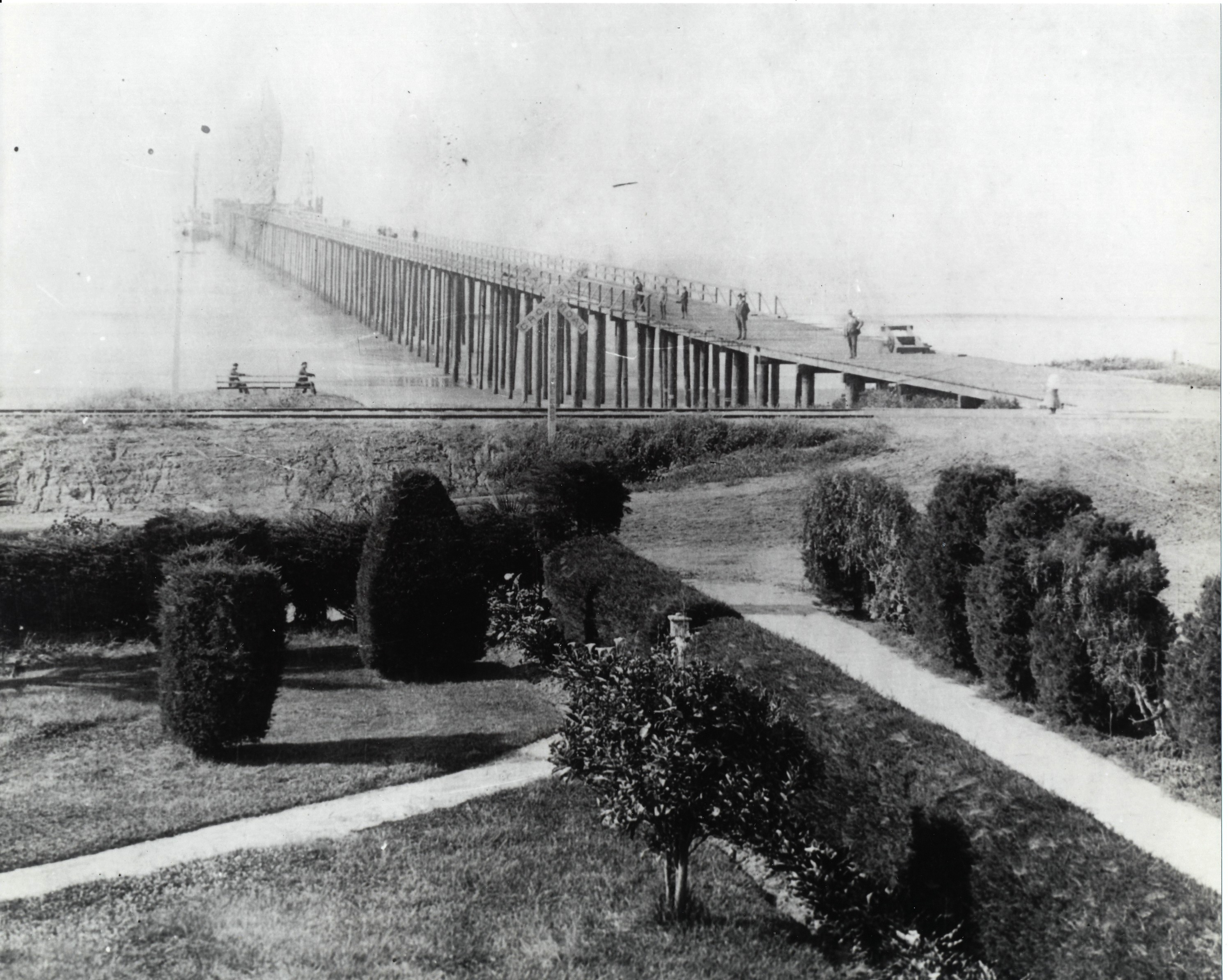 San Clemente’s new pleasure pier, costing $50,000, is to be erected at once, following the award of contract to Merrit, Chapman & Scott of New York and Long Beach. The new pier is to rise in the center of about 3000 feet of beach, and will be 1200 feet in length with 22 feet of water at its extreme end. It will be a decided attraction to fishermen, and it is declared that the fishing is excellent in this portion of the ocean front, while it will make possible the landing of passengers from yachts and power launches. The pier is a gift to this new beach city from the founder of the city, Ole Hanson.

The new San Clemente beach club was opened last week with large crowds present. This includes a big outdoor swimming plunge, which was patronized to nearly its capacity. San Clemente has come to be one of the most popular resorts in the Orange county string of beaches, and a number of Covina people own property there. —The Covina Argus, April 27, 1928

The pier quickly became a town favorite, a place where both youth and adults could enjoy a day fishing or simply walking and relaxing. It also apparently became a favorite site to smuggle liquor into the county during Prohibition.

San Clemente, Sept. 5.—Holiday traffic was the heaviest in San Clemente since 1930, according to Chief of Police Thomas F. Murphine Jr. Camping spaces on the beach near the depot and at the state park were filled. Opening of the lobster season brought crowds to the pier that broke all precious records. More than 250, the majority being local people, were reported as fishing fro lobsters with nets and lines over the week-end. Quantities of yellowtail also were caught. The law that all lobsters taken under 11 inches or over 14 must be put back int othe ocean is to be strictly enforced this year, Mayor Murohine states. —Santa Ana Register, September 5, 1933

Sportfishing boats as well as fishing barges (Mary Lou. Melrose and Ike Walton) operated from the pier for a number of years and it was during those early years that the local youth first developed an easy (sometimes) way to make money. The kids would line up their wagons (soon called fish carts) to carry the tackle and the fish of weary fishermen returning from the deep blue sea. The kids would get 20 or 25 cents to carry the heavy loads from the end of the pier back to shore. It was good money for the kids and a good way to rest for the anglers. 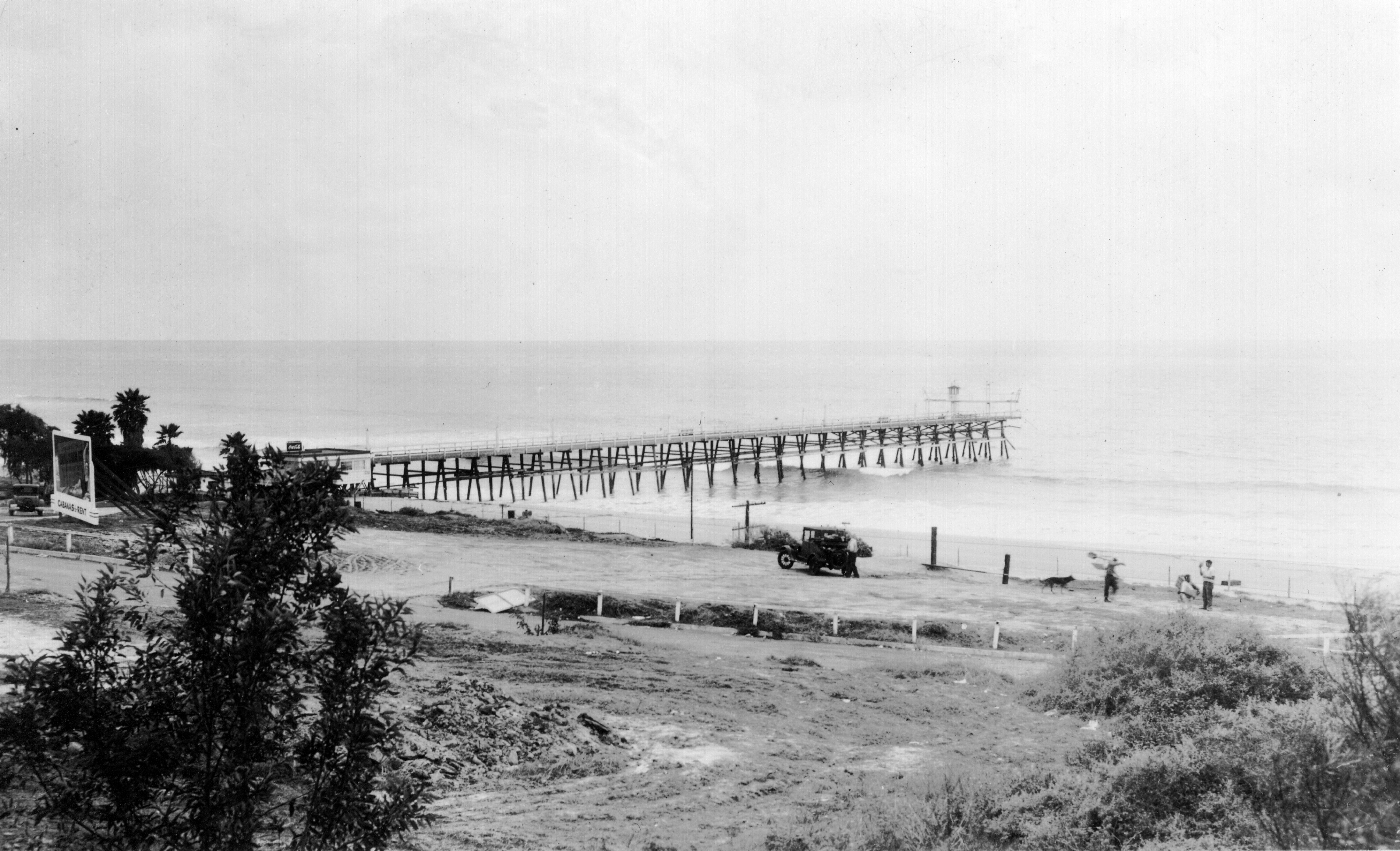 The so-called hurricane that hit the South Coast in 1939 destroyed much of the pier including the café, tackle shop, and the Owl Boat Co. fishing operation located out at the end of the pier. The pier was rebuilt for a modest $40,000 in 1939 but damage, and higher bills for repair, would again visit the pier. 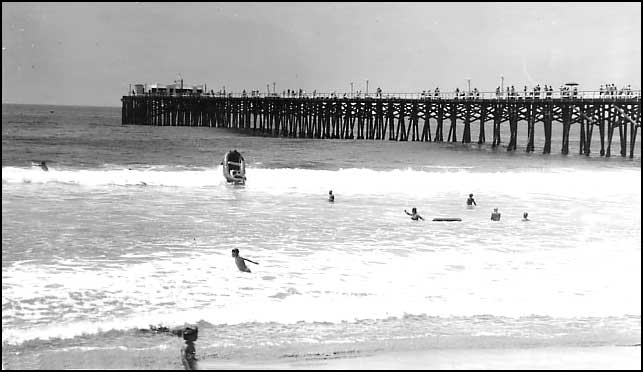 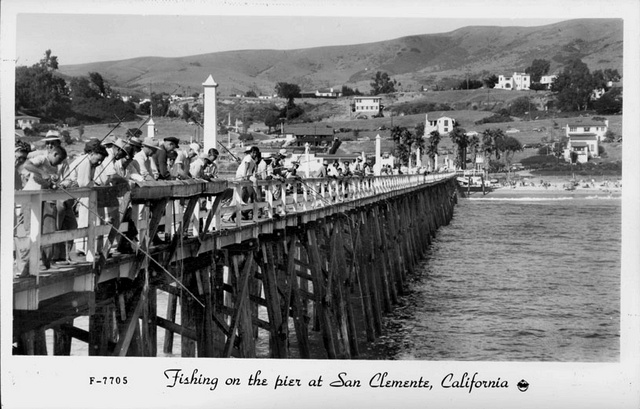 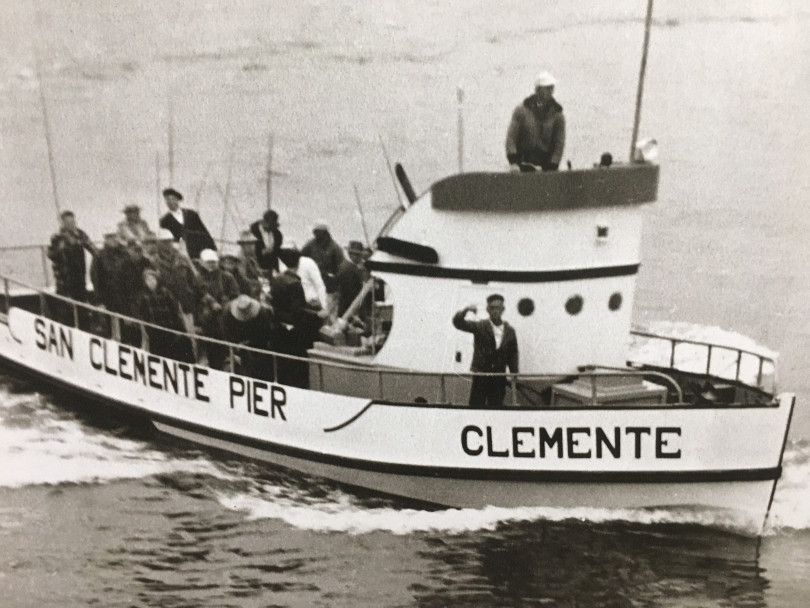 In 1947 Don Hansen started San Clemente Sportfishing, an operation that would be home based at the pier for nearly a quarter of a century. Included in his boats in the ‘60s were the Sum Fun and the Reel Fun. In 1971, with the opening of Dana Point Harbor, he moved his boats to the harbor’s East Basin and changed the name of his business to Dana Wharf Sportfishing 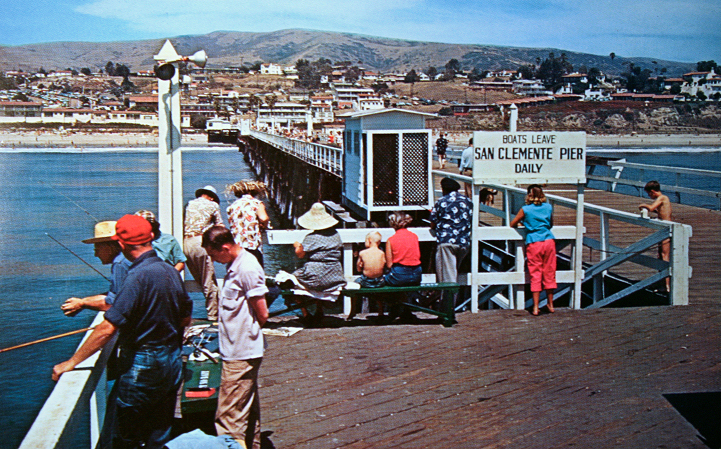 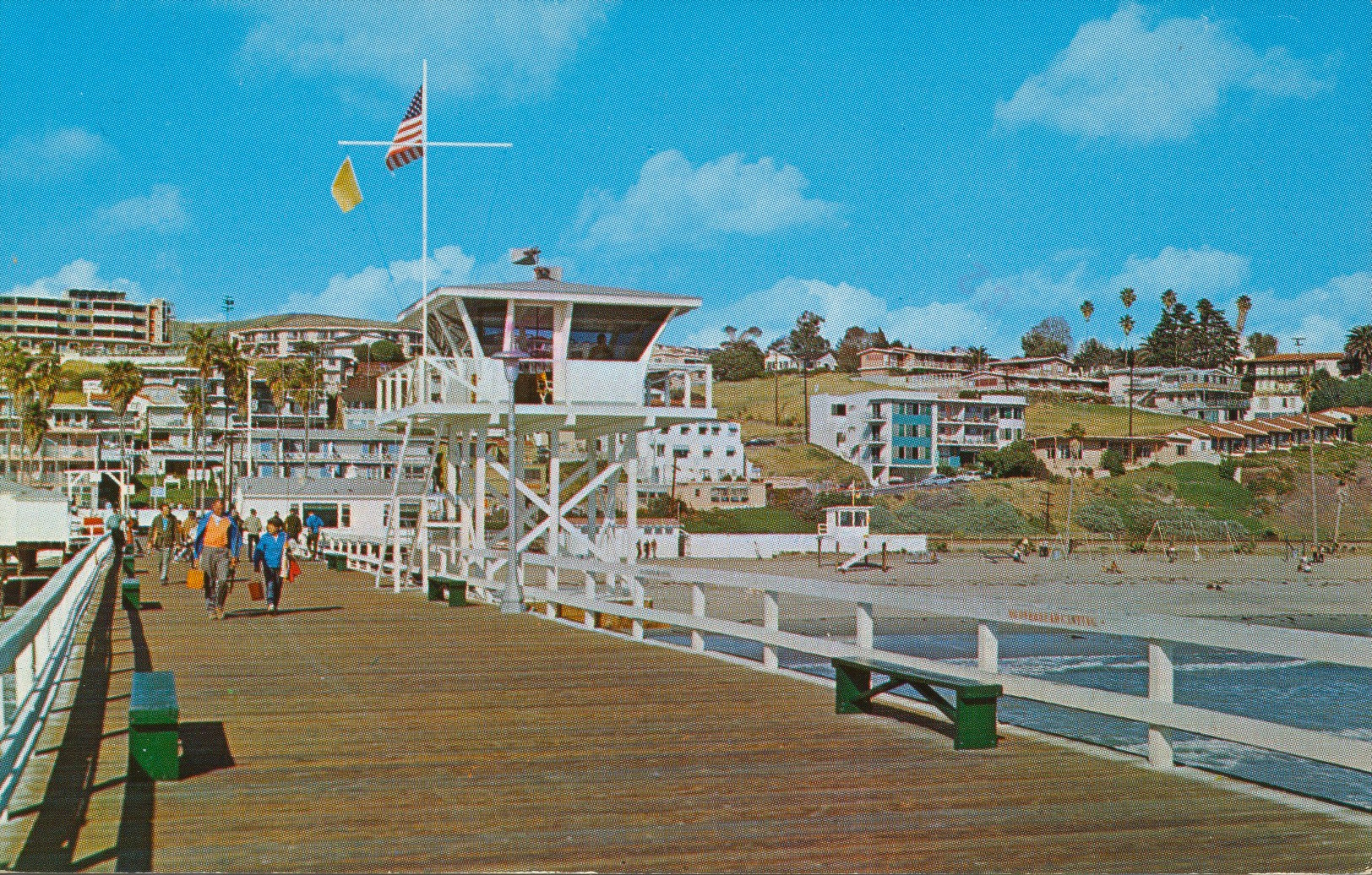 In 1979, the City of San Clemente in partnership with the California Wildlife Conservation Board renovated the pier to the tune of just over half a million dollars. But then, just four years later disaster struck.

In 1983, 27-foot high waves, generated by El Niño winter storms tore out 400 feet from the end of the pier and 80 feet from the mid-section area, just past the surf area. Similar to many of the towns that suffered damage to their piers in those monster storms, the question came up as to who would pay for the repairs and reconstruction of the pier? Near the front of the pier is an engraved plaque that presents a partial answer, “In Honor of these who donated one thousand dollars or more to the restoration of the pier after the March 1, 1983 storm.” Listed are thirteen local families and organizations. Additional money was needed and eventually FEMA paid 75%, the city $100,000, private donors $37,000, and state and county donors the rest (including the Wildlife Conservation Board and the State Lands Commission). The $1.4 million in repairs completed in 1985 (some source say $4 million) were much more expensive than those in 1939. When rebuilt, the end section was built 3.5 feet higher and polyethylene-coated steel piles were used to help the pier better withstand winter storms. In addition, the new wooden decking was designed to “blow off” in cases of huge waves that might top the pier deck in an effort to relieve uplift pressure.

Luckily, this is another pier saved from the destruction of the 1983 storms. Much of the end was lost to those storms but the pier has been rebuilt and even improved.

But Mother Nature wasn’t finished. In 1988 the pier’s end was severed by 22 and 24-foot-high waves. Warm-water El Niño storms in 1997 and cold-water La Niña storms in 1998 did additional damage—and sand erosion was significant.

A pier’s structure is constantly under attack, from the pounding of the Pacific’s relentless waves to the tiny creatures that can humble the mightiest of wooden pilings. San Clemente’s 260 piles (connected together crosswise in 75 bents of three to five), both wooden and steel, are unfortunately no exception. The wood above the surface can suffer from mildew, rot, and termites; marine bores can chew wood under the water. Steel piles are constantly subject to rust. Some in the town question the value of the pier and its costly repairs but to date the citizens have said no—the pier will remain.

San Clemente itself was named after San Clemente Island. The island was given its name about November 25, 1602 by the Spanish explorer Sebastian Vizcaino. He named it San Clemente in honor of Saint Clement whose feast day is November 23.

Facilities: Lights, benches, and fish-cleaning sinks. At the end is located the “Pier Grill” that is a combination snack shop and bait shop. It’s open Tuesday – Sunday; hours are 7-4 Tuesday-Thursday and Sunday, 7-5 on Friday and Saturdayy. Frozen squid, anchovies, shrimp, mussels and mackerel are available at the shop. The fancier Fisherman’s Restaurant near the entrance. A parking lot is located just up the street; cost is $1.50 an hour (although you only have to pay from 10 A.M. to 5 P.M.). Limited bait and tackle is available at the liquor store across the street from the pier.