As I was having a great day surfing I could see all the activity of the boats and fishermen on the pier. I went to step off my board and I put my foot right into a shark’s mouth. I had put my full body weight into it so the teeth immediately punctured my foot. As I pulled it up it was a bloody mess. It was a good-sized shark and I yelled for the lifeguards.

As there was no Dana Point Harbor, everything happened at the pier. Not only did the boats launch from the pier and anchor outside for the night, but the fisherman would often “clean” their fish at the pier as well. As I hobbled over to the lifeguard stand I was picturing this big shark that had just attacked me…but I knew it was only the head that had been carelessly discarded by one of the fisherman at the Pier.

The lifeguards looked in earnest for the shark head in the waves, or even the fisherman that had caught it. This was to no avail as I was transported to the emergency room at the South Coast Hospital in Laguna Beach (pre-San Clemente Hospital).

San Clemente — On January 8, 2009 Richard Thornton was walking along the beach near Mariposa Street in San Clemente. It was 11 AM and the sky was slightly overcast. The ocean was glassy smooth with the surf running 1–2 feet. No marine mammals were observed in the area. Thornton reported; “I was called by a friend who told me that a Great White Shark was in the water by the pier and to hurry down to check it out. Another person I know had just seen possible the same shark at State Park 3 days prior. When I arrived we watched the shark thrash around in the water for several minutes. It was just outside the surf, 20–30 yards from shore. I estimate the shark to be 12–15 feet in length with huge fins, including a dorsal fin that was at least 18 inches high. It rolled at one point before lifting its entire head several feet out of the water. It was amazing how large It was. One surfer got out of the water right away and asked if it was a whale or something.”

San Clemente — On January 14, 2009 Dave Schulte was entering the water to surf at Riviera Beach near Seal Rock, between the pier and San Clemente State Beach. It was 7 AM with a sunny sky and light breeze. Water visibility was estimated at 15–20 feet with a temperature in the upper 50s Fahrenheit. The ocean was glassy with a one-foot swell and ‘no bump on the water.’ Schulte reported; “I was walking towards the water when I noticed a lot of turbulence in the water next to Seal Rock about 500 yards from shore. The seals had moved quickly away from the waters edge and were barking and making noise’s like I have never heard before. Then I observed a Great White Shark, about 15 feet in length, with its head out of the water and mouth open. It continued to move throughout the area for at least 20 minutes. When the seals calmed down I went into the water, about 30 minutes later.” Dave Schulte is very familiar with juvenile and adult Great White Sharks having assisted in several of our research projects. Caution should be exercised when utilizing this location for your ocean water activities. 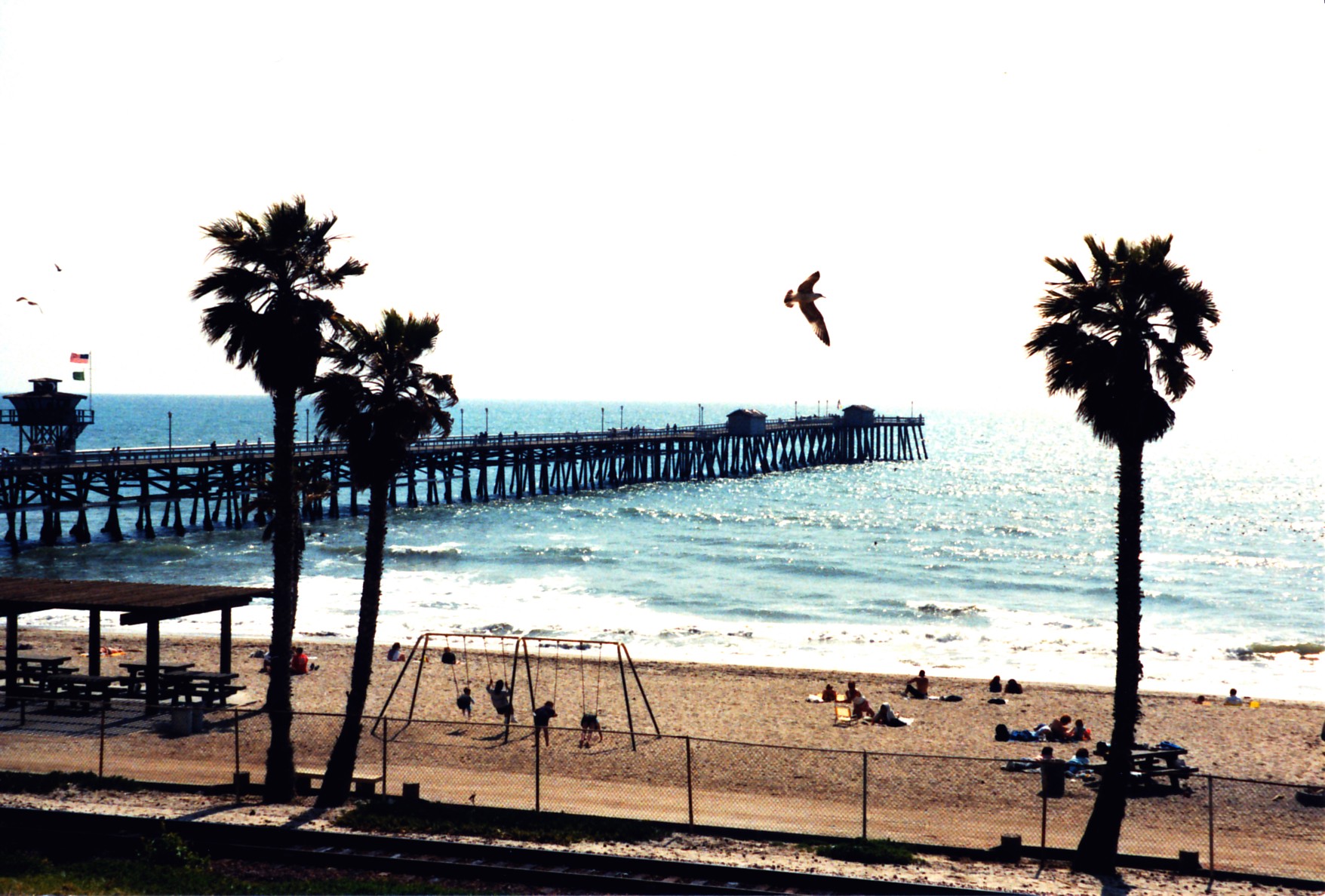 <*}}}}}}}}}>< —  Sometimes I’m surprised when youngsters (anyone under 25) act as though they have a monopoly on protecting this planet—and its creatures. They believe us oldsters, especially fishermen, have screwed things up and left it to them to clean up the mess. Right? It certainly overlooks the contribution of a few people like John Muir, Rachel Carson and the esteemed conservationist (and angler) Frederick Holder. The following editorial on protecting seals is from a 1926 edition of the local paper. Geeze, I didn’t know people were even aware of the environment back then.

Something should be done to protect the seals that sun themselves on the rocks but a short distance out in the water from the San Clemente waterfront. We have been informed that within a remarkably short period no less than twenty-five of these animals have been washed ashore bearing bullet holes received at the hand of some miscreants.

Residents of the points state that every little while there can be seen a small boat hovering in the vicinity of the rocks and occasionally the sound of firearms can be heard from that direction. In one instance quite a large boat bearing sails stood off from the rocks while two small boats were over to the playground. In due course of time the carcasses of dead seals began to float ashore with the tide.

It is not known who the dastards are but they are supposed to be fishermen. Evidently the seals interfere with their catch more or less, and it is understood they cut the nets of the fishermen. Be that as it may, the practice should be put to a stop to as the fishing industry in the neighborhood of the rocks is nil and the culprits evidently come from a distance to work their destruction.

There is some difference of opinion whether the seals have any protection away from a rookery, and steps were taken some time ago to make these rocks a bird refuge in order to keep the killers away, but up to the present time nothing has been accomplished along that line.

It has been suggested that a sharp lookout be kept and whenever a recurrence of these acts is discovered that a few well deposited shots from a long range rifle be scattered around the invaders as a reminder that there are others who can shoot for the seals’ protection as well as they can for their destruction.

We would not suggest or recommend an act against the laws of the land, but something must be done, and that soon, or the seals will be either exterminated or driven from their haunts. If it could be learned who the killers are it might not be a bad idea to invite them out in the byways and reason with them with a good hickory stick.

However, the seals are going to be protected, either by the government or by the citizens of San Clemente, and the dastards can put that in their pipes and smoke it. 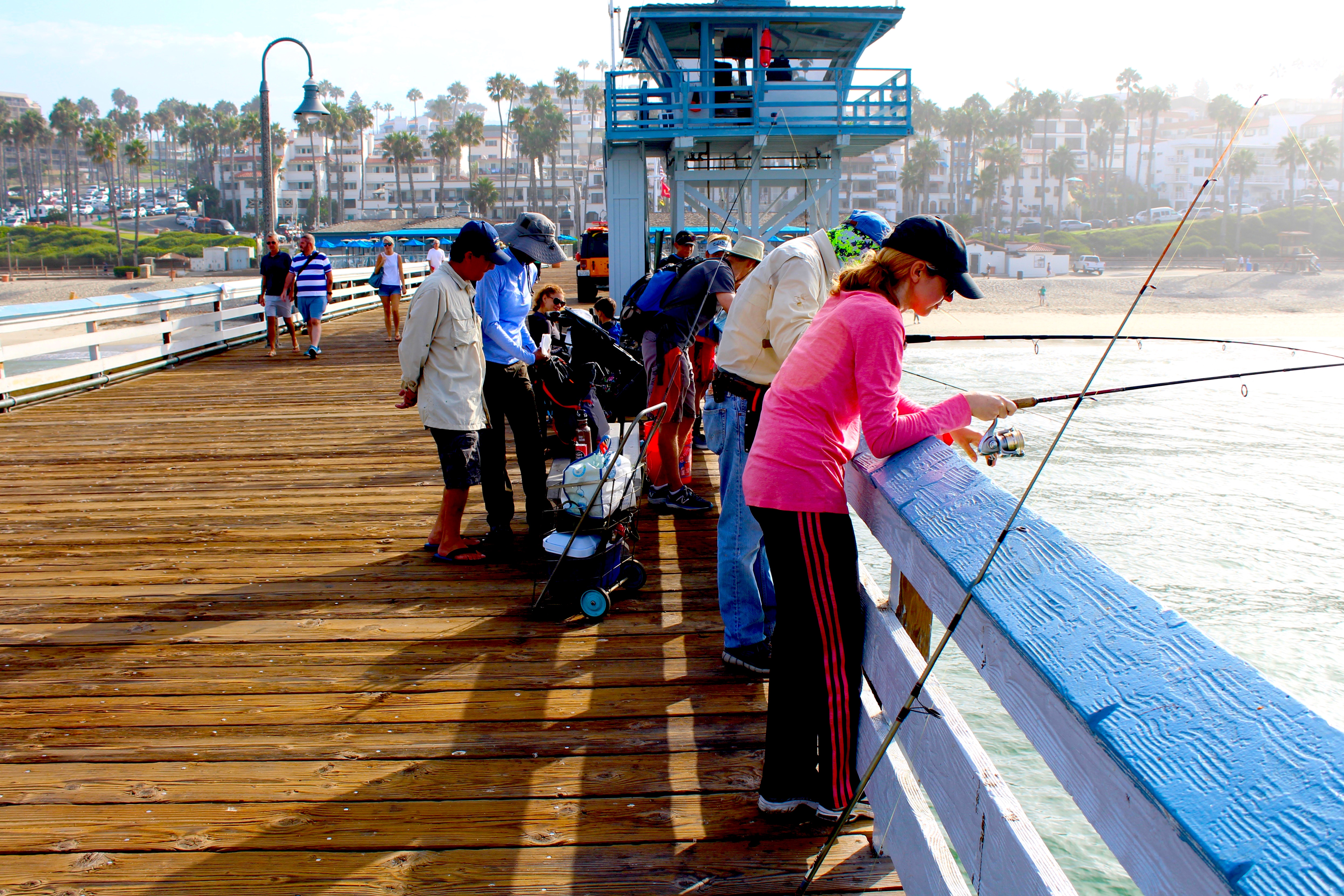 Anglers during a fishing class at the pier in August 2017

The City of San Clemente retained TM, Inc. Engineers to assess the structural condition of the Municipal Pier and the adjacent Marine Safety Building, and to design a dedicated pier fire line system. Of the three projects, as one of the precious jewels in San Clemente’s crown, one may wonder, “What’s the pier’s value to the community? Would we be better off without it?”…

What would San Clemente do without our pier? Pending a thorough physical examination — without medical insurance the structure is constantly beset upon by pounding waves, shifting sands, wind, rain, storm, wear, tear, and pedestrian traffic. Should we apply metal or wooden band-aids or tourniquets? Replace weakened parts to retain its health? Or should we put our 73-year-old surfer patient to rest? To the non-swimmer, the wheel chair occupant, the sunset lover, the confirmed fisherman, the stressed out executive, the Midwestern tourist, the board surfer, the seascape artist and the European visitor, the pier offers personal rewards. As well as to the lover about to propose marriage, the three-year-old child who’s never seen the ocean, the diners overlooking the churning white water and the resident of San Clemente. Its value is hard to measure. For recently retired Marine Safety Captain Lynn Hughes, an intimate friend of the pier, it’s one of the reasons 20,000 rescues have been made in the local ocean without a single loss during his 21-year tenure. The pier provides an elevated platform for lifeguard operations to oversee the entire beach and beyond. It’s a centralized location, a command post, a dispatch unit, a public address capability for warning swimmers of rip currents, every swimmer on our extended San Clemente beach can be watched.

To Heath McMahan, City associate civil engineer responsible for the pier, it’s a significant necessity. “The pier’s such a valuable commodity to the community, we want to make sure it’s evaluated correctly. We can preserve it and keep it going long enough so it’s not a near-future problem.” For Dennis Reed, Manager of Beaches and Parks Maintenance Department, responsible for the care of the pier, “it represents fear every time I hear a raindrop. I cringe a lot.” To Tshien Jan Ma, Principal of the local engineering firm responsible for pier inspection, who moved to San Clemente in 1985, it’s an act of affection. “As a resident, I can’t imagine not having that pier. It’s a big attraction to most tourists. We’re a laid back town. The pier is part of that. I can’t disassociate myself from it. Just walking on it is a great experience.” What is the value of the pier to you? …

In 1928, San Clemente’s pier was originally built at a cost of $75,000. That’s less than the current bid to inspect it and make recommendations for the cost and timing of its repair for the next ten years… The bottom-line, what’s the value of these structures to the village, especially the pier? Just think if we didn’t have one, we’d have to change the name of the Pier Bowl. Is that something we really want?

<*}}}}}}}}}>< —  For a period of time the bait shop out at the end had a mascot of sorts: Seemore the Pelican. He would sit there atop the bait shop until a fisherman caught a fish and then the question would begin, does the fish go in the cooler or up in the air? Many times the fish was thrown up in the air and Seemore always seemed ready to catch such offerings. But, for whatever reason, Seemore flew the coop in May of 1997 and hasn’t been seen since. Good thing since feeding pelicans is a really bad idea.

The first big-eyed thresher shark ever found in the Pacific Ocean was taken last Wednesday about a mile south of San Clemente Pier, the Department of Fish and Game reported today.

A male about 300 pounds in weight and 12 feet 4 inches in length, the big shark was captured by gill net in 85 fathoms of water by Gene Hachez, a commercial shark fisherman from Costa Mesa.

Hachez promptly notified the DFG’s marine resources office at Terminal Island about his unique catch and brought the shark in for identification and examination. It is now in a freezer awaiting transportation to the California Academy of Science in San Francisco.

Although most large sharks are found in both the major oceans, the big-eye thresher heretofore has been seen only in the Atlantic. The first one ever described was caught in 1840 near Madeira, an island off Portugal.

After an interval of a century, four others were taken between 1941 and 1950 off the coast of Cuba. Until last week there was no knowledge that this species of shark inhabited the Pacific Ocean.

The big-eyed thresher differs from the common thresher in the unusually large size of the eyes, indicative of the depths at which it lives, and considerably fewer teeth. Its tail is long, amounting to half the total length of the body. The largest big-eyed thresher on record was an 18-foot giant taken near Cuba.