Identification: Typical perch shape. Kelp perch have a compressed body, long pointed snout, long dorsal fin spines and coloring that is generally golden-brown to reddish above and tan below. There is usually a pale stripe on the upper side and sometimes blue spotting.

Habitat: Typically found in intertidal waters although recorded to a depth of 249 feet. Typically seen around offshore kelp beds but will move in around piers which have a heavy growth of kelp. Usually a kelp-canopy, dwelling species that likes to pick small invertebrates off of plants. 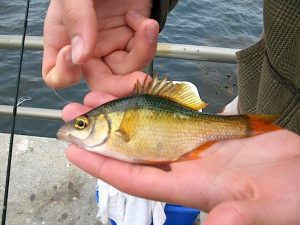 Kelp perch at the Cabrillo Mole in Avalon

Bait and Tackle: Use light tackle with small number 8 or 6 hooks and a small piece of bloodworm, shrimp or mussel.

Food Value: Too small and pretty so throw ’em back.

Comments: A “cleaner fish” that often picks ectoparasites off the bodies of larger fish. Sounds yucky!