Even as a writer there are some places you hesitate to write about, and this is one of those spots. The pier is small and more of a viewing structure to relax and watch the birds than a fishing pier. AND, it would only take a couple of careless, knucklehead anglers to screw it up for everybody! Pick up your trash and keep it clean.

Still, it is an option when the Elephant Rock Pier is crowded. Just be warned that although the cove looks really fishy, it yields up more skunks than fish. Nevertheless, one trait that most anglers have in common is hope, so anglers continue to visit the pier and those anglers do catch an occasional fish. 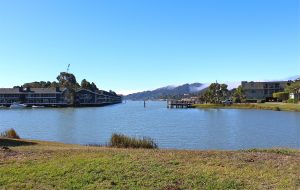 Two trips give a glimpse of action at the pier. My first trip to the pier took place in December 2010 when I first visited the pier with a trio of legends from the Pier Fishing In California fraternity—Redfish (Robert), Illcatchanything (Brian) and Big Rich (Rich). Brian mentioned that he had been able to have good success on sharks and rays, especially leopard sharks, but the tide was dropping and the shoreline was already turning into a mud flat when we arrived. Less than optimum conditions.

We headed down to the pier where we soon were joined by another PFIC regular SofaKing (Hans). The fiveof us fished for almost two hours with nary a nibble even though a variety of baits and rigs were used. I hadn’t been optimistic about success given the tides, and the time of year, and it turned out I was right, the fish were either absent (most likely) or simply not biting. It met the general definition of a skunk although we were able to exchange a lot of stories and had a good time fishing together once again.

Two years later Robert, Brian, and Rich joined me once again at the pier, this time in June.  This time the water was a little higher. As we walked on the small path out to the pier, Robert said “I think I see something.” He and Rich decided they would try a few casts from the spot while Brian and I headed on to the pier.

Robert started to toss out a Big Hammer lure while Rich tried some bait. Bam, something struck Robert’s lure, and after a spirited fight it turned out to be a shovelnose shark (guitarfish) about three feet in length. After playing it in and releasing it, Redfish cast out again. Soon he had another strike and a second shovelnose. This time the fish was a little bigger, measuring four feet in length. This time the fish would be kept for dinner.

What the normally SoCal fish were doing in this tiny cove on Richardson Bay is still open for conjecture (although they’ve been showing up in San Francisco Bay far more frequently the last decade or so). But what were the bottom hugging fish doing striking on plastics? I had never seen it down south but apparently these fish had other ideas. Who knows but shortly thereafter Robert and Rich joined us on the pier. 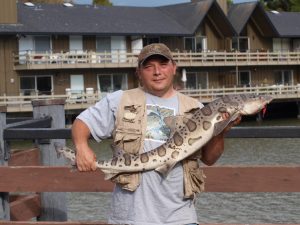 Brian Linebarger and a leopard shark from the pier

Brian once again sad he felt the pier and cove was good for leopard sharks so we rigged for sharks and tossed our baits out into the deeper-water channel in the middle of the inlet.

For about half an hour there was not a bite and then the clicker on Brian’s reel indicated a good strike. He struck the fish and at first it headed out into the channel but then it seemed to change its mind and was headed straight toward a large piling that sticks up in the water. Luckily, Brian got the fish turned before the line had a chance to rub on the piling and we began to think it was going to be easy. But no, it made another run, and almost made it into the piling once again before Brian turned it in toward the pier.  Soon after, Big Rich was heading down the rocks at the foot of the pier to grab the fish, a big and beautiful leopard shark. It would measure out at 51 ½ inches and 24 pounds and provide steaks for several meals. It was the only bite the four of us had on the pier.

Such is the nature of the pier and the cove, sort of hit and miss with the “fish-o-meter” arrow stuck on the miss side the majority of the time. However, the channel into the cove does, at times, seem to be a good conduit for fish into the cove. It’s typically at high tide, and typically a shark or ray, but it can be a good-sized fish 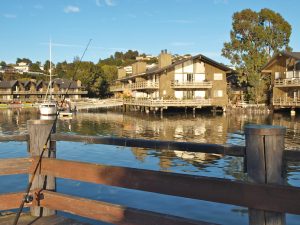 Environment. The pier is located in a fairly small cove and the shoreline adjoining the pier is heavily covered with vegetation, which may be suitable grounds for some smaller species of fish. I am told that sharks may spawn in the cove; schools have been seen with their backs basically sticking out of the shallow inshore waters.

Water at the pier is shallow and the shoreline is often basically a mud flat during low tide times but there’s a channel into the cove a short distance out from the pier that appears to be 15-20 feet deep. The bottom is mud with little to snag fishing lines. Concrete pilings are fairly sterile exhibiting only limited barnacle growth.

What I haven’t noticed in my visits is much problem from crabs on the bottom attacking the baits (which is a relief). 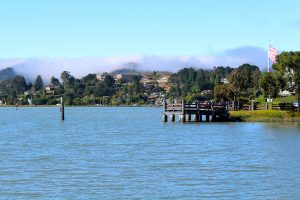 Although the pier itself is short, and somewhat small, it’s a beautiful structure in a beautiful setting. Looking southward from the cove into Richardson Bay reveals Aramburu Island, Harbor Point and Sausalito. Surrounding much of the cove itself are homes and condominiums with those opposite the pier being built out over the water. Kayaks and boats belonging to the lucky residents of those homes will be coming into and out of the cove on a regular basis. 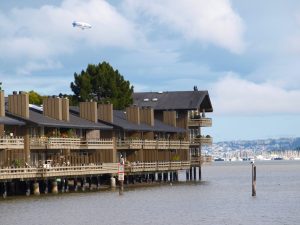 Fishing Tips. Although the cove would appear to be a good area for perch, few are seen. Ditto the jacksmelt that should swing into the cove during times of high tide. —but again few are seen.

What are seen, although not in big numbers are the sharays—leopard sharks, brown smoothhound sharks and bat rays. The key time for these is in early spring until late fall. Bait fished on the bottom should yield all three. 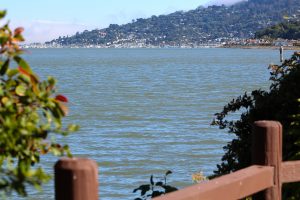 Sausalito off in the distance

For the sharks use a high/low leader rigged with size 2 to 2/0 hooks and a piece of an oily bait such as sardine or mackerel. An alternate method is to use a Carolina-type live bait leader with live bait, a midshipman, bullhead or shinerperch. Cut bait can also be used with the Carolina-rig.

Most of the bat rays will be taken on similar rigs but better bait for the batties is squid. 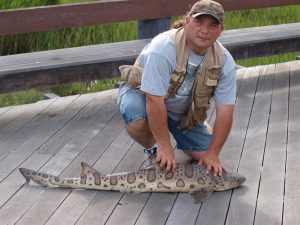 The Birds. The small cove and its shoreline area sees a tremendous number of birds that are worth watching when the fish aren’t biting. 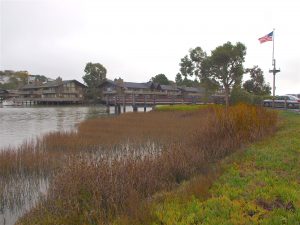 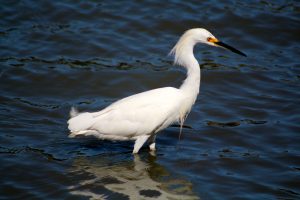 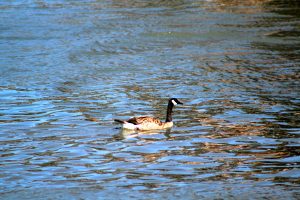 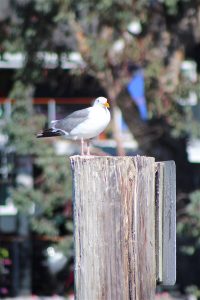 <*}}}}}}}}}>< — The old joke regarding old fisherman — they never die but just smell that way — just doesn’t seem too funny any longer. For ten years my fishing buddy Mike Granat accompanied me on my pier fishing trips up and down the coast. Sometimes he caught fish, sometimes he didn’t. But he always was there with ideas and support. In 2015, United Pier and Shore Anglers (UPSAC) began to co-host the kid’s fishing derby at the Marin Rod & Gun Club.  As president, I would make each derby and be busier than heck and Mike would be there helping right along in a plethora of way. But, we also liked to fish so  whenever we were in the area we would also try to hit several piers. This  small pier became one of them. It never was the best for fish but it’s peaceful and  it’s hard to beat for the sheer ambiance of the peaceful lagoon and surroundings. I told Mike that when the fish weren’t biting this pier was still good for the soul — and I’m hoping his soul is up there looking down whenever I pay a visit to the pier. 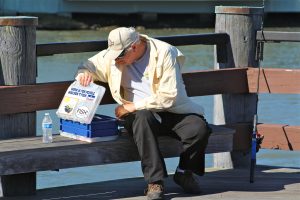 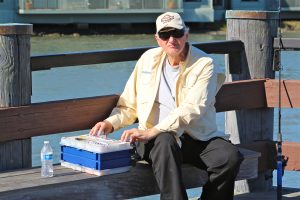 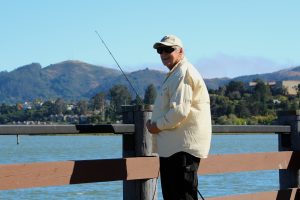 <*}}}}}}}}}>< — This is Marin County and Tiburon, which means it is some of the most expensive real estate in California. The cove is surrounded by condominiums that the last time I looked averaged about $1.4 million each. I did see a few condominiums that could be rented starting at about $3,500-4,000 a month. Both figures are outside my price range. It’s a nice area, a clean area, and people expect it to stay that way. Keep it clean!

Facilities: Basically none with the exception of benches on the pier.

Handicapped Facilities: There are a few handicapped parking spaces adjacent to the pier. The surface of the pier is wood concrete and the railing is approximately 40 inches high.

How To Get There: From Hwy.101 take the main Tiburon exit, Tiburon Boulevard, and go east. Turn right at Greenwood Cove Drive. Opposite the gas station you will see Greenwood Bay Drive. You can walk or drive the short distance to the pier. There is parking adjacent to the gas station, a couple of parking spaces out by the pier.