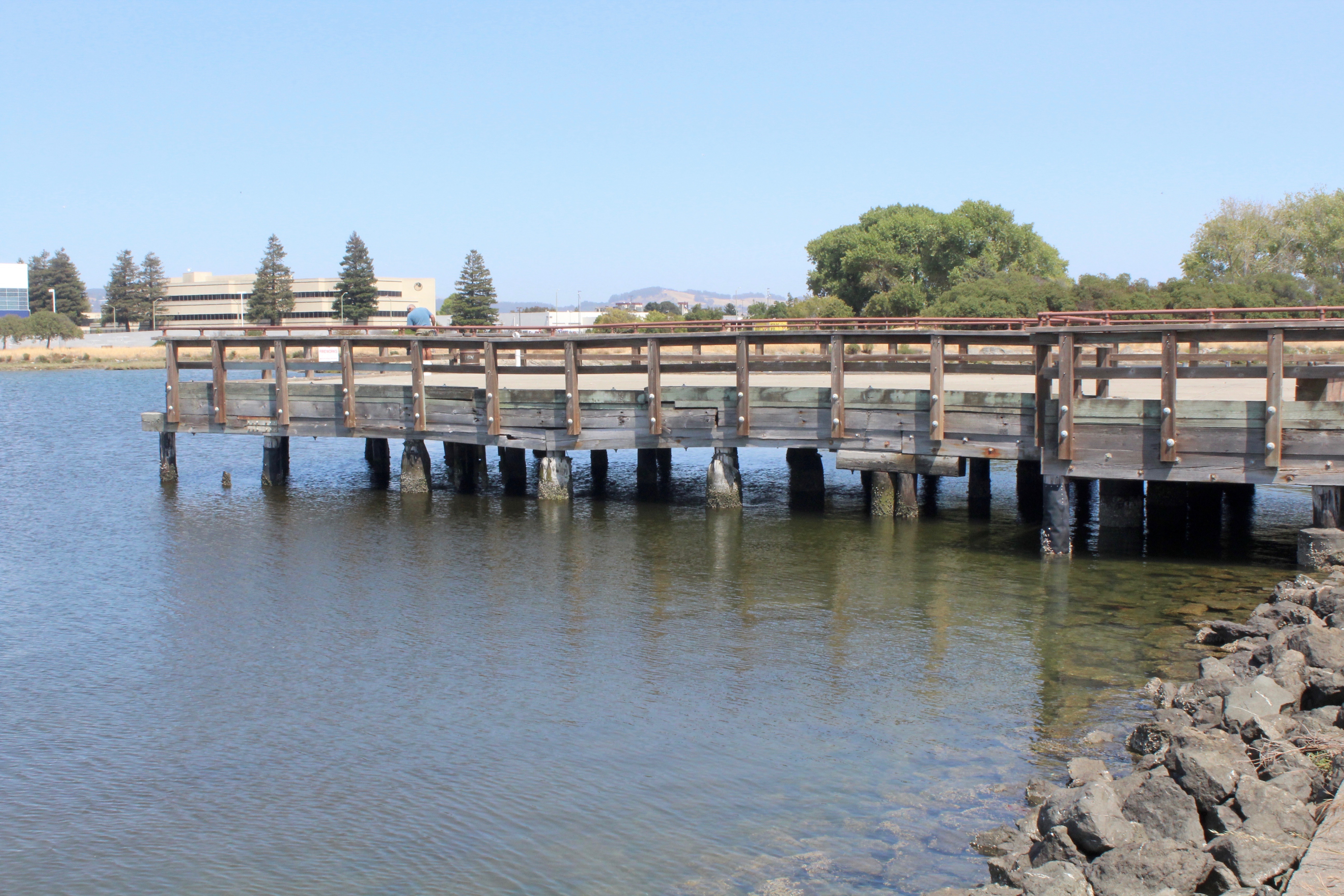 A for effort and F for execution. That was my thought as I watched an angler trying to use a cast net at this pier, one of the two piers located in the Martin Luther King Jr. Regional Shoreline area, this pier and the main Arrowhead Marsh Pier (see separate article).

We could see some type of small baitfish in the murky waters next to the pier but drop after drop with the net failed to  produce a single fish. An A and a F should average out a C but it looked like as far as actually getting fish he was headed for a F on the day. But no problem, I’m sure with some practice he would get the hang of the net and I told him so. Instead we had a nice talk discussing fishing at the pier (of which he knew very little) and home prices in the Bay Area versus Fresno (of which there were huge differences). Given the great weather and beautiful surrounding it was still a nice visit. 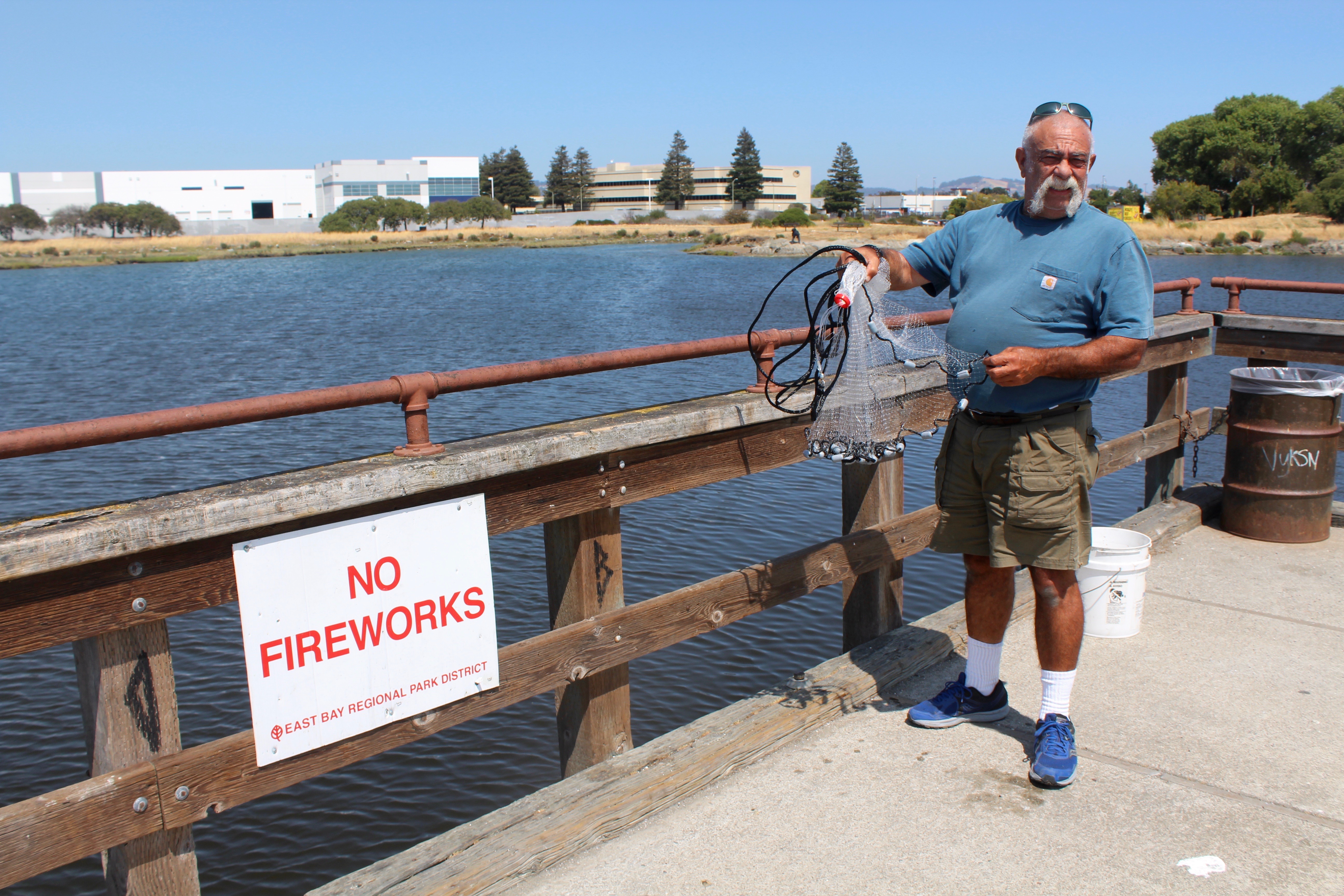 I think that reflects many visits to the pier since fishing at the small pier is often slow. Still, the old saying, “a bad day fishing beats a good day working” still rings true. Right?

Environment. I’m not sure the official name but every angler I’ve met at the pier simply calls it the Doolittle Pier (since it sits on Doolittle Drive).  The pier is small, only 73 feet long, and sits near the shallow end of the Airport Channel, a long and narrow channel that connects with San Leandro Bay to the north. Across the channel from the pier is the Arrowhead Marsh Meadows section of the Martin Luther King Jr. Regional Shoreline.

This pier has extensive barnacle growth on the pilings, has considerable rocks along the shoreline, and has a number of pilings off to the right of the pier. In addition, it presents fair water depth within a short cast. 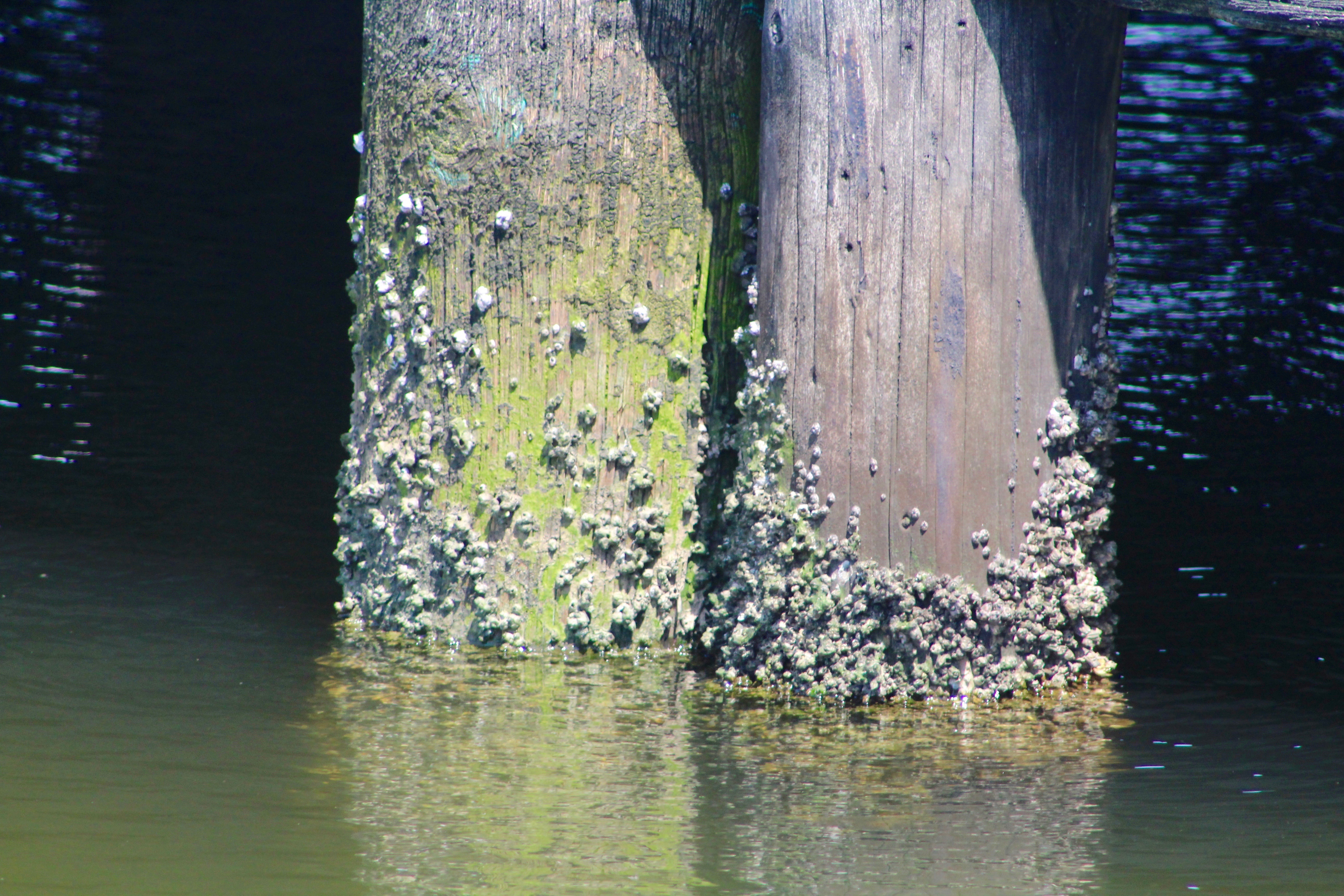 Nevertheless, the fishing rarely achieves the expectations at this pier. For whatever reason it’s generally slow although seasonal catches can produce a variety of fish and sometimes the stripers will come in to attack the baitfish that seem to hang around the pier. Be there when the stripers show up and you might receive a pleasant surprise.

Basically the pier offers up the same species as its companion pier, the Arrowhead Marsh Pier.

Local anglers tell me they have seen a few white sturgeon landed but I personally haven’t seen any so far and would be somewhat surprised given the shallow waters encountered at the piers.

As for the non-fishing environment, a quick glance to the east past the water and marsh reveals the nearby Oakland Coliseum and Oracle Arena. 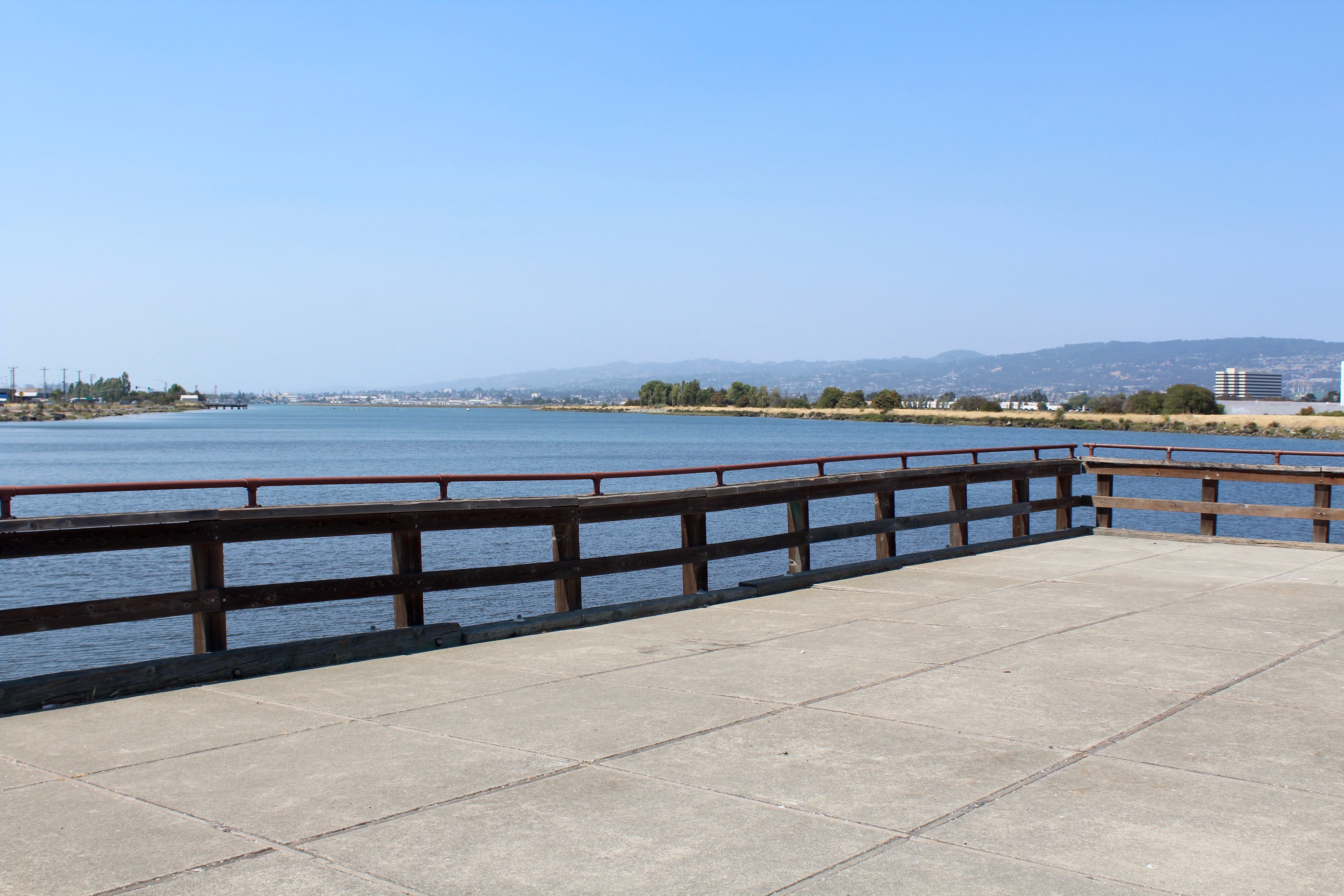 Fishing Tips. Remember the seasons when you are fishing Bay Area piers! In the winter and spring try for flounder and/or perch; use pile worms, grass shrimp, ghost shrimp, clams or market shrimp, and fish on the bottom using fairly small hooks.

The winter and spring can see a variety of the larger perch, while summertime sometimes yields up the smaller walleye and silver surfperch, and all 12 months seems to yield up the irritating shinerperch that like to steal bait intended for their larger brethren.  Do remember the perch closure from April 1 to the end of July although you can still catch the shiners and they can be good bait for the stripers and halibut,

White croaker will be one of the most commonly caught fish but jacksmelt numbers may also be high when a school moves through the area. The white croaker (kingfish) are normally caught on small pieces of anchovy or squid on the bottom while jacksmelt can be caught on a multi-hook leader (3-hook maximum) fished with a float and small pieces of pile worms. 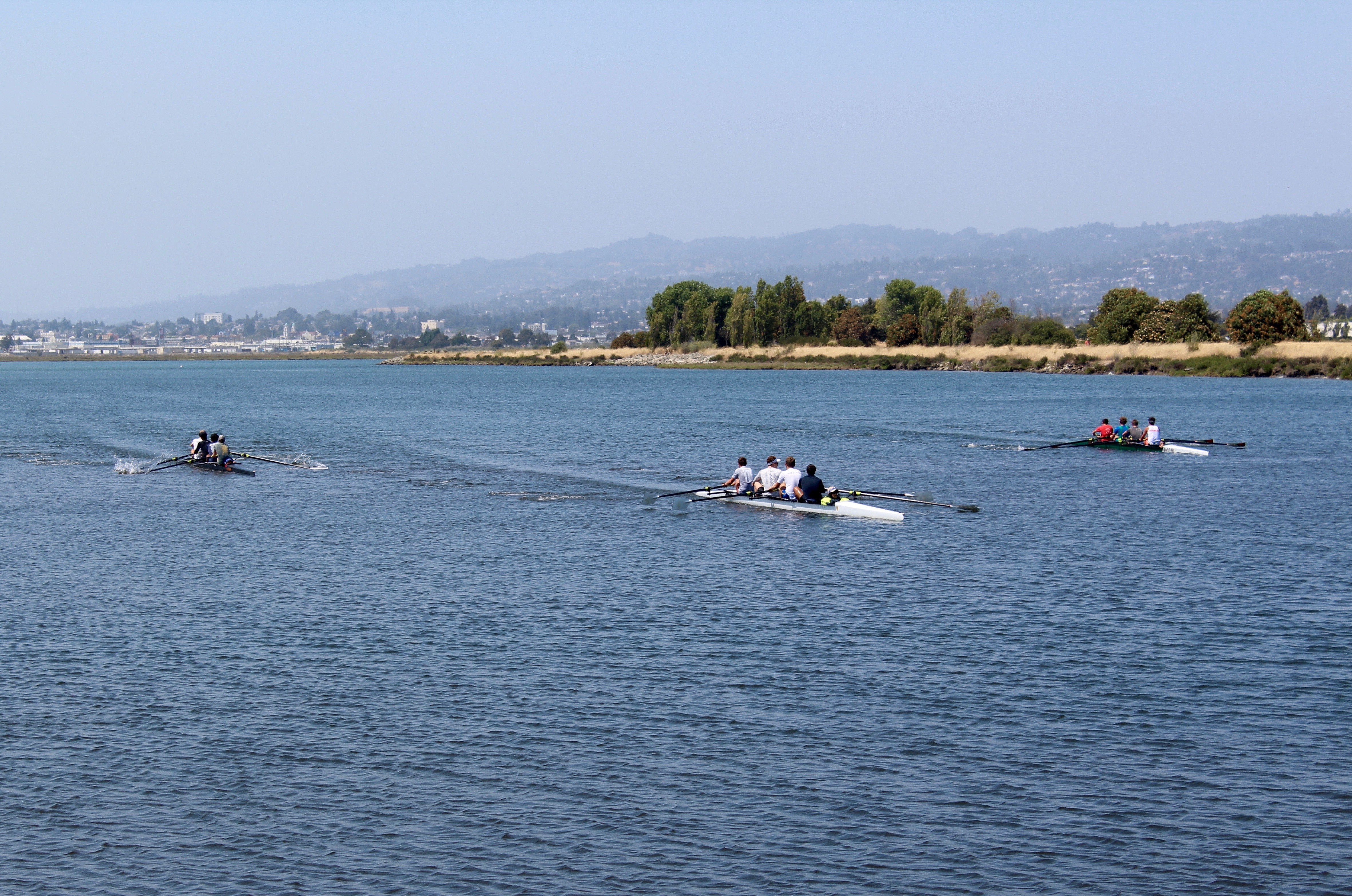 You may find yourself sharing the water with various rowing clubs.

For many anglers, summertime represents the prime time for sharks, rays, stripers and an infrequent halibut.

The sharks like an oily piece of sardine or anchovy for dinner (or a bloody mackerel) while the bat rays prefer a little calamari, also known as squid.

The halibut are a little more Epicurean; they prefer live bait such as a small shiner or smelt.

Striped bass are the main prize at the pier and can be taken on both bait and artificial lures. The bass often prefer a live bullhead or mudsucker (longjaw goby) but some locals swear there is nothing like a dead bullhead all covered with bullhead slime. Cut bait (anchovies and sardines) also will attract the linesides. However, given the pier’s size and closeness to the water, plugging for bass is very popular (almost like fishing from the nearby shore areas). A plethora of lures, everything fro soft baits to Hair Raisers to spoons and jerk baits will work when the stripers are cooperating.

Like most local waters and the fish found therein, they can carry toxins in their bodies so it’s best to (1) not eat them or (2) eat them in moderation. 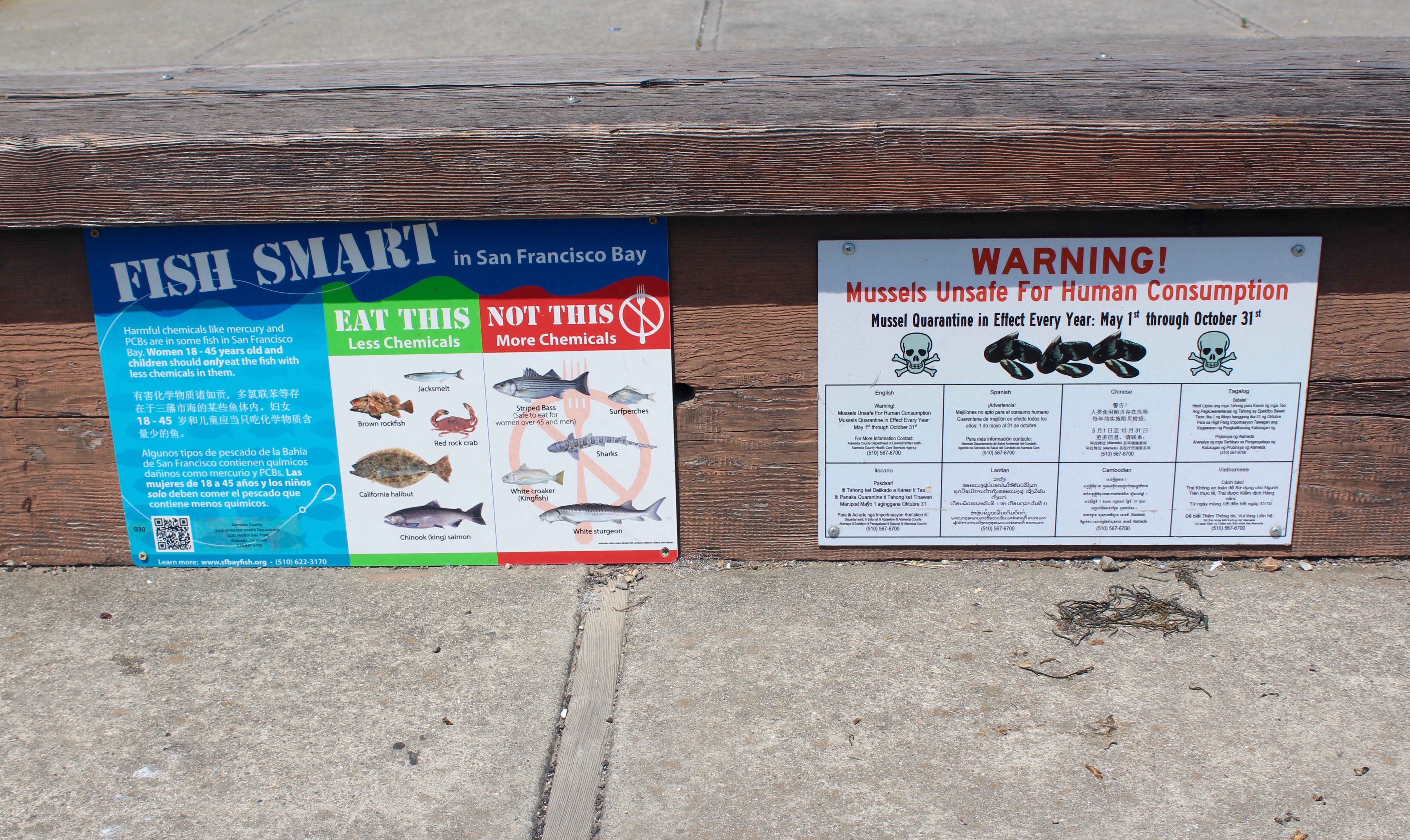 Special Recommendation. At times park rangers have targeted anglers without a fishing license. They are wrong and any tickets should be contested.

I was driving by Doolittle yesterday and saw some baitfish breaking the surface, decided to check it out. Plugged from the Doolittle Pier for nothing. Water is very dark, did see a bunch of small baitfish. Top of the incoming. I’ve talked to a few people who say stripers do come in there chasing the bait, but I’ve never caught or seen anybody catch any out there.

That pier is usually dead. When the sardines and macks come in, it’s a good spot to Sabiki for them.

I know a couple old guys that swear by this place, though in all the times I’ve thrown there, I haven’t had not even one follow.

<*}}}}}}}}}>< — Given its proximity to the Oakland International Airport (at the end of Hegenberger Road) the area has several links to aeronautics. One is Doolittle Drive, the road next to the pier. It is named after James H. Doolittle a pioneering pilot, aeronautical engineer, and combat leader whose career stretched from World War I to the Cold War. He was born in Alameda and is most famous for leading the daring bombing raid over Tokyo in 1942, the first attack on the Japanese mainland in WW II.

A short distance up the road toward Alameda sits the Oakland Aviation Museum. It houses an extensive aircraft collection and a variety of aviation exhibits in an old time hanger. If you care for the subject and don’t mind spending a few bucks, the museum is interesting and worth a visit. 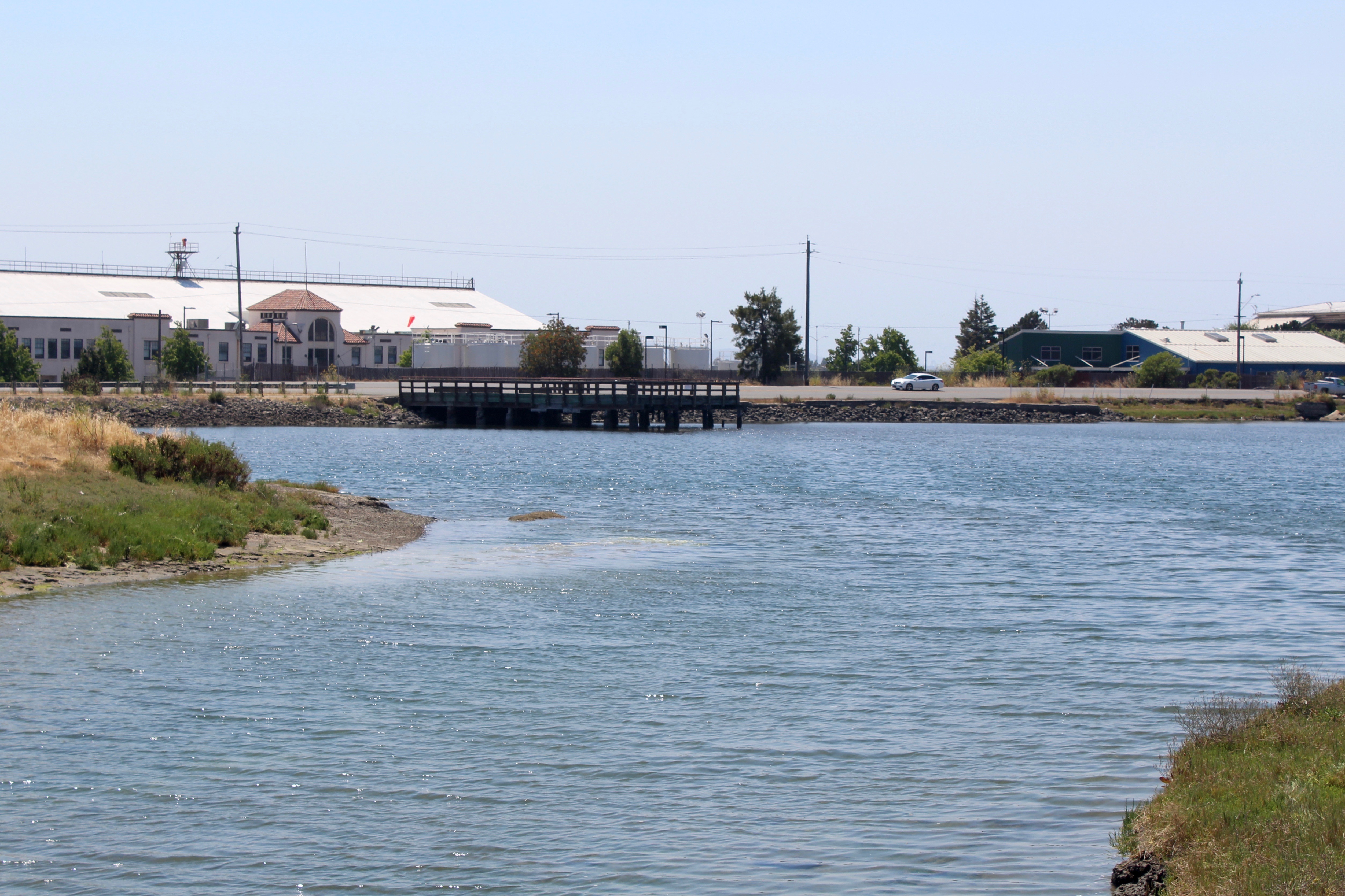 <*}}}}}}}}}>< — If you continue north up Doolittle Drive toward Alameda you’ll see a strange sight—Watermelon Rock. A simple slab of concrete, the concrete was first painted orange in May of 1983 to look like an orange slice. Then, a few years later, someone painted it red and green to resemble a slice of watermelon. Complaints led the park to paint it black but people kept showing up to paint it, first as a lemon, then as an orange wedge, and eventually back to a slice of watermelon. It’s stayed as “Watermelon Rock” ever since. 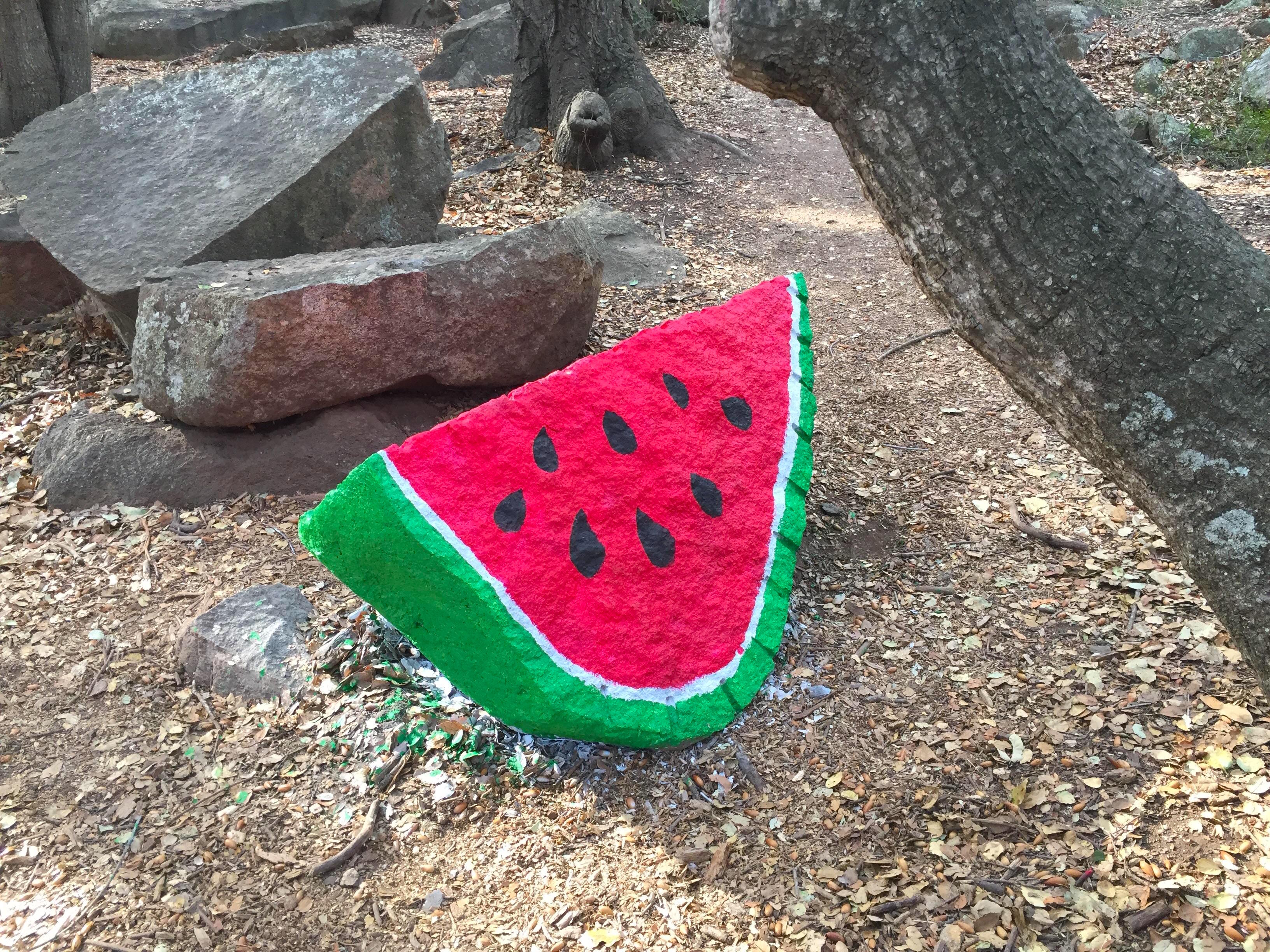 Hours: The park is officially open 8 A.M. to 10 P.M. but the small pier sits by itself on Doolittle Drive and is basically open to anglers 24 hours a day.

Facilities: The only facility at the pier is free parking. Restrooms, picnic tables, BBQ’s, and large grassy areas are located in the park near the Arrowhead Marsh Pier. There are several restaurants and motels located just a few blocks away on Hegenberger Road.

Handicapped Facilities: There are handicapped restrooms near the Arrowhead Marsh Pier and most trails are paved. Both piers have wooden railings approximately 44″ high.

How To Get There: Take I880 to Hegenberger Road and go west toward the airport. Turn right on Doolittle Drive and just a short ways past Swan Way (and the southern entrance to the park) you will see the small pier jutting out into the bay. Limited parking is available on both sides of the pier.