Species: Sebastes caurinus (Richardson, 1844); from the Greek word sebastes (magnificent). and the Latin word caurinus (northwest wind), a reference to the first specimens being taken in the northwest off of Sitka, Alaska.

Identification: A deep-bodied rockfish. Colors range from dark brown or olive to pink or orange-red above with patches of copper-pink and sometimes yellow. Their bellies are whitish. Two copper-orange bars radiate backward from their eyes and their cheeks are sometimes yellowish. They also often have a pale stripe running along the rear two-thirds of the lateral line; the line is found in all color variations. Their fins are mostly coppery and often dark. Because of their variable colorations, coppers were at times considered to be two to three distinct species with whitebelly rockfish being the most common. 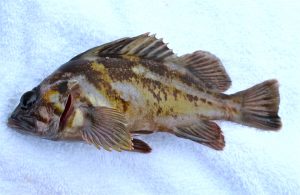 Habitat: Younger fish are typically found around pilings and jetties. Juveniles are found in loose aggregations around piers and wharves in bays. In southern California, adults are typically found in deep waters. In more northern waters adult coppers primarily live in shallow, protected bays and inlets among rocks or kelp beds. Though most hang out at a 90-foot depth, they’ve been  recorded down to 1,338 feet. Adults most commonly feed close to the bottom with crustaceans being the main basis of their diet—shrimp and several different crabs including Cancer sp., and kelp crab. Squid and octopi are also important food species while a wide variety of bottom fish are also eaten, especially cusk-eels, eelpouts, sculpins and young-of-the-year rockfishes. Morning and evening hours are the prime dining times. Once settled, adult copper rockfish rarely move more than a mile form their home.

Piers: I’ve only taken these from six California piers—Port San Luis Pier, South T-Pier at Morro Bay, Monterey Wharf #2, Santa Cruz Wharf, Commercial St. Dock in Eureka, and Citizens Dock in Crescent City (by far the best spot), but they are also recorded from the Monterey Coast Guard Pier. Coppers are the most common rockfish caught from piers/wharves in Washington and British Columbia. I caught one from a wharf in the harbor at Victoria, British Columbia, several at the Mukilteo Pier in northern Washington, and two at Seattle’s Pier 57.

Shoreline: An infrequent catch by anglers fishing from jetties or rocky areas.

Boats: A frequent catch by “rockcod” anglers fishing in central and northern California.

Bait and Tackle: Most copper rockfish caught by pier anglers are young fish hooked while the anglers are fishing around the pilings for perch or other bottom fish. Most are landed on high/low leaders using small hooks although some will be landed on bait rigs (Sabiki) being used for smelt, herring or anchovies.

Food Value: A good quality fish with mild flavor, firm texture, small flakes and low fat content. The flesh is tasty and can be prepared many ways.

Comments: Coppers reach at least 55 years in age with most of the largest fish being females. Maturity (reproductive age) is reached by some at 12.1 inches and 5 years, most at 13.3 inches and 6 years, all by 16 inches and 8 years. One female may release hundreds of thousands of tiny live young in April and May. The young must take their chances in the plankton and very few live to be adults. According to the California Fish and Game—“There has been no formal stock assessment of this species in California. However, there is compelling evidence that copper rockfish populations have severely declined in many areas, and large individuals are noticeably less common than in past decades.”