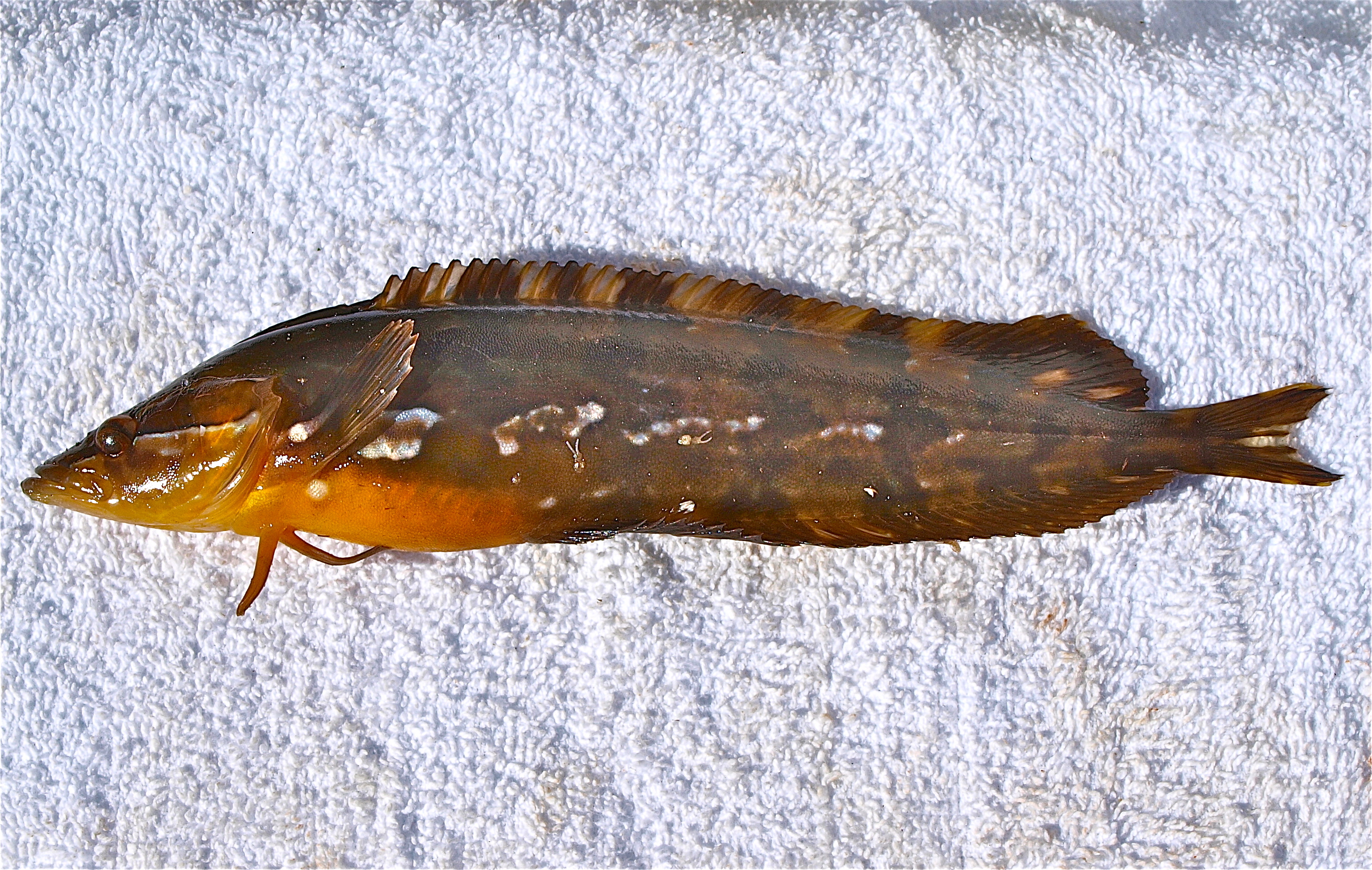 <*}}}}}}}}}>< — In the DF&G Fish Bulletin 130, Miller and Gotshell reported that the pier was the farthest north location where queenfish, Seriphus politus, were recorded during their Oregon to Point Arguello survey, with “several taken in 1963 at Capitola pier.” 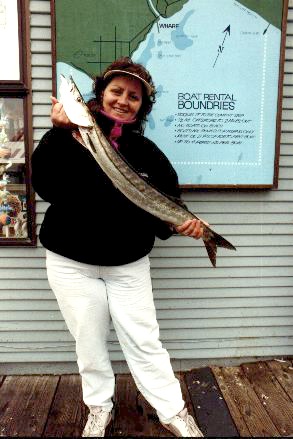 <*}}}}}}}}}>< — Although the pier is not a noted place to catch sharks, quite a few nice-sized Selachians have been taken over the years. I’ve never heard of a salmon shark being taken from the wharf but apparently they are in these waters.

Nearly a dozen dead juvenile salmon sharks, disoriented by brain infections and often mistaken for baby great whites, have washed up along Central Coast shores in the past month. And it’s not the first time, although it’s the greatest number in recent memory, researchers say…

Every summer for the past decade, dead baby salmon sharks have inexplicably beached themselves, an uncommon occurrence because sharks tend to sink to the bottom of the ocean when they die.

Necropsies conducted at Stanford University and Long Marine Lab at UC Santa Cruz have shown that most of the salmon sharks had bacteria-induced brain infections at the time of their deaths, but shark experts still don’t know the source of the bacteria.

Even more baffling are the salmon sharks themselves, which are rarely spotted alive in the waters of the Central Coast but whose numbers are legion in the Gulf of Alaska – so much so that they’ve been referred to as the “poor man’s marlin” among fishermen whose livelihoods hinge on catching them.

“There’s a mystery in the Monterey Bay and the mystery is that something that looks like a baby white shark dies on our shores every year,” said Dave Casper, a veterinarian with Long Marine Lab at UC Santa Cruz. “And yet we never catch live salmon sharks in the bay. But we know they have to be there if they’re washing up on our shores.”… The deep waters off the Central Coast serve as an annual “pupping grounds” for the adult female sharks, who each year migrate from as far north as Prince William Sound in Alaska to as far south as Southern California waters, said Sean Van Sommeran, executive director of the Santa Cruz-based Pelagic Shark Research Foundation.

Van Sommeran and his foundation have been busy lately, collecting the vast majority of dead sharks after they’ve been discovered, whether near the Capitola Wharf, as was the case a few weeks ago, or just outside Half Moon Bay, the most recent find two days ago. 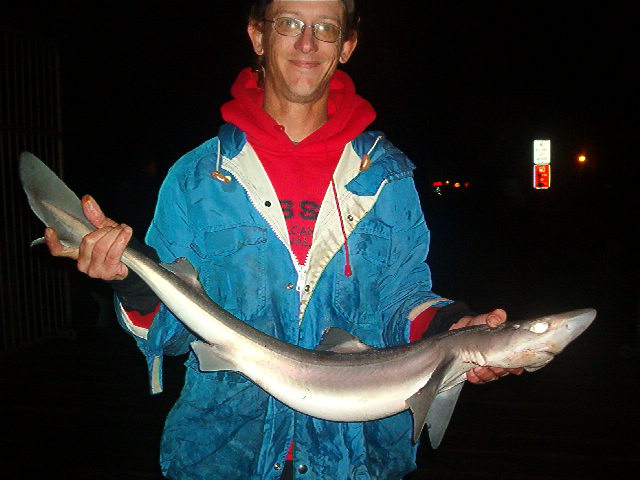 <*}}}}}}}}}>< — Every summer the shearwaters (Sooty, Short-tailed, Pink-footed, and Buller’s) descend on the waters of Monterey Bay, especially the waters between Santa Cruz, Capitola and Seacliff. It’s part of their annual trip that takes them from Australia, New Zealand and Tasmania up to Japan and Asia, across to Alaska and down the coast to California before heading back across the ocean. Their numbers have been estimated to reach two million in the local waters and their behavior led to the creation of a fairly famous movie. Several decades ago they seemed to drop out of the sky on Capitola, a story reported by the Santa Cruz Sentinel. Alfred Hitchcock, who vacationed in Santa Cruz, saw the story and sent a clipping to Hollywood where it was turned into the script for a movie—The Birds. 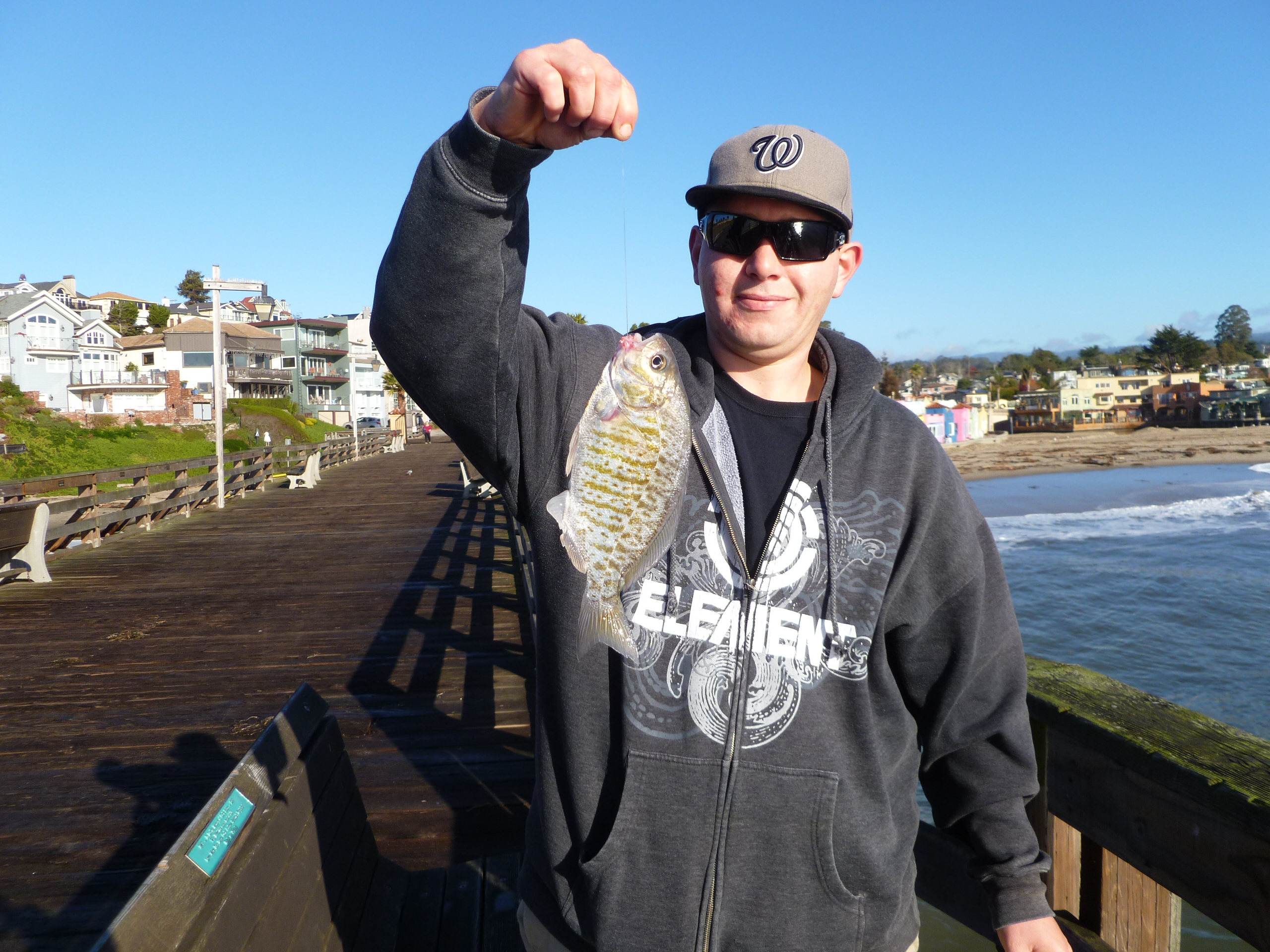 <*}}}}}}}}}>< — Like many beach towns in California, parking in Capitola, especially in the small area near the beach, is almost always gnarly. During the summer tourist season, and/or weekends, it can not only be  gnarly but nightmarish. There is metered parking on the streets but it is limited to two hours and gone quickly. City parking lots are available but they’re expensive. That’s why the city runs shuttle buses from more distant parking lots to the beach most weekends.

The best way to alleviate this problem is to arrive early in the day when the pier is first opening up. Generally there will be some parking spaces available up the hill on Cliff Drive (a fairly short walk to the wharf). The spaces are also metered but provide longer times for parking. However, later in the day even those spaces may be gone. Fish early or fish late (although the restaurants and bars stay open late so even evening hours may be crowded). Nevertheless, anglers do find parking, do find their way to the pier, and they do catch fish.

However, there is one time you probably should just forget visiting the wharf. That time is during the annual “Wharf to Wharf Race” that starts at the Santa Cruz Wharf and winds up at the Capitola Wharf. It is held on the fourth Sunday in July and “limited” to 15,000 runners. The race, started in 1973, is one of the biggest local events and a lot of fun but simply clogs the entire infrastructure around Capitola’s Wharf. I guess you could come “really, really early” and stay “really, really late” but for myself, I’ll pick a day when the road is less traveled. 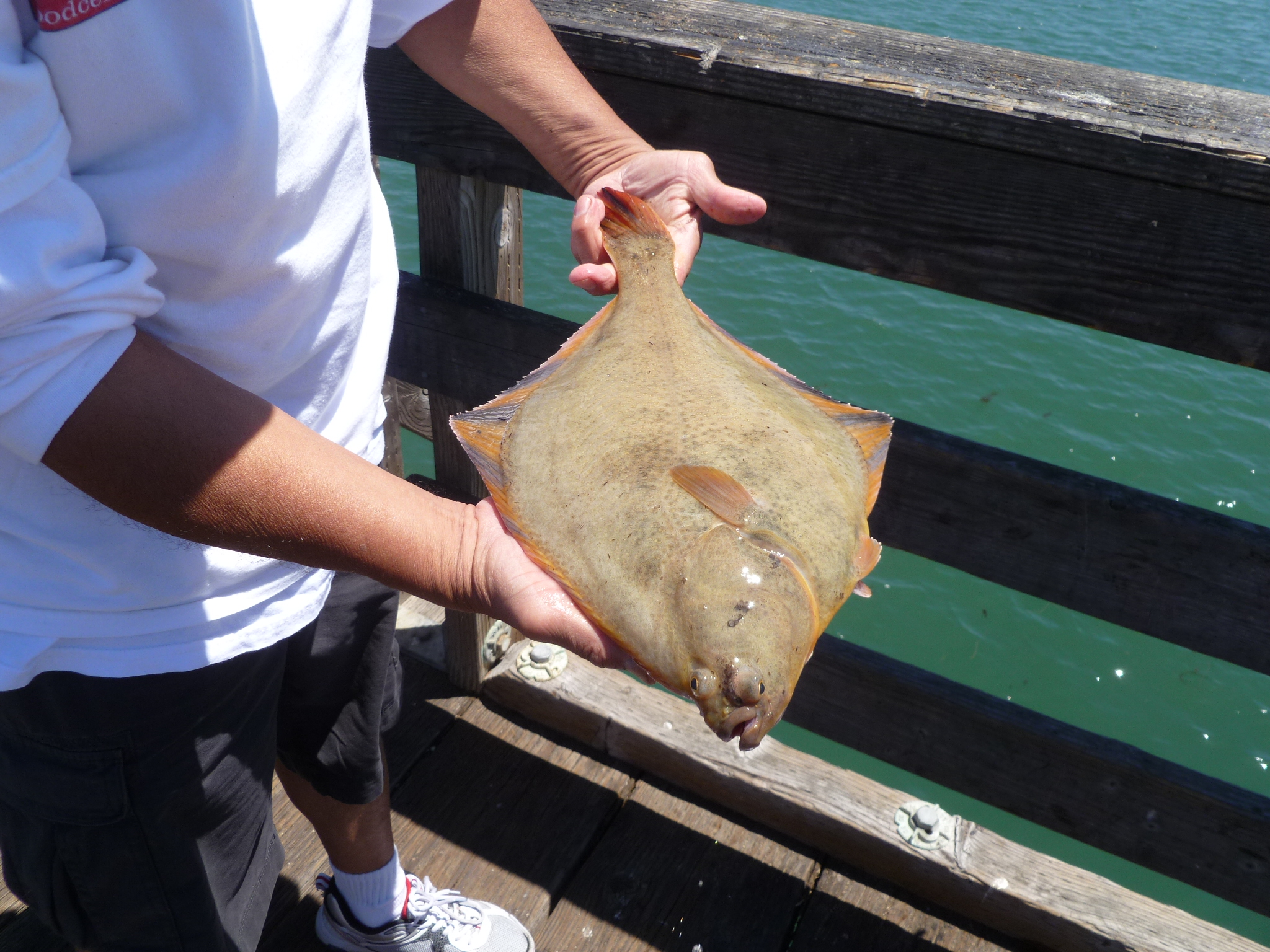 <*}}}}}}}}}>< — You never know what you’re going to see on piers and an October visit in 2013 proved that thought true. My friend Hashem and I were fishing out at the end of the wharf when a group of about ten people, some adults and some youngsters, showed up hauling a big wooden ramp out to the end. Luckily no one was in the exact spot where they wanted the ramp to sit or there might have been a problem. Their goal as it turned out was to bicycle off the ramp and into the sea. The fact that the activity might not exactly be good for the fishermen, and there were several people fishing, did not seem to be a concern. A crowd gathered, divers went into the water, and people readied their cameras. We never saw the conclusion because we were scheduled to be in Santa Cruz and had to leave. Was it a commercial for a shop, something for YouTube, or just an exercise for the group? We never found out nor did we find out if they had a permit to take over the end of the pier for their plunge. 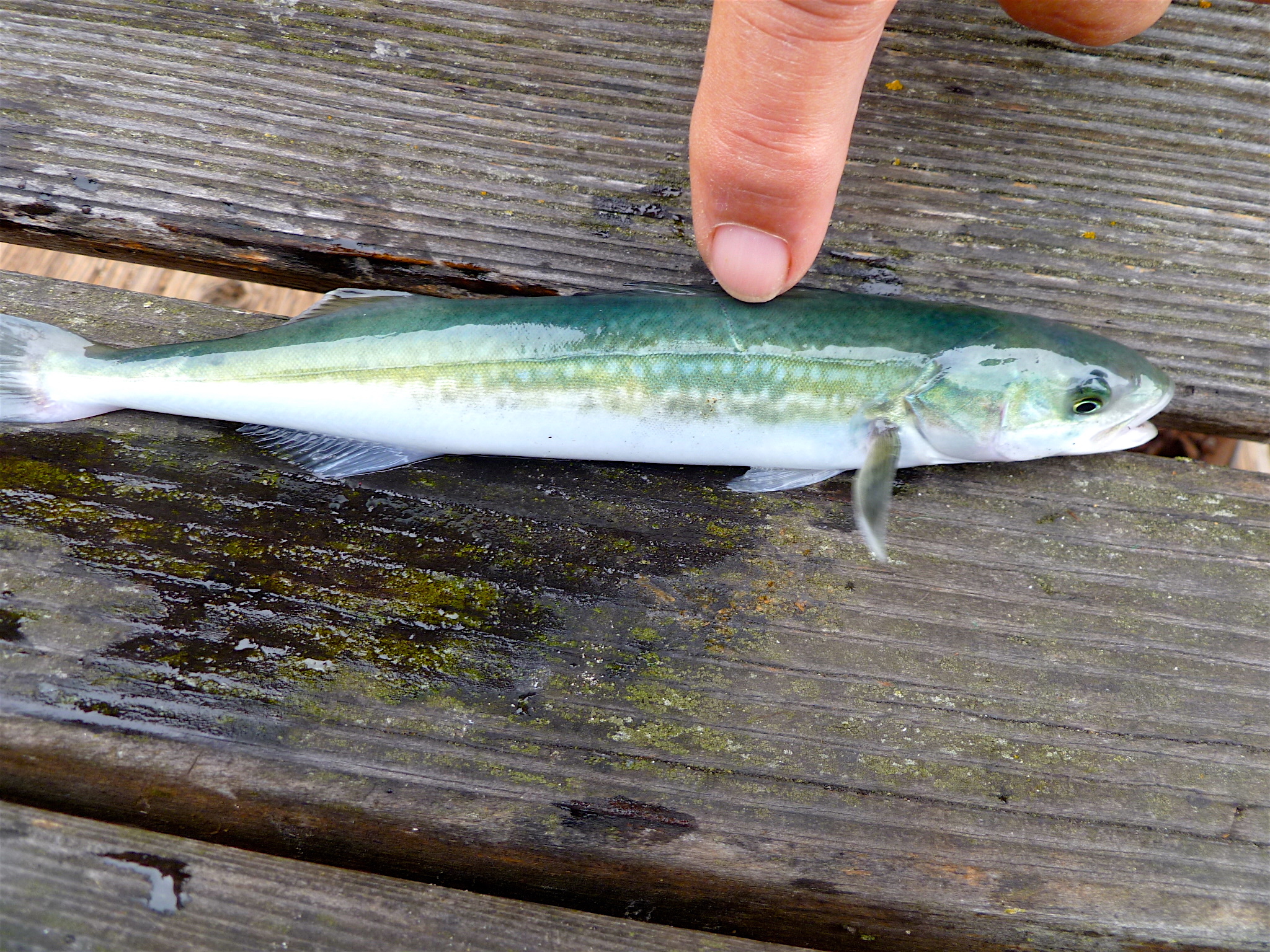 History Note. The name Capitola is Spanish for capital and was apparently first used by F.H. Hihn of Santa Cruz when he laid out a new resort in the area in 1869. The good residents of Soquel had offered to let the State of California establish its capital in the upstairs rooms of Ned Porter’s local store but California politicians (wisely) declined the offer. Hihn used that information when he named the site; it had been called La Playa de Soquel, the beach of Soquel, during Mexican rule, and Soquel Landing under American rule.

Apparently Soquel Landing had a small pier prior to 1857 but Hihn and the Pacific Coast Steamship Company started a new wharf that year. In 1860, it was lengthened to 1,100 feet (some reports say it was lengthened to 1,200 feet in 1863) but a storm in November of 1865 destroyed the outer 500 feet of the wharf and made the inshore part of the pier unsafe. The steamship company soon rebuilt the pier. The beach itself became a favorite of vacationers from San Francisco, brought initially by horse-drawn vehicles, and then, after 1876, by the Santa Cruz-Watsonville narrow gauge railroad whose depot sat on Soquel Landing road, a short distance up the road from the wharf. However, the railroads began to take business away from the shipping line and the wharf was abandoned in 1879.

Soquel—Located on the bank of Arroyo Soquel, four miles east of Santa Cruz and one mile north of Capitola. It is therefore one mile from the bay or Soquel Cove. The name is that of an Indian village. The area about the mouth of Soquel Creek (where Capitola now is located) was formerly known as Soquel… A surveyor’s map of the place in 1858 shows a wharf on the bay, a dam in the stream and a millsite, which became in succession a flour mill, a sawmill, a paper mill and a tannery… By 1888 there were 10 fishing boats operating out of this place which ranked second as a fishing port of Santa Cruz County. By this time the Southern Pacific railroad had been built and Soquel was a favorite spot for rail shipments of fish. Modern maps show the railroad passing through Capitola, not through Soquel.

As mentioned, the pier has been damaged many times. In fact, I have a picture, dated 1913, which shows the wharf split in half (as a result of a 1912 storm); the picture is remarkably similar to one I took in the mid-’80s following the storm of 1983. In 1998 the wharf was closed for about a month following winter storms. The next year saw more than $1 million in renovations and a closure that lasted several months; it officially reopened for the July 4, 1999 weekend. However, the wharf was closed again for repairs in February-March of 2000. 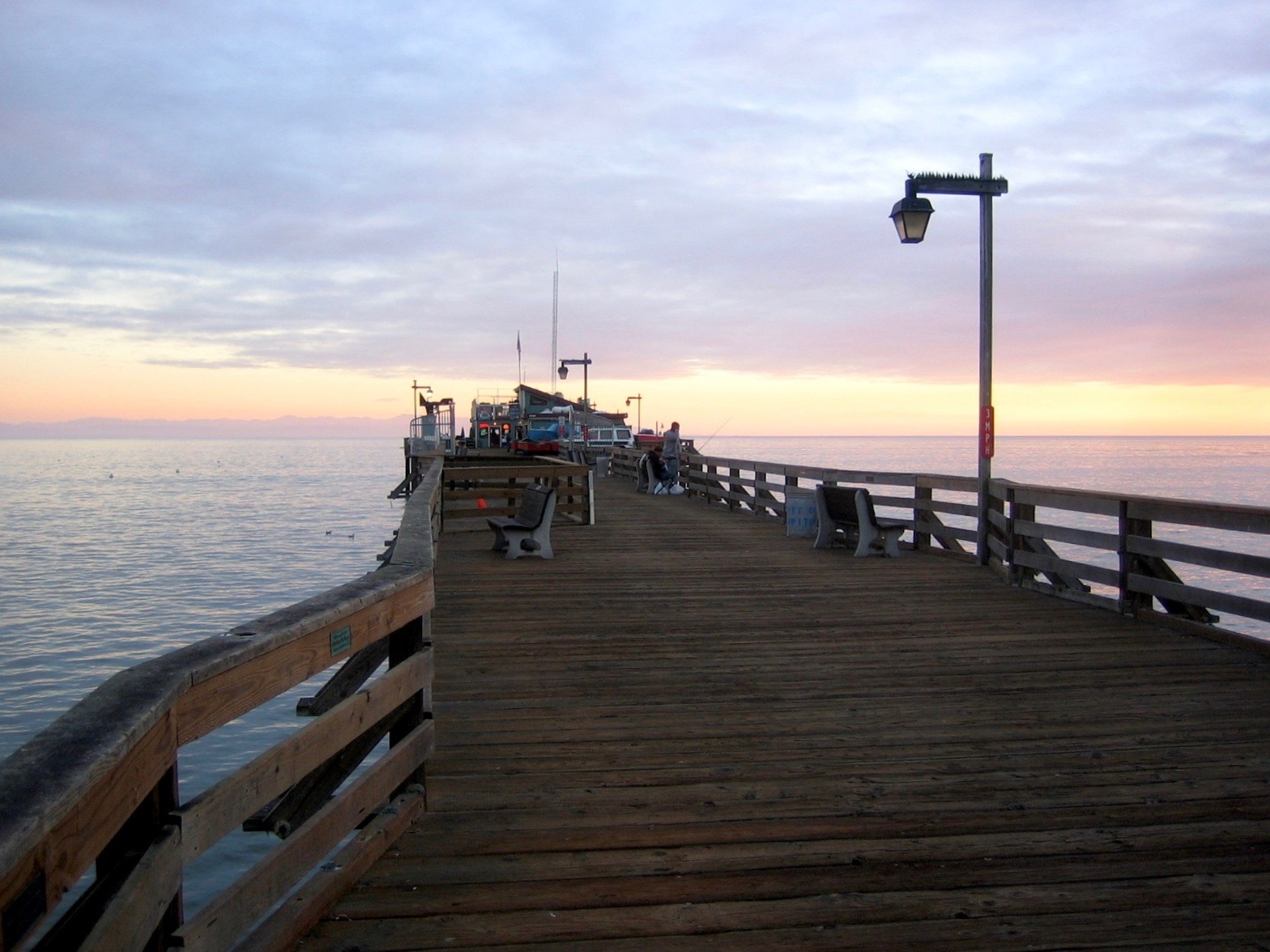 Facilities: Fish cleaning stations, restrooms, benches, lights, the Wharf House Restaurant and the Capitola Boat and Bait Shop are located on the pier. Parking can be found just up the hill on East Cliff Drive (it’s where I usually park), on Prospect Drive (above the railroad tracks and stairs), and on side streets north of Capitola Road (near the Shadowbrook Restaurant). Limited metered parking is available on the streets in Capitola Village, at a cost of 50 cents an hour but with a two-hour maximum visit. There are two motels near the entrance of the pier and several additional establishments nearby in Capitola Village.

Handicapped Facilities: Handicapped parking and restrooms are available. The surface of the pier is wooden planks and the height of railings is approximately 38 inches. Not posted for handicapped.

How To Get There: From Highway 1 take the Bay Avenue exit west until it hits Capitola Avenue where you turn right; stay on this to Cliff Drive, turn right and park wherever you can find a spot.