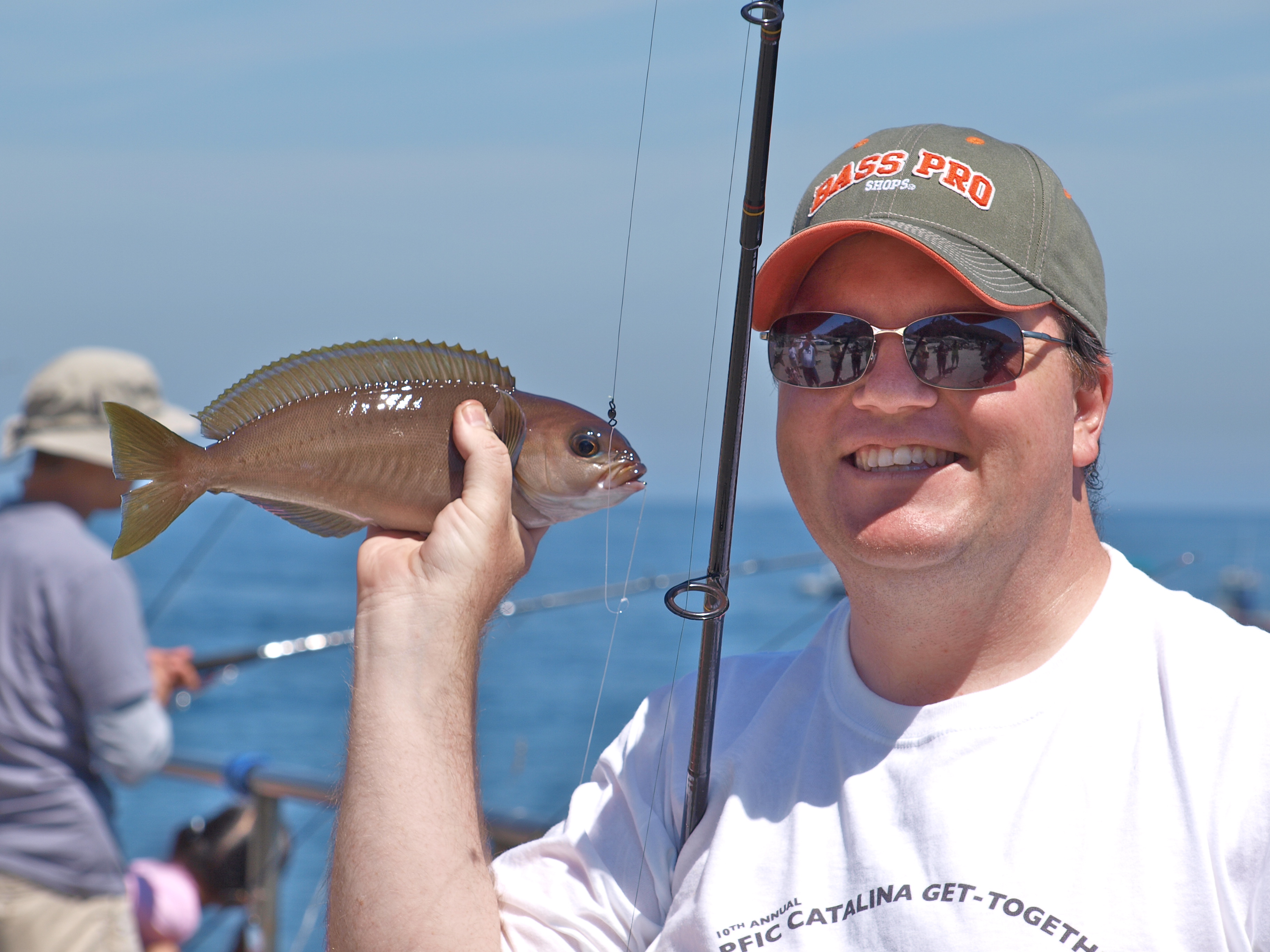 The high/low is the rig on which I catch the majority of fish. However, the light line can mean the loss of a larger fish and the inevitable clash between line and kelp can be in the kelp’s favor. Also, always have extra hooks and sinkers because you cannot fish the rocky (or kelp) structure without losing some gear (although the amount will depend to some degree on tidal conditions and if the surge is pushing your rig into/under the rocks). 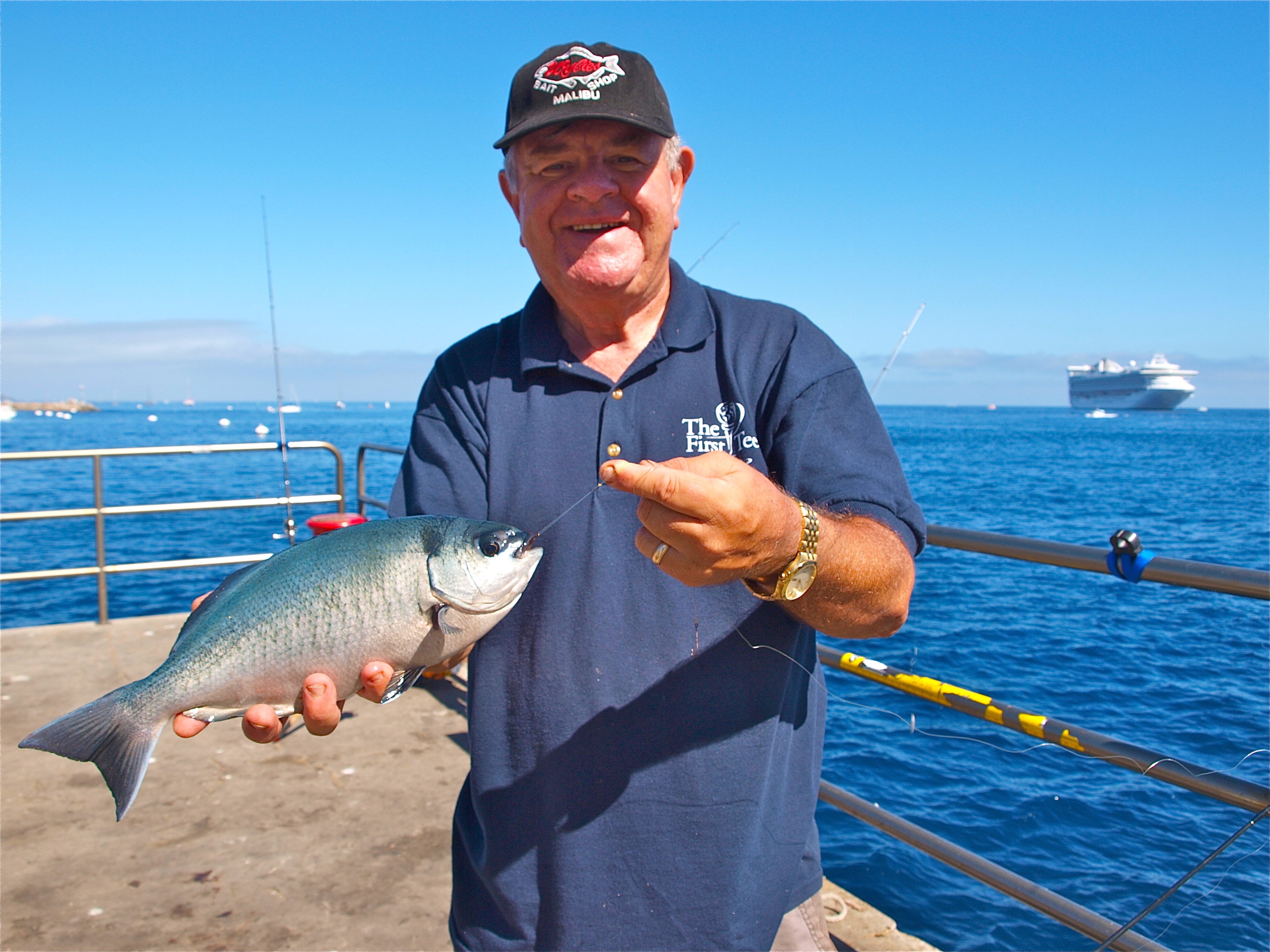 Generally I will drop straight to the bottom since most of the larger sheephead and bass are down toward the bottom (as are moray eel). Typically, since I am using two rods, the heavier rod is in more of a cast-and-wait mode. Do make sure you have your rod attached to the railing; it’s no fun when a big fish pulls your outfit over the railing. If using a baitcasting reel set the drag at a very low pull mark and be sure to set your clicker. If using a spinning reel, a Baitrunner or Baitfeeder-type reel is advantageous since it safely lets out line when there’s a strike. If you don’t have such a reel set the drag at a very low mark. 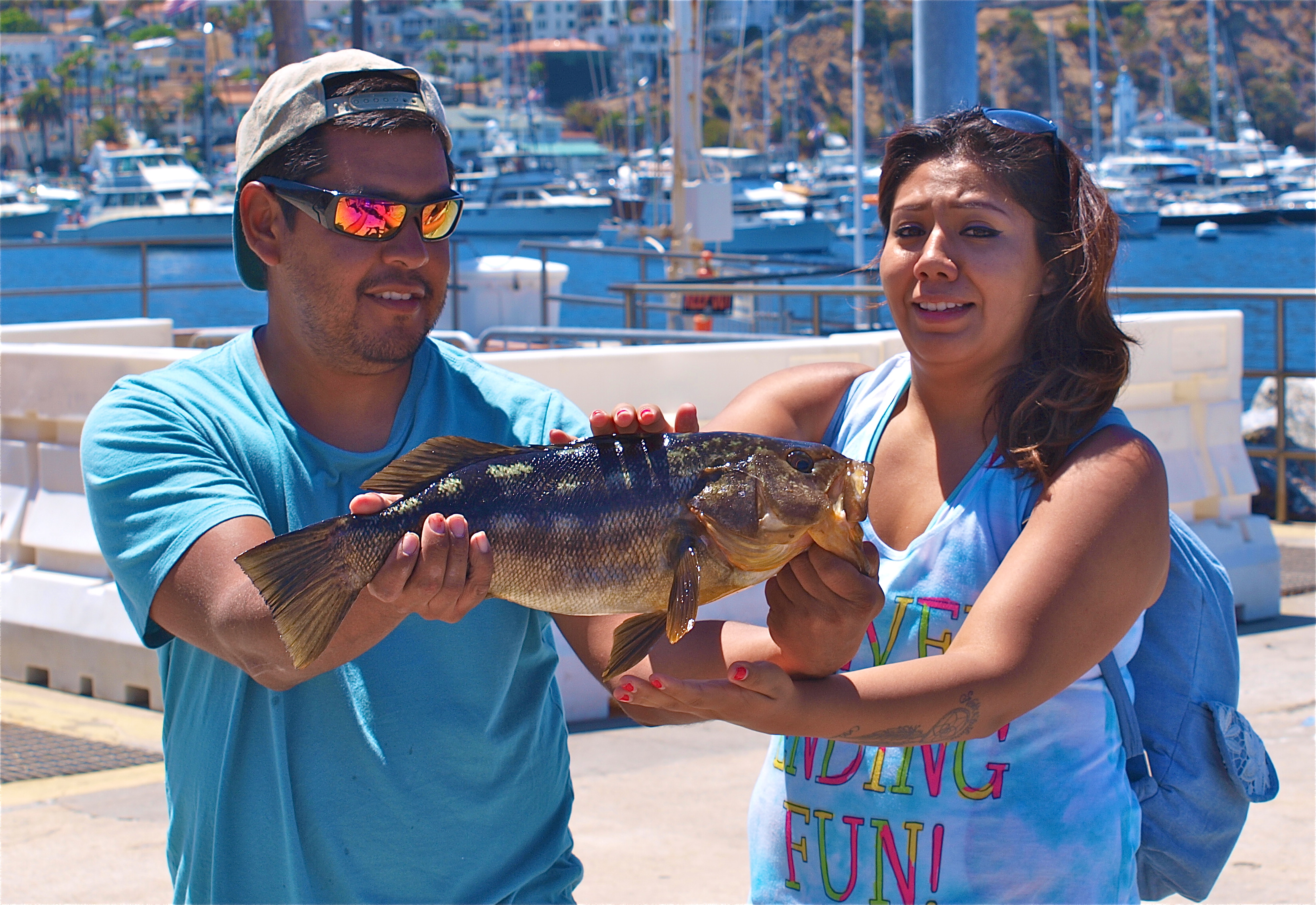 She doesn’t seem too interested in the calico (kelp) bass

Garibaldi are one of the favorite fish at Avalon and are usually the first fish spotted by visitors to the island (since you usually can see a few next to the ramp as you’re coming off a ferry).. They are illegal to target or keep but it can be hard to keep them off your hook when your fishing for other species such as opaleye and halfmoon. 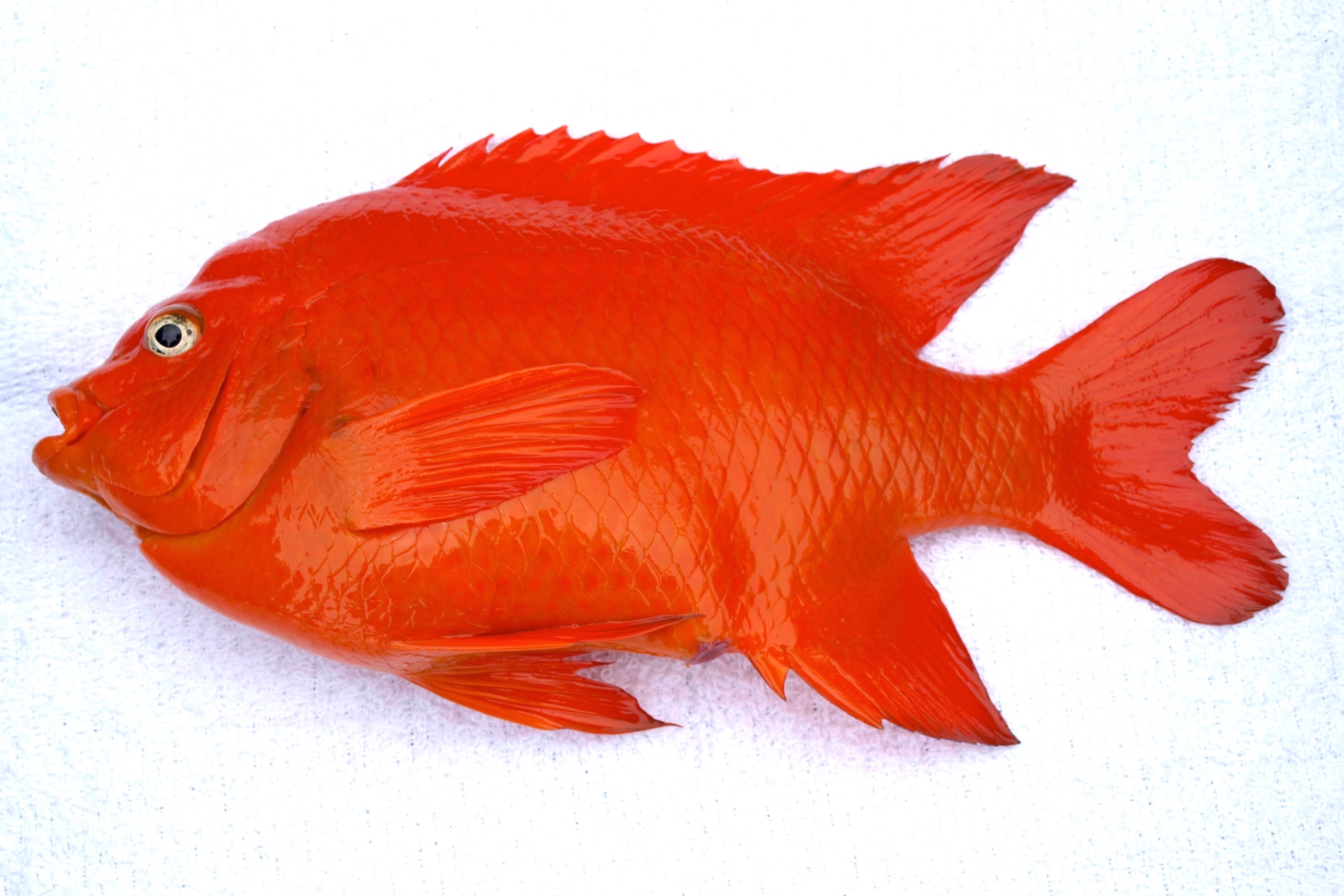 Adult garibaldi are a bright orange 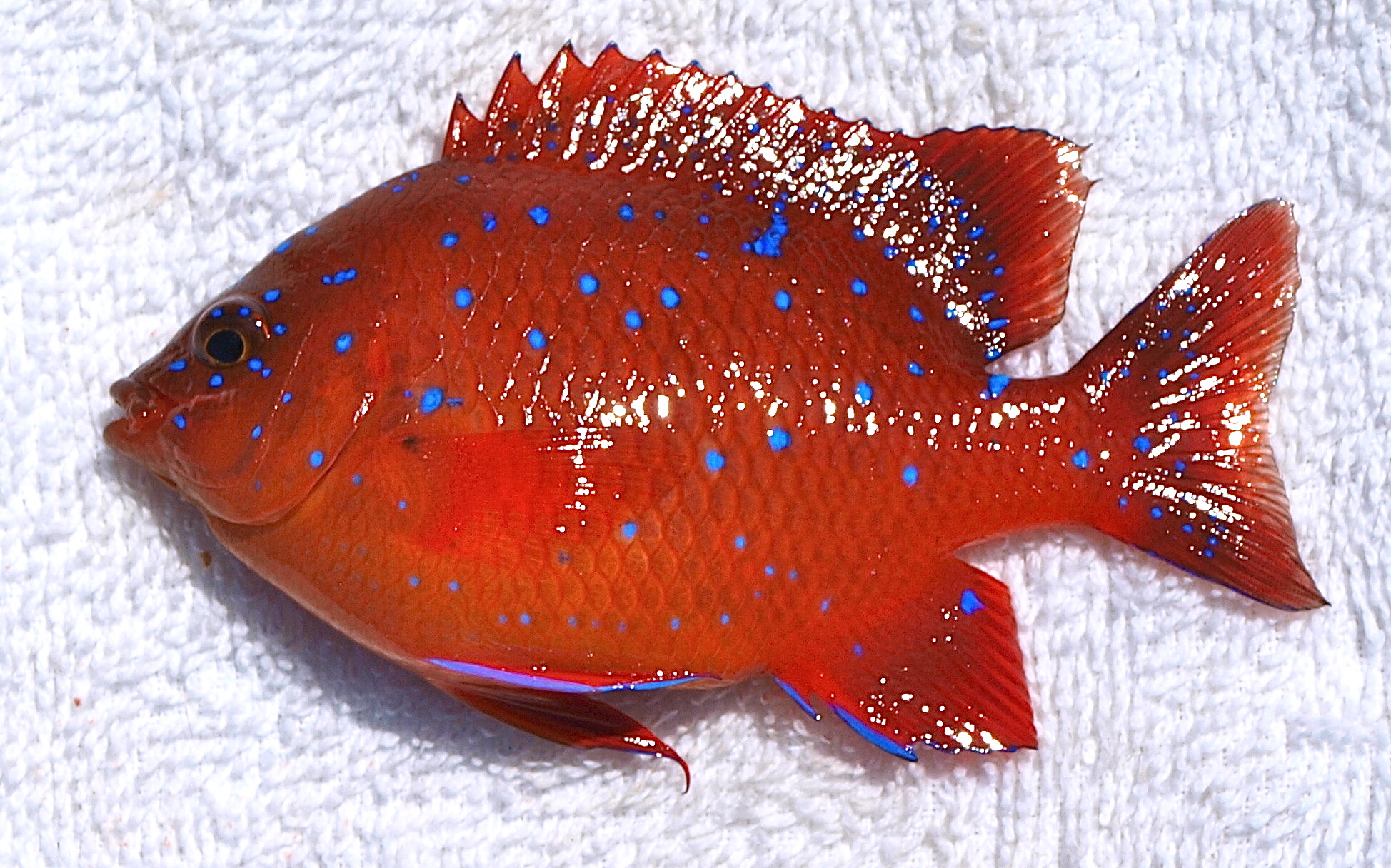 A slight variation is used if you want to make a long cast out past the kelp. Daring the Gods by such a cast guarantees your line will have to go through the kelp during your retrieve and it means, as often as not, that you will get snagged. It also means you may want to modify your rig. One change is to only use one hook (so it’s no longer a high/low). It means that if you hook a fish you only have to worry about the fish and the sinker getting through the kelp, you do not have to worry about the second hook grabbing some kelp. Another addition is to use braid as your line since it may cut through the kelp. Many anglers use braid with a fluorocarbon leader; hopefully the braid will cut a path through the kelp for your fish. One final technique is to have a lighter breakaway leader line attached to the sinker. If the sinker snags the kelp, the lighter line can break without you losing your fish. Nevertheless there are no guarantees. 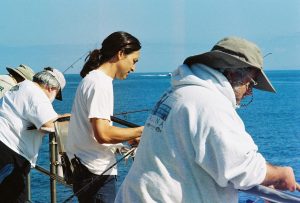 Anglers at the railing — PFIC regulars Graybeard, Jimbojack and Gordo

Worms are one of the favorite baits and will often yield non-stop strikes when using small hooks. However, small fish, especially senorita and rock wrasse, will often strip the hooks in a matter of seconds so be ready to strike. You will have to bring worms with you from the mainland, and they are somewhat expensive, but remember you only need to use a piece of worm large enough to cover your hook. A box of lugworms or a dozen bloodworms should last you most of a day. 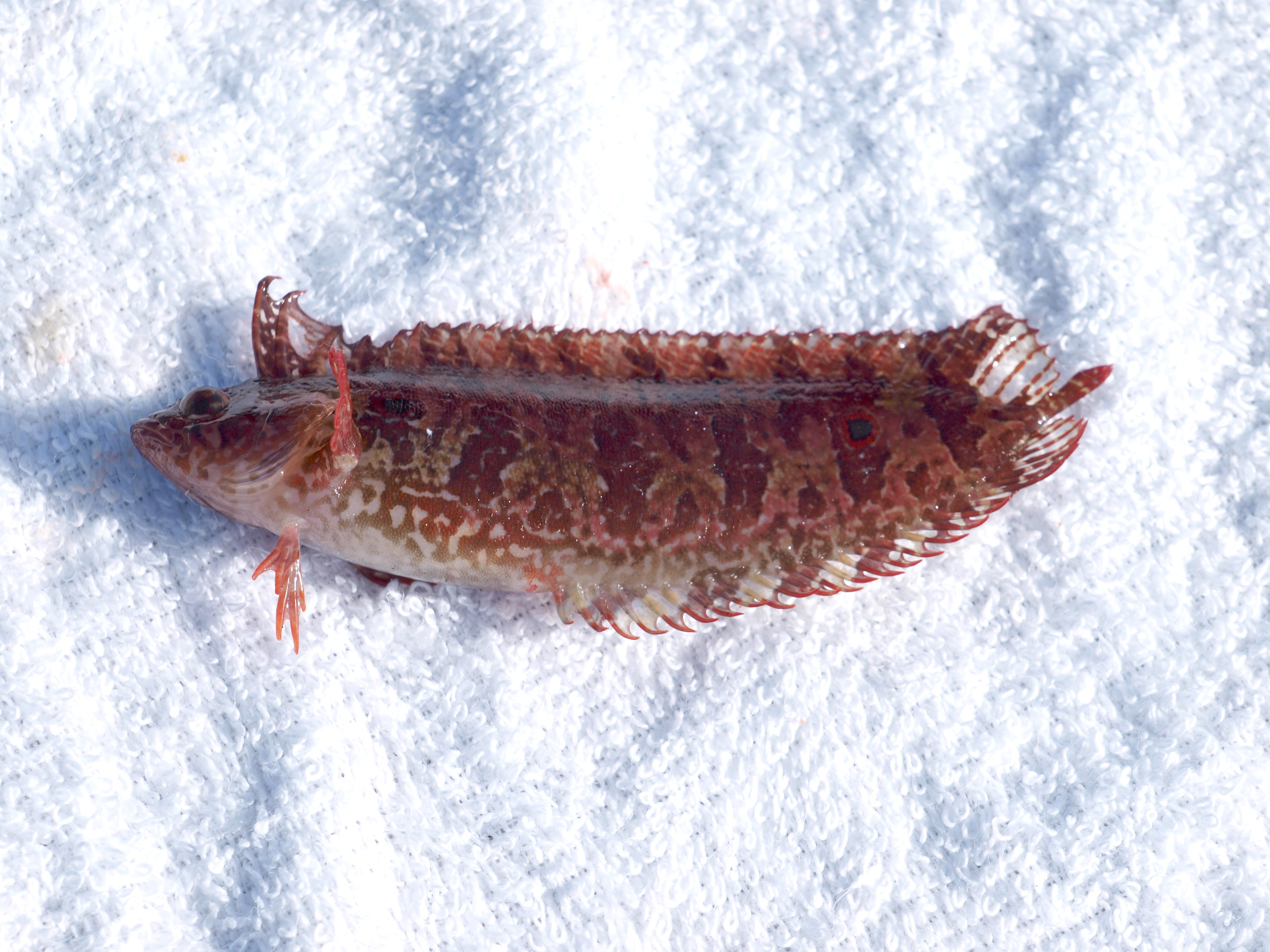 As for the ghost shrimp, break them into a couple of pieces and use a size 6 or 4 Kahle-type hook. Switch to a larger size Kahle hook if you want to use them whole. Ghost shrimp are excellent bait for many species, including sheephead and opaleye, but they also can be readily torn up by some of the fish. Considering the cost, and that you’ll have to bring them from the mainland, they are a somewhat luxury bait. There was a time when bait shops in the LA carried live red shrimp and they were excellent bait. But, I haven’t seen them in any shops for years. 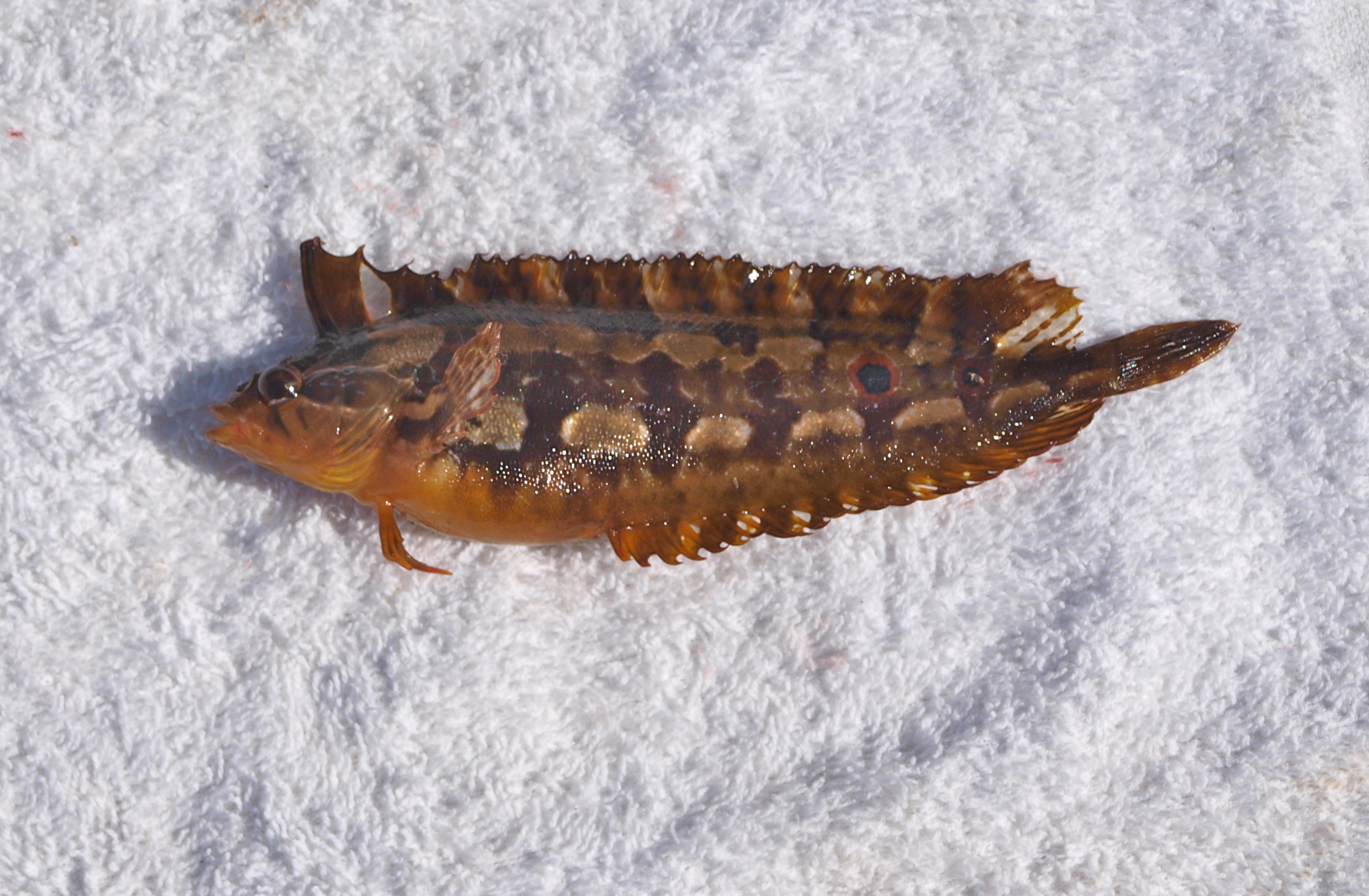 Frozen market shrimp are one of the main baits used at the Mole in part because they are available in Avalon. They can be good bait for a number of species but don’t use a whole shrimp unless you’re seeking the biggest fish. Cut a piece of shrimp to match the size of your hook. It will work fine and help the expensive shrimp last a lot longer.

Frozen peas (not canned peas) are the surprise bait used by locals and knowledgeable pier rats. Their popularity is due to opaleye, which seem to have adopted peas as a favorite food. However, peas are also used as chum at the Mole and readily gobbled up by most species. Over time the fish have grown fond of the peas and they are now a successful bait for many other species—halfmoon, blacksmith, perch, senorita, rock wrasse, and, surprisingly, even bass and mackerel. Occasionally a sheephead or even an ocean whitefish will be caught using the peas. Peas are available at markets in Avalon. If using peas keep them in a cooler; you do not want the peas to be frozen but you do want them to stay fresh and not dry out. 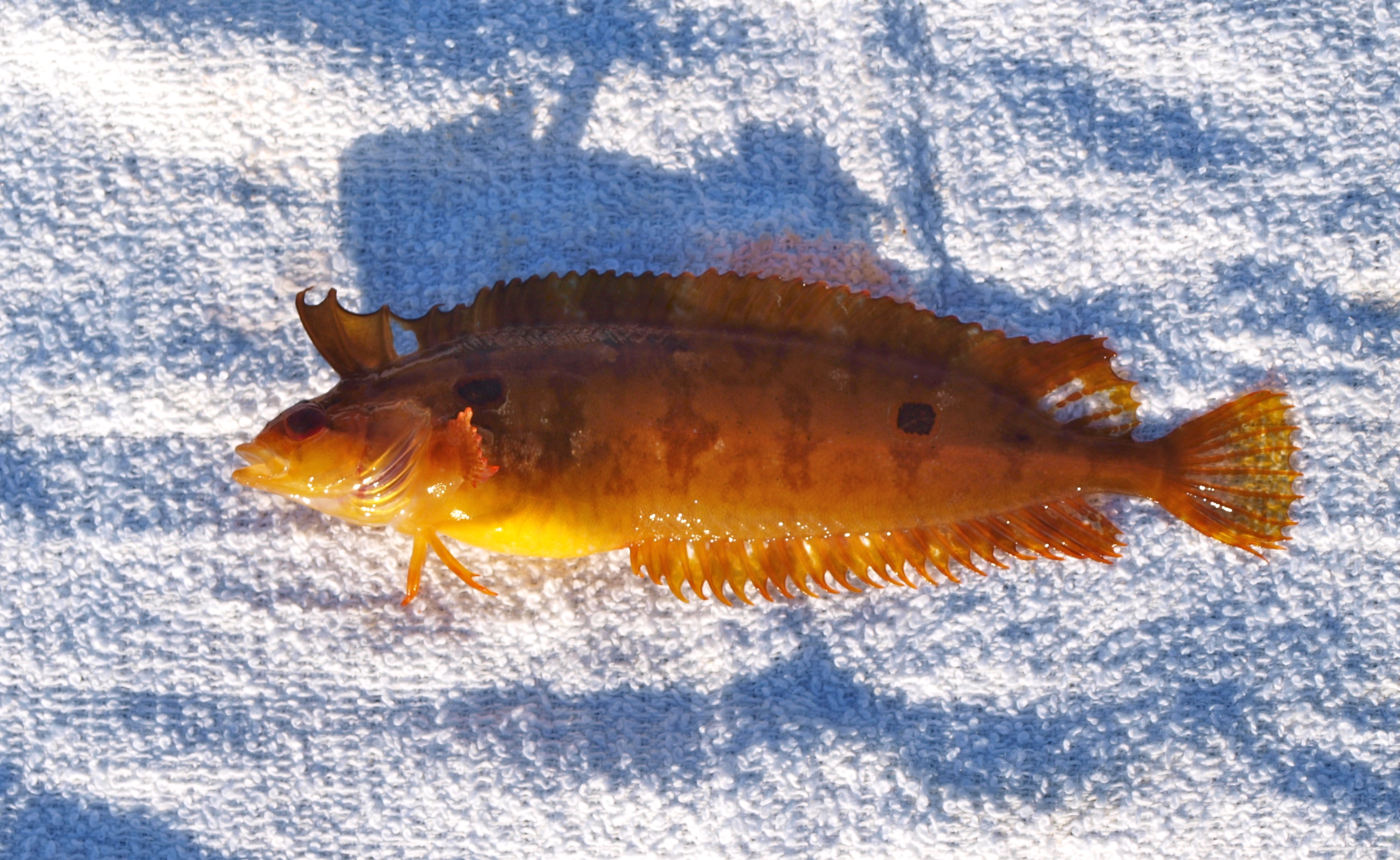 Frozen or live mussels can be brought from the mainland. They are effective on the same species as the worms but the tough muscle of the mussels will stay on a hook and last longer than a worm. Use a small piece of the muscle, just large enough to cover the hook leaving the barb free to hook the fish. As for the soft flesh, you can either tie it to the hook with thread (which will not last long with Avalon’s fish) or put it in a cloth sack or a piece of nylon. If simply put on a hook the mussel will be gone in seconds. 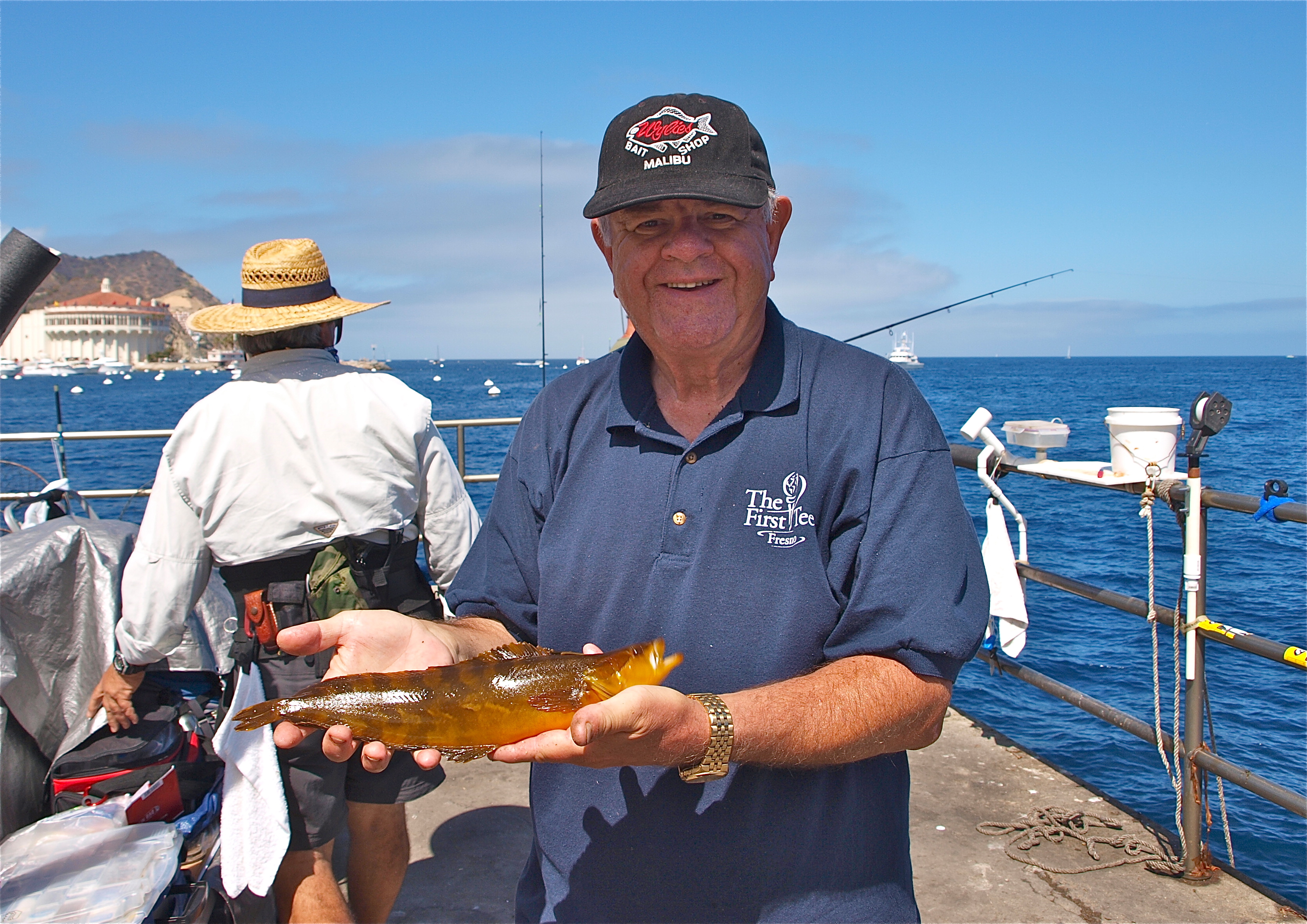 KJ, a not so giant giant kelpfish, and a crowded Mole

Frozen squid is generally available in Avalon. The result is heavy usage by anglers but tests over the years at the Mole show it to be inferior bait for most of the species. Strips of squid will catch bass, sculpin (scorpionfish), and some sheephead during the day but is most successful at night when it will yield up bass, rockfish, scorpionfish, sharays and moray eels. The squid will also work as bait when the pelagic species are around, especially Pacific mackerel and jack mackerel; both can be taken on strips of squid. The advantage to squid is that it is tough and can withstand the attacks of the small fish. It will also stay on your hook if you decide on a long cast (unlike some baits). Hopefully it will stay on the hook until a large fish decides to grab it. 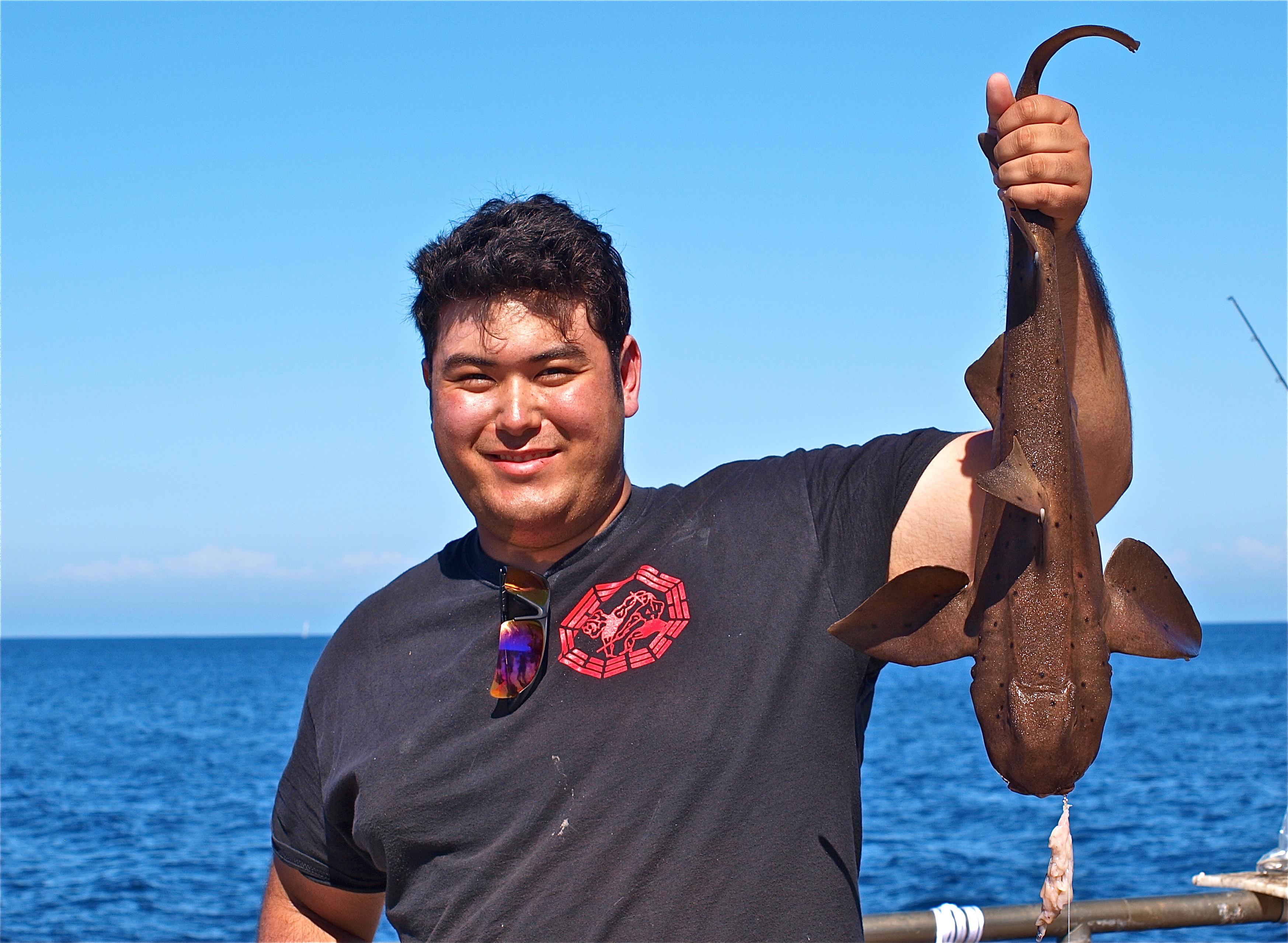 Once in a blue moon you may be able to snag some live squid at night (or even buy some from a squid boat). If you’re lucky enough to get some, and can keep them alive, they are the primo bait for white seabass and yellowtail that may be hanging around the Mole. 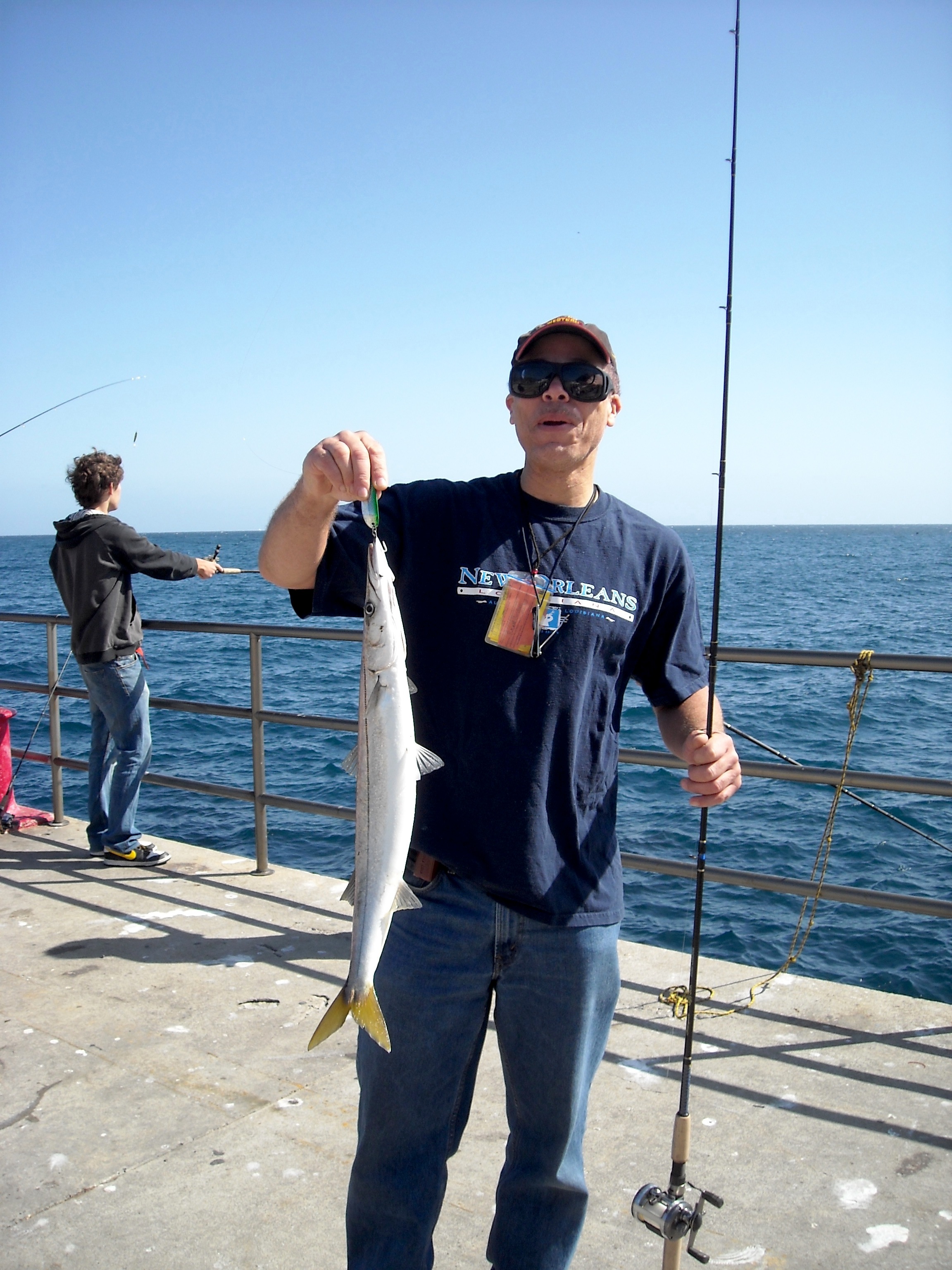 Redfish (Robert Gardner) and a barracuda

Anchovies make good bait for the kelp bass and can also yield a few rockfish and moray eel. The problem is that most whole anchovies or pieces of anchovy will be shredded within minutes (or seconds) by the smaller fish. Anchovies are simply too soft (although salted anchovies will last a little longer). They are best used at night when several of the Mole species—senorita, rock wrasse, and sheephead in particular, go to sleep. Anchovies are another bait generally available at the island’s bait shops. 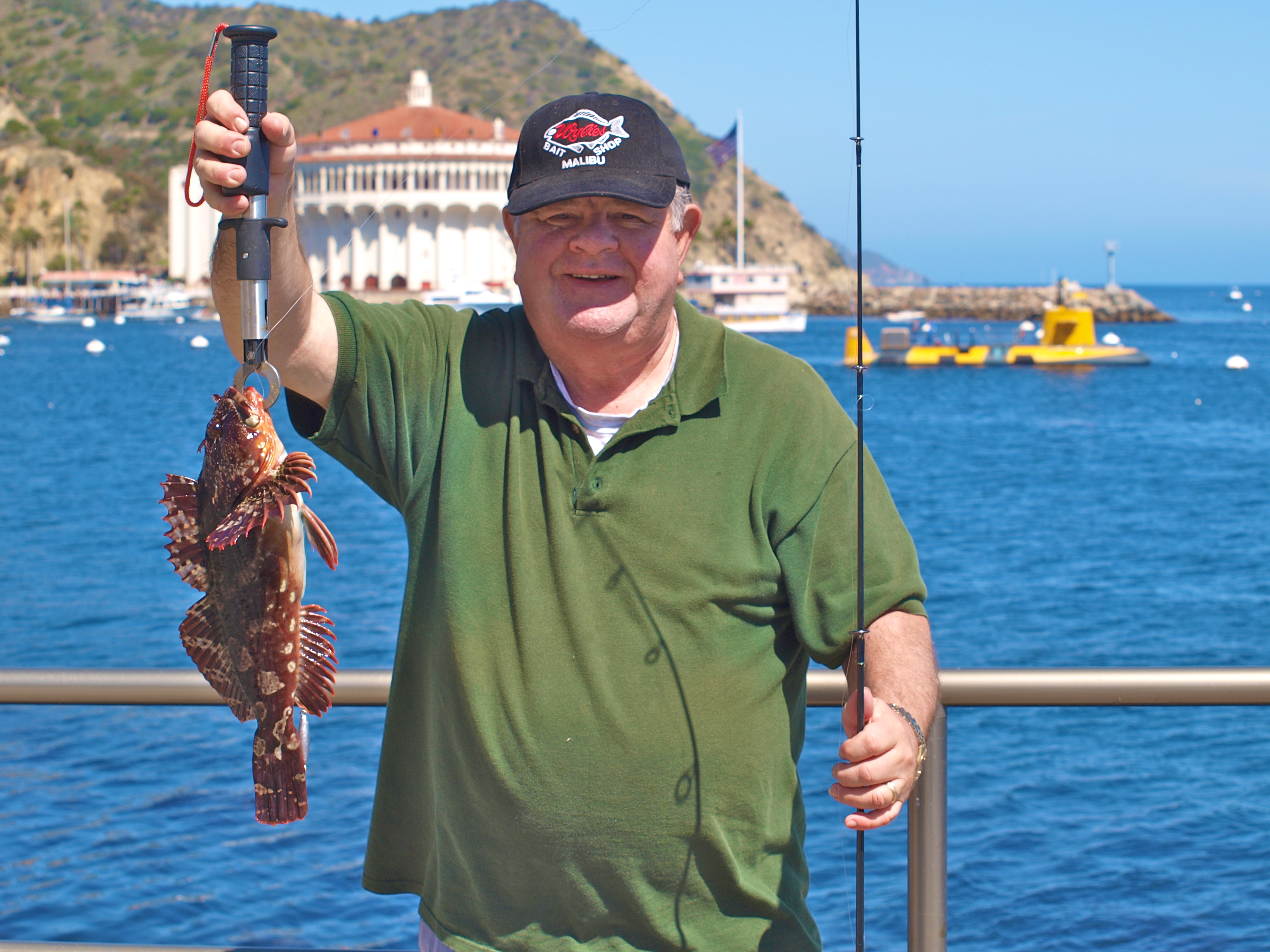 KJ and a cabezon

Mackerel is an alternative to anchovies. It is tougher and can often survive the onslaught from the smaller species, at least for a period of time, and since it’s an oily fish also is a good attractant for several species including bass, other mackerel (if they are around), rockfish, and sharks. Mackerel is sometimes available at Island bait shops.

Moss is another bait you will have to bring from the mainland. A few shops in the LA area carry moss; most do not. You can get your own off of jetty rocks or from underneath slips and docks in harbors. 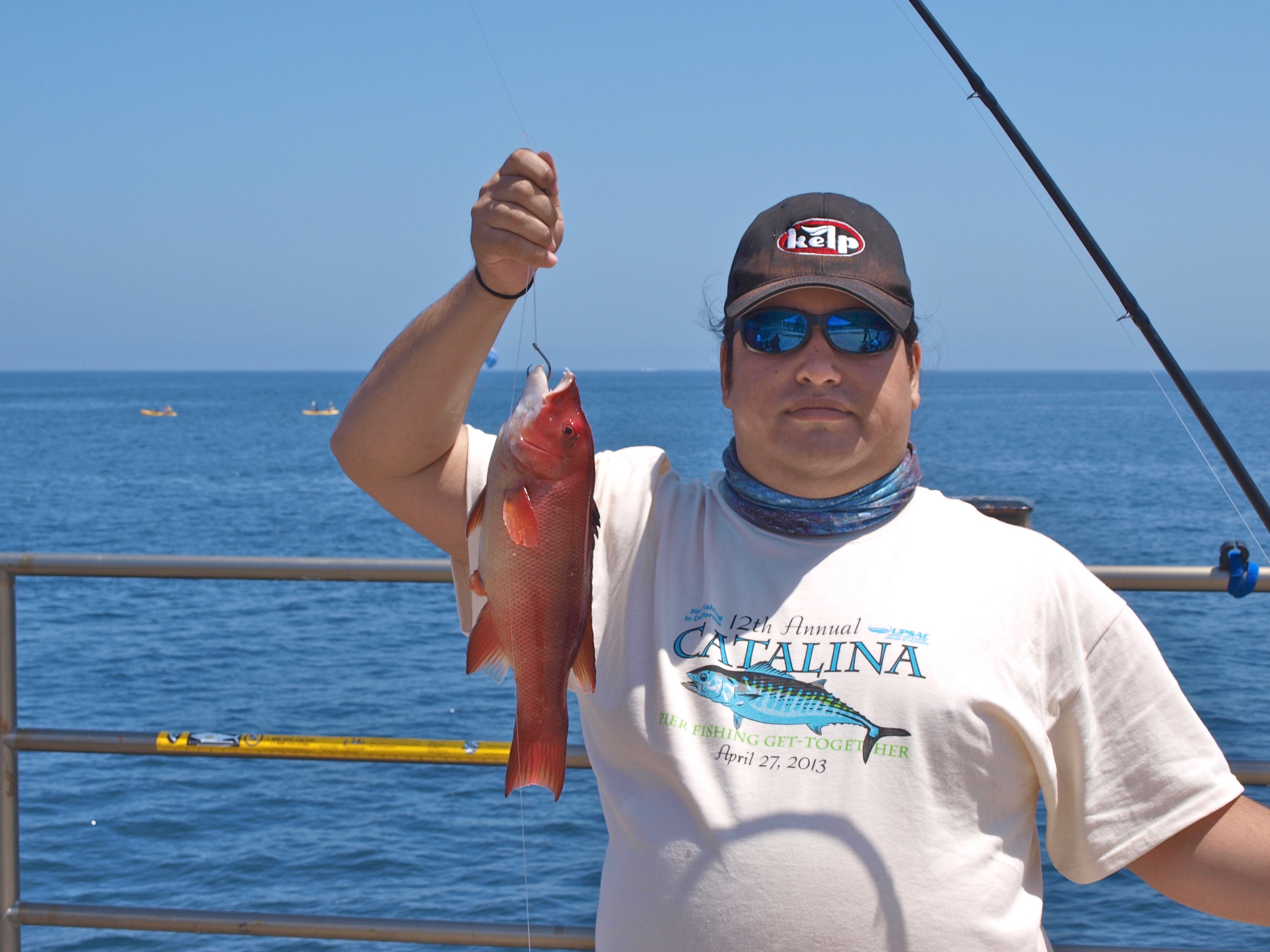 A word of caution! Remember that there is no live bait and limited frozen bait  (usually anchovies, squid, and shrimp) on the island. Pier rats generally stock up on bait at a mainland bait shop, stick it in a cooler, and bring it with them. Tourists though who get the urge to “go fishin’” can find bait. The main bait and tackle shop is High Tide Traders on Crescent Street (not too far from the entrance of the Green Pleasure Pier) while some bait is seasonally available (generally during the summer) at Joe’s Rent-A-Boat (mid-way on the Green Pleasure Pier) and Rosie’s (at the end of the pier) on the weekends. Frozen shrimp is also usually available at the Vons Market in Avalon. 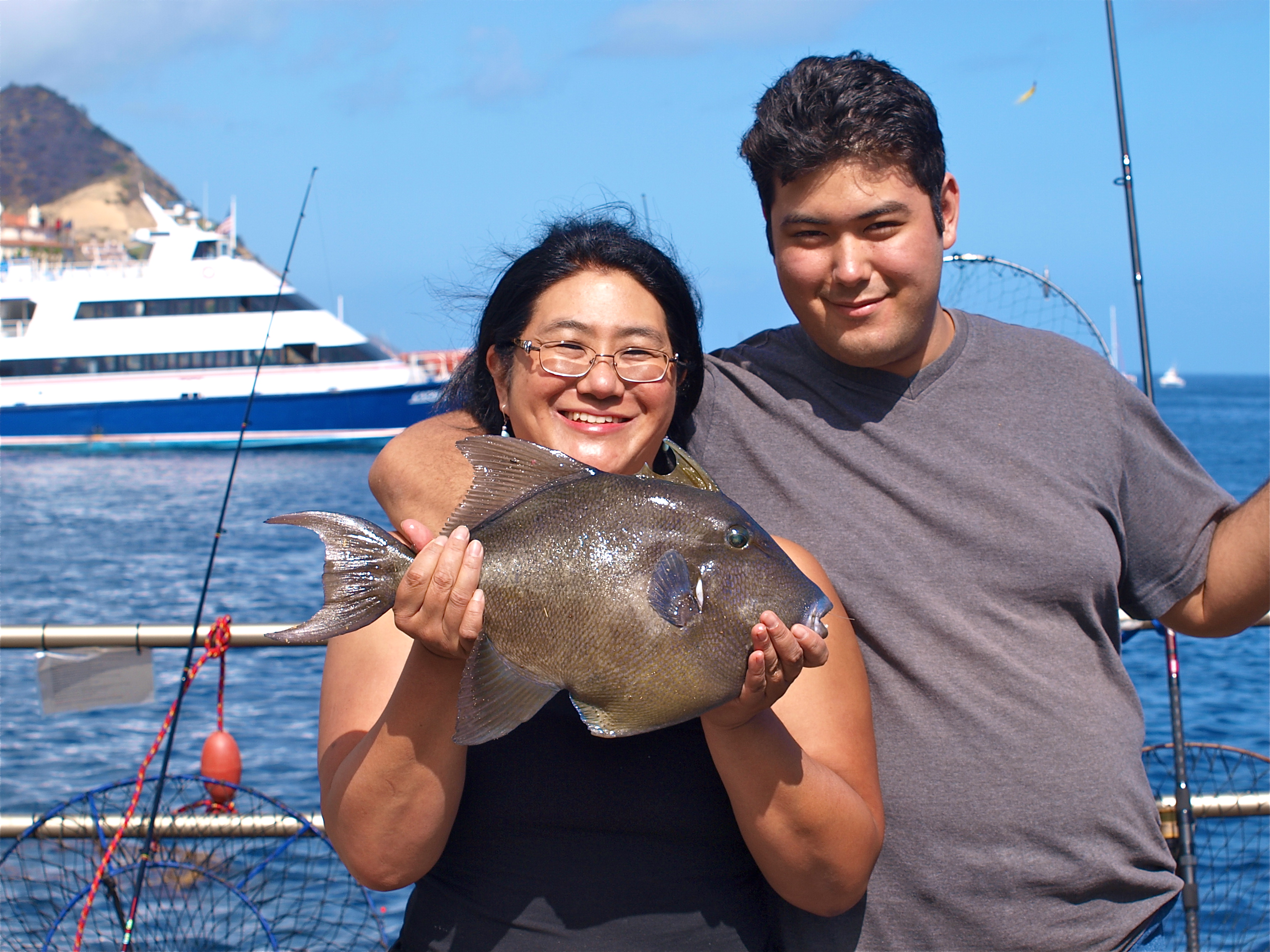 Rita, her son Kyle, and her triggerfish

Opaleye live largely on algae—and various organisms that live on algae. I catch opaleye every trip to the Mole and catch them on my high/low rigs. Typically I fish bait mid-depth using ghost shrimp, worms, peas or pieces of market shrimp. Given the non-vegetarian mix of baits I probably do not catch as many opaleye as if I were concentrating on them. However, given my search for variety I’m usually satisfied to catch the occasional opaleye. 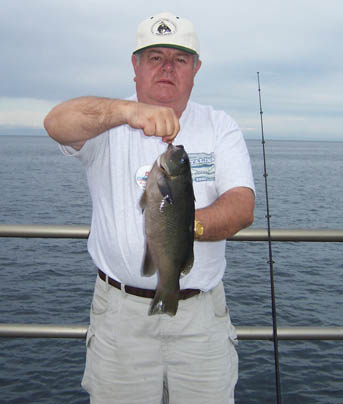 Then there are the “pros.” The opaleye attract a steady group of anglers who come over from the mainland just to fish for opaleye. Sometimes they come in a group and stay a few days but many times it’s just a few people and they come in the morning and leave at night. It seems a pricey proposition considering the cost of the ferry but it shows the high esteem that opaleye engender among anglers.

These opaleye “pros” bring special tackle, bait, and the know-how to fill a cooler with fish (sometimes following the law and sometimes breaking it). And though I typically stick to my high/low rigging, I’m watching—and learning—from these pros.