Species: Sebastes mystinus (Jordan & Gilbert, 1881); from the Greek words sebastes (magnificent) and mystas (priest, referring to the dark color of a priest’s clothing).

Range: Sources vary somewhat. Probably found just south of Punta Baja, northern Baja California, to central Oregon, while most common in southern and central California. Some sources say common from the northern Channel Islands to north of Eureka. Blues are the most frequently taken rockfish by recreational anglers from Point Conception to Fort Bragg (and generally in the top three species overall for the same area). Adult blue rockfish rarely move more than 6 miles from their home area. 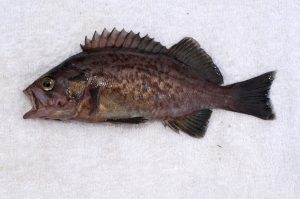 Habitat: Although adults have been recorded from the shoreline to nearly 1,800 feet deep, they’re a mid-water species most common to shallow-water reefs and kelp beds. They are often found mixed with olive, yellowtail, and black rockfish. Most pier-caught fish are younger fish that prefer shallow-water rocky areas or kelp-covered pilings. Because of their small mouths, blues primarily feed on plankton and are considered to be “omnivorous/zooplanktivorous” happily gulping down such delicacies as jellyfish, tunicates, thaliaceans and algae. However, they will also feed on squid, small crustaceans, and small fish, including young-of-the-year rockfish. During years of rich, upwelled water their numbers increase, during warm-water years and less plankton, their numbers can drop.

Piers: Most blue rockfish caught from piers are landed from Monterey north. Best bets: Monterey Coast Guard Pier, Monterey Wharf No. 2, Santa Cruz Wharf, San Francisco Municipal Pier and the Fort Baker Pier. Fishing in the wells out toward the end of the Santa Cruz Wharf can produce a lot of small blue rockfish.

Shoreline: An occasional catch by rocky shore anglers in central and northern California.

Boats: One of the most common rockfish taken by “rockcod” anglers fishing in central California north. Blue rockfish have been over fished. The blue rockfish catch by recreational vessels off southern California dropped by 95.2% between 1980 and 1996; in Monterey Bay, almost all blue rockfish now taken by anglers are immature fish.

Bait and Tackle: On piers, most often caught around the pilings under the piers on small, size 6-4 hooks. Best baits are pile worms, small pieces of shrimp, strips of squid, or fresh mussels. On boats they are often taken just under the surface of the water with squid being the most common bait.

Food Value: An excellent eating, mild-flavored fish that is somewhat soft textured with small flakes and moderate fat content. Suitable for all mthods of cooking but best when fresh; the flesh seems to become strong flavored more rapidly after capture than other species.

Comments: Blue rockfish males can live to 44 years, females to 41 years. They’re one of the faster growing rockfish species (with females growing faster than males): one-year-old fish may reach 4.5 inches in length, two-year-old fish 6 inches. Some females are mature (reproductive) at 9 inches and 5 years, all are mature by 14 inches and 11 years; males mature somewhat later (just like Humans). Genetic evidence suggests two species of blue rockfish may exist in California.