Identification: Perch-shaped but not so deep—compressed and somewhat elongate. Their dorsal fin is long and undivided. Their coloring is dark blue or black on the back, grayish blue on sides, yellow tones in fins; they have black spots on the posterior half of the body.

Habitat: Shallow-water, rocky-shore areas and in kelp beds; young and adults aggregate according to size. Generally surface to 150 feet deep although recorded to a depth of 203 feet. Reportedly migrate to rocky holes shortly before sunset where they hunker down for the night. Those unable to find a hole or crevice cluster after dark in dense schools near the rocks. 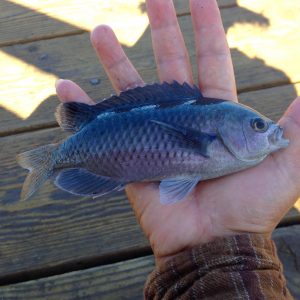 Food Value: Most are too small to have much meat but they have a mild flavor with fairly soft texture. Can be cooked with many methods.

Comments: Really only common at a few piers although I have seen them caught at many piers. It is reported that young blacksmith seek out cleaning fish, usually juvenile pileperch or senorita, and place themselves in positions where the cleaning fish are almost forced to remove external parasites from them. During these actions, the blacksmith may be head up, head down, on their side or even upside down. If the cleaner tries to leave, blacksmiths follow and prevent escape. Talk about bad manners.