Species: Raja binoculta (Grard, 1855); from the Latin words raja (skate), bi (two), and oculata (eyed, referring to the markings on top of the skate).

Identification: The only skate with a notch in the rear edge of each pelvic fin. The nose is long, bluntly pointed, and broadly triangular. The body is flat with two separate dorsal fins near the end of the tail. Their coloring is gray, brown, reddish brown, olive brown, or blackish, with smaller white spots and two prominent eyespots above; whitish with a possibility of dark spots below. 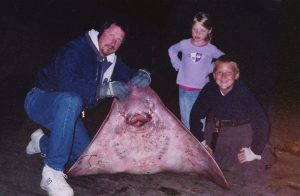 Size: Reaches eight feet in length and to over 200 pounds. Those caught at piers rarely exceed 100 pounds in size although two big skates, one at the Cayucos Pier in July 2004 (estimated at 5 feet by 5 feet) and another one taken at the Trinidad Wharf in the summer of 1996 (4 1/2′ wide and 5 1/2′ long), seemingly were over the century mark.

Habitat: Generally found in water of moderate depth although ranges from the shallows to a depth of at least 1,640 feet and possibly 2,624 feet; luckily for pier fishermen, they’re also found over sandy-shore beaches and in bays. 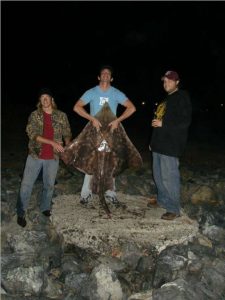 Shoreline: An occasional catch for northen California fisherman in Humboldt and Arcata Bay.

Boats: A few are reported from boaters and kayakers fishing in Humboldt and Arcata Bays. 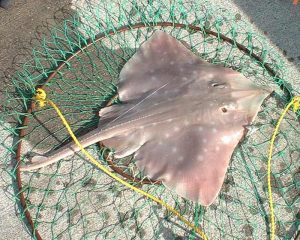 Bait and Tackle: Due to their potential size, medium to heavy tackle should be used. However, most biggies are caught by anglers seeking other species, few anglers fish specifically for skates. Most any bait will tempt a skate but squid, clams, ghost shrimp, marine worms, and small fish seem to work best.

Food Value: Like guitarfish, skates when used for food are really delicious. They have a firm texture with no apparent flakes and a mild taste. The fat content is low. In Europe, where skates are considered a delicacy, the fillets (from th wings) are usually poached, steamed or pan-fried in butter. Anothr method is to cut off the skin around the wings and then use cookie cutters to punch out pieces of meat that are somewhat similar in taste and texture to scallops. Many stories tell of skate being sold in stores as scallops but some experts say that it is doubtful, that the differences are two pronounced. Deep-frying is the most common method of cooking for skate prepared in this manner.

Comments: Far less common than bat rays but the average big skate taken is fairly good size. According to the CA DF&G, “skates have paired electric organs along the sides of their tails, which generate weak, low-voltage electric currents believed to be of use in intra-specific communication, possibly for mate recognition or to demonstrate aggression. These electric currents are not harmful to humans.” 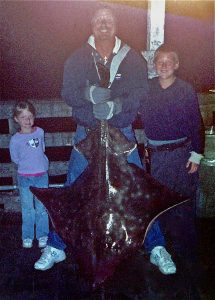 Big Skate—Although fairly uncommon, the ones that are caught are often large in size.