One day while checking out the new and improved waterfront area in Richmond, I ran across the Barbara and Jay Vincent Park—and this small pier. At least it’s a wannabe-pier since it sits over water and pilings. Unfortunately it’s not a designated public pier so you’ll need a license but it’s a beautiful setting and a great place to bring the kids.

Environment. The Barbara and Jay Vincent Park is located at the end of Peninsula Drive in Richmond while the pier itself sits at the end of the park near the entrance to Richmond’s Marina Bay.

Off to the left (south) of the pier are the waters of Richmond‘s Inner Harbor, a small sand beach, and a small jetty that gives protection to the waters surrounding the pier. Past the jetty and not too distant in the bay is Brooks Island Regional Preserve and, somewhat hidden, tiny Bird Island.

On the right (north) side of the pier, are the waters of Richmond’s Marina Bay and Inner Harbor Basin.

Straight across the water (west) sits the Lucretia Edwards Shoreline Park. To the west of that park sits Point Potrero (once site to Kaiser Shipyard #3) and Sheridan Point, home to another small pier.

The shoreline by the pier is mostly riprap rock but the northern shoreline of Marina Bay, near Meeker Tidal Creek, includes salt marsh and tidal wetlands.

The bottom straight out from the pier seems to be mostly sand or mud but there is some grass off to the left of the pier. Water depth is fairly shallow inshore but a good cast reaches out into deeper waters. 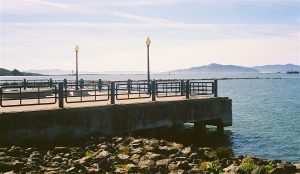 Fish and Fishing Tips. The fish caught here are the traditional species caught along the near shore areas of San Francisco Bay—perch, jacksmelt, kingfish (white croaker), striped bass, sharays (sharks and rays), and the occasional halibut. Common on the bottom are bullheads (staghorn sculpin) and the occasional goby (various species).

If it’s high tide time and the water is lapping the shoreline wall you can try for perch using a high/low rig, small hooks, and pile worm, grass shrimp, ghost shrimp or pieces of market shrimp. Drop straight down by the pilings or cast out parallel to the pier in the fairly shallow water. December to March can see schools of pileperch and whiteperch along with some blackperch, rubberlip perch, rainbow seaperch and other varieties. April 1 to the end of July sees a perch closure in the bay but late summer to fall can produce a variety of perch including the aforementioned species as well as the smaller surfperch—walleye and silver.

Jacksmelt to some degree are found year round and when a school swings by the pier try two to three small hooks (size 8 or 6) fished under a float. Bait up with pile worms, pieces of shrimp or strips of squid.

Kingfish will be found most of the year with summer months usually producing the most fish. Use a high/low baited with cut anchovy or pieces of sardine and cast out into the channel away from the pier.

Striped bass are the most sought after fish and fish exceeding thirty pounds are a possibility. Some angers swear by bait, some swear that the best and most fun approach is to use an artificial lure. Both will work. Best baits have traditionally been cut sardine, a whole anchovy, or pile worms fished with a high/low leader on the bottom. Some prefer live bait with a shinerperch, small smelt, or small bullhead used with a plastic live bait rig or a Carolina-type rig. Some say that in the fall months the bullheads have a tendency to burrow into the mud. If so, use a dead bullhead but make sure it‘s a slimy bullhead.

Pluggers casting for the stripers use a variety of lures including Hair Raisers, spoons and, increasingly, soft plastics such as Big Hammer. Most will work. 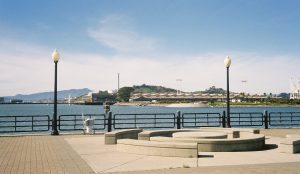 Sharks and rays are the predominant larger species. Most common are brown smoothhounds, mostly small to mid-sized fish, while leopard sharks are also common and many of them reach good sizes, some exceeding four feet in length. Less common but a possibility are 7-gill sharks, mostly smaller to mid-size fish.

Very common are bat rays that prefer squid for bait. Most will be in the 10-20 pound class range but fish approaching 100 pounds or more are always a possibility and few fish put up the strong, sustained fight of the “mud marlin.” Be sure you have a hoop net to net the fish.

In the summer months, halibut are a possibility. Most of the flatties will be caught on a live bait, small shinerperch and melt being the most common bait. Use a Carolina-type leader or one of the fish finder riggings. Cast out away from the pier into the deeper waters.

A fish only occasionally caught, but a possibility, is sturgeon, mainly the large white sturgeon. They prefer ghost shrimp and grass shrimp but have been known to grab almost anything on the bottom in their vacuum-like mouth. If you’re lucky enough to hook and land a sturgeon remember that you can only keep fish between 40-60 inches.

A final mention might be made about Pacific herring that sometimes make an appearance in the winter months. If they do show anglers will net them or can use Sabiki-type bait rigs for them (but remember you can only use three hooks in the bay) They’re good eating fish and good bait for the larger ifsh.

<*}}}}}}}}}>< — The waters of Richmond’s Inner Harbor are considered the most polluted in San Francisco Bay. Signs recommend that anglers NOT EAT certain species with striped bass, surfperch, sharks, kingfish (white croaker) and sturgeon leading the list. Unfortunately they are some of the main fish caught at the pier

<*}}}}}}}}}>< — The entire area around Marina Bay was once heavy industry, mainly being the home to Kaiser-Richmond Shipyard #2. Several art works in the park commemorate both the transformation of the waterfront and the experiences of the WWII workers who labored to build ships for the war.

The “Shipyard Stories” sculpture is a model of a “Liberty Ship” smokestack covered with stories and photographs.

<*}}}}}}}}}>< — The park is a park within a park since it is located within the larger Rosie the Riveter World War II Home Front National Historical Park.

<*}}}}}}}}}>< — A short way up the street is the Shimada Peace Park that commemorates friendship with Richmond’s sister city in Japan. (It’s also noted as a good fishing spot.)

<*}}}}}}}}}>< — Brooks Island. Brooks Island Regional Preserve is a 373-acre island is a site once inhabited by the Ohlone Indians and later used by settlers for grazing and quarrying. Today it is a protected site for nesting Caspian Terns and California gulls.

History: The six-acre shoreline park was developed by the city of Richmond and opened in 1997. It is named after Barbara and Jay Vincent who had jointly fought for years to establish public access and parks along Richmond’s shoreline.

As a youth Jay’s father was the station engineer for the railroad ferry at Ferry Point.  He grew up fishing and crabbing at the point and eventually began to build and sail boats.

In time he would be the Commodore of the Richmond Yacht Club multiple times as well as serving on numerous committees and associations in the Richmond area.

Barbara was at one time the chair of Richmond’s Planning Commission, a founding member of the Save the Bay Association, and, like Jay, was a member of numerous boards and associations working to establish public access and parks to the region.

By the 1960s, public access on Richmond’s 33-mile long shoreline had shrunk to a mere 60-foot-wide public boat ramp. Both saw a need for change and from the ‘60s until the ’90, would devote much of their time to opening up that shoreline to the public.

For Vincent in particular, the renovation of Ferry Point, the area where he grew up, and the opening of the public pier in 2002 was a highlight.

Hours:  Sunup to sundown: no parking is permitted in the parking lot from sundown to sunup.

How To Get There: Take I-580 to the Marina Bay Parkway and follow it west to Peninsula Drive which dead ends at the park parking lot.