It’s unclear the purpose of this pier. Probably it was built simply as a place for rest and as a place to watch the life on the estuary. A constant navy of ships and boats pass by the pier, every conceivable size and type. Given its location at the entrance (or exit) to the marina, small boats, some simple, some fancy, are constantly passing close by the pier. Further out in the estuary you see sailboats practicing tacking into the wind, collegiate rowers being timed, fisherman heading to their favored spots, and more. It’s an always interesting world and deserves a small place like this pier to sit back, relax and enjoy the sights.

Of course whenever a pier is built it’s likely to be discovered by anglers and soon will gain a second life as a fishing pier, whether that was its purpose or not. 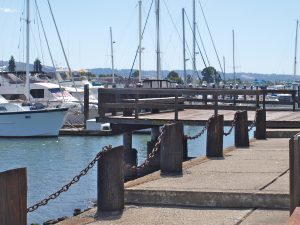 Environment.  The small pier sits near the northeastern corner and entrance into Fortman Marina and it fronts the waters of Fortman Basin and Brooklyn Basin, both parts of the larger Oakland estuary.

Across the water, on the Oakland shorefront is the embarcadero with additional marinas, sailing craft, and its own small piers —the Estuary Park Pier, the Executive Inn Pier and the San Antonio Pier.  A short distance to the east sits Coast Guard Island Alameda.

The water in this part of the estuary is, for the most part, protected and relatively calm, a good mix for both boaters and anglers. At the same time, big tides can mean big currents.

The bottom is mostly mud along with a few rocks and other unseen traps that can occasionally latch on to a line.

Unfortunately, the pilings sit mostly out of the water so the piling “reefs” found at most piers, pilings that can attract fish, are absent. 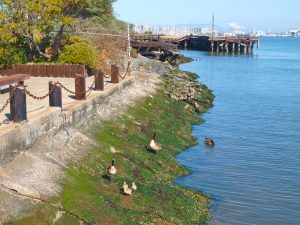 The shoreline is covered with rock and pieces of old concrete slab, the remains of industrial use over the past 150 years. To the left, just out of casting distance, is a decrepit old wharf and pilings that would appear to be a prime spot for perch. To the right are docks in the marina, docks usually holding a boat or two.

The main fish in these waters are jacksmelt, perch, sharks, rays, striped bass, a few flatfish (wintertime flounder and summertime halibut), and the usual small gobies and sculpin that will grab small baits on the bottom. 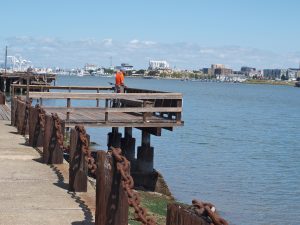 Fishing Tips. As at other local piers, the main fish are jacksmelt, perch, striped bass, kingfish (white croaker), sharks, rays and a variety of sculpin and gobies on the bottom.

Given the inability to fish the pilings, anglers are really left with two choices, casting out into the deeper waters, or casting into the shallower waters on both sides of the pier.

Jacksmelt will range along the shore’s waters schooling a few feet below the surface of the water. The easiest approach is to simply tie 2-3 small hooks, size 8 or 6, onto the line a couple of feet above a torpedo sinker and attach a float of some type a few feet the top hook. Best baits include pile worms, small pieces of market shrimp, strips of squid and small pieces of fish. If the jacksmelt are in the area they will find the food.

Perch, and here that generally means blackperch, pileperch, whiteperch and shinerperch will be found in the shallower waters, Casting to the left or middle of the pier may find fish while I like to cast over by the docks that are perpendicular to the pier. Perch will sometimes hang under those docks both for protection and food. Do be careful not to cast on to a dock or boat. It’s a good way to quickly upset the locals. The best rigging is a high/low rig with size 8-6 hooks fished on the bottom. The best baits are pile worms (or bloodworms), ghost shrimp, grass shrimp, small pieces of market shrimp or small strips of mussel. Prime time for the larger perch is December thru April but there’s a perch closure in the bay from April 1 to the end of July (although it’s OK to keep shinerperch and they make good bait for stripers).Blackperch will still show later in the summer and fall while schools of smaller walleye and silver surfperch sometimes make a visit 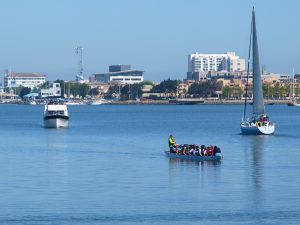 Spring to fall months, typically May to October, are the prime times for striped bass with cut bait, live bait and artificial lures all working to bring in the stripers. A high/low rig baited with cut sardine or anchovy works well. A live bullhead (staghorn sculpin) or shinerperch on a Carolina-type rig will works. And, a variety of artificial lures will work. Check with the locals to see what’s producing the fish.

Kingfish (white croaker) are found most of the year and hit best on cut anchovies fished on a high/low on the bottom. Use size 4-2 hooks.

Brown smoothhound and leopard shark lead the shark parade and will hit a variety of baits on a high/low with size 2 to 4/0 hooks. Brest baits are oily and/or bloody such as sardines and mackerel but they will also hit on squid.

Bat ray are one of the most numerous fish caught at the pier. Most will be 10-20 pounds but some really big ‘uns do inhabit these waters. Use somewhat heavier tackle with a high/low rigging or a Carolina-type leader with a whole squid. The bat ray put up a strong and sometimes sustained fight, which is why they have earned the nickname—“mud marlin,”

Lastly are a number of small fish that can show up when you are fishing for other species and using small hooks. Leading the list will be staghorn sculpin (bullheads) follow by a variety of goby species—largemouth goby (mudsuckers), yellowfin goby and chameleon goby. All can be used as live bait for the stripers and sharks. 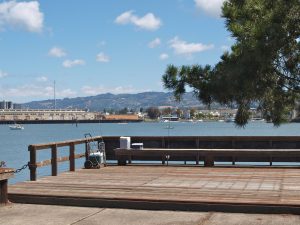 In 1926 the Alaska Packer Association changed the name of the anchorage to Fortman Basin. It was a time of change. Many of the old wooden ships were retired to be replaced by steel sailing ships while the basin itself began to see private, smaller craft call the basin their home.

Pat Clintsman, who owned a boat company in the basin, began to construct the Warren Craft, a motor cruiser. As his boats were launched they needed berths and such berths began to be to appear along the Basin’s westerly shore.
In 1935, Lou Hulsey purchased Fortman Basin Marina and expanded it to 100 berths he called it Hulsey’s Sunken Gardens. 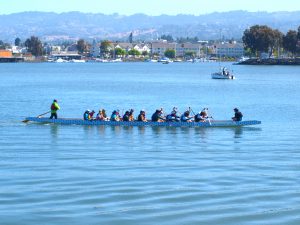 The early ’40 saw another change in ownership as Hulsey was replaced by Pat Kirrane. He named the facility the Alameda Yacht Harbor and doubled its size. During the war he   leased the harbor out to others.

In 1945, the boat works was purchased by Walt Latham and Emerson Doble who continued the production of wooden   yachts and then, in 1954, Latham and Doble purchased the Alameda Yacht Harbor itself.

In 1967 H.P. Anderson and company assumed ownership and again theHarbor grew and expanded in size.

Finally, in 1984, the Alameda Yacht Harbor was purchased by Hunting Gate Investments, Inc., who renamed it, Fortman Basin. The harbor was expanded once again, this time to its current size of 497 berths. 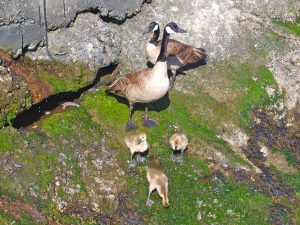 The Birds. There always seems yo be some birds hanging around the pier and shoreline area. One day I saw this family of geese. 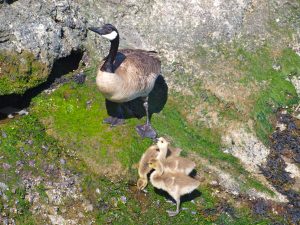 Facilities: There is free parking near at the foot of the pier and a few benches on the pier. Restrooms are available at the Marina’s main office, mid-way out from the street.

Handicapped Facilities: None. The pier surface is wood and the railing is approximately 40 inches high.

How To Get There: If traveling south on I-880 — Take 23rd Street exit (Kennedy), Follow 23rd Street over the Park Street Bridge. Turn right on Buena Vista Avenue, (second light after the bridge). Follow Buena Vista and turn right into the Fortman Marina driveway (just before the large red brick building on the right). On your left is a street sign that says “Entrance” with a faded blue sign for Fortman Marina. Go through the gate and stay to your left, passing the yacht club and the small building with the bathrooms, to the parking area for the docks.

If traveling north on I-880 — Take 23rd Street exit. Make a U-turn at the first available chance (11th Street). Go back over the freeway to Park Street Bridge. After crossing the Bridge, turn right on Buena Vista Avenue, (second light after the bridge). Follow Buena Vista and turn right into the Fortman Marina driveway (just before the large red brick building on the right) per the instructions above.