“Ellis Island of the West.” No Statue of Liberty lights up the sky although perhaps one should! The nickname recognizes the role this island played during the first half of the twentieth century. More than a million immigrants entered the Golden Gate and were detained at Point Simpton, the West Coast Immigration Station that set on the island. Today, the 758-acre island is a state park and a favorite destination for those wanting to hike or picnic (although the black-tailed deer can be a nuisance). It is also a great place for history buffs! Last, but certainly not least, the island contains a fishing pier. For pier enthusiasts (a.k.a. pier rats) it is a unique spot, albeit somewhat expensive, the only public pier in northern California that sits on an island.

Environment. The pier is located in Ayala Cove on the north side of the island; it fronts on Raccoon Strait, and sits almost directly across the water from the Elephant Rock Pier. The pier was built in the ‘70s and is basically L-shaped. However, a dock connects to the left side of the end (for the loading and unloading of the ferries) that creates a T-shape effect. The main stem of the pier faces west and is approximately 150-foot-long but then the pier turns north and reaches out another 100 feet into deeper water. Although relatively short as piers go, water can be over 20 feet deep at the end (which shouldn’t be too surprising since water reaches a depth of over 200 feet in the narrow, half-mile-wide Raccoon Strait). Most structure pilings are concrete, as is the surface, but there are also wooden pilings along the side of the pier and all pilings are heavily encrusted with barnacles and (some) mussels.

Along the shoreline, the bottom is primarily rocky (and covered with algae during summer months). Between the shoreline and the outer parts of the pier is a tidal basin of moderate depth that has a mud bottom, although there are also a few rocks and old pilings that will snag lines. The bottom, away from the pier, is also mud and shows a rapid drop-off in depth.

Casting away from the pier will yield a lot of sharks (primarily brown smoothhound, leopard and spiny dogfish), bat rays, skates, white croaker (kingfish), sanddabs, a few starry flounder, and even an occasional lingcod.

Less common are striped bass and halibut, although both are distinct possibilities. Sturgeon are in these waters nearly year round (but especially during the winter) and salmon move through these waters in the fall, but I haven’t heard of any being caught from the pier. 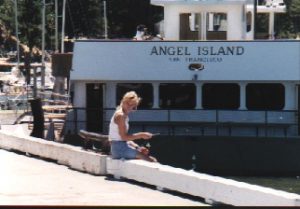 My daughter Kim gives it a try.

Fishing Tips. Best times for the perch are the winter and spring months. Keep the hooks small (size 4, 6, or even 8) and use pile worms, grass shrimp or fresh mussels for bait. Best spots for the perch are the inshore sections by the shoreline rocks during high tide, in the tidal basins themselves, or directly under the pier. Fish on the bottom using a high/low leader and remember that if a perch starts to tap a bait you need to be patient, let the perch hook themselves. Blackperch are the most common perch, but if the large rubberlip are around, consider using a motor oil or root beer colored rubber grub as a lure. Drop the grub to the bottom and then jig it up and down. You may not get as many fish, but often the ones you catch will be large, trophy-size perch. One place to try for perch is where two pilings stick up out of the water on the right side of the main stem of the pier; it is an ideal spot and has proven productive in the past.

Brown rockfish can bite year-round, although there seem to be two distinct populations of fish at the pier. In the winter and spring you will mainly find perch in the tidal basins with fewer numbers of rockfish. However, the rockfish will often be good sized (at least for brown rockfish). In the summer and fall, the tidal basins will often be thick with brown rockfish but most will be fairly small. In the winter and spring a size 4 hook with shrimp or worms will yield the rockfish; in the summer or fall a size 6 hook with pile worms is by far the best bait. In the tidal basins, simply cast out and let the bait reach the bottom. If there is no bite after a few seconds, begin a slow retrieve stopping every couple of feet. Usually action will be fairly rapid, especially if you are using a shiny sinker that can attract the fish. You can also drop your leader straight down alongside the pier. Best results seem to occur if you keep your bait a foot or so off the bottom.

Sharks and rays can be caught at almost any section of the pier but the best action is in the deepest water. For these, be sure to use larger hooks, size 2 to 4/0, larger baits (especially squid), and have a way to land the large fish, a gaff or a net. Remember that the leopard sharks must be at least 32 inches in length.

White croaker are generally caught on cut anchovies fished in the deeper water. Use a size 4 or 2 hook, a high/low leader and a shiny sinker. Sanddabs will hit a small bait fished on the bottom. Starry flounder prefer grass shrimp fished on the bottom using a sliding sinker. The key to a lot of these bottom fish is keeping the staghorn sculpin off your hook (although they are not as bad in the winter and spring). Jacksmelt hit on pile worms or small pieces of shrimp fished under a bobber (or float).

Striped bass are one of the prizes from local waters. Most anglers simply throw out a chunk of sardine or a whole anchovy. Far better is a live shiner or a staghorn sculpin (bullhead) hooked on the end of a live bait leader. Halibut will also fall for this rigging although they prefer a shiner or a small smelt. Artificial lures may also land a few stripers; lures proven to be successful include Fish Trap Lures, Rat-L-Traps and bucktail-type lures such as Hair Raisers. Although the number of keeper-sized stripers are far down from previous years, this is a good area for the silver sided beasts.

If you want to try for sturgeon, and they should be available, try herring eggs, ghost shrimp, mud shrimp or grass shrimp, and fish the deepest waters away from the pier. Be prepared with a net in case you luck into one of these large critters.

<*}}}}}}}}}>< — There are a lot of sharks in the deep waters that surround Angel Island but you rarely hear about a thresher shark which is what this story is really about, not a man-eater shark.

A baby shark of the man-eating species, commonly called the basking shark, but known best to fishermen as the Manila shark, was caught near Angel Island last Thursday by Captain Maggio. The fisherman had quite a struggle to capture the ferocious youngster. The young shark is seven feet in length from the head to the extreme point of the tail and weighs fifty pounds. The tail is about three and a half feet long. Sharks of this species grow to immense size, weighing from 600 to 1000 pounds each.

The baby shark from which the accompanying sketch is made is on exhibition at J. B. Inguelia & Co.’s, 520 Merchant Street, and will remain there day-to-day.

The statement is made by the fishermen that this is the first of the man-eating sharks ever caught in the Bay of San Francisco, although they are common enough in southern waters off the coast of Mexico and Central America. It is surmised that this young fellow lost the school to which he belonged and in seeking for warmer waters entered the bay. He is well equipped with three rows of teeth. The fishermen estimate that he was able to strike a 300-pound blow with his tail.

History Note. The island was named by the Spanish explorer Don Manuel de Ayala who sailed his small craft, the San Carlos, into these waters in 1775. He named it “Isla de Nuestra Senora de los Angeles” which was shortened to Los Angeles Island and then to Angel Island by Americans in the 1800s. The first human residents of the island were apparently the Miwok Indians who cheerfully greeted Ayala upon his arrival at the cove. Little did they know the changes that would soon take place. In 1839 the island was granted to Antonio Maria Osio.

In the mid-1800s the U.S. military expelled Osio and established Camp Reynolds, one link in the chain of defense that protected the critical entrance to San Francisco Bay. After the Civil War, the camp served as a recruit depot for the “Indian Wars” of the 1870s and 1880s. Between 1898, the start of the Spanish American War, and the end of World War II, it was the site of one of the world’s largest induction centers, although it was renamed Fort McDowell in 1900.

From 1892 until the end of World War II in 1946, Hospital Cove (today’s Ayala Cove) served as the site for the U.S. Quarantine Station; passengers from “contaminated” vessels would have the pleasure of being fumigated and cleaned at the government’s expense.

From 1908 to 1940 the infamous Immigration Station near Point Simpton served as the entry spot for those entering the West Coast. Infamous because of the disparity in treatment shown the different ethnic groups. While Europeans were individually housed and generally given quick approval, Asians were crammed into barracks by the hundreds, often for indefinite periods. Pictures in the restored barracks display the shame and embarrassment of many who had lost their privacy and dignity. But pictures also show the hope for an improved future that drove the people to travel the thousands of miles to California’s shores.

After World War II the island was declared government surplus. Soon after, in the early ’50s, voters in San Francisco voted to annex the island as a park. But before that could happen, the Cold War intervened and the army decided to reactivate Fort McDowell, flatten Mount Ida, and use it as a Nike (Goddess of Victory) missile site. The missiles were installed in 1954 but removed just eight years later in 1962 when the army once again left the island.

During the fifties, the State Park Commission had acquired the Hospital Cove area (renaming it Ayala Cove) and began to develop the site as a park. When the military left in 1962, the remaining areas of the island were added to the state park.

Hours: The pier is open from 9 A.M. till sunset. Although the island is open 24 hours a day (and campsites can be reserved), most visitors arrive and depart based upon the ferry schedules. The Tiburon ferry generally makes the 10-minute run to the island hourly between 10 A.M. and 3 P.M. (5 P.M. during the weekend and summer) and returns 20 minutes after each of those hours.