Species: Atractoscion nobilis (Ayres, 1860) from the Greek words atrax (spindle) and skion (from sciaena, an old name for a European croaker) and the Latin word nobilis (noble). Known as Cynoscion nobilis until the 1990s. 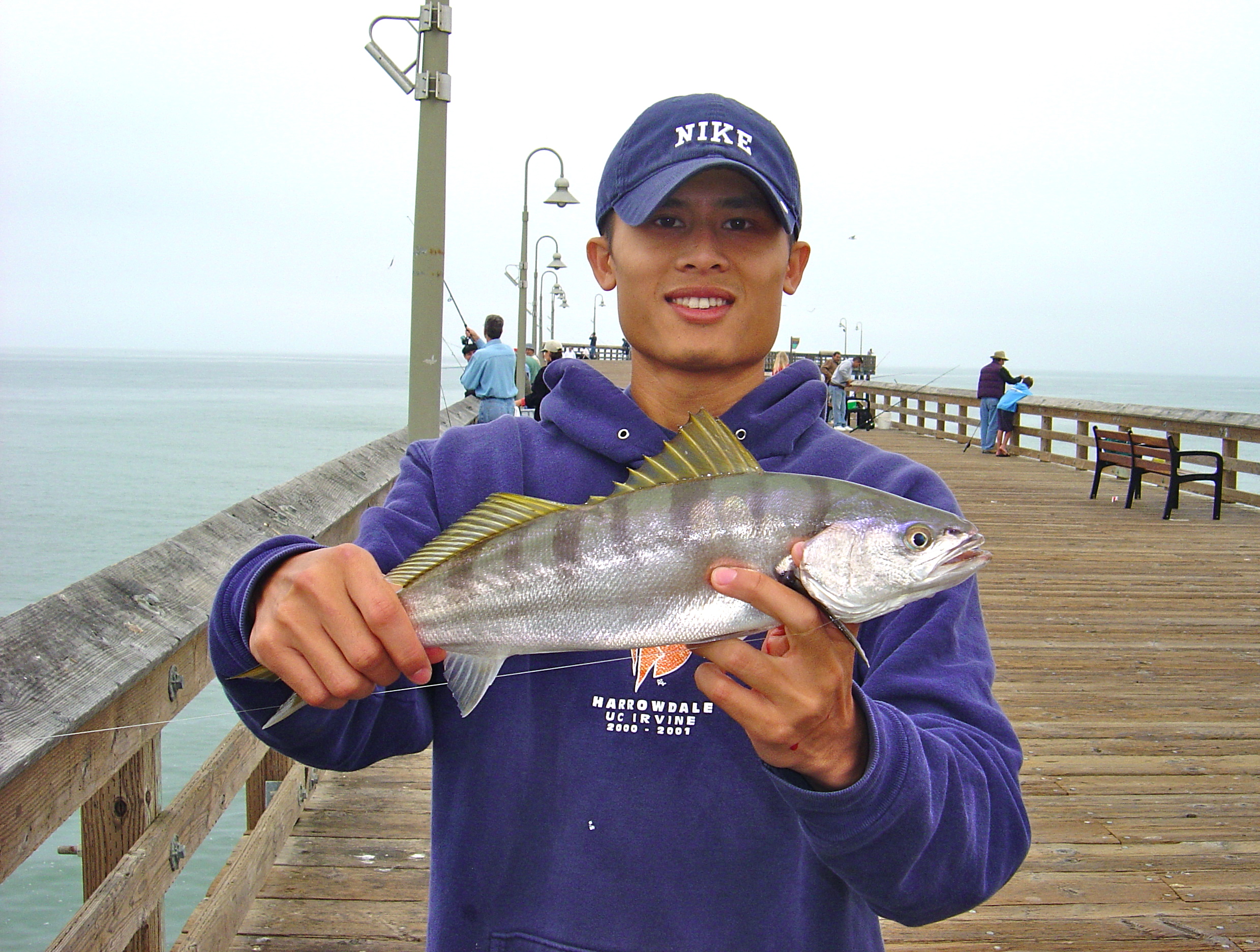 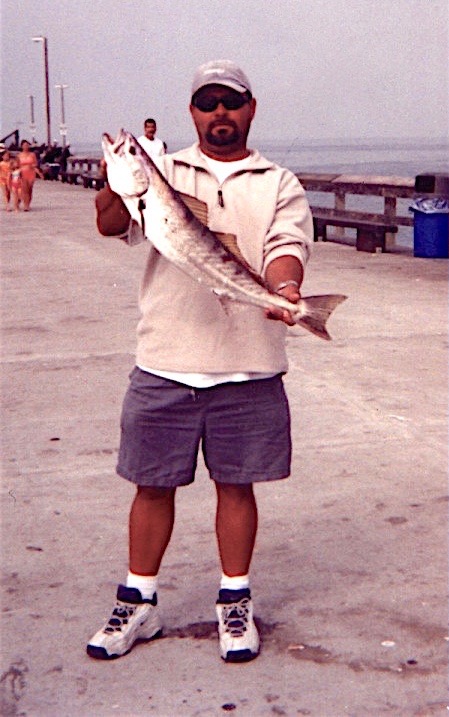 White seabass taken by Humberto at the Newport Pier

Size: White seabass are the largest of the California croakers. To 65.4 inches and over 90 pounds; those caught from piers are usually the young “seatrout” ranging up to 24 inchs in length. The California record “angling” fish weighed 79 lbs 0 oz and was caught at the mouth of the Pajao River in Santa Cruz County in 2011. The International Gamefish Association (IGFA) all-tackle angling record is an 83-pound, 12-ounce fish caught off of San Filepe, Mexico in 1953. On May 9, 2020, a 78.2 pound white seabass was caught by an angler drifting live bait in San Francisco Bay. The ocean diving record is a fish weighing 93 lbs 4 oz that was speared by a diver near Malibu in 2007.

Range:  Gulf of California, Todos Santos and Bahia Magdalena, southern Baja California, and along the Pacific coast to Juneau and Boca de Quadra, southeastern Alaska. Considered uncommon north of Monterey Bay (although an increasingly common catch in San Francisco Bay) and rare north of California. In the late 1800s the main commercial fishery for white seabass was off San Francisco and large catches were seen in both San Francisco Bay and Tomales Bay. By the 1930s, 90% of the catch was from southern California. The reason most often given was that waters in central California had cooled and that the white seabass were unable to produce as successfully as in earlier years. A more limited population still existed and still exists in Monterey Bay, especially in the Soquel Cove area, which typically sees the warmest waters in Monterey Bay. 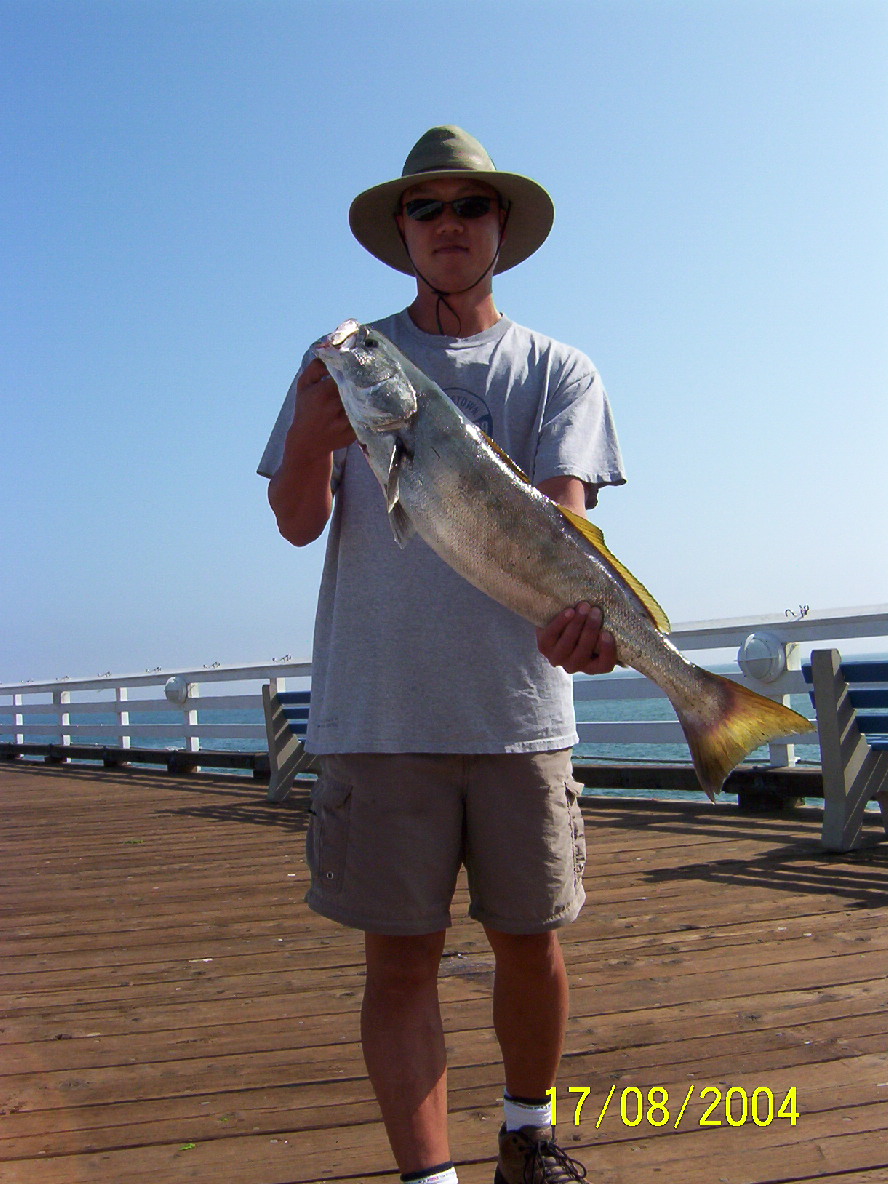 White seabass from the Malibu Pier

Habitat: White seabass migrate along the coast according to their spawning habits. Although some may be caught in southland waters year-round, they tend to move north in the spring and south in the fall, spending the winter months in Baja California. The best fishing is usually June to September. They’re most common around offshore islands. Typically schools over rocky bottoms from 10-40 feet deep feeding on squid and small fish; recorded to a depth of 804 feet.

Piers: Commonly taken at southland piers, although rarely if ever caught in numbers approaching that of 40-50 years ago. Runs of the smaller sea trout do occasionally occur in late summer and fall, however, these are usually fish that are under the legal size and must be returned to the water. Best bets: Ocean Beach Pier, Crystal Pier, Oceanside Pier, San Clemente Pier, Seal Beach Pier, Hermosa Beach Pier, Malibu Pier, Paradise Cove Pier and Ventura Pier. The last decade has seen quite a few taken from the Seacliff Pier and Capitola Wharf in central California. 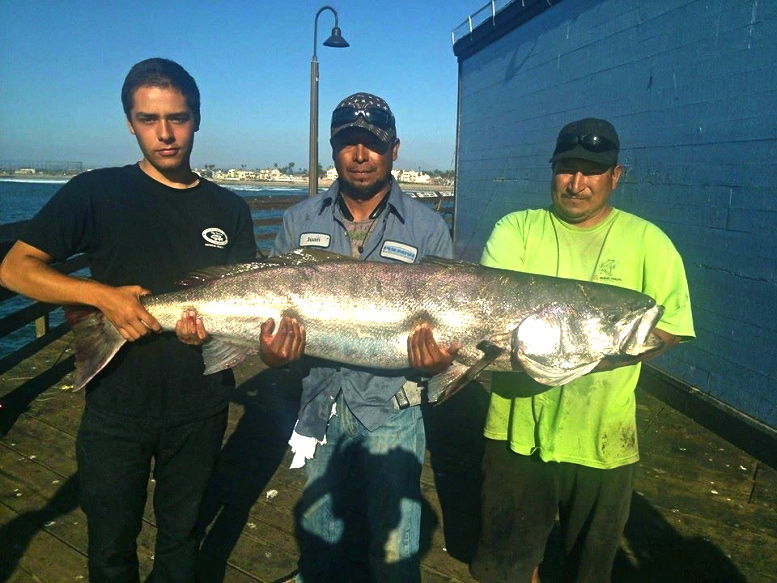 Large white seabass caught at the Imperial Beach Pier in 2014

Boats: One of the most prized species for boaters in southern California.

Bait and Tackle:  Unlike other California croakers, white seabass prefer the pelagic habitat rather than inshore areas. They prefer to feed in mid-depth areas rather than on the bottom like most croakers. They’re favored meals appear to be squid, pelagic crabs, and small fish. As a result, anglers should seek them from the deepest waters of the pier and be willing to try different depths. In addition, the early morning hours have traditionally been the best time for white seabass. Tackle should be medium to heavy with at least 20-pound test line and size 2 to 2/0 hooks fished near the bottom. The best bait is live bait: anchovies, smelt, queenfish or shinerperch. Next, would be frozen anchovies, sardine or mackerel strip bait, or squid. If specifically seeking these fish, try using a live bait sliding leader and cast out a considerable distance from the pier. At the Hermosa Beach Pier, and other piers where artificial reefs have been constructed, a favorite ploy is to cast out a live jack mackerel as close to the reef as possible. 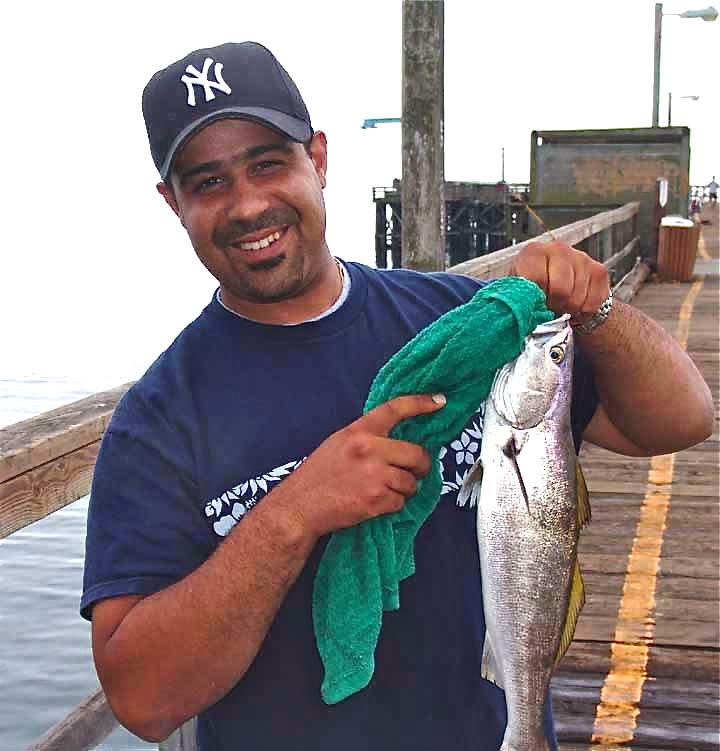 Food Value: Excellent, mild-flavored flesh that is firm in texture and low in fat content. The meat can be prepared in many ways. Unfortunately, the flesh tends to discolor rather rapidly which has created a limited market for the frozen form.

Comments:  Large white seabass are one of southern California’s top partyboat gamefish. Unfortunately, the numbers of these fish decreased markedly in the 1970s and 1980s. However, with an increased legal size, a decreased daily limit, and efforts by several groups to pen raise juvenile white seabass, a comeback is being made. It is important that all sportsman, and especially pier fishermen who catch the small illegal “seatrout” adhere to the existing laws. If so, large white seabass may once again be a common catch of pier fishermen and stories like the following may once again be recorded.

Biggest Run of Sea Trout, Bass at Pier in Years —One hundred fifty white sea bass in a single evening’s fishing from the Ocean Park Pier during the past week is positive proof of the biggest run of sea trout in years, reports Commodore Bob Oefinger. —Van Nuys News, June 14, 1934

Last week brought one bright spot to anglers, particularly those fishing the Santa Monica Bay. This was good pier fishing, and think of it, you old timers, white sea bass fishing at that. These conditions are likely to continue for some time. The pier fishing found many anglers on the job, particularly at Ocean Park. White sea bass, a misnomer by the way, the fish being officially considered a croaker, have been taking live bait, jigs and scooter lures. Anglers fishing from all piers in the Santa Monica Bay region have been having more or less success at these fish. Hundreds were caught… —Frank M. Bockway, Los Angeles Times, June 18, 1934 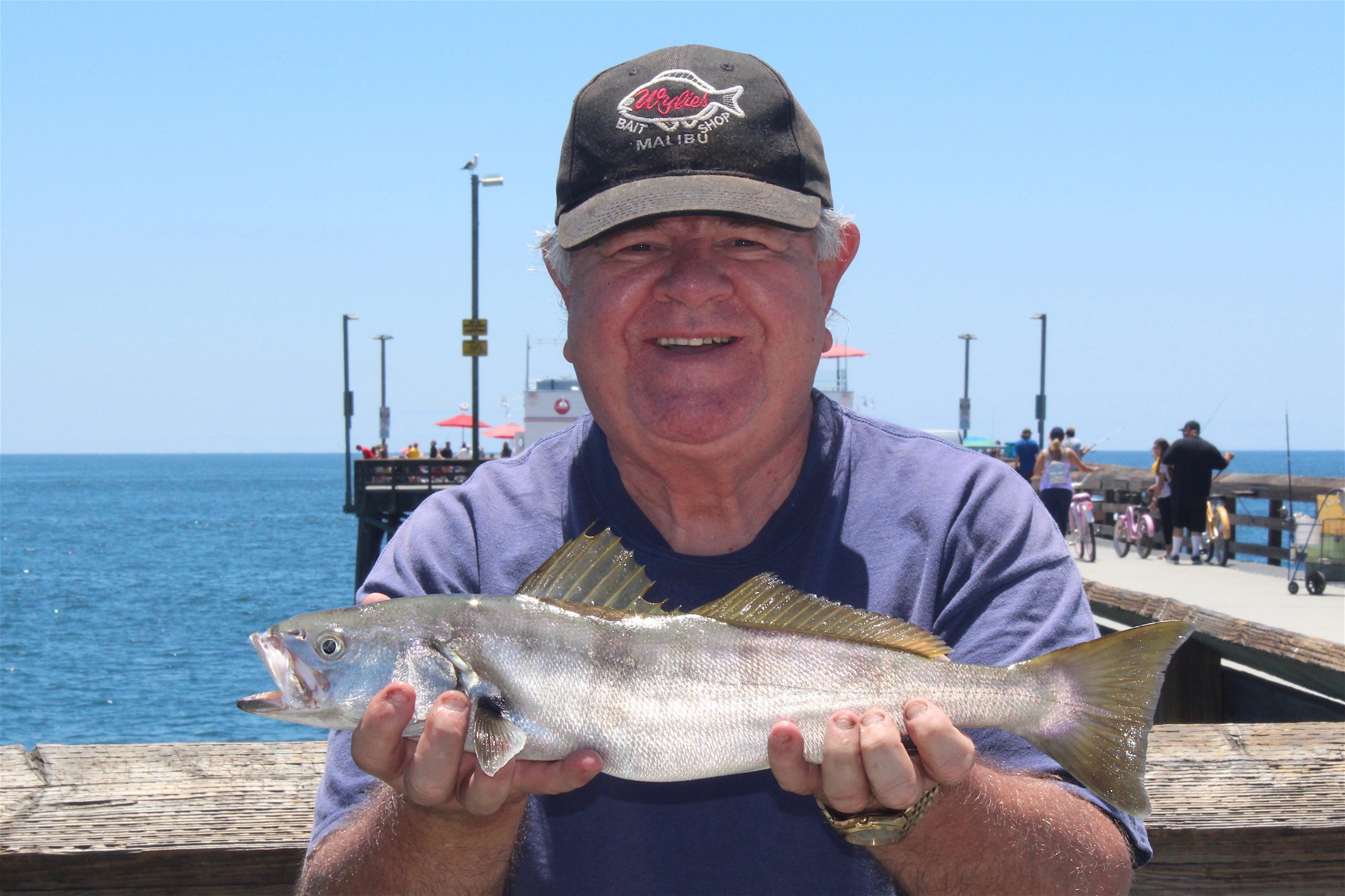 Ocean Park, July 17. (A. P.)—A one night’s catch of 600 white sea bass, known as the trout of the sea, was reported from the Ocean Park pier here today. It was the biggest run of the season for those who do their angling under the powerful spotlights.—Bakersfield Californian, July 17, 1934

White sea bass also visit certain piers at times, and heavy specimens are pulled up. An instance of this occurs at Newport, where during the dark of the moon in late spring these fish make nightly raids on the hopeless sardines quaking under the pier. Word of this situation drifts inland, and thongs of ardent anglers jam the pier from dusk until the wee hours of the morning, all bent on hanging up a few fine tasting lunkers… Sardines are obtained for bait by snatch-hooking them, and when impaled on 2/0 to 5/0 size hooks of O’Shaughnessy brand it seems that 15 to 20 pound bass are commonly duped into grabbing hold. Some even run as high as 50 pounds…and you can imagine the furor one of these babies creates among the pier fishermen!—Mortimer Norton, Pacific Coastal Fishing, 1950

Most piers, sooner or later, will have a super run of fish that will be forever etched in the minds of local anglers. Santa Monica, because of its location and size has had several of these. The most famous took place back in 1957 (some sources say 1959) when the waters around the pier were invaded by schools of marauding white seabass. They were in the deep waters of the pier, the mid-pier areas and even the surf. More important, they seemed to hit almost any bait or lure (although the regulars, who would snag a sardine and lower it to the water using a live bait leader, had the best success). Early morning and evening were the best times but fish hit all day. One single afternoon saw 200 of the fifteen to forty-two pound fish landed, and the run lasted for nearly two weeks.—PFIC

Many times pier fishermen seem to do better than the ones out in boats. At Santa Monica pier last fall, for instance, pier fishermen actually caught more white sea bass during the big run than party boats.—Pasadena Independent, June 9, 1960 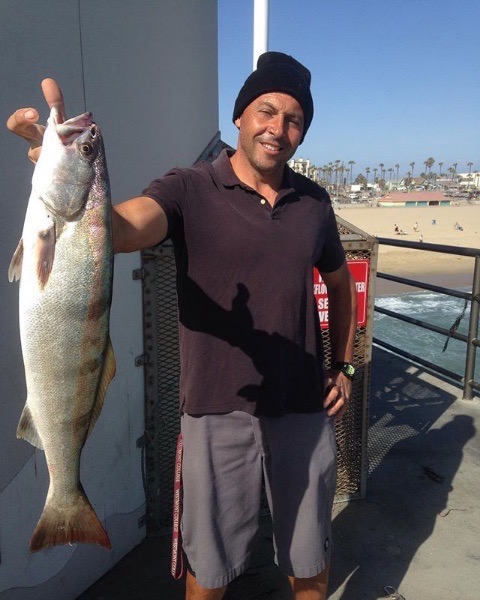 “Unofficial” records of large white seabass — Most, but not all, large white sea bass are taken from boats although a tremendous number were caught from the Ocean Park Pier and the Newport Pier in the ‘20s and ‘30s.