There was a time, in my lifetime no less, when things seemed much simpler and things could get done on a timely basis.  Those days seem over. This small pier is an example of the frustration that can sometimes overcome a project.

I first fished the pier in 1994 and found it to be an excellent pier for the rocky species I love, everything from perch, to cabezon, rockfish, greenling and even lingcod. Those who preferred to test the waters away from the pier reported huge rays and some big sharks.

By the late ‘90s the pier was showing need for repairs and in 2001 the pier was destroyed by a winter storm. The pier, or at least the remnants of the pier set as an eyesore for years in its location adjacent to the upscale Trident Restaurant.

Locals who had fished the pier grumbled and hoped for a new pier but not much happened. Finally, around 2012, people began to question if a new pier could be built. Eventually the Planning Commission took up the matter but in 2013 they turned the proposal down. However, the Sausalito City Council voted in 2014 to grant an appeal to that decision. In essence, they voted to approve the pier.

Plans had been developed for a small pier to be built at a cost of $160,000. Funds were to come from the 2007 Cosco Busan oil spill settlement and a grant from the National Fish and Wildlife Foundation.

There were conditions placed on the approval: (1) the upper level of the pier couldn’t be more than two and a half feet above the Bridgeway sidewalk (don’t interfere with the view), (2) a staircase with an ADA accessible ramp, and (3) a requirement to come in a year to see if the pier was causing any safety issues.

And that’s where it stands. The plans are there but not the pier.

According to sources that I contacted, the matter is currently like a political tennis match. Issues include the cost which is now estimated to be at least double the initial estimate (and the grant is no longer in existence). And, who is responsible for the pier. The city seems to think the Trident should be responsible while most people say it’s a municipal pier and the city is responsible.

It remains to be seen what will happen but we will keep our fingers crossed!  The following discusses the past and what we hope will be a future that includes a new pier. 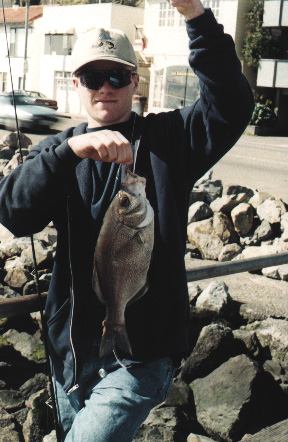 Good-sized rubberlip seaperch caught by one of my students in 1999.

On my last visit to the pier I found that it had been fenced off and many of the pilings were gone. It was quite a contrast to my first visit to the pier, a visit that produced a quick and positive evaluation and made it one of my favorite piers in the North Bay even though it was so small. My first drop on that first day  (using small hooks and pile worms for bait) saw a rugged two-pound cabezon grab the bait. Soon after that the cabezon was hanging on my stringer. The very next drop saw a three-quarter pound blackperch latch on to a hook. The next drop saw an identical twin. In the first twenty minutes I caught four perch, the cabezon, a half-pound brown rockfish, and a strange little onespot fringehead. Then the action slowed. But by then, I was hooked on the spot.

The little pier had hardly any facilities and often presented problems as far as parking. Nevertheless, it was heavily used, was quite productive, and was considered a public pier.  Being in Sausalito, it also happened to be located in one of the Bay Area’s main tourist centers and one of my favorite spots. Home to restaurants, art galleries and upscale tourist shops, Sausalito is also one of the best areas to view Angel Island, Alcatraz and The City (San Francisco). When combined with a Mediterranean-like setting, it is a beautiful area to visit.

Environment. The pier only extended out 73 feet from the rocky shoreline of Richardson Bay and downtown Sausalito. To the left, on the pier, was the Horizon (now Trident) Restaurant and Scoma’s Restaurant; to the right was a small area was reserved for fishing.

Pilings were covered with barnacles but few mussels. Because of the location, the main species of fish were rocky-shore species, especially several types of perch (primarily black, rubberlip, striped, rainbow, and white), cabezon (and smaller sculpins), small rockfish, kelp greenling (sea trout), a few small lingcod, and an occasional eel.

In addition, this was a good spot for jacksmelt. At times it was also possible to jig for herring as they came into the inshore bay waters to lay their eggs. Water depth was shallow, the bottom was primarily mud with rocks, and there was often considerable kelp by late summer.

Fishing was primarily limited to short casts parallel to the shoreline, diagonal casts out from the corner of the pier, or fishing under the pier. A screen had been erected near the front of the pier to prevent casts from crashing through the restaurant’s windows (and perhaps creating a truly unique bouillabaisse for a few unsuspecting customers).

Fishing Tips. The best bet here was to fish on the bottom with a high/low leader, small size 8-4 hooks, and pile worms, fresh mussels, small pieces of market shrimp or grass shrimp as bait. Knowledgeable anglers fished around the pilings or rocks and really had to watch their lines. Many of the rocky shore species have a habit of grabbing your bait and heading straight for a hole or crevice under a rock and if you gave the fish the chance to reach the rocks you might never see the fish.

Large striped bass and even larger white sturgeon are common to these waters but anglers had a better chance of both hooking them and landing them from several nearby shore areas. To some degree, the same can be said for bat rays, one of the most frequent targets for local anglers. Nighttime was by far the best time for these large brutes but anglers had to be prepared to lose a few mud marlin to the numerous pilings under and next to the pier.

Frequently, schools of jacksmelt will sweep into the waters adjacent to the seawall. When this happened, anglers would use a multi-hook leader with three size 8 hooks and bait each with a small piece of pile worm. The leader was fished under a float or large bobber and, if present, the jacksmelt would often provide some fast action.

During the winter, usually December to February, Pacific herring mass in the inshore areas around Sausalito. They lay eggs on pilings and rocks and provide a herring-egg fishery for many sportsman. They also provided a fishery for those who wanted to jig for the small fish. Generally, the best fishing time was two hours before and after the high tide when the fish moved in close to the shoreline. The best method was to use one of the standard bait-rig-leaders found at many tackle shops. Usually a shiny torpedo sinker was attached to the end of the leader and then the cast was made. A somewhat medium speed retrieve, with an occasional flick of the wrist, provided all the action needed to attract the fish. If present, it was not unusual to fill a bucket with the fish.

These herring spawns also attract large fish like sturgeon and sharks as well as the smaller jacksmelt (the billions of eggs act as a natural chum for the hungry jacksmelt) and sanddabs. Because too many sturgeon were being landed at such times, it is now illegal to catch sturgeon in this area during the winter months but the other species were fair game at the pier.

<*}}}}}}}}}>< — Some of the stories imbedded in the Pier Fishing in California Autobiography Page are true gems—hint, new section. The following comes from Black Marlin (Nate D) one of the original “Pier Rats” on the site. Most Memorable Pier Fishing Trips (and Why): “I’ve told this story before but here goes… One day I arrived at Horizon’s Pier about 6:30 A.M. The sun was just coming up and it was going to be a beautiful day. I was 12 or 13 years old. I baited up with squid and cast out. I picked up my bucket and started walking towards the shore to fill it with water when my Penn Long Beach began to sing. I set the hook and ran back to the rocks to fight the fish. I knew it was a huge ray. The fish and I battled back and forth for about 45 minutes. I got it close to the rocks and asked a jogger to hold my rod when I got it to the surface so I could land it. He was going to breakfast and couldn’t be bothered. ‘Besides,’ he said, ‘I think you’re snagged on the bottom.’ He ran off and the fish made another run. Sometime later he came jogging back, and I was still fighting this ray, exhausted. ‘Will you help me now?’ I pleaded. ‘Still fighting that bottomfish, eh kid?’ he replied. Just then the ray made another run and about 60 yards offshore it broke water and flew through the air like a rocket, splashing down and snapping my 40# mono like it was sewing thread. I have never seen a ray do that before or since. It was huge, it looked like a manta ray. The biggest ray I have ever seen to this day. I turned to the jogger and said ‘Did that look like a snag to you??!!!??’ and stormed off disgusted. He just stared at the spot where the ray had jumped for a long time, and then left.” 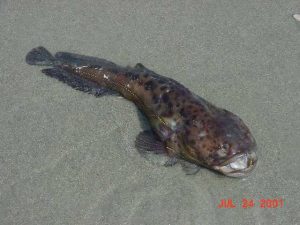 <*}}}}}}}}}>< — A local mystery, one that somehow seems apropos for an area like free-spirited Sausalito, was the story that made the Bay Area’s 11 o’clock news shows (and papers throughout the hinterland) back in 1985

That summer saw strange sounds coming from the inshore waters of San Francisco Bay. Residents of Sausalito, especially those ensconced in their houseboats atop the bay’s waters, were more than a little concerned.

Was it the military testing some sort of secret device (and obviously endangering the populace)? Could it be a foreign government? Did the Soviet Union have a secret sub checking out San Francisco Bay?

Perhaps it was aliens? Some sort of “New Age” warnings? Who could say? If it was ten years later it might be a case for Maulder and the X Files?

Although the mystery did involve midshipmen, it did not involve the military, or young Navy cadets hoping to be officers. These midshipmen were little fish, plainfin midshipman, a member of the toadfish family and most less than a foot long.

Apparently that humming and grunting is fairly loud if people onshore could hear it. Someone (obviously an elder) likened it to the drone of a B-29 bomber or a giant electric shaver.

But the mystery was solved. Not by Sherlock Holmes, Columbo or even Jessica Fletcher, it was solved by a group of volunteers from a local aquarium. Solving the mystery did not diminish the noise but at least it calmed the nerves of most Sausalito residents.

Of course I imagine there were some who felt it was a cover-up, a convenient way to blame helpless little fish for the secret tests still being conducted by a secret government program. Perhaps the code name for the nefarious program was “Midshipman?” Blaming the fish just seems so blasé.

How To Get There: Take Hy. 101 to the Alexander Avenue exit, turn right on Second Street and then right on Richardson Street.

Management: (If it is rebuilt) Sausalito Recreation Department.