Once you have some live bait use a Carolina-rigged leader with the live bait for the halibut, a slider rigging, or a two foot or so long leader tied up above the sinker (see the book Pier Fishing in California, The Basics). Traditionally the seats along the Monstad portion of the pier have been considered the prime halibut area, especially the inner portion of those seats. 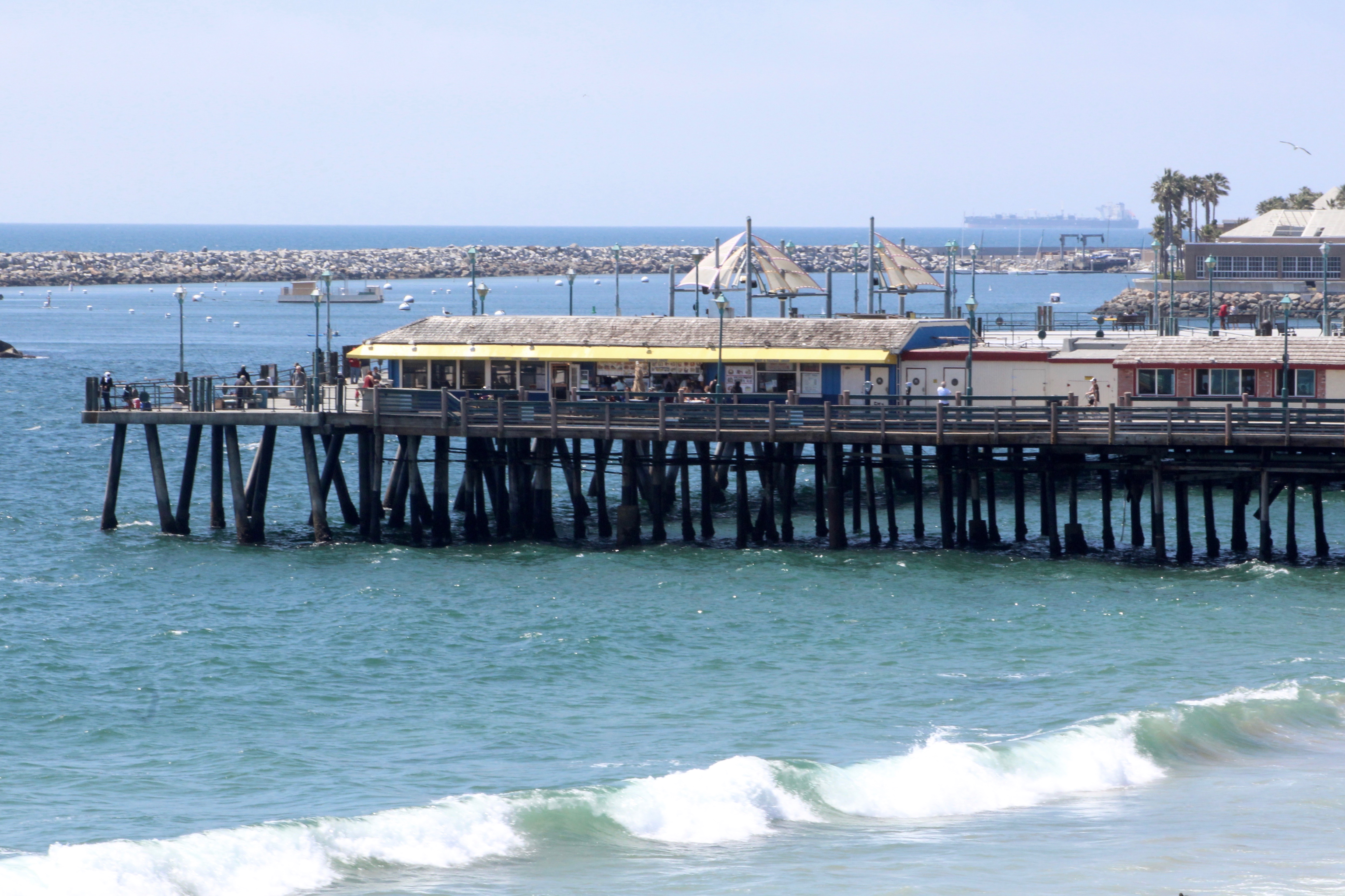 The Monstad section of the pier

Recently I ran across an article that discussed the Monstad section of the pier that pretty much confirmed what I already felt about the best area to fish on the pier. The nearly 40-year-old article also mentions the dilemma that still confronts “pier rats” and the cities that maintain the piers: the cost of the upkeep of the piers. How to balance the space needed by the fishermen versus providing space to businesses that can produce revenue for the upkeep of the pier. Without the money to maintain the pier there would be no pier and no one would be happy.

The Monstad and Municipal pier at Redondo Beach is the most visited coastal pier complex in California, according to Richard W. Parsons, harbor director.

For years, local fishermen have peacefully coexisted with commercial developers on the pier but a recent city revenue-producing proposal to build a restaurant on the south side of the Monstad pier has infuriated the rod-and-reelers.

“This is the best halibut fishing pier in the state,” contends Ray Amys, leader of a drive to stop approval of the restaurant in the Coastal Commission hearing.

The city proposes to relocate the fishermen to a 212-foot promenade joining the Monstad and Municipal (horseshoe) piers but fishermen scoff at the idea, saying that they won’t catch any halibut there, only much less desirable fish like perch, mackerel and bonito.

“People come from Long Beach, San Diego and all over the state,” Amys says. “On the Long Beach pier, it’s a big thing to catch a 14-pound halibut but here it’s an everyday occurrence,” George Whalen, fisherman from Long Beach, said offhandedly.

Fishermen who have been fishing the piers for decades say they have learned that one section on the south side of the Monstad pier is where the good fishing is. They’ve seen excursion boats go out near the pier and have seen they don’t catch fish.

There is scientific reason for it, according to Rimmon C. Fay, a controversial member of the Coastal Commission. “I know from firsthand experience diving down there that the Redondo submarine canyon comes into shore right along the south side of Monstad pier,” Fay explained.

People fishing on the end of the Monstad pier don’t catch fish like those on the south side, Fay said.

Wishing to maximize the city’s revenues, harbor director Parsons approached the State of California Wildlife Conservation Board about funds for construction of additions to the existing Redondo piers.

There is no environmental issue here, according to local fishermen. It is rather a classic confrontation over the access of low- and moderate-income people to coastal areas.

The pier is used by fishermen who don’t have money to go out on boats and fishermen do not generate revenues for the city while the developers do produce revenue, Fay explained.

Estimated to cost $300,000, the proposed fishing promenade would join the Monstad and horseshoe piers, giving an additional 400 feet of fishing rail space…

It is common knowledge among fishermen that live bait, specifically anchovies, are needed to catch halibut. The developers and the city say that a 30-foot open platform will be provided for the bait boat to land but bait boat operator says “no way.”

“The plans call for me landing 100 feet behind where I do now—the water is too shallow—I would run aground. I’m not going to risk a $200,000 boat going in there,” Myers said flatly. Myers said the developers don‘t realize how much water bait boast draw when they’re full.

Compounding the problem, the boat would have to land in ocean swells between the two buildings, Myers added, “Without live bait, the pier would be dead, “Myers affirms…

The fishermen argue that the retail complex will destroy the view to seaward, while the city and developers say that will be more than offset by the new vistas created by the proposed promenade.

The fishermen have rallied around a statement by former Coastal Commission member Fay, who said “you can put a restaurant any place but you can only catch fish in the ocean.

Responding to the pressure, the city presently has a consulting engineer studying the feasibility of constructing a low-level fishing rail below the proposed restaurant on the south side of the Monstad pier.

Harbor director Parsons feels that the whole controversy is ironic because progress is part of the reason a lot of fish are attracted to King Harbor. Through offshore conduits, Southern California Edison absorbs water, filters it before using it and discharges it back into the ocean cleaner than it was before, Parsons explains.

Parsons said that pier structures are expensive to maintain. In an average year, it costs about $150,000 to maintain the two Redondo Beach piers, not counting extra expenses like the $300,000 the city spent for a 10-inch fire main.

Because the water in the harbor has gotten cleaner, a termite, which cannot survive in dirty water is thriving, attacking pilings, each of which costs $5,000 to replace. “The fishermen want us to leave the pier alone but if we do, it will be condemned,” Parsons said. The nearby Bounty restaurant structure has already been condemned.

Amys expects to have 5,000 signatures by the time the Coastal Commission hearing takes place. Pollack explains that the master lease agreements include provisions that 50% of the retail space remain open for fishing. 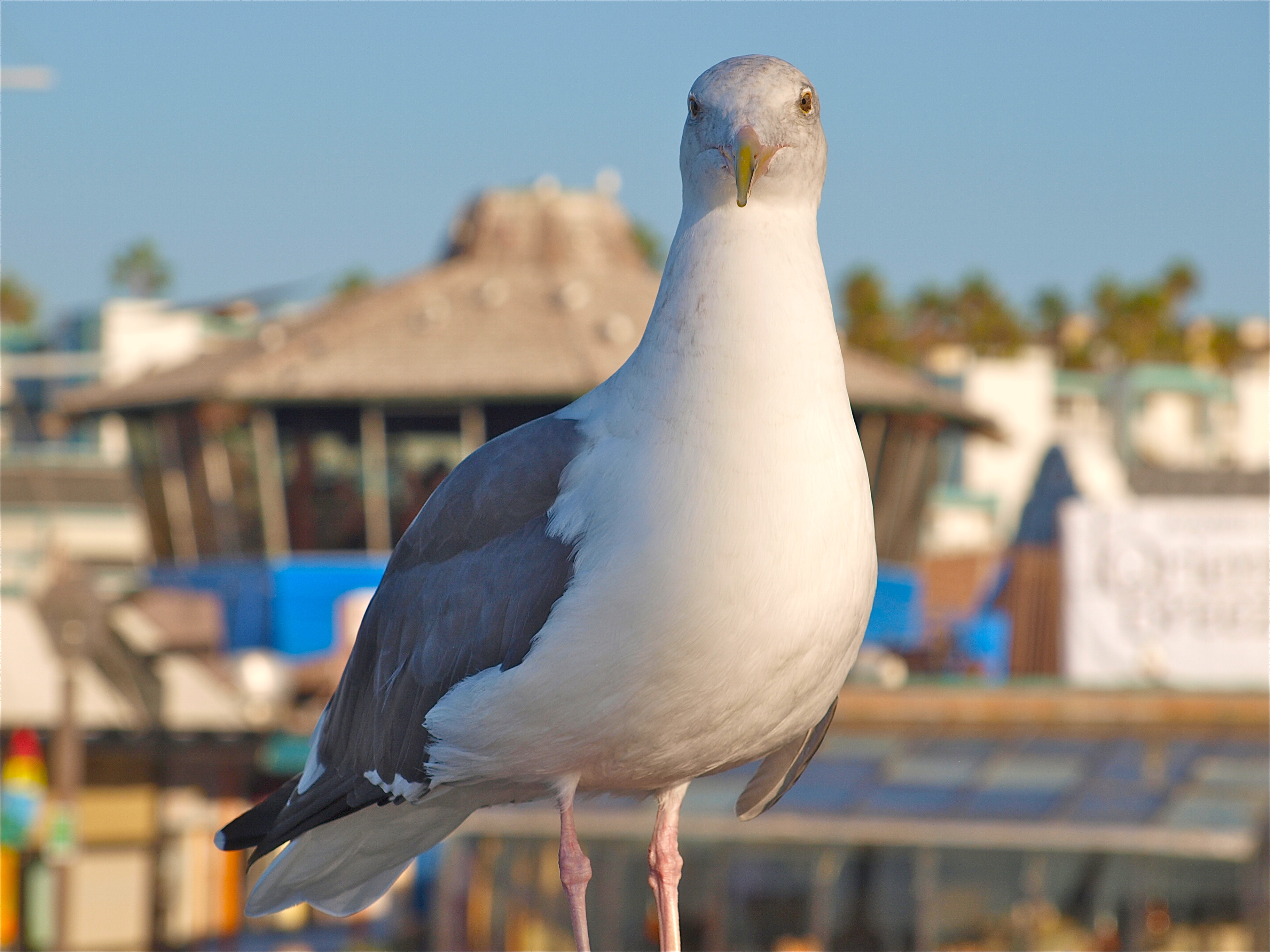 I assume the anglers won that round since Tony’s Restaurant still sits on a wing of the horseshoe pier. But their victory would be short lived. Winter storms in 1983 destroyed much of the end of the pier (less than four years after the fight and article). Five years later, in 1988, winter storms in January and February combined with a disastrous fire in May, devastated the entire pier. A new pier would rise like a Phoenix from the ashes but it would not open until 1995, seven years later. And today, even though the Monstad section is still available, live bait isn’t — and the number of halibut are far down.

Nevertheless, the following articles give further evidence that halibut have long been the prize fish at the pier. However, the first article, from 1975, is not accurate as far as the fish being a record (at that time). A 62 ¼ lb. halibut was caught at the Los Angeles Long Wharf in August 1917, a 54-pound fish at the Huntington Beach Pier in 1939, and a 45 ¾ lb. halibut was caught from the Balboa Pier in May of 1927. It does show though that some big “barndoor” halibut were found at Redondo. The next two articles show that halibut were often the derby winners (although sharks and rays were generally excluded from the derbies).

A Los Angeles County woman landed a 45 ½-pound California halibut at Redondo Beach pier June 24, to narrowly miss the state hook and line record by a little more than a pound.

Nevertheless, it was the largest halibut ever taken from a pier, and Virginia Lively of Carson has entered her “barn door” in the Fish and Game Commission’s annual trophy awards program.

The state record is a 46-pound 8-ounce halibut taken off Santa Cruz Island on March 31, 1974 by Ron Buhr of Santa Ana.

Mrs. Lively, a veteran angler, used a No. 1 hook on a 10 pound test line to land her catch at about 9:45 a.m. It took her about 10 minutes to get the fish up on the pier. She used a live anchovy. The halibut measured 45 ½ inches in length, and marine biologists estimated its age at between 13 and 17 years old. The largest California halibut ever verified by the DFG was a 51.375 pounder taken by a South Gate spear-fisherman in the late 1950s.

The Sgt. Randy Martin Awards ceremony was held Thursday on the Redondo Monstead pier and, with the end of the tournament, halibut in particular may have felt that the 126 entrants in the third annual event had declared a cease-fire.

First place went to Hasid Homas of Redondo Beach for his 16-pound, 6-ounce halibut caught on the first day, which rewarded him with a trophy, a complete fishing outfit and a jacket.

Second-place winner was Jerry Dunamac of Wilmington for his 16-pound, 3-ounce halibut. Dunamac received a trophy and tackle.

Charlie Middleton, 91, of Redondo Beach was the oldest fisherman and received a rod and reel. Middleton said he fishes 300 days a year and he is concerned about the crowded condition on the pier since the front section that was destroyed by fire has not been replaced.

A large fish cleaning sink sits in the Monstad section

Inshore fish. Of course there are other fish than mackerel and halibut at the pier. Anglers casting back toward the shoreline from the end section, or better yet, fishing on the diagonal legs of the municipal pier, can fish the shallower, inshore water. Yellowfin croaker are often available and a few spotfin croaker and corbina might show up. If fishing at night, you might see an occasional black (China) croaker. Young white seabass (sea trout) may show up in the spring but their numbers are rarely high.

All of the croaker will hit on high/low riggings baited with seaworms (bloodworms or lugworms), fresh mussels, ghost shrimp (if you can find them), or small pieces of market shrimp.

The large schools of the smaller croakers—queenfish (herring) and white croaker (tomcod) do not seem to be present here as at the more surf-oriented piers. Nevertheless some may be taken.

The white croaker will hit a piece of bloodworm or lugworm fished on the bottom on a high/low rigging with size 6-4 hooks. The queenfish can hit on the same rigging but are more commonly taken on small-hook bait rigs jigged mid-depth in a simple up and down motion. For the queenfish, drop to the bottom and if no bites are happening bring it up a foot. Repeat until you find the schools (and usually they are halfway to the bottom).

You may also see schools of salema which prefer the same water depth as the queenfish, like the same baits and, like queenfish, are often far more ready to hit at night than during the day.