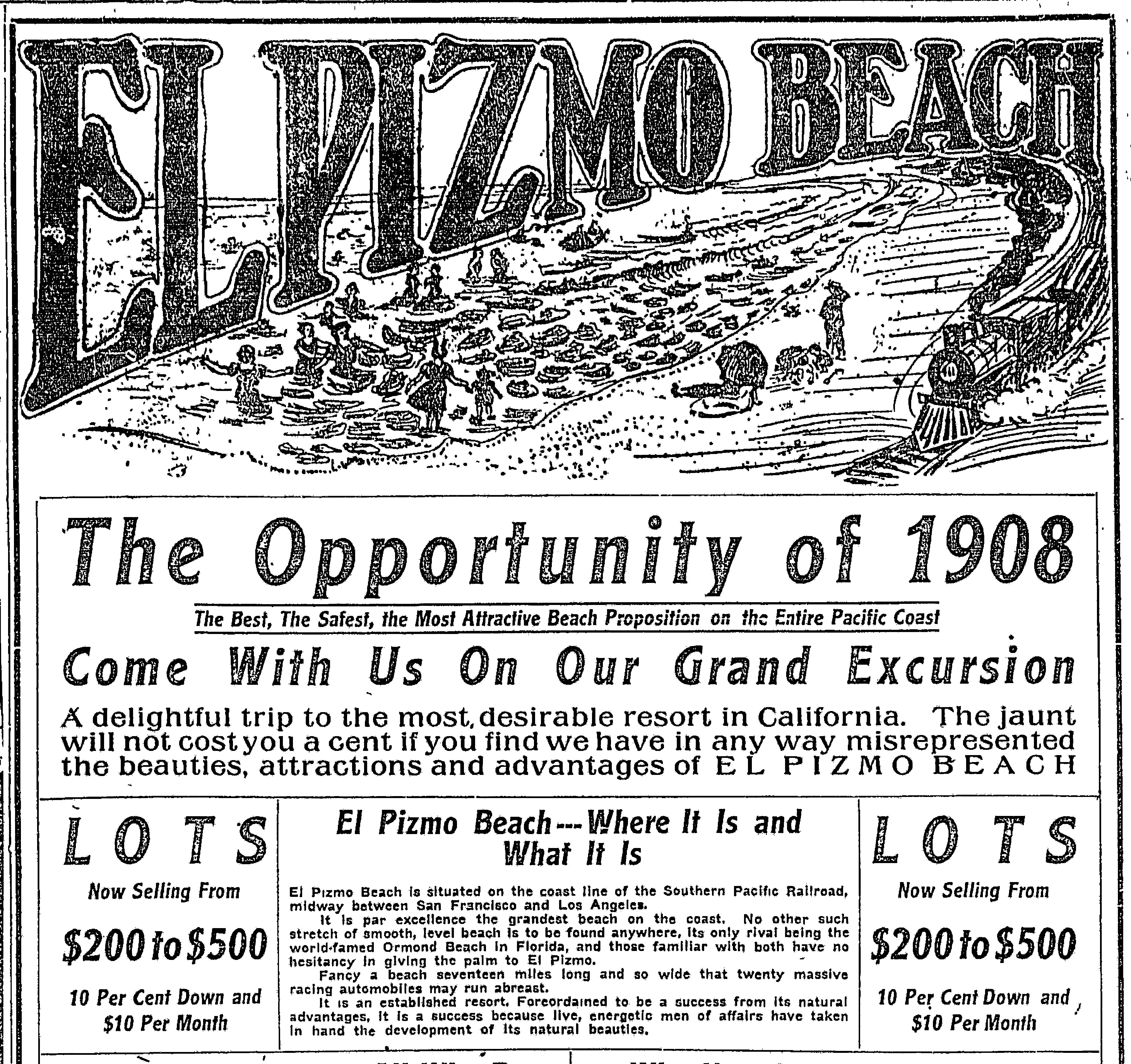 “Port Harford is the well-protected harbour of San Luis.  A short rail line and the Camino Real run to it.  A little way south is Pizmo Beach, which is an extraordinary floor of hard-packed sand extending for 20 miles between long rocky arms… In winter it is as lonely as it is vast and sonorous with the boom of the surf. But summer finds it alive with throngs who dwell for the most part in tents and cottages, and consume with limitless appetite the fine-flavoured clams of this strand. Over the firm shining track, many fast motor-races are run.—Ruth Kedzie Wood, The Tourist’s California, 1915 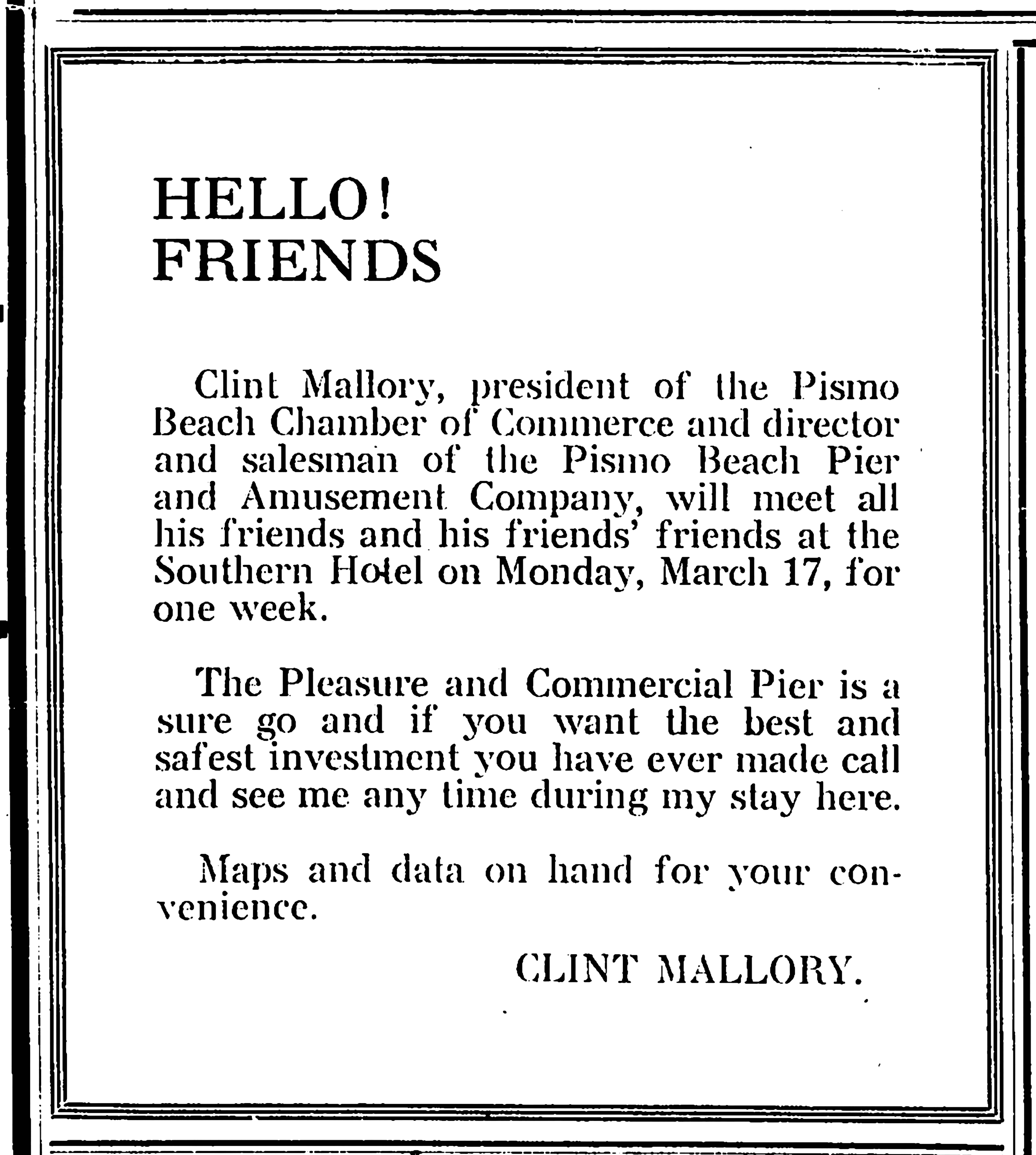 An advertisement in the Bakersfield Californian — March 14, 1924

A new, longer and wider wharf was built in 1924 but, like most wharves and piers, suffered sporadic damage from the elements. 500 feet at the end of the wharf was lost in a storm shortly after it was built. Additional damage took place in 1952.

Pismo Beach, San Luis Obispo Co., March 15.—County employees today worked in rain and wind to salvage materials from the wreckage caused to the 1,200 foot pier during the storm last night and early this morning. The damage to the pier was estimated at more than $25,000.

Chief of Police Amos Dana reported that about 150 feet of the portion of the pier which extends farthest into the water was knocked down by a heavy sea whipped by high winds. Crews were busy with trucks picking up huge pilings which had been knocked out from under the pier and cast up on the beach. The pier broke off just beyond the bait concession house, Dana said, and no one was on it at the time.

Repairs were made and fishermen continued to catch fish: “There is one item from Pismo Beach: Pier fishermen have been taking a fair number of salmon.” — Fresno Bee-Republican, October 4, 1968

That storm was mild compared to the El Niño storms of 1983 that necessitated a total rebuild, work that was started in 1985. Money came from the City of Pismo Beach, the Wildlife Conservation Board, the Coastal Conservancy, and FEMA. The pier reopened in 1988 and seemed one of the best built and most visited piers along the central coast until 2016 when the city decided the pier needed rehabilitation. 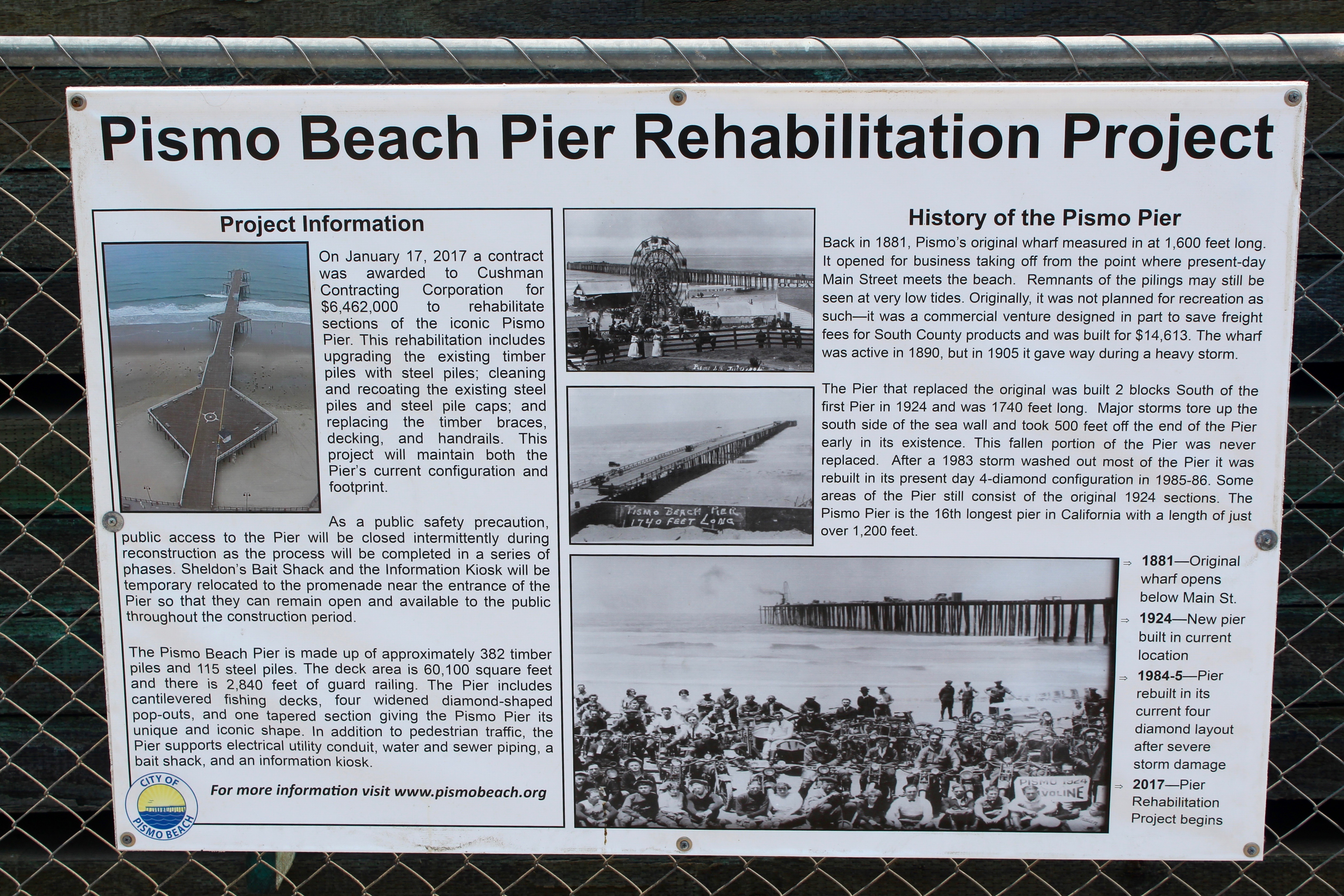 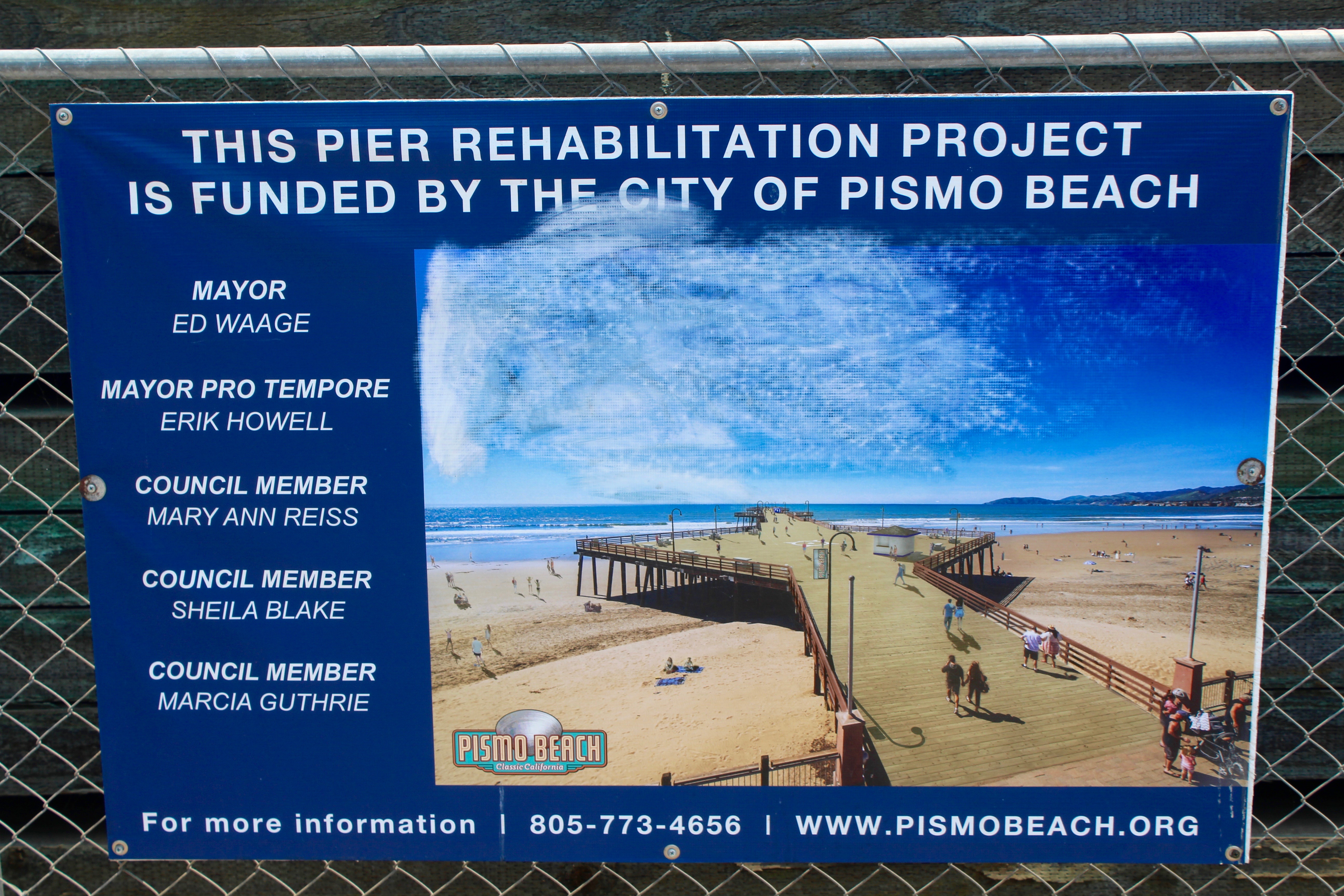 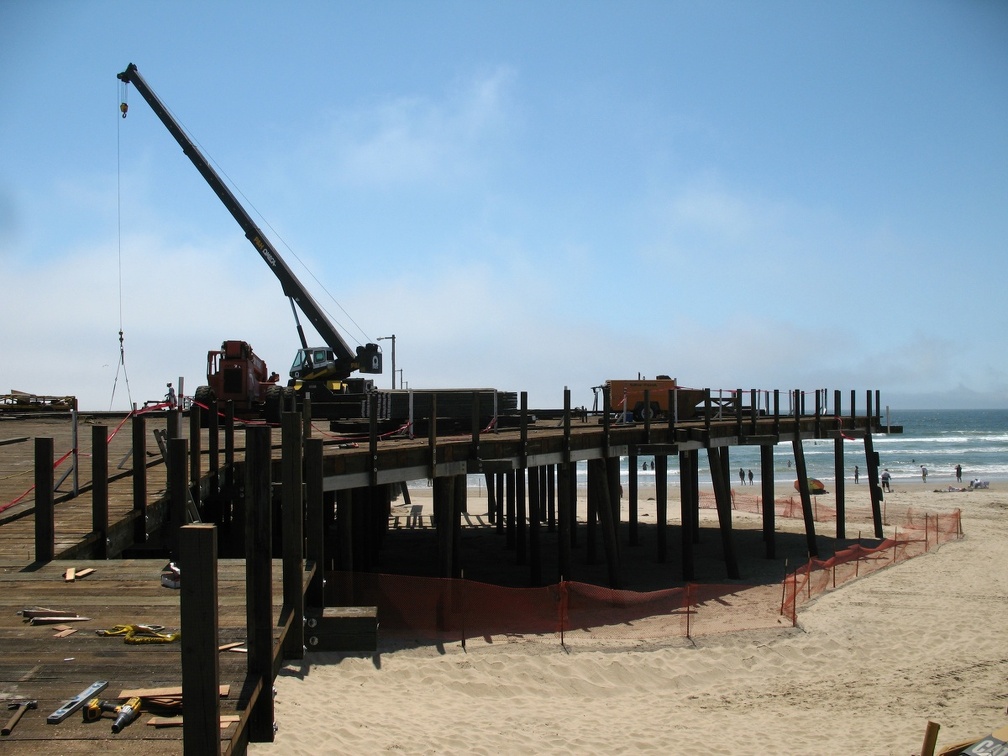 The pier reopened on October 20, 2018 far ahead of schedule and under budget (which seems unheard of today). The beautiful new pier was quickly engulfed by visitors, locals and anglers ready to wet a line after their forced absence. 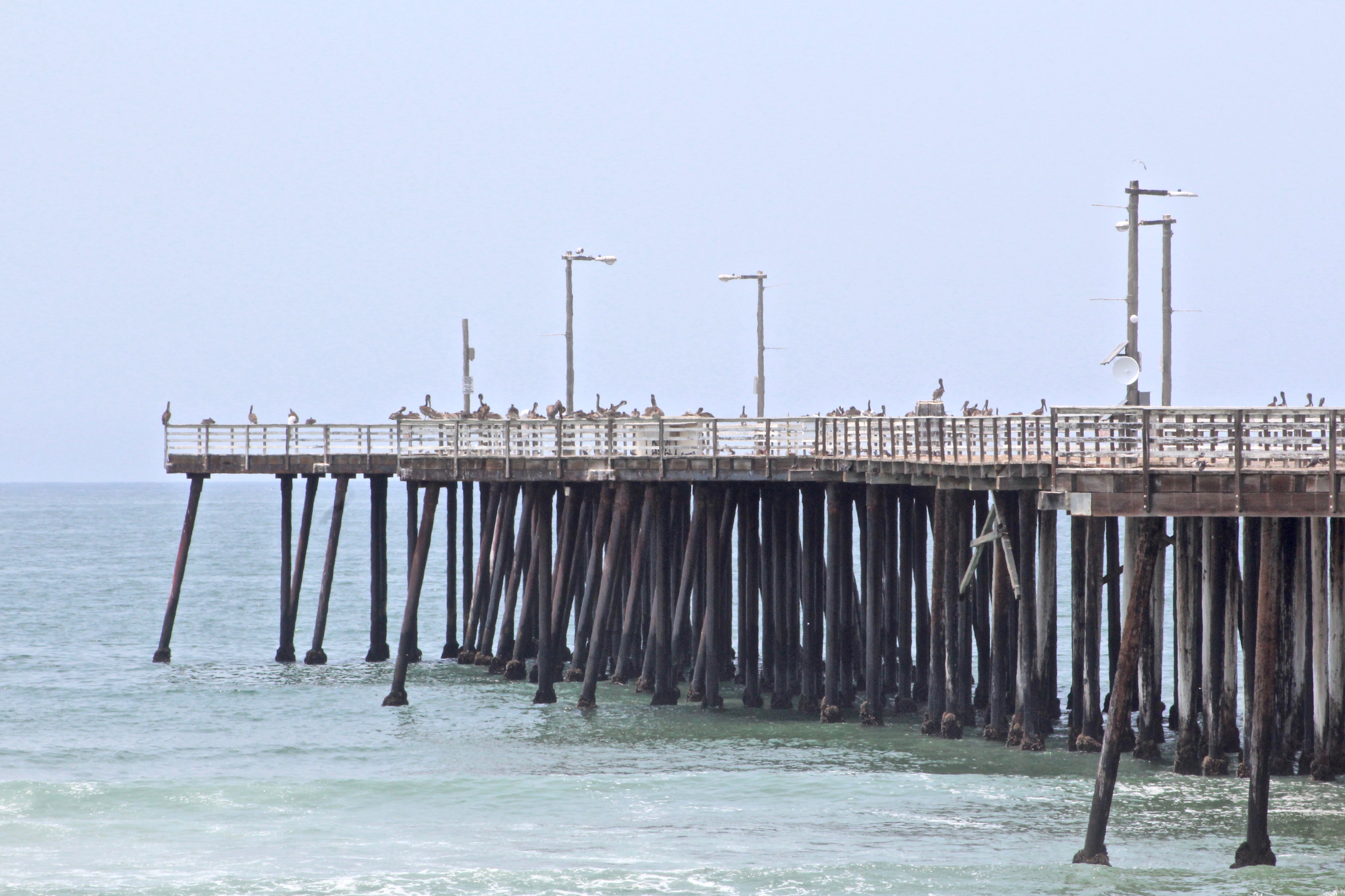 During reconstruction the sea gulls and pelicans had the pier for their home. Of course there was no bait or hooked fish to steal for food. 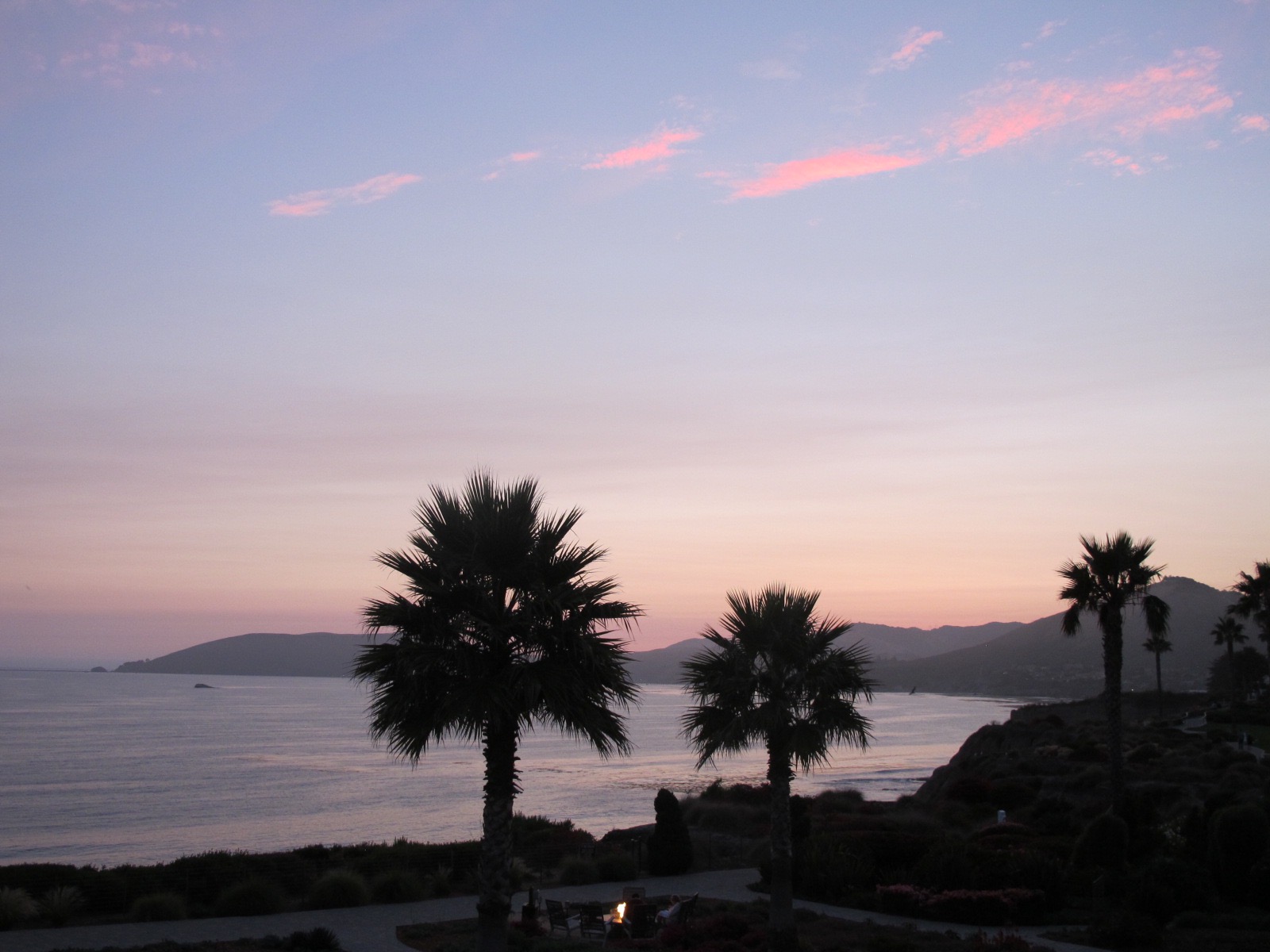 Facilities: Restrooms and free parking is available at the foot of the pier. The signs indicate a 4-hour limit from 9 a.m. to 6 p.m. and no parking from 11 p.m. to 4 a.m. Fish-cleaning stations, benches, lights, bait (primarily frozen) and tackle are available on the pier. Some food is also available at the pier bait and tackle shop.

Handicapped Facilities: Handicapped parking and restrooms. The surface is wood planking and the railing is 42 inches high. Posted for handicapped.