Species: Citharichthys sordidus (Girard, 1854); from the Greek word citharichthys (a fish that lies on its ribs or side) and the Latin word sordidus (sordid or dull-colored). Listed as Orthopsetta sordida in Fish Bulletin #28.

Identification: This is the largest of the sanddabs and a left-eyed flatfish. They have a small mouth, unmarked fins, and a pectoral fin on the eyed side that is shorter than the head. Their coloring is generally light brown with yellow and orange mottling.

Size: To 18.9 inches and around two pounds; most caught from piers are under a foot in length. 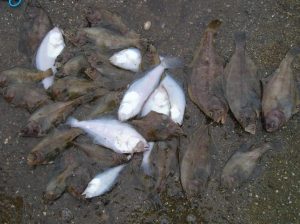 Shoreline: An occasional catch from the shore in San Francisco Bay.

Boats: An increasingly important species as the number of other California fish dwindle and regulations change. Common in some Central California areas during the wintertime months (a time that rockfish cannot be taken) are combination crab-sanddab trips. Anglers load up on sanddabs before the boats head to their crab pots, pull them, and hopefully bring up a good number of crabs. In the Monterey area, bottom fishing boats will sometimes fish for sanddabs at the start of the trip to use for live bait for lingcod.

Bait and Tackle: Pacific sanddab can be taken on light to medium tackle baited with small hooks, generally size 8 or 6. When sanddab are present, almost any type of outfit will work. Most anglers catch them on high/low leaders, but snag-line-type leaders made up with four to six small hooks can be deadly; at times every cast will produce four to six fish, the only limiting factor being the number of hooks (a limit of three in San Francisco Bay). The bait can be almost anything but strips of squid stay on the hook the best.

Food Value: Excellent! Pacific sanddab are mild in flavor, soft in texture, and low in fat content. They are best prepared as a pan-fried or baked delicacy. The meat is delicious. When I used to work in the corporate world, I would sometimes go to the venerable Tadich Grill in the heart of San Francisco’s financial district (the Wall Street of the West) just so I could have their sanddab. The Tadich Grill is the oldest restaurant in San Francisco (it was opened in 1873), it’s devoted to fish, and the cooks know how to perfectly prepare sanddab since it’s one of their specialties. A plate covered with a pan-fried sanddab, a side plate of fresh green beans, and a glass of white wine; what more do you need?

Comments: Several times when fishing at the Pacifica Pier during the ’70s, I witnessed phenomenal catches of Pacific sanddabs. Generally this happened during the winter when the waves and wind looked like they would stop any fishing. As a rule, the fish would strike every hook and people would land two or more fish every cast. However, at times it would just be for a couple of hours at dawn, as soon as the sun was fully out, the sanddab would quit hitting. Since then, I’ve learned that these wintertime runs occur every few years (but especially in wet-winter years). In 1997, the sanddabs showed up toward the end of November at Pacifica. Soon there were reports of sanddabs at the Fort Baker Pier and Fort Point Pier, both located just inside the entrance to San Francisco Bay, and at the Muni Pier and Fort Mason Piers along the San Francisco waterfront. Next there were reports of sanddabs at the Paradise Beach Pier and the McNear Beach Pier, the latter just past the San Rafael Bridge in San Pablo Bay. The 6-12 inch fish seemed to blanket the bay bottom. The run lasted for over a month and thousands of eager little fish sacrificed their lives so that anglers would be able to enjoy some fresh fish for the holidays. Anglers were able to catch as many fish as they wished. The only limiting factor was the time they spent fishing, the number of hooks on their line, and the almost inevitable boredom; it was simply too easy! Unfortunately some anglers reported catches of hundreds of fish and the word EXCESS became slightly redundant. Why the fish were in the area has never been answered but if past records are an indicator it will happen again and again. Those that avoid an angler’s hook, or a commercial fisherman’s net, may live to about 13 years of age.