Fishing is a mystery. When we were little, my friend, Gonzalez and I used to spend hours on the Manhattan Beach Pier with our fishing poles leaning over the rail and gazing into the deep water.

I guess most of the mystery was being unable to see what was going on beneath the surface of the dark water. For all you know, just at that moment when you were standing sleepily in the afternoon sun, sun huge unknown species of fish that had strayed in from the South Seas might be sniffing at your bait, about to bite.

Mostly, all we caught then were little perch, tiny sand dabs, herring and an occasional tom cod, but the feeling was always there that perhaps the next cast would bring some surprising catch.

A lot of people must have shared that feeling because on the pier they had a large round net which for a quarter (perhaps a dime) you were allowed to drop into the water and then pull up. You could keep whatever you caught in the net, be it a small fish, a crab, or only a clump of seaweed and tar.

Sometimes there were surprises on the pier… I recalled the time that a fisherman astounded everyone by catching a silver salmon right off the end of the pier… We were always waiting for someone to hook some bizarre sea monster, and sometimes they did. I’ll never forget the huge angel shark that I saw one afternoon gasping on the hot concrete, its jaws, with teeth as big as a man’s, working spasmodically.

There were always a lot of characters on the pier like the determined old men who devoted themselves to catching halibut. They all knew each other and they’d sit and talk for hours about old times. — The Santa Clarita Signal, February 10, 1971

In 1897 the Potencia Company was incorporated to develop land in the area and that name appeared on the Santa Fe schedule of stops. They proposed a seaside resort with wharves and piers. They originally called the land Potencia (in reference to potential in Spanish), but by 1902 it had become Shore Acres (with a new sign by the tracks).

Just one year later it became Manhattan after a coin flip between two of the town’s biggest developers. George Peck, who was calling his development Shore Acres after the Santa Fe junction sign, and John (Stewart) Merrill who was calling his area Manhattan after his hometown, agreed that a single name would be less confusing in attracting buyers to the area. They flipped a half dollar coin, Merrill won, and the area became Manhattan. Soon after the railroad changed the junction name once again, this time to Manhattan.

Most thereafter referred to the area as Manhattan Beach and that was the official name on the incorporation papers in 1912. However, papers sent to the postal authorities in Washington D.C. apparently only listed the name Manhattan and it wasn’t corrected until 1927.

The city’s first pleasure pier was built at the foot of Center Street in 1900. It was 900-foot-long and called the “Old Iron Pier” because it was built from used railroad ties; three rails would be criss-crossed and connected together before being pounded into the sand. Up above was a narrow wooden deck. A feature of the pier, for a time, was a wave machine designed to generate electricity from the action of the waves—the Wright Wave Motor—and it seemed to work. Unfortunately, the narrow pier was destroyed by the winter storms of 1913 and the wave machine lies buried under the sand at the foot of the current pier.

From the earliest days, but especially after the arrival of the Pacific Electric Railway’s “Big Red Cars” in 1903, tourism was an important industry to the city. Daily the Pacific Electric offered up the “Balloon Trip” from Los Angels. Cars (hopefully) filled with beach goers would head down to the beach at Santa Monica before visiting the new towns of Venice, Manhattan Beach and Hermosa Beach. The cars ended their littoral route at Redondo Beach before turning inland and returning to LA via Culver City. 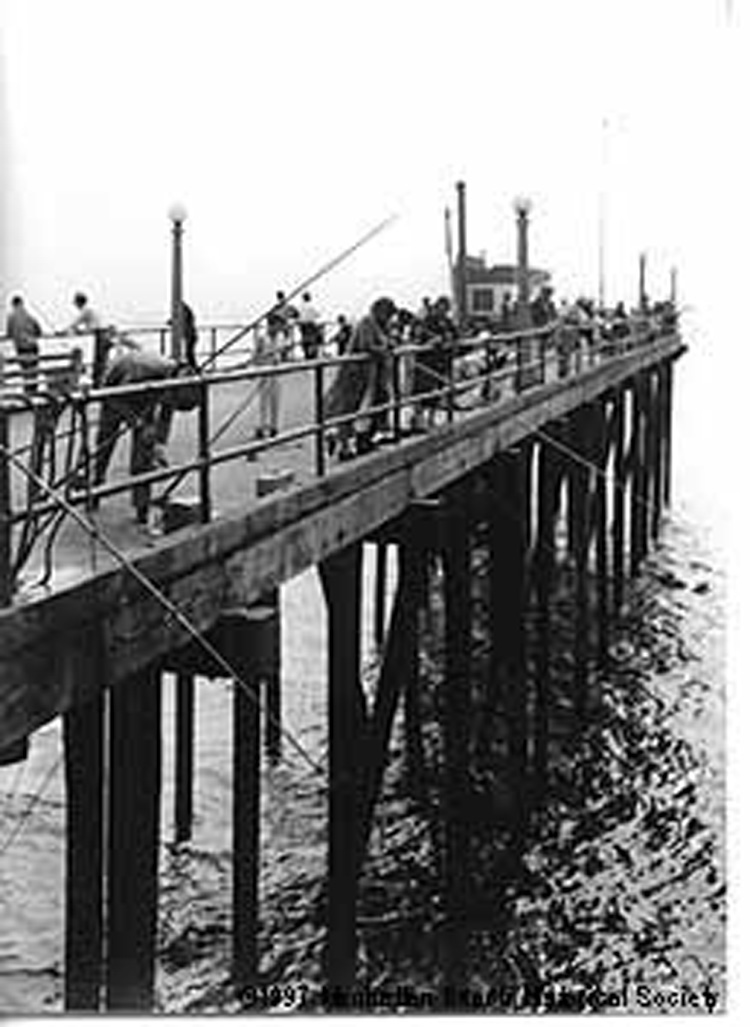 Of course every beach city needed a pier to keep the visitors happy but after the 1913 storm there was only sand, waves and broken pilings. So, in 1914 the Manhattan Beach Pier and Beach Association was formed and by 1916 voters had approved $70,000 for a new pier at Center Street and a $20,000 pavilion to be built at Marine Avenue. Two years later, Engineer A.L. Harris proposed a round end to the pier. He felt the round end would lessen damage from the waves. He said, somewhat awkwardly, “it is a feature that hasn’t been seen or yet brought out on any other pier along the coast…and it is much stronger against the action of waves…the fewer piles it has the better to get hold of them.”           The contract for a 922-foot-long pier with four sun parlors at the lands end was awarded in 1917 but, for a variety of reasons (including WWI, the rising cost of lumber, and damaging winter storms), the pier wasn’t finished until 1920. The grand opening was on July 5, 1920, amid festivities that included a band concert and a parade. Large banners proclaimed “Welcome, Frolic, Happiness and Hail.”

In 1921 a pavilion (roundhouse) at the ocean end of the pier was completed. Architecture included a Spanish tile roof and large gooseneck reflectors to light up the building. The goal was to present a shining symbol of the city whether seen from the shore or from miles out at sea. Its grand opening was July 4, 1922. The pavilion contained a restaurant and a bait and tackle shop. 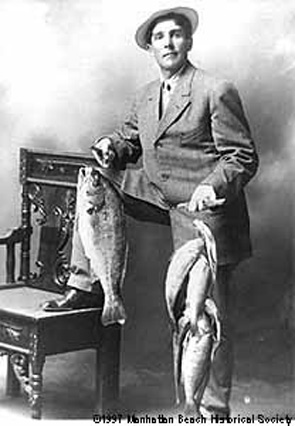 The Roaring ‘20s seem to have been the time for the capture of big fish from the pier. May 15, 1922 saw the capture of a 351-pound black (giant) sea bass at the pier by C.C. Campus. That pier-record fish was eclipsed the next year when an angler caught a 428-pound bass. It’s also reported that a 600-pound bass was caught from the pier in 1929 but I haven’t been able to get any more specifics.

In 1928 the pier was extended out 200 feet (at no cost to the city) when a Captain Larsen of Redondo Beach offered to pay for an extension in exchange for the rights to run a shoreboat between the pier and his barge Georgina (which was joined by the Irene in the ’30s). On January 9, 1940, the pier suffered major damage during a winter storm; 90 feet of the extension was ripped away. The extension was never repaired and the remaining section was swept away in February of 1941.

In 1946 the pier and adjoining beach were deeded over from the city of Manhattan Beach to the state. During the next four decades the pier would remain a focus of beachfront activity. But the ravages of Mother Nature and old age cannot be denied. In 1956 the pier underwent one reconstruction and then, in 1980 followed storm damage, further work was needed. By the late ’80s, the pier was in sad shape and the renovation, already detailed above, would begin. As mentioned, local citizens worked to recreate the feel and look of the 1920 pier including the roundhouse at the end and the unique lights.

Today the pier is perhaps the town’s most important icon, it’s considered to be the oldest standing cement pier on the coast, and it’s been declared a state historic landmark (Monument No. 1018, Manhattan Beach State Pier). 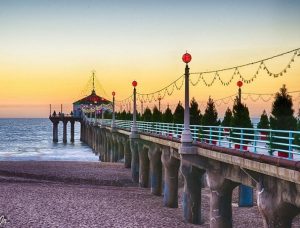 Facilities: Some lights, fish-cleaning stations, benches and restrooms on the pier. Some years there is a bait and tackle shop on the pier and some years there isn’t. Currently there is a snack bar out toward the end which also carries a little frozen bait. Metered parking is available on adjacent streets at a cost of $.25 an hour. There is also a beachfront parking lot that costs $.75 an hour and which has a 5-hour maximum time; it is closed from 9:30 P.M. to 4 A.M. As mentioned, parking can be hard to find during the summer, especially on weekends or during hot spells of weather.

Handicapped Facilities: Handicapped parking near the pier but non-handicapped restrooms. The pier surface is cement and the rail height is 36 inches. Posted for handicapped.

How To Get There: From Sepulveda Boulevard turn west on Manhattan Beach Drive and follow it to the pier.

Management: County of Los Angeles, Department of Beaches and Harbors.